The Fabulous House Of Mr. Fox 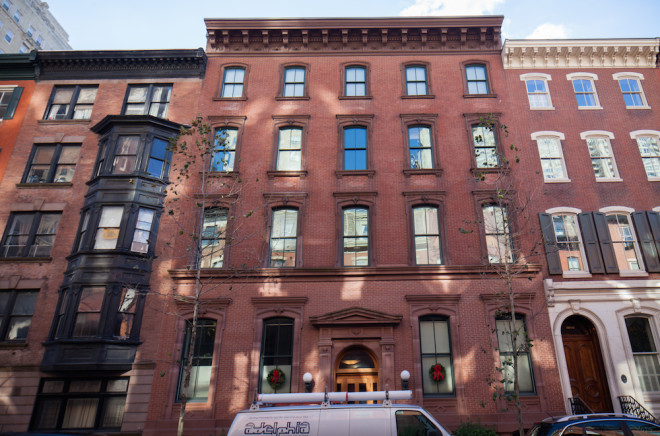 Spruce Street keeps it classy from river to river. The 1900 block is especially fine. Houses include the big and boxy Fox-Henry mansion | Photo: Michael Bixler

The neighborhood surrounding Rittenhouse Square is rife with interesting old buildings that used to be single family homes. A few stand out due to their many uses and fascinating former occupants. The double wide dwelling at 1906-08 Spruce Street is one such specimen.

Before builders put up grand row houses on the 1900 block of Spruce Street, the block was the location of the Howell & Brothers wallpaper mill. The company claimed to be the largest of its kind in the world. Operations moved to Washington Avenue in 1866. Howell & Brothers built a large, L-shaped factory that later became the Frankford Cholocate Works. (A consortium of real estate investors purchased the factory in November with plans for residential and retail redevelopment.)

Howell & Brothers’ departure from Spruce Street left a large empty plot of land in a quickly-developing neighborhood. The company subdivided and sold all the lots that made up the old wallpaper factory space. Concerned about the future of the neighborhood, the Howell family created restrictions on what could be built on the parcels with an emphasis on how construction on the lots met with Howell Street (now Delancey Place) along their rear. 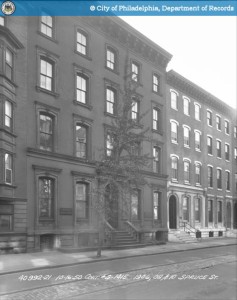 The construction date for the generous, double-wide house at 1906-08 Spruce Street is unknown, however it was already built and occupied by 1875. The architect is unknown.

The first owner and occupant of the mansion was Prussian-born Henry C. Fox. He came to America in 1835 and made it his business to learn everything there is to know about glass manufacturing. In 1853, he arrived in Philadelphia and established H.C. Fox & Sons Inc., a glass manufacturer that specialized in glass bottles. The company’s glassworks was located at the northeast corner of Schuylkill Avenue and Catharine Street. Fox retired in 1885 and handed over the family business to his sons. He died in his Spruce Street mansion on March 1st, 1910 at age 90. H.C. Fox & Sons Inc. stayed in business until the 1920s.

Esteemed physician John Norman Henry bought the house and installed his office on the first floor. Known as an authority on internal medicine, Henry wrote A Nurse’s Handbook on Medicine and published many case studies. Mary Gibson Henry, his wife, an adventurer and pioneering botanist, was, however, the most notable occupant of the Fox-Henry mansion.

Mary Gibson Henry was a lover of the outdoors and especially interested in rare flowers and plants that could not be acquired commercially. She turned the very long backyard space of 1906-08 Spruce Street into a large garden accompanied by a greenhouse. In 1927, the Henrys purchased a 95-acre farm in Gladwyne and made it their primary residence, while keeping the Spruce Street house as medical office and a city residence. The farm in Gladwyne included an experimental garden where Mary cultivated newly discovered flowers and plants. 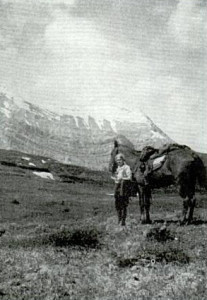 Mary Gibson Henry spent the next four decades traversing the northern and western frontiers of North America in search of botanical specimens for her garden. She traveled thousands of miles at a time in a specially outfitted automobile that had a bookcase, desk with electric light, and a rear compartment that was insulated and ventilated in order to transport live specimens. She also traveled on her horse, Chum, and packed a Victorola record player for her trips.

While Mary Gibson Henry was out exploring the Canadian hinterlands, Dr. Henry began working on big plans to demolish the old house and erect a new building that would fill the entire 48′ x 185′ lot, running all the way back to DeLancey Place. Neighbors on the street disapproved and squashed his plans, citing former owner John Howell’s restrictive covenants on how each lot on 1900-1916 Spruce Street could be used. Dr. Henry sued and the case was pursued all the way to the Supreme Court of Pennsylvania in 1932–Henry v. Eves Et. Al , 306 Pa. 250 (Pa. 1932)–where he was vindicated and given permission to build on the lot. The project never came to fruition.

In the mid 1930s, Dr. Henry, now retired from practicing medicine, leased the house to the Franklin School of Science and Arts, a vocational medical school that specialized in certifying students in medical technology with six and nine month training programs. The building and architecture firm Brownworth & Company was contracted for renovations to accommodate classroom space. Dr. Henry died in 1938.

The medical school remained 1906-8 Spruce Street until 1943, when the building became the Playmate School, the equivalent of a modern day care center. 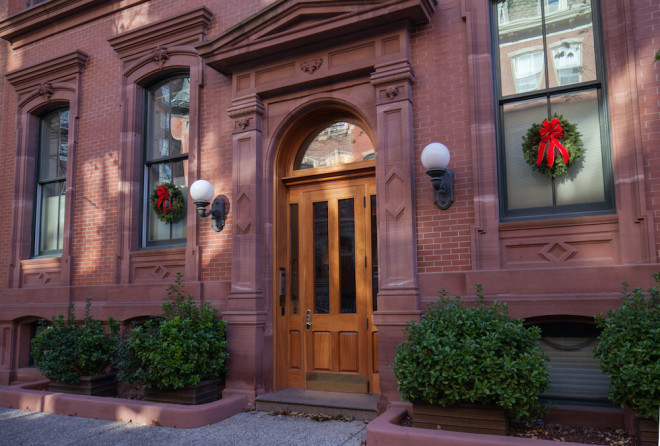 In 2006 Rittenhouse Management Corporation began restoring the mansion’s façade to its original design after drastic renovations in the 1950s flattened the first floor | Photo: Michael Bixler

The next owner, real estate broker Meredith M. Jack, leased the Fox-Henry mansion to musician Leo Ornstein and his wife Pauline, who founded the Ornstein School of Music there. Soldiers returning from Europe, Asia, and the Pacific after World War II signed up for classes there. At its highest point the school’s enrollment reached 1,000. Jazz greats John Coltrane and Jimmy Smith studied at the Ornstein School.

In October 1953, the Ornsteins retired to New Hampshire. Builder E.F. Roberts bought the house and, in 1954, completely overhauled it under the designs of architect George Daub. Roberts installed a polished stone façade at street level and awning windows on the upper floors. Roberts intended to convert the house into an apartment building, but instead it became the offices of the Champion Container Company until the firm went out of business in 1963. 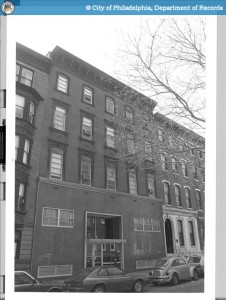 A photo of the Henry mansion in 1986 shows the 1950s alterations to the facade | Source: PhillyHistory.org

Benjamin and Stella Pomerantz bought the mansion in the 1960s, adding parking to the garden, which they rebuilt. The garden was featured in the June/July 1967 issue of Center City Philadelphian Magazine.

In the 1980s the Fox-Henry mansion housed 10 apartments and the offices of a reservation agency, Bed & Breakfast/Center City, owned by Stella Pomerantz and Nancy Frenze. The business offered row houses and apartment units for travelers.

In the late 1990s, Wayne Spilove’s Rittenhouse Management Corporation acquired 1906-08 Spruce Street. Between 2006-2008, the company overhauled the building with interior and exterior renovations. The 10 units were consolidated to four (one per floor). A number of architectural and construction firms teamed up to restore the mansion’s original façade. Owner Spilove, architects and planners Campbell Thomas & Company, structural engineering firm Keast & Hood, general contractor DOMUS, Inc., masonry restoration experts Joseph Dugan, Inc., wood trim experts William H. Hammonds & Bros, and the North American Window & Door Company all collaborated to restore the altered face of the Fox-Henry mansion. The only variation from the original design was transference of the front door from an elevated stoop down to street level for easier accessibility. The project won an achievement award from the Preservation Alliance for Greater Philadelphia in 2008.

Today, the Fox-Henry mansion, converted to condominiums, is called Rittenhouse Grande. The top floor unit was featured on the HGTV show House Hunters in 2012.