Serendipity And Sustainability Take The Plunge At Thompson Bathhouse 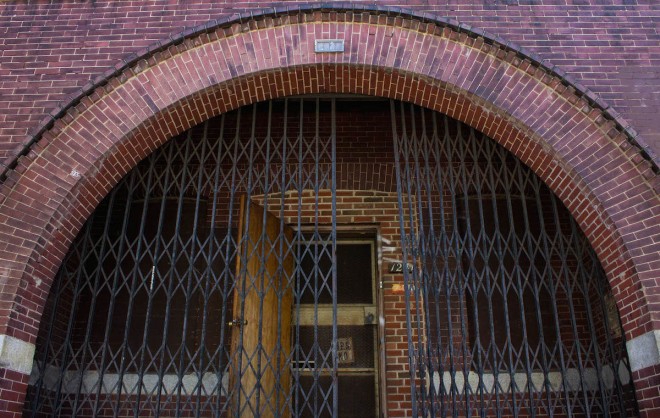 Opened in 1907 and closed to the public since 1953, the arched entryway of Thompson Public Bath will receive guests once again when PlayArts, a children’s music and arts education center, opens later next year | Photo: Michael Bixler

The curvy, brick façade of Thompson Public Bath is an unmistakable landmark under the El. Just a few steps north on Front Street from Girard Station, the one story building’s archway opens up the block when the gates are drawn with a grand, toothless yawn. The bathhouse was built at the turn of the 20th century by the Department of Public Safety to promote better hygiene and sanitation for the city’s residents living without indoor plumbing in dense neighborhoods. (See our story on the history of the bathhouse HERE.) The facility remained in use as a public pool until it closed in the 1950s and has been used for small-scale industry ever since.

After purchasing the building in 1992, Bob Buraczyk has used the bathhouse for brush making and myriad of other business endeavors.

Now, after 63 years, the gates of Thompson bathhouse will reopen to the public, this time offering cognitive development for infants and early childhood music and art instruction. The owners of PlayArts and architectural firm Bright Common, specialists in adaptive reuse, regenerative design, and deep-energy retrofits to post-industrial buildings, plan to revive the building with “smart renovation” and fill it with progressive arts instruction for children.

When Krista Yutzy-Burkey and her husband Steve Yutzy-Burkey began the hunt for a location to open PlayArts they knew they wanted to stay near their home in South Kensington. Krista was in need of a change after 16 years of teaching music in local charter schools. After their son, Milo, was born, the time was ripe to see her play-based infancy and early childhood music education project to fruition.

“Toward the end of my time at Russell Byers where I taught for fourteen years, I began implementing a play-based program,” says Krista. “I immediately saw a huge increase in student engagement. What I didn’t expect was the rapid increase in skill development that followed and that’s what really got me interested in pursuing this idea further.” 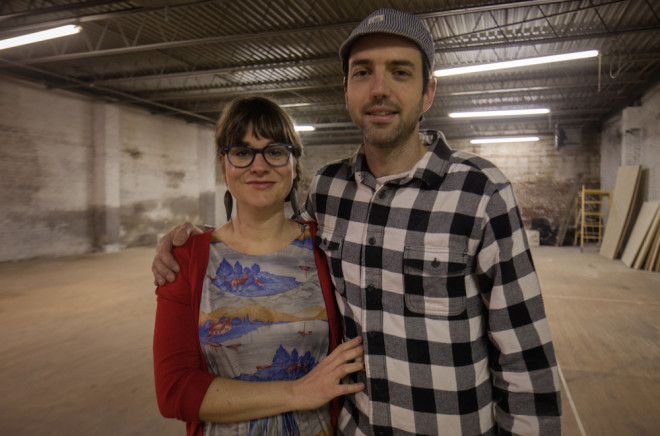 Krista and Steve Yutzy-Burkey will preserve the character of the original façade, while renovating the interior with green, zero-energy design | Photo: Michael Bixler

The couple had a sense of the square footage needed for PlayArt’s extensive creative educational programming, but the area’s voracious real estate turnover rate had them running into dead ends with each listing pursued. Taking matters into their own hands, Krista and Steve began leaving hand-written letters on properties that caught their eye to see if owners were interested in selling. On the top of their list was the old Thompson bathhouse. As if fate was on call, the owner, Buraczyk, contacted Krista two days later ready to sell. By coincidence, he had been gearing up to put the bathhouse on the market the following week.

The deal was made. The Yutzy-Burkeys, along with Jeremy Avellino, the founding principal of Bright Common, began renovations earlier this year. (Buraczyk, a violinist, has stayed in close touch with the couple since the sale and routinely plays in an informal duo with Krista, a trained harpist.)

The business model for PlayArt is rooted in creative childhood development. “The current emphasis on standardized testing and the shortsighted cuts to arts programs in many Philadelphia schools is a real problem,” says Krista. “We’ve lost sight of the importance of both play and artistic expression in human development. I felt it was important to offer an alternative option for parents who care about those things as much as I do.” The program will offer a full schedule of classes, camps, after school sessions, and private instruction for a wide range of ages. Subjects span from music, art, dance, tumbling, and yoga. For preschoolers, parent and child classes will be offered during the day. Private instruction, classes, and “play space”–an open design area where children can participate in free form music and social engagement–for all other ages will be available after school and on the weekend. 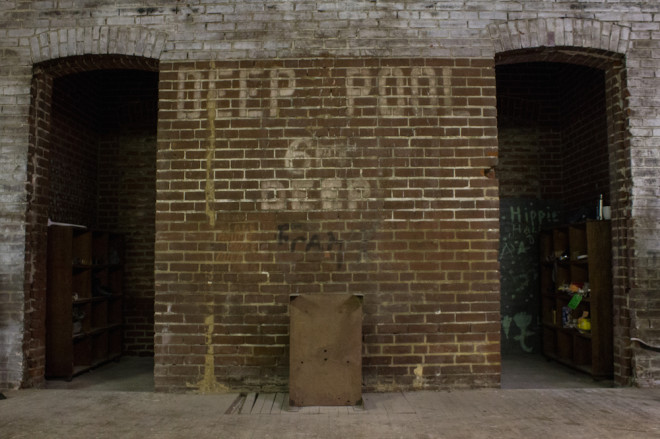 Krista, who will teach and manage PlayArts full time, plans to hire a roster of veteran instructors to help see her vision through. “Having taught for so many years, I have a pretty wide network of potential teachers already and am working closely with an art teacher who is currently building out the art curriculum.”

PlayArts will have a community outreach component as well. Krista and her teachers plan to partner with neighborhood public schools and early intervention preschools to provide free, onsite classes and instruction.

Her husband Steve, a woodworker with a background in historic pipe organ restoration, is overseeing the building renovations and build-out of the playspace. “I love being able to work in old buildings,” he says. Steve has done work for several organ companies in Philadelphia and Lancaster and has spent a lot of time in historic churches. He will be seeing to all of the finish carpentry, including period-appropriate wood window casement additions on the façade once brickwork is removed from the original fenestration. Krista and Steve hope to both appeal to parents with an appreciation for ecological design and adaptive reuse, while creating a safe, enriching environment for children to creatively explore. They also hope to inadvertently imbue a future appreciation for unconventionally historic spaces in their young pupils. 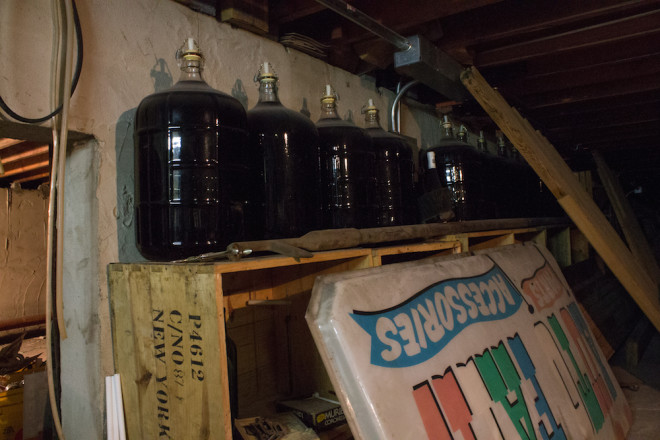 In the belly of the bathhouse. The basin of the pool was covered decades ago with flooring and used for basement storage. Gallons of homemade wine and a Franklin printing press are among some of the items that former owner Bob Buraczyk left behind | Photo: Michael Bixler

At the heart of the renovation project is sustainability, urbanism, and preservation. The couple chose the bathhouse not just for its adaptability potential and industrial appeal, but also for its centralized location between three different neighborhoods (Kensington, Fishtown, and Northern Liberties) and the old public pool’s close proximity to the subway. Building material reuse and incorporating existing infrastructure and neighborhood history with new design were also priorities, a motivation that aligned perfectly with the work of Jeremy Avellino of Bright Common. The architecture firm is best known for the conversion of a former, late 19th century pickle factory in Fishtown into a green, rustic luxe live-work studio for fine arts photographer Jaime Alvarez.

Avellino, who also lives in South Kensington, was contracted for the project after a friend and neighbor recommended him to the couple. “With our understanding of green building we were a natural fit for creating super-insulated, healthy, light-filled, and beautiful toxic-free spaces for the kids and parents that will be using the space,” says Avellino, who plans to retain the industrial grit of the manufacturing conversion the bathhouse underwent in the 1960s, while fully restoring and preserving the original façade. Classroom and playspace will be softened up for youth instruction, while still conserving its rugged character.

Designs for the floor plan include two private instruction rooms at either side of the entryway (the pool’s old changing rooms), a raised coffee bar and cafe overlooking the open playspace at center for parents, and a large classroom for group arts and music instruction. Avellino also plans to reopen the rear alley entrance for stroller access and ADA accessibility. 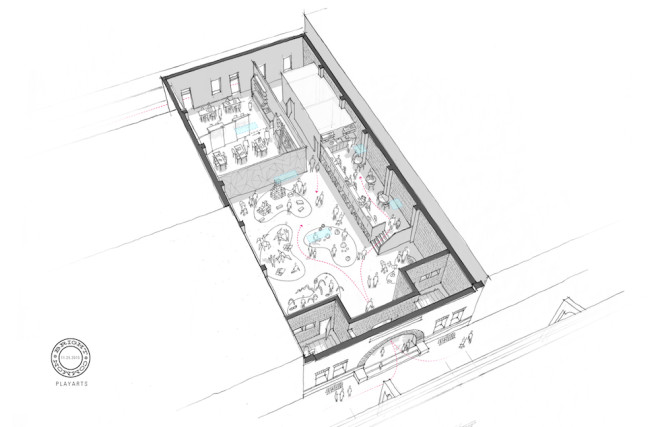 Floor plans of the classroom and playspace build out | Rendering: Bright Common

The project will use integrative design for deep energy conservation. The cooling, heating, and size of the hot water systems will be reduced and moved to an all-electric power source. Recycled newspaper based cellulose insulation and an internal vapor-variable membrane will seal the building. The roof will be covered in solar photovoltaic panels. The ultimate achievement will be to get old bathhouse’s utilities as far off of the fossil fuels-dependent grid as possible and as close to a zero-energy building.

“Krista and Steve want to create an urban oasis for parents and kids that speaks to the place its in: under the El in a changing post-industrial landscape where parents are raising their kids and enjoying all the amenities of life in a big city,” says Avellino. “We want the kids to think spaces like these are normal. Maybe the next generation will be more apt to save and reuse them and not wantonly tear down serviceable buildings like this for more 10-year life span, fee-simple housing.”