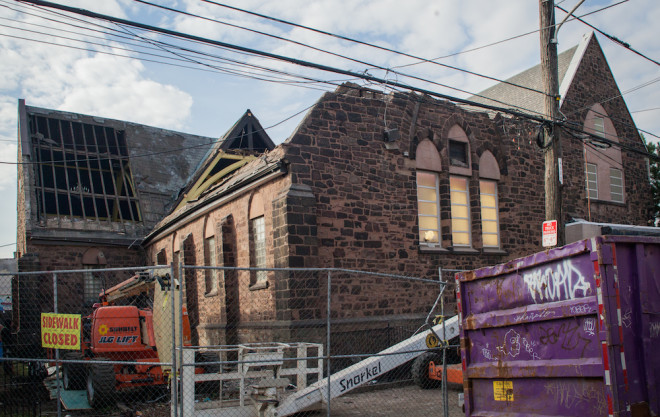 The Protestant Episcopal Church of the Messiah in Port Richmond faces its final days. Although deemed historically significant by the Historical Commission’s committee on designation, a nomination to place and legally protect the 167-year-old church on the local Register of Historical Places was denied by the full Commission last week | Photo: Michael Bixler

Anyone who reads the news or opens their door knows that Philadelphia’s historic fabric is suffering the proverbial 1,000 cuts. In the last three days, we have lost a John Notman-designed church in Port Richmond, we have learned that the Society Hill Playhouse, the first meeting hall built in the immigrant Jewish quarter and the theater that revived Philadelphia’s theater scene, will fall to accommodate the bulldozer-happy Toll Brothers, and we have learned that the Protestant Episcopal Church of the Good Shepherd on East Cumberland Street will likely suffer the same fate. That makes this an average week.

Not all the buildings we are losing are great works of architecture (though we are certainly losing those, too). Many are the ordinary places people lived, worked, worshipped, and socialized over the last few centuries. But together they give the city its character. They are part of the reason hipsters flock to Fishtown and yuppies to Queen Village as opposed to, say, King of Prussia. They are the kinds of resources other cities have figured out how to protect. And we are losing them so quickly that we now take their loss for granted. Those charged with protecting these places now devote themselves to upholding the letter of our local preservation law rather than its spirit. Instead of finding creative ways of preserving and reusing historic buildings, they find clever ways of dooming and dismissing them while reassuring us that no alternative exists. This yields fresh profits for developers and their well-paid lawyers. The rest of us must live with the results.

Really? In Philadelphia? Perceived by so many outsiders as a kind of living-history theme park where tourists roll down cobbled streets in lacquered carriages, imbibing the scent of authentic horse manure? Indeed. And perhaps these are two sides of the same coin. Even as we enshrine and curate a small patch of 18th century buildings for tourist consumption, we treat the rest–which is to say, the remaining 95 percent–as expendable or even “blighted,” a 1950s code-word that is enjoying a renaissance in the very quarters that brought us the first round of “urban renewal.” Those of us distressed by the proceedings may be forgiven for wondering if Jane Jacobs ever lived, much less wrote. Will our new designation as a World Heritage City disrupt or entrench this pattern? The answer is anyone’s guess.

One thing that is not in question is the value of Hidden City. While buzzwords like “placemaking” bounce around planning, design, and development circles, there is only one venue that posts insightful daily articles about the place we are losing and the better one we could be building. That venue is Hidden City. The stories are provocative. The photography is often spectacular. The coverage not only takes you behind the scenes, into weird and enchanting places you never knew existed, it also exposes the bizarre gyrations of local preservation policy and practice. And the daylight has a salubrious effect. Were it not for Hidden City’s coverage, spooky initiatives like this one might actually have come to pass. If this stuff matters to you–and it should–the time has come to open your wallets and keep this precious resource afloat for another year! We should count Hidden City as part of Philadelphia’s cultural landscape. And, as with the other parts, we must not take its existence for granted. Donate–in these final hours of the campaign–HERE.