Philly Schools Offer Lessons in Architecture. Can We Pass the Preservation Test? 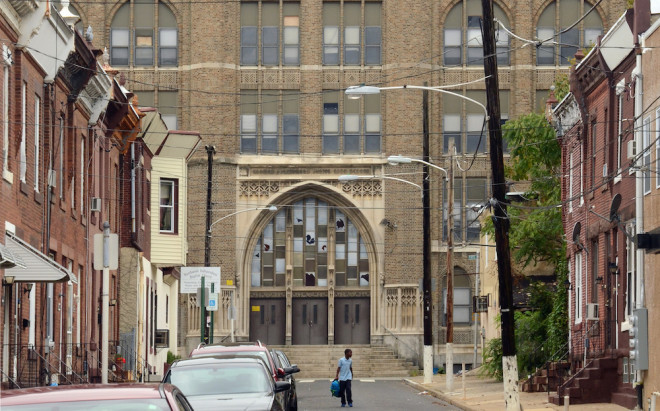 Editor’s Note: A version of this story was published in the third issue of Extant, a new publication of the Preservation Alliance for Greater Philadelphia.

With its soaring Gothic arched windows, turreted towers, and delicate carved stone tracery framing a grand main entrance, the Thomas Fitzsimons School looms over the surrounding tight-knit row houses of North Philadelphia’s Strawberry Mansion neighborhood like a medieval castle. But, for all its grand architectural character, a tiny, recent addition has drawn more attention from neighbors, community leaders, and preservation advocates lately: a plastic sign bolted to the building reading “Property Available for Sale.” Two years ago, Fitzsimons was one of 24 public schools permanently shuttered by the School District of Philadelphia in the largest wave of school closings in the city’s history.

What will happen to Fitzsimons, which remains unsold in an economically depressed neighborhood? Like more than 150 current and former public schools across the city, Fitzsimons is listed on the National Register of Historic Places, and with good reason. Together the city’s historic schools form an expansive architectural mosaic embodying nearly 200 years of evolving design tastes, construction technologies, social values, and educational philosophies. Yet, Fitzsimons isn’t listed on the Philadelphia Register of Historic Places, which provides legal protection from demolition. Indeed, only four public schools are–a massive discrepancy.

Unprotected and Facing an Uncertain Fate

The recent wave of school closings–30 in the past five years alone–has cast a shadow of uncertainty over these historic yet unprotected buildings. The Philadelphia School District’s deaccession guidelines, adopted in 2013 to expedite property sales, contain no provision mandating or even prioritizing reuse over demolition. Fortunately, schools have enjoyed a long and relatively successful adaptive reuse track record. Thanks in no small part to historic preservation tax credits available to National Register-listed properties, more than 20 Philadelphia schools have been successfully repurposed for housing, offices, or other uses. Still others continue to serve as religious or charter schools. In many ways, adaptive reuse is part of the natural life cycle for these buildings, which have historically grown obsolete as schools long before they’ve become out of date as structures.

Yet, for Fitzsimons and other newly shuttered schools, past victories are no guarantee of future survival. One unprecedented challenge is that the sheer volume of surplus properties threatens to outstrip demand, especially in neighborhoods without strong housing markets. Schools constructed after World War II present another challenge. Although excluded from National Register consideration, which originally focused on schools built before 1938, these buildings are no less community anchors than their older counterparts, and represent in their own way a significant chapter in the history of Philadelphia’s public education system and its architecture. Yet, these neighborhood schools from the 1950s, 60s and 70s are often the most difficult to reuse because they feature more challenging modernist designs and lack tax credit incentives. Underlining the particular vulnerability of these postwar schools, four have been lost in the last five years alone, with a fifth–Mitchell/Giurgola’s William Penn High School–slated for demolition later this year. In comparison, just six National Register-listed schools have been demolished in the last 30 years. 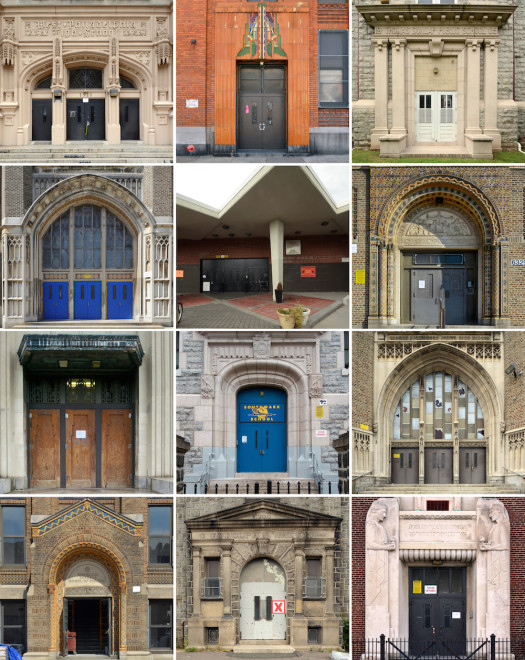 A Resource to Guide Future Efforts

Recognizing these multiple threats, the Pennsylvania State Historic Preservation Office (PA SHPO), the state agency responsible for managing the National Register program in Pennsylvania, has been focusing special attention on Philadelphia’s public schools. The agency, which is part of the larger Pennsylvania Historical and Museum Commission, recently completed a two-year survey revisiting the 158 schools originally added to the National Register in the 1980s, tracking changes in ownership, use and condition. It further identified 26 previously excluded schools constructed before 1938, many of which are potentially eligible for future inclusion. Finally, it surveyed 112 schools constructed between 1938 and 1985, laying the groundwork for a forthcoming report (a “Multiple Property Documentation Form” in preservation parlance) that will guide and streamline the addition of eligible postwar schools to the National Register.

The PA SHPO is also gathering case studies of successful school reuse projects beyond Philadelphia in order to assist both community organizations, and potential developers in identifying appropriate and viable new uses for shuttered schools–a project that will complement similar recent efforts by the Pew Charitable Trusts, PennPraxis, and the Community Design Collaborative. By highlighting examples such as a community center in Kansas City, an energy research hub in Pittsburgh, and a brewery complex in Colorado, the goal is to expand developers’ vision beyond well-practiced residential conversions, a crucial step for the future survival of both older schools in disadvantaged communities and postwar schools across the city.

Two years into the school district’s current sales drive, its preservation report card contains a few A’s, a few F’s, and a number of Incompletes. Twenty-two buildings have sold or are currently under an agreement of sale, with nine still on the market and six being reserved by the school district for possible reactivation as public schools. Charter schools have purchased five buildings, and universities have acquired four with the intention of tearing them down. At least two are currently slated for affordable housing rehabs (one by the Philadelphia Housing Authority and one by Project HOME), but many more appear headed into the hands private developers whose plans for the buildings remain fluid or unknown.

One prominent example is Maryland-based Concordia Property Group, which expects to close on the purchase of five schools by year’s end, but has announced plans for only two: market-rate apartment conversions for the former Vare and Smith Schools in South Philadelphia. Three others, including the 355,000-square-foot, 96-year-old Germantown High School, are being sold without any conditions or even expectations of reuse. Concordia, which is currently demolishing the Mt. Sinai Hospital in Pennsport for a new townhouse development, has made no public commitment to preserve the school, which sits on a 6.5-acre lot.

With no end in sight to the budget crisis facing the city’s public education system, the challenge of preserving schools will be urgent for the foreseeable future, and will always be tempered by the realities of limited resources. Clearly, school closures are a reasonable if painful response to shrinking public school budgets and enrollments. And clearly, some schools are better poised for adaptive reuse than others. But should private bottom lines be the main arbiters of which historic schools survive to serve a new use? In short, are some school buildings too architecturally and culturally important to be judged solely by the vagaries of the current real estate market? If the answer is “yes,” then the district’s school disposition system needs immediate reexamination. Regardless, adding more neighborhood schools to the Philadelphia Register of Historic Places in an informed and strategic way toward a critical first step.