Spiritual Firebrand Of The Revolutionary War Immortalized In Wood

Steel chisels have shaped the outline of a great but unheralded American patriot at Old Pine Street Presbyterian Church at 4th and Pine Streets in Society Hill. Sculptor and international ice carver Roger Wing (see our 2013 profile of the artist HERE) wrested a new likeness of the late Reverend George Duffield from the stump of a 100 year old, 16 foot high Norway maple tree. The transformation of the stump is a stroke of brilliant historical reference and worthy of a visit. If you step close, be sure reach up to touch waves of hand chiseled grooves in the Reverend’s torch-blackened cloak and smell the distinctive, lingering scent of linseed oil. The wooden likeness of the New School Presbyterian minister will be dedicated on Sunday, November 8th. 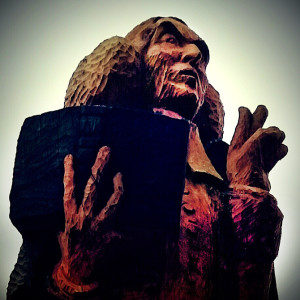 The roots of the Norway maple had upended the original 1835 wrought iron fence, designed by architect John Haviland, causing it to buckle and tilt over the Pine Street sidewalk. The tree had outlived its normal lifespan, according to experts from the Morris Arboretum. By fortuitous accident its trunk became the perfect candidate for an honorific sculpture. To stabilize it, the tree stump sculpture is tethered to the fence by stainless steel cables. The church will need to raise an estimated $500,000 for fence restoration.

Duffield’s parents were from the north of Ireland. He was married in 1756 to Elizabeth Blair, who died in childbirth a year later. Two years later he married Margaret Armstrong, who was the sister of one of George Washington’s generals. Of their four children only two sons survived to maturity. No stranger to tragedy, it has been written that Duffield nonetheless had a warm manner and a prankster’s sense of humor.

His gifted, extemporaneous sermons inspired and emboldened John Adams to sign the risky Declaration of Independence. His influence was recorded in correspondence between Abigail and John Adams revealed in the 2002 biography, John Adams (Simon & Schuster, 2002), by David McCullough. Duffield, a 1752 Princeton graduate (then called College of New Jersey), served as co-chaplain to the Continental Army’s Revolutionary War effort along with Bishop William White. Wing’s expressive sculpture places Duffield in the battlefield with bible to chest as he comforts troops with cannonballs flying overhead.

Parishoner Ronn Shaffer, graveyard and church historian of Old Pine Church, has amassed a dense binder including everything he’s been able to collect on Duffield over the last 15 years. “He’s still a mystery to me,” says Shaffer, who brims with enthusiasm when discussing this unique Revolutionary War period subject. The scarcity of information on Duffield is largely because he left little record of his own, save the “Thanksgiving Sermon on Peace” he delivered at the Pine Street church on December 11, 1783 that railed against the “venal Parliament” of Britain. A reading of Duffield’s stirring sermon makes one realize this is not history in the abstract. Pain, fury and the sacrifices of war against British subjugation are still raw in the text.

Michael Schreiber, Queen Village historian and author, delves into the life of George Duffield in a chapter of his forthcoming book, Unsinkable Patriot: The Life and Times of Thomas Cave in Revolutionary America. Schreiber narrows in on Duffield’s early life as an itinerant preacher among the Scots-Irish frontier settlers during the American Indian Wars. He specifically concentrates on Duffield’s later activities in Carlisle, Pennsylvania, where he was engaged in a bitter dispute with another minister before being transferred to Old Pine in Philadelphia.

Schreiber describes Duffield’s beginnings in the city: “A great crowd assembled to hear Duffield preach his first sermon in Philadelphia, but the Old Siders locked them all out of the church. Some people in the crowd then broke the locks, Duffield and the parishioners entered, and he began his sermon. The Old Siders then sent a magistrate to evict them. Some of the parishioners picked up the official bodily and carried him out of the church; Duffield resumed his sermon. The next day, constables returned, charged Duffield with instigating the ‘riot,’ and took him to jail. The charges were later dropped.” 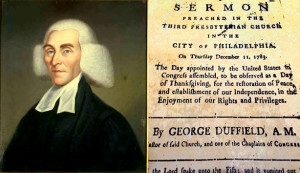 Shaffer’s research at Old Pine–including painstakingly cross-referencing Presbyterian Historical Society’s lists of surnames, military service, marriage and burial records in 18th century script–has illuminated the individual histories of the 285 known Revolutionary soldiers buried within the church’s grounds. Shaffer discovered that the remains of George Duffield were granted the exclusive honor of burial within the foundations of the church.

Old Pine Presbyterian Church will commemorate its 250th anniversary in 2018. Schaffer hopes the event will spur a Duffield family reunion. In the meantime, he continues to seek out lost information on the once-celebrated reverend.