Near Whitman House, A Queen Anne Revival For Writers 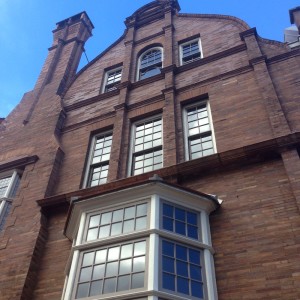 After 14 years and $4.2 million dollars, yesterday Rutgers University-Camden unveiled its new Rutgers Writers House. The Dr. Henry Genet Taylor House, a Queen Anne revival home built in 1885 at 305 Cooper Street, will now serve as a place for undergraduate writing students and aspiring writers pursuing a Master of Fine Arts degree from Rutgers-Camden’s thriving creative writing program. The Writers House, which takes cues from Penn’s Kelly Writers House, is a mere three blocks from the Walt Whitman House, the last residence of the great American poet and the place where he produced his final edition of Leaves of Grass. The Taylor House stood vacant and deteriorating for more than a decade before heavy renovations began. The building joins several others on Cooper Street that the university has brought back from the dead.

In the late 19th century, well before the South Jersey Law School and the College of South Jersey were merged to become Rutgers-Camden in 1950, the city of Camden experienced tremendous urban growth with over 125 factories, like the American Nickel Works, Wood, Dialogue & Company and what would become Campbell’s Soup, setting up shop. The Victor Talking Machine Company opened its flagship record plant at the turn of the 20th century.

Two years before Cooper Hospital opened in 1887, one of its founding physicians, Dr. Henry Genet Taylor–grandson of France’s first ambassador to the United States, Citizen Genet–purchased a lot at 305-307 Cooper Street at sheriff’s sale. Dr. Taylor put the house in the name of Helen Cooper Taylor, his wife, a descendant of the Cooper family, owners of much of Camden in the early 19th century and endowers of the city’s new hospital. On the lot, along what was becoming one of the most desirable residential streets in town, Taylor built his family house. He hired a young architect, Wilson Eyre, Jr., innovator of the Shingle style, to design the house. 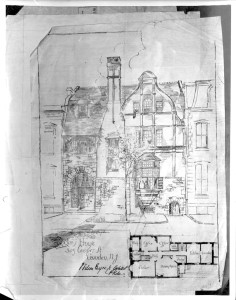 Eyre would go on to design the University of Pennsylvania Museum of Archaeology and Anthropology, The Anglecot in Chestnut Hill, and, with Alexander Stirling Calder, the Swann Memorial Fountain on Logan Square.

Dr. Taylor seemed an unlikely client of Eyre. The young architect was already gaining a reputation for asymmetry and extended horizontal planes in his informal country homes. There was no evidence that the doctor was an aesthete or that he even considered himself progressive, architecturally or otherwise. He was 48 and had lived and practiced in the family home on nearby Market Street after returning from the Civil War twenty years before.

“The Taylor house seems the result of an architect, client, and environment quietly wanting to assert themselves in new, individualistic, comfortable design,” wrote historian and former owner Edward Teitelman. “For Eyre, it seems to be the commission in which he broke free of both his teachers and of the other workers in the Queen Anne revival and Shingle style.”

Typical characteristics of the Queen Anne revival style are showcased in the restored Rutgers Writer’s House–hand crafted interior woodwork, the use of Roman and common red brick, stone, arched ogees, picturesque windows, Victorian gasolier light fixtures and marble and wooden fireplaces, all in the spirit of a rambling English country home.

Like Bernard Maybeck and Elmer Grey on the West Coast, Eyre was considered one of the “romantic eclectics,” who created a unique architecture related to indigenous traditions. His Philadelphia designs took into account local character, climate, and ecology in both style and design function, along the architect’s personality–he was said to have a sharp wit. 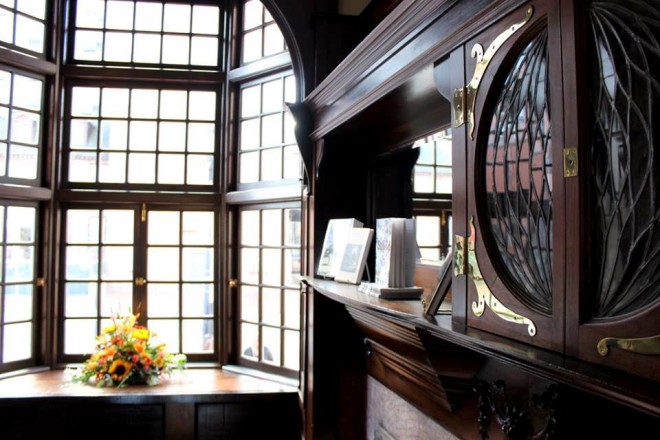 Eyre was born in Florence, Italy where his father worked in the Foreign Service and spent his boyhood abroad–international travel likely cultivated his unconventional style. An artist at heart, his decision to become an architect was a compromise with his father, who had hoped that he would practice law. The young Eyre studied at MIT for just one year before joining the office of James Peacock Sims in Philadelphia. At the time, Sims was an up-and-coming architect who practiced the “free classic” style, another term for Queen Anne Revival. Sims, 33, passed away suddenly after suffering a stroke while drawing in his office. Eyre, just 24-years-old, took over the practice.

During this period older Greek Revival houses were replaced on Cooper Street with new homes more in the style and character of late 19 century. Queen Anne revival, elements of Romanesque (heavy arched windows), and Second Empire–the French style that regionally is reflected in Philadelphia’s City Hall.

“It’s safe to say this was a house with a nuclear family and servants,” said Charlene Mires, a professor of history at Rutgers-Camden. Census records revealed that during the Taylors’ time at 305 Cooper Street, their two sons, Richard and Henry, grew up in the house along with two female servants of German and Irish descent. 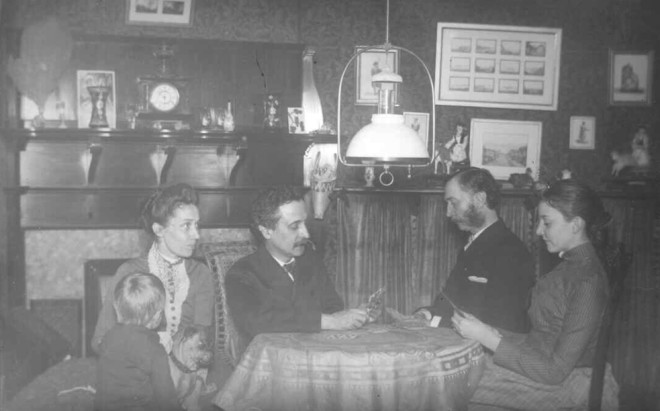 “People living on Cooper Street were displaying prosperity in Camden and the Taylor’s house is characteristic of the street. As Camden prospered it was reflective of the homes people were building,” said Mires.

In 1938, the building was renovated into apartments, and several original fireplaces were removed. Members of the Taylor family remained at the home until 1959. The house was used a private residence and apartments until Rutgers-Camden purchased the property in late 2001. The building, listed on the National Register of Historic Places and part of the Cooper Street Historic District, has been waiting for a new lease on life ever since.

Over the past few years, fencing has surrounded the façade while money was being raised and plans designed for the new writer’s house. “The chimney had collapsed and the Roman brick façade was bowing out,” said Kim Colyar of SMP Architects, the firm that was contracted for the renovation. “It was starting to pull apart near the first floor window sill.” Restoration work on the home began in October 2014. Contractors salvaged and numbered bricks and slowly rebuilt the front of the house and chimney. All of the exterior brick was re-pointed by Culbertson Restoration. “It was incredibly meticulous work,” Colyar said. 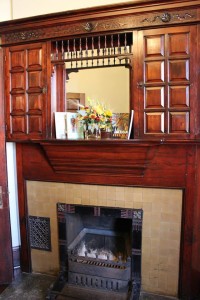 A fire escape was added on the east side of the home to meet code standards and HVAC and a digital network were installed. The renovated building features multiple seminar rooms, a reading room, and office space for faculty.

The lower half of the façade is still the original rusticated limestone. The roof is clay on the front and slate and metal in other places. The front entrance is through an off-center arch. Once inside, a cozy alcove welcomes visitors with a tiled bench and mosaic flooring. All of the windows in the house were restored along with most of the ornate wooden fireplaces. “The craftsmanship in the woodwork is unbelievable,” said Bud String, a contractor for Hessert Construction Group, who worked closely with Colyar throughout the year-long project. Buttonwood Painting performed all of the wood restoration.

The walls have been painted with colors selected by Building Conservation Associates, an historical finishes analysis company that does testing of paint and wall layers to determine original wall coverings. Solid shades of blues, whites, and yellows brighten the rooms, but mostly ensure that the walls don’t distract from the main attraction, the artful elements of Eyre’s interior work. In 1885, the rooms were individually wallpapered to the Taylor’s taste and a few of the rooms still have an exposed square of original wallpaper that was discovered underneath layers of plaster.

The estate of Edward Teitelman, the last owner of the home, has donated an original light fixture, which will eventually be installed and commemorated with a plaque.

Rutgers-Camden’s English Department, the MFA Creative Writing Program, and the Story Quarterly literary magazine will all relocate to the Rutgers Writer’s House. The home will also host the ongoing Writers in Camden author series and the The Rutgers University Camden Summer Writers’ Conference that just celebrated its 30th year.