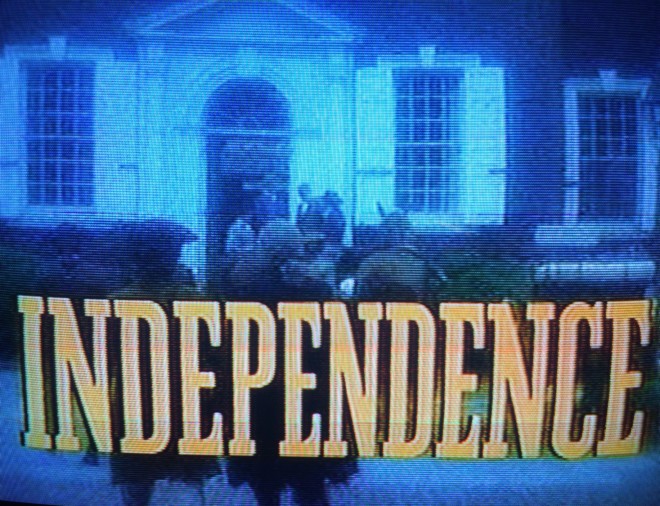 In the 1970s, the film 1776 was shown to the entire 5th grade class of my suburban elementary school in Southhampton. It told the story of the American Revolution in a wildly entertaining and amusing way. The film was a faithful version of the Broadway musical play by the same name. The movie had an impression on my young mind and left a lasting appreciation for the “foul, fetid, fuming, foggy” city of Philadelphia.

Soon after seeing 1776 for the first time, I took a field trip into the city. We watched the short film, Independence (1976), while touring the Visitors Center at Independence National Historical Park. The cinematic gem condensed the American Revolution down to 28 minutes, enough to interpret the creation of the Declaration of Independence and the U.S. Constitution, and the inauguration of President John Adams in 1797, in an appealing way.

The History Channel is in the process of filming a replacement for the film and, like so many upgrades that come with modern times, this little slice of nostalgia will soon be lost to memory. The film is quite dated and contains a number of historical lapses, so it is not surprising that a new one is slated to take its place. However, it will still be a sad day when Independence is no longer playing at the Visitors’ Center and people will no longer be able to experience the period that the film portrays. The docudrama does a pretty good job depicting the 1970s too. 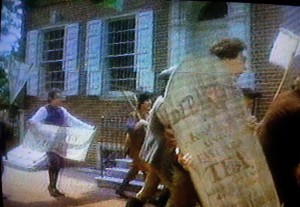 A scene in front of the Pemberton House, a Georgian mansion on the 300 block of Chestnut Street, in front of Carpenters’ Hall. Today, the building houses a bookstore | Film still: 20th Century Fox

Independence was produced by 20th Century Fox with the cooperation of the Park Service for the U.S. Bicentennial and was directed by John Huston, the eccentric actor-director who produced cinematic masterpieces like The Maltese Falcon (1941), The Treasure of the Sierra Madre (1948), Key Largo (1948), The African Queen (1951), The Red Badge of Courage (1951), and Moulin Rouge (1952). In a letter to Orson Welles, Huston called this particular project his “200th birthday present to the United States.”

The capable cast included many notables, like E.G. Marshall as the spirited narrator, Pat Hingle as ringleader John Adams, Ken Howard as plucky Thomas Jefferson (he also played the same role in 1776), and the late great Eli Wallach as our very own Benjamin Franklin. The actors and crew received union scale rather than their usual asking price. When 20th Century Fox fired the producer and shut down the production on the seventh day of shooting, Huston offered $5,000 of his own money and gave a rousing speech in Congress Hall to get everyone to come back the next day for no pay. Completed in 1975, the film was produced for $525,000, overshooting the Park Service’s $400,000 project budget.

John Adams, Thomas Jefferson, George Washington, Benjamin Franklin, and other Founding Fathers all enliven the now-comedic historic interpretation of the nation’s creation. Ben Franklin starts the proceedings by voicing a wish he had stated while alive–the desire to be preserved in a cask of Madeira wine and revived, with some friends, about 200 years later so as to observe the blossoming of United States of America. The writers of the film, Thomas McGrath, Lloyd Ritter, and his wife, Joyce Ritter, make his wish come true at the beginning of the film.

Independence covers the political events that took place in Philadelphia between 1774 and 1800 and is immensely entertaining without being boring or preachy. The docudrama glorifies the tumultuous period in the late 1700s, yet the film is not a revisionist history of the founding of the United States. Its production came on the heels of the Vietnam War and Watergate, and could very well have been injected with subjective, politically-charged undertones. However, with some poignant exceptions, the writers and Huston managed to keep the film balanced and entertaining.

All of the film’s dialogue, more or less, was taken from the writings of the Founding Fathers or words they spoke that were recorded. This gives Independence authenticity. The film was also filmed almost entirely in Philadelphia, mostly in and around Independence Hall. The abundant use of a fog machine in outdoor scenes adds to the misty atmosphere of the short, but was certainly done to hide tall buildings and other elements of the modern city from the camera’s view. 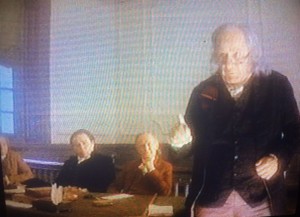 As the centerpiece of the National Park Service’s Bicentennial celebration, it was intended that Independence would only be used at Independence National Historical Park for twenty years. It was screened thousands of times at the old Visitors Center at Third and Chestnut from the 1970s to the 1990s, before being transferred in 2001 to the new Visitor Center to play a dozen times a day every day.

One bit of dialogue in Independence remains dated and recklessly sexist. Uttered by a park guide in 1976, with Benjamin Franklin (or rather, his bust dressed in a toga) listening in, she says,”Now, the Constitution says that every four years, we must elect a new man to be our President.” Of course, Article II, Section I, does not explicitly state that a man should be elected President, although the word “he” appears throughout Article II. This outright error is surprising, given the film’s earlier discourse between John and Abigail Adams about the rights of women in the country John was helping to craft.

Abigail: “And by the way, in the new code of laws, which I suppose it will be necessary for you to make, I would desire that you remember the ladies. Remember: all men would be tyrants if they could. If particular care and attention is not paid to the ladies, we are determined to foment a rebellion, and will not hold ourselves bound by any laws in which we have no voice or representation.”

John: “We are told our struggles have loosed the bands of government everywhere, that children and apprentices have grown turbulent, that Indians slight our authority. But this is the first intimation that another tribe, more numerous and powerful than all the rest, has grown discontented.”

Such clever writing, based on the actual words of John and Abigal Adams, is part of the fun of Independence. Furthermore, the length of time that John and Abigal discuss the matter is indicative of the escalation of the Women’s Rights Movement in the 1970s. 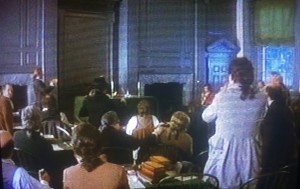 The Watergate scandal also informed the film. Virginia’s George Mason (actor Thomas Spratley) laid it out right on the line when he says, “No point is of more importance than that the right of impeachment should be continued. Shall any man be above justice? And shall he [the President] be above it, who can commit the most extensive injustice?” The discussion about impeachment in the U.S. Constitution was a rather explicit reference to Richard Nixon.

The film that will replace Independence will decidedly not be a remake of the 1976 film. According to Independence National Historical Park’s Fall 2015 newsletter, the new film will “revisit the many struggles for freedom that took place on Independence Square,” indicating that the film will focus on issues that Independence, for better or worse, did not even attempt to approach.

The 1976 film was an enduring gift from the Bicentennial celebration (and the Bicentennial generation) to Philadelphia. As we near the 250th anniversary of the nation’s birth in roughly 10 years, it seems appropriate to fondly memorialize this short movie before it is no longer shown. Be sure to go see Independence at the Visitors Center at Independence National Historical Park before it is too late.