In “Verdant Temple,” A Unifying Vision For A Disjointed Campus

“The Green” will be the first true academic quad on Temple’s Main Campus and the size of a full city block | Rendering: LRSLAstudio

In late October, Temple University released its main campus landscape master plan, “Verdant Temple.” For a campus landscape that is fragmented and often ugly, shaped over the years by ad hoc investment, the strategy developed by landscape architecture firm LRSLAstudio is perhaps the first attempt in the campus’s history to unify the 108 acre main campus. The landscape plan, a significant aspect of the university’s “Visualize Temple” comprehensive master plan, will cost at least $50 million as it is phased in over the next five years. It calls for the overhaul of lighting, plantings, wayfinding, storm water management, and more. Verdant Temple’s most exciting feature is the creation of a new Temple quad: a full city square of green space.

For the first half-century after the school was founded in 1884, the university developed a linear campus along North Broad Street, from Montgomery Avenue to Norris Street, centered around the Baptist Temple, where the university started as a night school. During the postwar era of urban renewal the school expanded exponentially, clear-cutting full blocks of row houses and building a campus in the Brutalist style. The university is now cluttered with ungainly concrete buildings. Most were set back from the street and yield plenty of open space, but very little of it is used.

While Temple began its first large-scale landscape investment project this summer with the reconstruction of Liacouras Walk between Montgomery and Pollett Walk, including Wachmann Plaza, it has also been installing elements from the plan across campus for some time now: new benches and trash cans all over campus, as well as other minor interventions such as turning the disused lawn in front of Presser Hall into a seating area for the lunch truck crowd. Add the high quality, contemporary design of Morgan Hall’s public spaces and the area around th new Science, Education, and Research Center (SERC) and you get an idea of what the “Verdant Temple” plan aims to achieve. 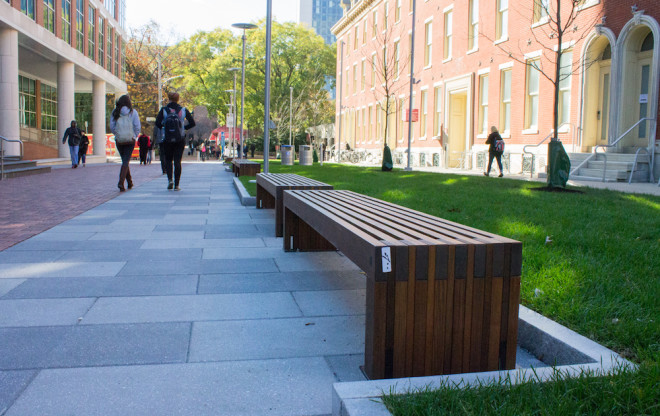 “Visualize Temple” (PDF), the school’s current master plan, is something of a letdown from its predecessor, “Temple 20/20,” completed in 2014. The latter emphasized Temple’s departure as a commuter school with its current position as a fast-growing residential university, developing lots for new student housing, as well as improving its science facilities and coaxing its campus into a comfortable, efficient, and social platform for intellectual, civic, and social development. “Visualize Temple,” the update completed this year, is primarily focused on a new library and new quad, with a secondary emphasis on developing more classroom space. It doesn’t, however, propose enough dormitory development to meet its own demand projections. That said,”Verdant Temple,” the landscape master plan developed in tandem with “Visualize Temple,” is a strong tool for achieving the master plan’s overriding goal of creating a unified campus with connective threads of smart greening.

Many prospective students make the decision about where they want to attend school based on the look of the campus as much as anything else. For students who have a choice, campus aesthetics matters a lot, and those are the kinds of students Temple is avidly pursuing. This is an easy idea to understand anecdotally: my first college choice was Pitt, and it was a choice motivated in large part by the Cathedral of Learning’s grounds. A campus, it seems, needs to have a specific look and feel to it. This kind of whole is more than the sum of its parts.

Many of the country’s best parks are designed in a Pastoral style first pioneered by Frederick Law Olmsted, a tradition carried on by practitioners such as the landscape architect James Corner, a faculty member at Penn’s School of Design and the hand behind New York’s High Line and Philadelphia’s Race Street Pier and Navy Yard Central Green. Central and Prospect parks in New York, Chicago’s Millennium Park, and the Emerald Necklace in Boston are great examples of Olmsted’s central park design theory of “unconscious or indirect recreation.” 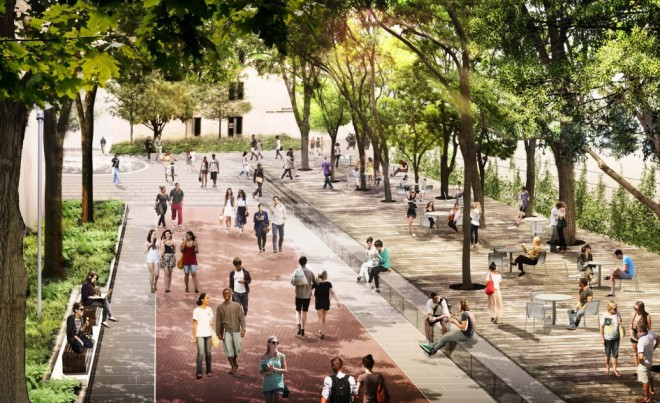 Liacouras South will be refitted with a plaza and fountain, a new elevated wooden deck and a continuous seat wall under existing trees, and carried through with standard, campus-wide red brick bordered by precast concrete pavers | Rendering: LRSLAstudio

Pastoral park design carries over well to university campus planning: Penn’s core looks and feels like one unified park that just happens to have campus buildings in it. Bricks, concrete accents, granite curbs, benches, shade tree allées, and ivy decorate all of the main pathways. This consistent approach, tying the campus together, suggests an intelligent hand in Penn’s landscape design, which was conceived by Laurie Olin.

By contrast, Temple’s landscape treatments have been quite haphazard. By Ritter Hall, near 13th Street and Montgomery Avenue, Liacouras Walk has a subdued brick treatment, shaded with an allée of trees, lending a rich campus feel. Yet a half block away, by the recently demolished Barton Hall, the public space generates an energetic, snazzy postmodernist feeling: a circular pattern of brick and concrete that looks good in promotional photographs, but nevertheless feels like it takes a long time to traverse. Nearby, next to Sullivan Hall, it’s just plain concrete. All contribute to the campus feeling of fragmentation. The spare Pollett Walk is the only successful unified path through campus, and even then, it ends short of the ugly fortress gate between Anderson and Gladfelter halls.

Recognizing the need for a greater presence of an attractive, cohesive campus identity, “Verdant Temple” conceptualizes the university’s entire campus space like a park. There’s a central organizing feature–the new main quad–and minor features carved from the surplus of marginal space, like courtyards, gardens, and new seating areas. Linking it all is a system of paths lending a unifying, top-to-bottom design. A minimalist construction materials pallet is applied and the end result, a true, park-like urban campus. 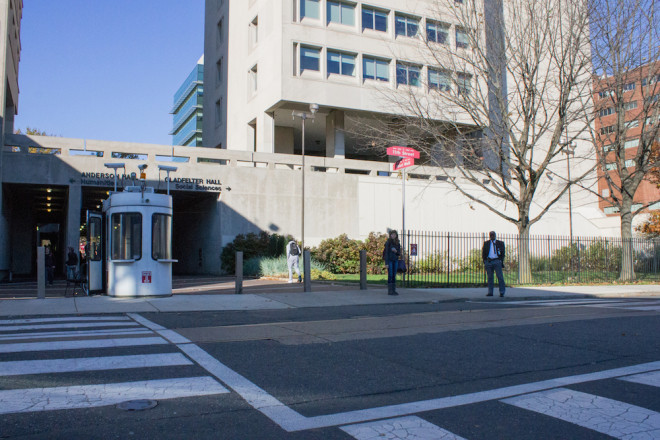 It will not be a rustic, pastoral campus–such a thing would clash with the school’s Brutalist legacy–but rather a more modern treatment, but one tempered by the formality needed to unite a hundred-plus acre main campus. The end result shouldn’t be dissimilar to other contemporary park spaces in the city like Hawthorne Park (also designed by LRSLAstudio), Race Street Pier, and the Navy Yard’s Central Green.

Like Penn, and indeed the similarly situated Columbia University in New York, Temple’s campus poorly intersects with the surrounding city. Since the early 1990s, Penn officials have been attempting to make their campus more pervious to the city, cutting new entrances and positioning new buildings to face the street. That Penn has not been entirely successful in this regard–the New College House under construction at 34th and Chestnut feels like a non-porous monolith, at least so far–is a testament to the implicit tension between town and gown. The ethic of the university, going back to medieval times, is to remove students from the world so they can focus on learning. The cloister is the best metaphor. But contemporary urbanism demands porousness. Temple wants its students to feel connected to the city. Unfortunately, recent results are mixed. The retail portion of the otherwise terrific Morgan Hall is inaccessible from Broad Street and though non-Temple people are invited into the commercial part of the building, the architecture doesn’t send that message. And now, unfortunately, “Verdant Temple” doesn’t address the issue at all. There’s no indication, even, of the way the new library, under design by Snøhetta, will meet Liacouras Walk, or even if it will. 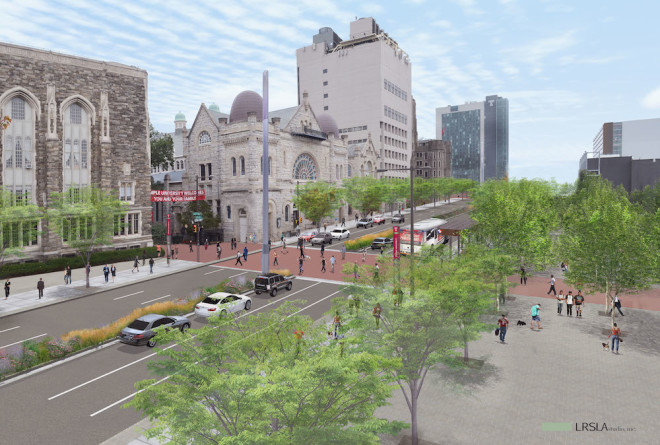 A new, public plaza to the west of Broad Street will be developed as a civic and campus destination. Raising the profile of the pedestrian crosswalk at Broad Street and Liacorus Walk and a planted median aims at making this intersection of campus more accessible, visually appealing, and pedestrian-friendly | Rendering: LRSLAstudio

That said, there do seem to be places where building expansion and replacement helps ameliorate–if not quite fix altogether–campus’s urban scars. New buildings at 13th & Diamond and 12th & Montgomery are part of “Visualize Temple’s” plan: the expansions of Engineering & Architecture and Gladfelter and Weiss halls, the replacement of Johnson, Hardwick, and Peabody halls, and the TECH Center’s parking garage. All of these will present opportunities to re-engage the streets.

While the core mission of “Verdant Temple” is to physically brand the campus, the plan also modernizes campus infrastructure–and this is one way to communicate urban integration. Outside of the landscape architecture, transportation elements are perhaps the most important part of the vision. In a clean break from its predecessors, “Verdant Temple” doesn’t have a parking plan in its own right. Instead, it focuses on pedestrian and bicycle infrastructure projects: 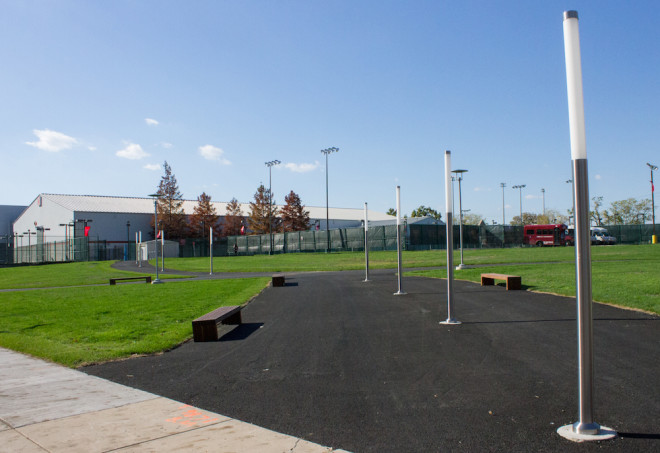 The plan is ambitious when it comes to storm water infrastructure upgrades and seeks to manage Temple’s entire 108-acre main campus:

Finally, campus lighting would be reworked:

There’s more here, too: a plan for public art, charging stations on a campus-wide level, signage and way finding treatments, plans for the campus’s major pedestrian and vehicular gateways, and “Temple Made” bike shelters among other features. It’s an impressive vision document, and one the school seems committed to following.

Over the past decade, Temple has been transitioning from commuter campus to residential school, improving its academics, becoming more selective with its admissions, coming out of Pitt and Penn State’s long shadow and becoming a brand name in its own right. Nearly everything the current campus administration is doing is designed to further that process: both a natural change and a stated goal. But, in raising the school’s profile, expectations of what campus looks like have to be met. That’s “Verdant Temple’s” goal.