Hugo Bilgram And His Machine Works 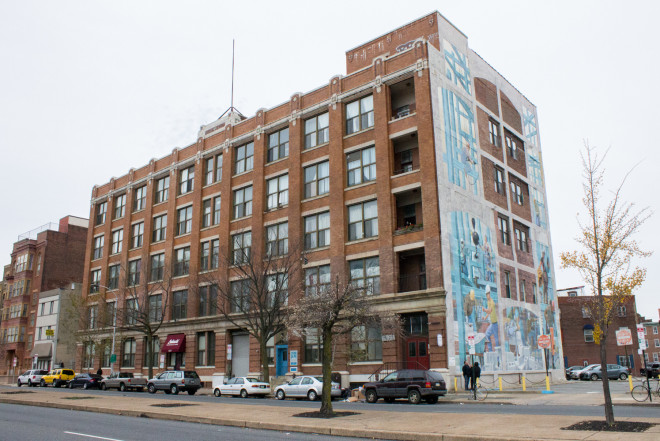 Hugo Bilgram’s machine shop looks almost as young as the day it was built. The factory was the first reinforced concrete building in the city and was architectural firm Ballinger & Perrot’ first attempt combining the relatively new building method a their signature brick and stone façade | Photo: Michael Bixler

The Bilgram Machine Works building at 1217 Spring Garden Street is a testament to the energy, ambition, and ingenuity of Bavarian immigrant Hugo Bilgram. The innovative factory owner was a master of industrial design, an economics and labor expert, and a slime mold enthusiast who began making a reputation for himself in Philadelphia’s manufacturing circles at turn of the 19th century. His five-story former machine factory was the first reinforced concrete building in the city. This blue-collar landmark was built to last, and it still stands today at full occupancy as an office and apartment building.

Hugo Bilgram wasted no time when he arrived in Philadelphia from Germany in 1869. At 23, he worked as a machinist at the Southwark Foundry & Machine Company (now the site of Sack’s Recreation Center and Playground at 4th and Washington). At the same time he taught mechanical drawing courses at the Franklin Institute and worked for optician Joseph Zentmayer. Bilgram went on to design instruments and machines for Southwark Foundry and the L.B. Flanders Company before taking over the management of the Brehmer Brothers Company machine shop in 1879, manufacturers of the final version of the “parlor” tinfoil phonograph for Edison Speaking Phonograph Company. Bilgram was a mathematical and engineering prodigy who understood the needs of the near future. He developed his own method for analyzing steam engine slide valves and also devised a method for accurately drawing the outlines of gear teeth to aid in streamlining production. In 1884, he both patented a machine that cut beveled gears and took ownership of the Brehmer Brothers Company. 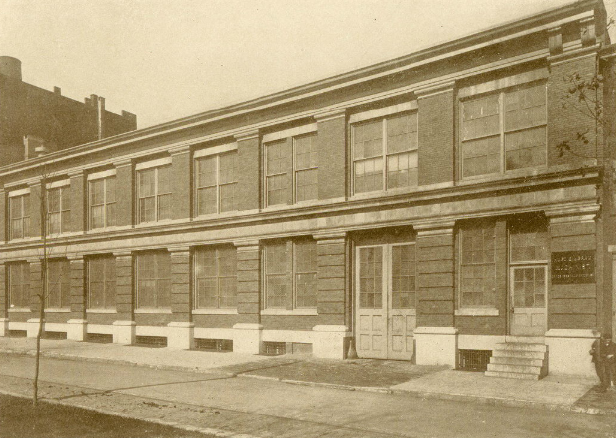 The two-story Bilgram Machine Works a year after completion in 1905 | Source: Ballinger & Perrot Formerly Hales & Ballinger. Members of the American Institute of Architects. Architects and Engineers for Manufacturing and Power Plants Specialists in the Designing of Reinforced Concrete Fireproof Buildings , G.M.S. Armstrong, Philadelphia, 1905

He reincorporated Brehmer Brothers as the Bilgram Machine Works in late 1884 and steadily developed more innovative designs for machines and parts used in manufacturing. The company began to grow in size and success. In 1902, Bilgram purchased a 12,000 square foot parcel at 1221 Spring Garden Street and commissioned architecture firm of Ballinger and Perrot to design a four story factory and headquarters for his company.

Bilgram’s new factory was the first manufacturing building in Philadelphia made of reinforced concrete and the first ever designed by the Ballinger firm, who would go on to design many more in the coming decades. The Bilgram factory was also the first building in the city to use sawtooth skylights. The building, originally planned to have four stories, was opened with only two in 1904.

Another Ballinger & Perrot building, the Ketterlinus Lithographic Company Printing House that once stood at 4th and Arch Streets, is often misidentified as the city’s first reinforced concrete building. Although construction began roughly a decade earlier than Bilgram Machine Works, the printing house was finished in 1920. 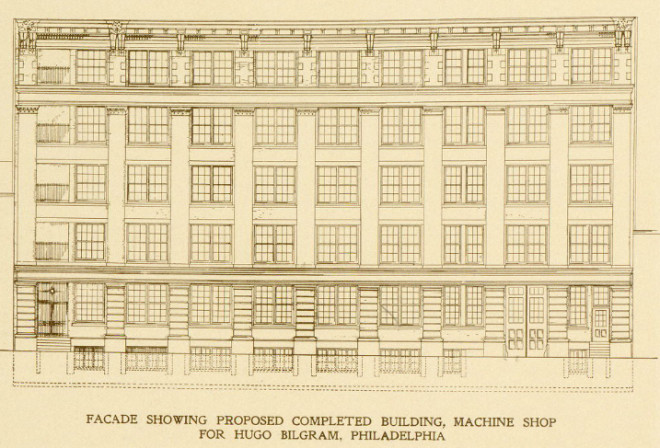 The original architectural drawing of the factory included three extra stories, which were added later in 1919 | Source: Ballinger & Perrot Formerly Hales & Ballinger. Members of the American Institute of Architects. Architects and Engineers for Manufacturing and Power Plants Specialists in the Designing of Reinforced Concrete Fireproof Buildings , G.M.S. Armstrong, Philadelphia, 1905

At the time the new Bilgram Machine Works looked like any other elegant factory building of the period due to its ubiquitous brick and stone veneer. Ballinger & Perrot considered the design so successful that they repeated the reinforced concrete with brick and stone façade method many times over the next few years. Examples include the Crane Ice Cream Company Factory at 23rd and Locust Streets, the Victory Taking Machine Company plant in Camden, and the Friedenwald Company’s printing plant in Baltimore. With each new project the firm improved on the designs and engineering of this new kind of factory construction.

By 1910, Bilgram was doing well enough to add a seamless addition on the eastern end at the building, expanding the address to its current range of 1217-33 Spring Garden Street. The most significant addition came in 1918 when construction began on a three story addition to the building. The project was designed again by Ballinger & Perrot, this time with hundreds of reinforced concrete factories under the firm’s belt. New façade embellishments included an ornate brick and stone cornice similar to those found on other Ballinger buildings of the era.

Construction was complete in 1919. With the additions the building was now over 55,000 square feet and large enough to share with other industrial concerns. Both the Decorative Lamp & Shade Company and Pallmall Knitting Mills–makers of sweaters for the US Army Ground Forces division between 1939 and 1945–leased some of the new extra space in the Bilgrim Machine Works. 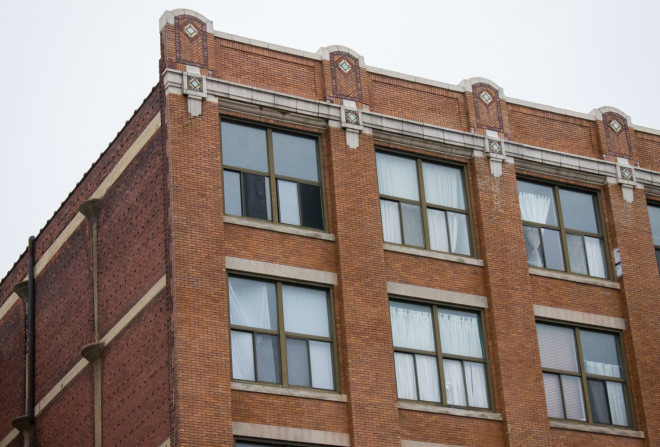 In addition to his obsession with manufacturing technology, Bilgram was also a self-taught expert on  economics and employment. During factory lunch hours, he would conduct lectures for his workers on politics and labor. Bilgram wrote four books on the flaws of capitalism, a peculiar philosophical undertaking for a staunchly anti-union, self-made industrialist. His pamphlet, “The Iron Law of Wages,” is among hundreds of essays and articles Bilgram published opposing organized labor. Despite his unwavering views, it has been noted that he was blindly devoted to the welfare of his employees. He was also obsessed with mycology, the study of fungi. For most of his life he provided specimens to scientists and maintained the largest single collection of slime molds in the city.

Bilgram died in 1932 at the age of 86. His family continued running their machine shop at the Spring Garden Street location under the name Bilgram Gear and Machine Works until 1959, when the factory was sold to another firm. The company’s primary operations then moved to West Conshohocken. Bilgram kept a small office in the Spring Garden building until the late 1970s. The company was eventually acquired by the California-based Purex Corporation Limited in 1969 and renamed the Bilgram Gear & Pump Company.

The aging factory on Spring Garden Street was next used by textile makers D.B. Flower Manufacturing Company, which remained in the building from the 1960s until 1990s, despite being acquired by the Philadelphia Authority for Industrial Development in 1984 and later sold to developer Michael Grasso’s Spring-Ridge Associates in 1987.

In 2001, current owner Stephen Crane purchased the building for $1.2 million. Over the next year, his company, Juniata Design Inc., renovated the property for mixed use office and apartment space. In 2006, the large exposed party wall of the old Bilgram Machine Works was decorated with the fitting mural, “Tribute to Trades and Labor,” by Michael Webb.