Catching Rays At The Treacy Building 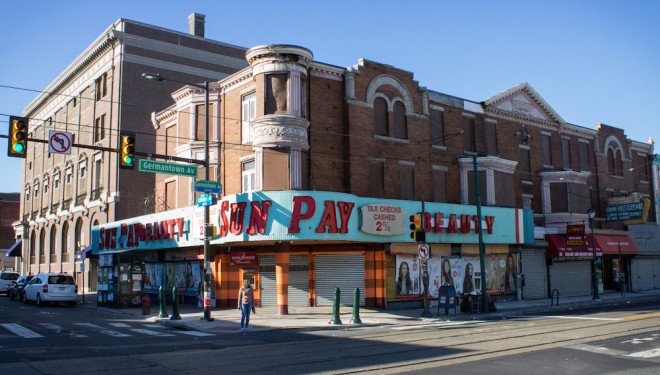 The façade of Treacy Building in an interesting expression of two distinctly different eras of commercial architecture. Built in 1907, this handsome office space got a flashy, neon addition in the late 1930s | Photo: Michael Bixler

The commercial district along Germantown Avenue, centered around Germantown and Lehigh Avenues, is an important relic from Philadelphia’s past. It was once a center of North Philadelphia’s Jewish community. The stretch survives today as a largely quiet corridor serving the surrounding neighborhood. The Treacy Building, holding up the center of the district at 2700 Germantown Avenue, stands as a reminder of the avenue’s earliest days as a bustling shopping destination.

Joseph Treacy lived in a three story house at 1005 West Lehigh Avenue, next door to Fitler, Edwin H. & Co. Cordage Factory, a fire damaged rope manufacturer being re-used as a meat packing plant. In 1906, he acquired the property, demolished it, and commissioned architect Clyde Smith Adams for a new commercial building for this high traffic corner. He was proud enough to name it the Treacy Building after himself.

Treacy died in 1907 so its unlikely he ever got to see the final product, but what a final product it was–a long three story structure built of Pompeiian brick with four retail spaces, nine offices, four “lodge rooms,” eight ante rooms, and two extra rooms of flex space. At first, the Treacy Building was primarily occupied by the Uptown office of the Reliance Loan Company. Over the next decade, the offices of many concerns moved in and out, notably the studio of famous photographer Charles H. Clime, the offices of City Magistrate Byron E. Wrigley, the Philadelphia Textile Manufacturers Association, and the Philanthropic Mutual Life Insurance Company, which is still in business in Plymouth Meeting, PA. 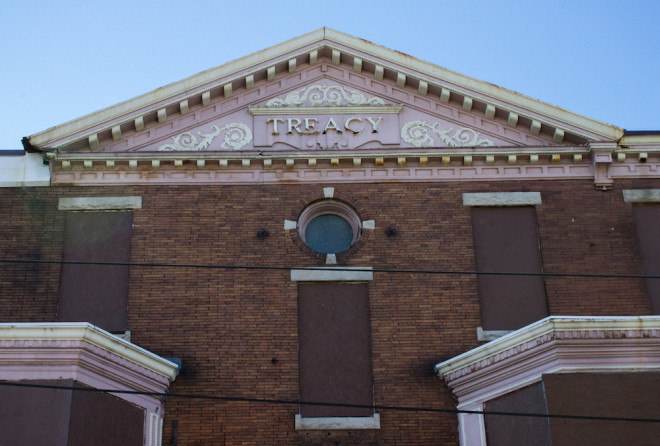 Around 1918, the building became best known as one of the many Philadelphia offices of the Guarantee Loan Company, which gave advances on modest sums of money of $16 to $300 to working class residents like maids and factory workers. The Germantown & Lehigh office was well known in the business because it featured no heavy partitions or closed offices between agents. The openness was designed as a symbolic feature to create more trust in lending since there were no backroom deals. Guarantee Loan held down the building through the 1920s.

In 1933, the Albert Greenfield firm acquired the building and incorporated Joseph Treacy’s old house into the property for some addition commercial space. In 1939, the local Sun Ray Drugs pharmacy moved into the corner retail space, replacing the New York-based chain Whelan Drugs. Sun Ray Drugs was founded by the three Sylk brothers in North Philadelphia as H & S Cut Rate just a decade earlier. Sun Ray Drugs would dominate the building over the coming decades, expanding into it further and even adding a small addition within empty space in the rear. In 1950, when the building was acquired by Joseph Toll, Sun Ray Drugs still occupied the corner storefront and a Horn and Hardart’s automat took up the northern half of the street level.

Joseph Toll was a cousin of the Toll Brothers, whose development and construction company of the same name still exists today. This Toll started in the construction business like his father and cousins, but, as a student at the City College of New York, he decided to dedicate his life to social service. He counseled troubled youth, help settle Holocaust survivors, and organized training programs for inmates. He also administered several state hospitals and taught at the Trenton State College (now The College of New Jersey). 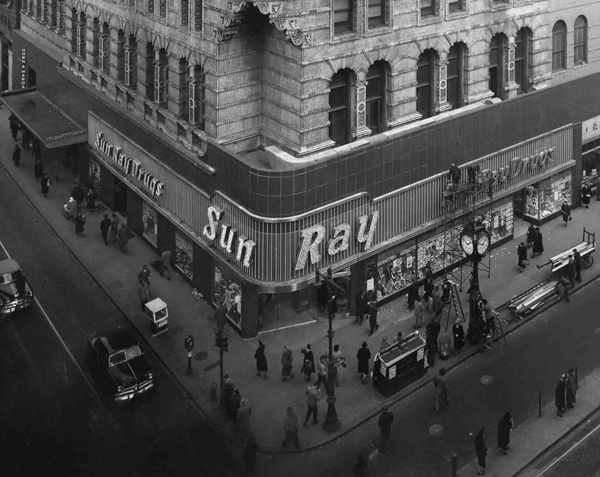 Northeast corner of the Reading Terminal Market at 12th and Market Streets, September 21, 1949 | Courtesy of Phillyhistory.org

Toll leased the offices to the Household Finance Corporation, which stayed in the building after a new owner came along several years later. Between 1958 and 1959, this new owner gave the building a massive overhaul, upgrading both the offices and the Sun Ray Drugs space, installing a six foot tall, 121 foot long cursive “Sun Ray Drugs” sign on the corner that remains today. The giant sign–drawing 15,000 watts of electricity, weighing over a ton, running on 12 transformers–was designed by Max Sarnoff, the company’s head sign planner, and installed by the Superior Neon Sign Company. It remains a fading icon of North Philly. This type of sign was a hallmark of the drugstore chain–even the Reading Terminal headhouse was once covered with a street level Sun Ray super-sign that wrapped the corner of 12th and Market.

Philadelphia neon expert and collector Len Davidson says that the sign at Germantown and Lehigh is unusual. “Sun Ray’s most common signs were the ones with 3-point animation of a mortar and pestle,” says Davidson, who holds one with this motif in his extensive collection of more than 100 neon signs. These trademark signs typically measured 6 feet by 4 feet and could be found all over the city. An animated mortar and pestle sign once illuminated a storefront on North Broad Street between Lenox and Erie Avenues. “Only a few signs were spread out like the Germantown Avenue one,” says Davidson. “There were places where they did much more elaborate signs like the northeast corner of 12th and Market with its angled, neon lines.”

In 1966, the Treacy Building was put up for sale. The lease terms of the Household Finance Corporation, Horn and Hardart, and Sun Ray were all coming to an end. Household Finance and Horn and Hardart vacated the building before the new owner, only known as REI, Inc, took over, but Sun Ray Drugs still had a few months left. REI, Inc, however, had already signed a 10 year lease agreement with the McDivitt’s Pharmacy chain. much to the chagrin of the folks a McDivitt’s, Sun Ray Drugs remained in the building past the time of its lease. McDivitt’s sued. The case, McDivitt’s Pharmacy Inc v. Mi-Law of Roosevelt Inc (43 Pa. D & C. 2d 456 [1967]), is still cited in Pennsylvania courts today. In the end, Sun Ray was able to stick around. 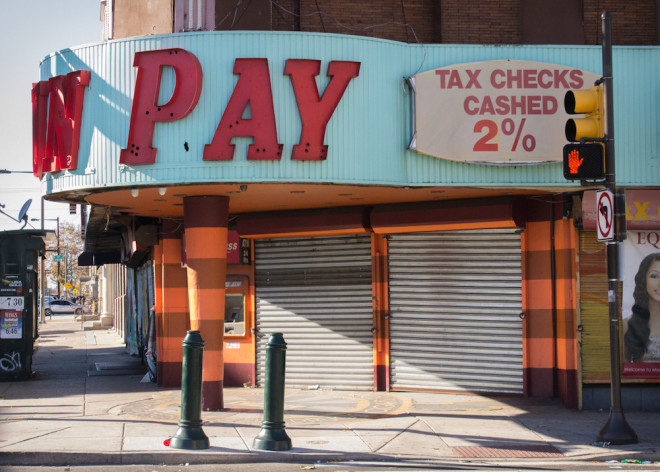 The skeletal remains of a once meaty neon sign | Photo: Michael Bixler

In 1984, Sun Ray became “Sun Pay” drugs and the sign changed accordingly. Another Sun Ray-Sun Pay sign conversion can be seen on Lancaster Avenue. A decade later, in 1995, real estate investor Richard I. Rosen purchased the building for $12,800. It was put back on the market in 2004 and acquired for $450,000 by the current owners, the Cheltenham-based trio Sae D Kim, Ju Y Kim, and Ju Y Song. They filled one of the building’s extra empty storefronts in 2008.

Nowadays, the old Treacy Building doesn’t look too hot. The windows of the upper floors are boarded up and unused. A “For Sale” sign from 11 years ago is still posted on the corner. The façade is so damaged that the building could not be included in the Philly Painting project, the painted patch quilt mural by Dutch artists Jeroen Koolhaas and Dre Urhahn commissioned by the Mural Arts Program in 2013 that stretches from 2500-2800 block of Germantown Avenue. Perhaps this building will eventually be repaired, restored, and re-used in order to preserve this unique commercial stretch.