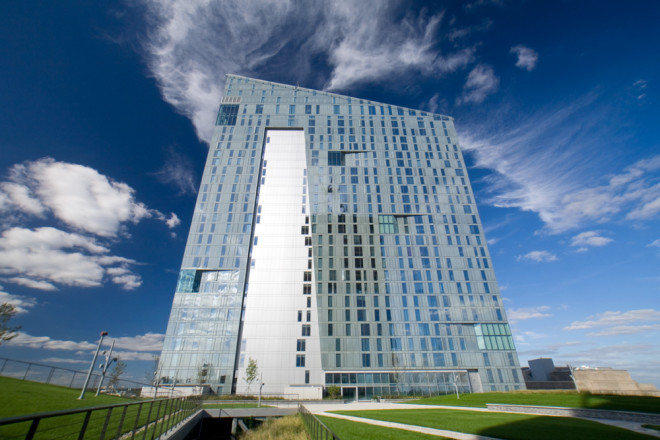 As planning and design inch the much anticipated Rail Park forward on the long-unused Reading Viaduct, another space across town beat it to the title of Philadelphia’s first elevated park. Cira Green officially opens today, a 1.25-acre oasis of green between two blue towers in Brandywine Realty Trust’s growing urban inventory.

Cira Centre South, Brandywine’s “vertical neighborhood,” features Evo, the already-open 33-story residential tower designed by Erdy McHenry and aimed toward college students, FMC Tower, the 47-story mixed-use tower designed by César Pelli under construction, and the nine-story parking garage between them. Now, the garage is topped by a sloping, landscaped park with a blue roof stormwater management system that will keep its trees, shrubs, and grasses green, and take at least a little pressure off of the city’s sewers. The design comes from the collaboration of Erdy McHenry,  Roofmeadow, and  AKF Engineers.

At 95′ above street level, Cira Green affords views of the city’s growing skyline, with many nearby cranes changing the shape of West Philly, including one right over your head building the tallest tower west of the Schuylkill River. The view of Center City is especially great if you’re a fan of 2400 Chestnut, the white rectangular tower directly across the river.

Its opening marks the latest phase of Brandywine’s growth in Philadelphia that took off in earnest with the opening of Cira Centre in fall 2005. In the ten years since, Brandywine, a publicly-traded company based in suburban Radnor, has refined its urban developments around transit nodes. In Philadelphia, that’s included adding existing buildings like the Bell Atlantic Tower (since renamed Three Logan Square) and the twin Commerce Square towers to their portfolio in addition to the new construction at Cira Centre, Cira Centre South, and 1919 Market. And last week, Stephen Stofka reported on Brandywine’s preliminary plans for developing 2100 Market Street.

While Cira Green stands to make Brandywine very little revenue, it illustrates a commitment to the community they’re shaping in the way of a unique public amenity. With the exception of private events, the park will be open to the public 7AM–8PM most of the year and 6AM–10PM in summer months. To get there, enter on 30th Street between Chestnut and Walnut Streets. (Another access point will be available upon completion of the FMC Tower.) Look up for the “CIRA GREEN” on the underside of the sloping lawn, a sign you’re heading in the right direction.

Click any of the thumbnails below to launch the gallery.