Bidding Farewell To The (Full-Length) Route 23 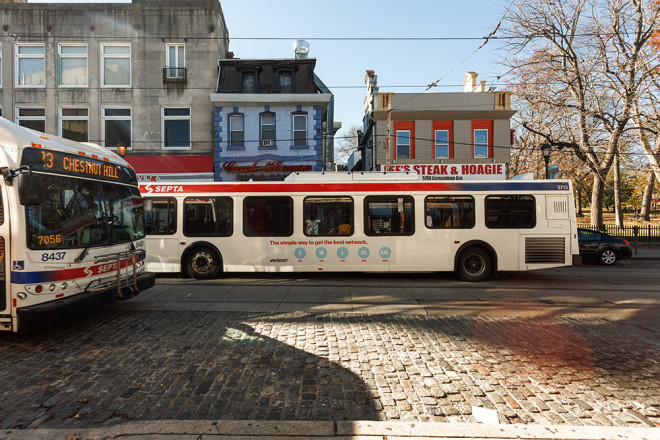 I grew up along the H/XH route in Germantown. I lived in a mid-19th century Victorian house, and the buses shook the old windows each time they passed. When I was 11-years-old, I was visiting California and staying in a house in the Bay Area. I woke up in the middle of the night to the sound of rattling windows. In my half-sleep haze, I dismissed the shaking as a SEPTA bus rolling by. By the time my mind began piecing together the incongruity of a Philadelphia bus driving by a farm an hour outside of San Francisco, I’d already fallen back asleep. We weren’t at the epicenter, but what woke me up was actually a moderate earthquake.

Even with the equivalent of 70 consecutive 5.0 earthquakes shaking my house every day, the X/XH barely penetrated my young consciousness. What did impress me was the 23 trolley a block away.

The trolleys are long gone, but dollar for dollar, the best tour of Philadelphia is the end-to-end ride on the 23. I like to start in Chestnut Hill. At 445 feet, the Chestnut Hill Loop is the literal high point of the city. The next 14 miles cut through a surprisingly comprehensive cross section of town. I’ve lived all over the city and a block from the 23 for most of my life. A huge part of how I’ve viewed, thought about, and learned from the city has been shaped by what can be seen along this route.

Last Friday, I made the questionable decision to spend 4+ hours of my first day off in months on the 23. I rode it from one end to the other, then back again. The bus was in one minor accident at Chelten Avenue. I shared the seat next to me with a dozen people along the way. I talked to a driver in South Philly about photography, paparazzi gigs, and the joys and frustrations of driving a SEPTA bus.

Mostly though, I did what I’ve always done. I put my headphones on and watched how Philadelphia has changed since my first trolley ride in the early 1980s. The short version of that set of observations is this: Germantown has not changed that much. South Philly is nearly unrecognizable.

I took some photos on this farewell ride on the old route. Here’s just a little bit of what I saw. If you have even a passing interest in Philadelphia, its history, its people, and its future, I highly recommend taking this trip before the sun sets on the old 23 this Sunday morning.