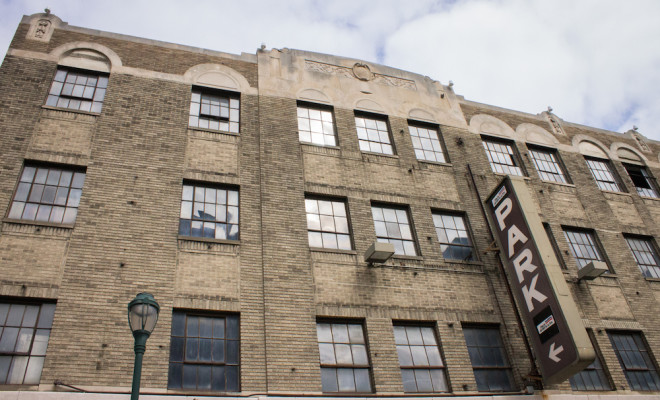 The Aldine Garage on Sansom Street was built in the 1930s with luxury amenities and cutting edge, automotive technology | Photo: Michael Bixler

With an ornamental façade and an eclectic arrangements of shops, restaurants, and theater, the Aldine Garage blends in with the 2000 block of Sansom Street with a natural grace. It is one of many developments that still carry the name of the Aldine Hotel, a fixture of the 1900 block of Chestnut Street that was replaced in 1928 by the Boyd Theater. The Aldine Garage is is a rare, surviving example of the luxury parking trend of the early 20th century. 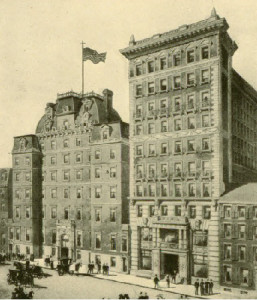 In 1925, the Rose Construction Company commissioned Ballinger, the architectural and engineering firm, to design a 64,000 square foot parking garage to stand on a 115′ x 127′ lot assembled from seven addresses. The new Aldine Garage was built with much more parking capacity than an earlier Aldine garage (part of the present day InterAct Theater). The new garage was finished around the time that the Aldine Hotel was demolished.

The design of the new garage was built to fit into the block unobtrusively and with the attractive quality of the surrounding buildings. Unlike other auto-related developments of the period, it was built on a low-traffic street, covered with an ornate brick façade, and met the sidewalk with retail storefronts. When so many garages are plopped down on city streets with little care for the fabric and design of the city—those at Broad & Locust, 15th & Vine, and 12th & Walnut immediately spring to mind—it seems almost revolutionary that we once designed parking garages to fit seamlessly within the city context, as Ballinger did in 1925. 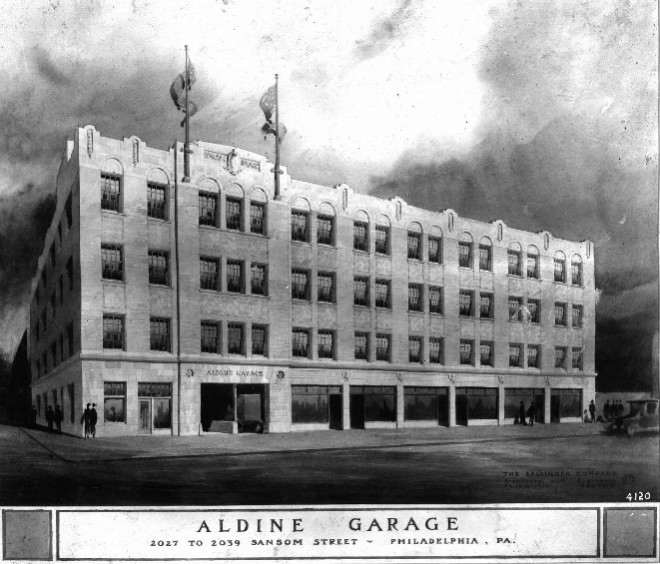 Not a bank nor an office building. The Ballinger Company’s rendering of the Aldine Garage | Source: Ballinger Collection, Athenaeum of Philadelphia

The new garage employed the d’Humy Motoramp System, used until then to transport heavy trucks to the upper floors of factories. The floors of a factory or garage were staggered, therefore only needing half the usual length and grade of ramp to reach each level. The result took the same amount of space of a vehicle elevator. The Aldine Garage was one of the earliest parking garages in the city to install this type of ramp system.

The Aldine Garage was both high-tech and luxurious when it opened. It had two stairways, a passenger elevator, waiting room, garage office, and a chauffeurs’ lounge on the roof. An Atlantic Refining Company gas station occupied the garage’s street front retail.

By 1930, the garage had been sold by its original owners, who built another Aldine Garage at 1303 North American Street, later renamed Plaza Garage. The building was featured in an Architectural Forum article on the real estate potential of luxury garages, and cited the Aldine for inspiring several new high end residential developments that incorporated parking.

New Tricks For an Old Garage 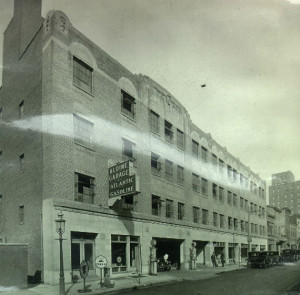 Attitudes about incorporating parking structures into the urban fabric began to dramatically change after World War II. Open deck garages were cheaper to build than enclosed wall garages, rendering classier structures like the Aldine financially unattractive and obsolete. A number of open deck garages were built in the neighborhood during this period, though a few include street-level retail.

In the 1940s, the old Aldine Garage became one of many Sley System Garages, part of a vast network throughout the city. During this time, the retail space remained mostly vacant, save a portion of the ground floor serving as an annex to Robinson Recording Laboratories, a pioneering sound studio.

In the 1960s, the 2000 block of Sansom Street was transformed by beatniks drawn to the intimate quality of the street. They called their collection of stores and theaters Sansom Street Village. The new owner of the Aldine Garage, Jay Weisman, renamed it the J & L Parkade Building, and reactivated the street level storefronts with two clothing stores, a pinball arcade, and a custom furniture store, Jay Camp Designs, which lasted more than 20 years. Weisman proposed a shopping arcade, “the Sansom Street Mall,” in the two staggered basement levels of the garage. Eventually, the underground space included 19 stores accessible through sliding glass and metal doors that opened onto the d’Humy ramp that ran between the two staggered basement levels. 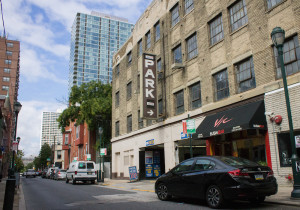 The Aldine Garage was designed as an attractive addition to Sansom Street, while fitting seamlessly into the surrounding block unlike most obtrusive, elevated parking structures built today | Photo: Michael Bixler

Pants Pub, Hassle Records, Ward’s Folly, Second Coming, and the original location of health food market Essene filled the mall and the street-level storefronts of the garage. Other retailers included a counterculture clothing store, a rare records dealer, an antique shop, and an ice cream parlor.

The mall closed in the 1970s as Philadelphia endured near economic collapse, losing more than 200,000 residents. But the street level retail still managed to attract tenants. The Fight for Sight Thrift Shop, the Hippopotamus Club, and Jay Camp Designs were among other long term occupants, some lasting well into the 1990s. In 2004, several spaces were combined for the Helium Comedy Club. Real estate speculator Sam Rappaport, infamous for neglecting his portfolio of landmark buildings, bought the garage in 1982 and ownership is still held by his descendants.

Today, a sushi restaurant, a record store, and the comedy club line the street. Drivers still park their cars upstairs.