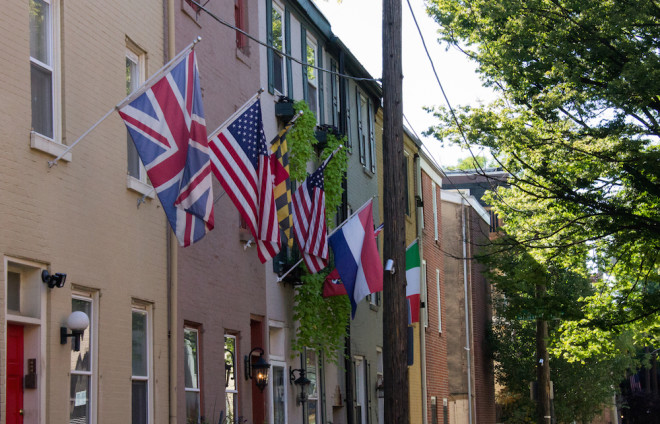 You’d be hard pressed to find more flags flying per block in Bella Vista than this cut of Rodman Street | Photo: Michael Bixler

The tree-lined 1100 block of Rodman Street is often admired by pedestrians for its eclectic show of flags uniformly mounted on almost every single home. Maintaining the flags has been the labor of love for neighbors Alexandra and Trevis Parson for the past 14 years. The display on Rodman Street evoke another Rodman in Philadelphia with a penchant for flags–Rodman Wanamaker, son of famed merchant John Wanamaker, whose passion for collecting banners was once on public display inside the Grand Court of the department store at 1300 Market Street.

The installation of the flags on Rodman Street was no accident. The Parsons, transplants from Iowa and Arizona, moved to Philadelphia in 2000 and quickly noticed that in Betsy Ross’s city flags were still used to communicate loyalty and identity. “We coveted some of the lovely streets in Old City that proudly flew the American flag, as well as many of the older colonial versions,” says Alexandra. She and Trevis set out to recreate those displays at their new home on Rodman Street, albeit on a more international and varied scale.

Alexandra recalls that “Little by little Trevis was able to get more and more of our neighbors to agree to fly a flag. He’s purchased all the poles and most of the flags. Most people have reimbursed him, but the important thing has always been the beautification of the neighborhood and strengthening our community’s sense of patriotism for the U.S. and each family’s ties to other countries.” 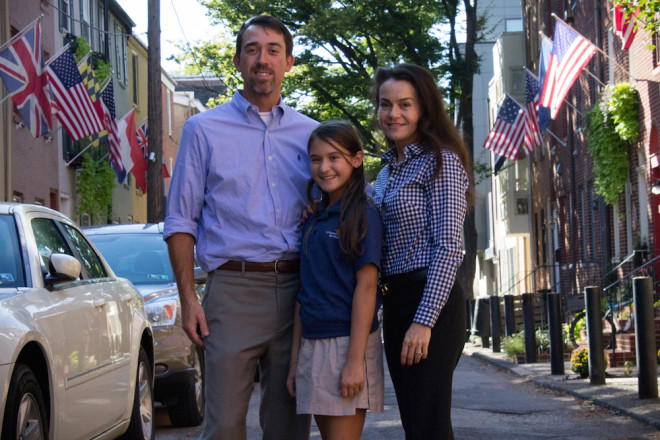 Recently, Alexandra and Trevis decided to move and have listed their house listed for rent. But the couple hopes to remain involved with their Rodman Street neighbors and continue maintaining the flags. “It’s been a lot of fun,” Alexandra says, “and has really helped to make the street a neighborhood.” The Parsons plans to bring their flag passion to their new neighborhood when they move at the end of the year. 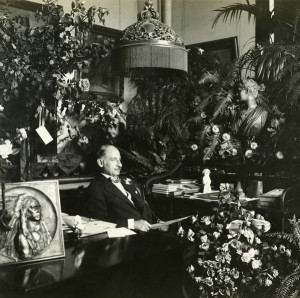 Rodman Wanamaker inherited his father’s retail empire in 1922 and contributed his discriminating eye to both the French fashions imported to the store and the interior decorative embellishments as well. Rodman is credited with enlarging the Wanamaker Organ to its current 28,500 pipe grandeur, ordering a 15-ton Founders’ Bell in memory of his father, and commissioning 1,655 hand-painted flags that adorned the central seven story Grand Court.

Rodman began commissioning reproductions of historic flags as early as 1903 with the intended purpose of rotating their installation in the store. These silk flags, mostly produced in France, fell into several esoteric categories: Doges of Venice, military regiments of the French Revolution, heralds of knights, guilds of London, Napoleon’s tomb, and religious themes. The flags were created with such attention to detail and accuracy that several Austrian flag reproductions were donated to an Austrian military museum collection years ago.

Herbert Adams Gibbons, a writer who knew the Wanamaker family well, wrote in an obituary log that Rodman “loved music and pictures and flags and uniforms, and this love he instilled into and shared at all times with those who worked for him. In both his great stores he shared this love also as far as it was possible to do so with the general public.” 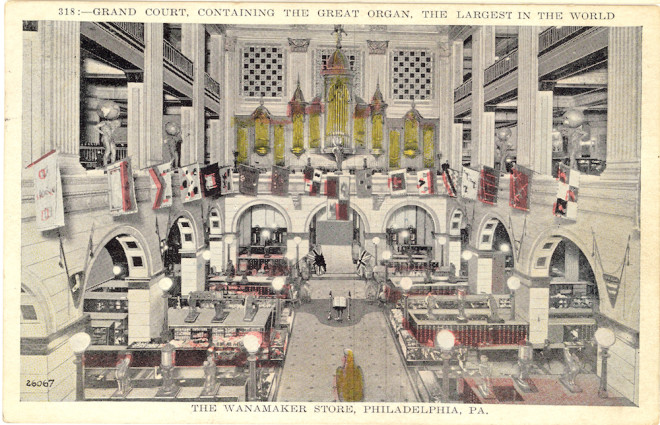 Rodman’s aesthetic tastes were believed to have been refined during the ten years he lived and worked in Paris as a Wanamaker’s resident manager, but his fascination with flags was likely inherited from his father John, who published a special color booklet in 1914 on the occasion of the 100th anniversary of the Star Spangled Banner. In the foreword to the brochure, John wrote: “Next to the love of mother in every human heart comes the love that is born in the heart of every native American for the flag of Our Country…Under the dear old flag every man is free to live, think, labor, and worship his God as his conscience dictates, and no power on earth can molest or prevent him.”

Flags from the Rodman Wanamaker Flag Collection. From left: Flag of the 1st Royal Scots regiment, Flag of the Kingdom of France, and Flag of the Isle of Man | Images courtesy of the Flag Heritage Foundation

Some time after Rodman’s death, in 1928, the immense flag collection was put into storage and neglected for decades. The Flag Heritage Foundation, a Massachusetts-based non-profit organization devoted to the preservation and study of flags, acquired most of Rodman’s collection in 1988. The archiving and historic research firm Museum & Collector Resource is presently cataloging the collection.