Of Monsters And Men: Philadelphia’s Rockwells 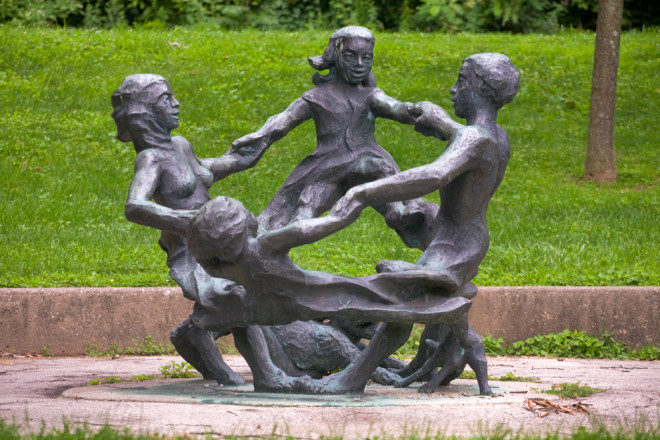 When Peter Rockwell set out for Haverford College in 1954, he went to study English literature, not art. For his father Norman cast an enormous shadow as the famous and distinctly American painter behind so many Saturday Evening Post covers, 323 to be exact. But after a fencing injury and with the inspiration of one Haverford professor, the younger Rockwell eventually shifted his focus to the arts, enrolling at the Pennsylvania Academy of the Fine Arts and carving his way out of that shadow to make a name—and career—for himself as a sculptor and art historian.

Peter Rockwell, the youngest of Norman’s three sons, has spent the last half-century living in Italy, absorbing its history while building a vast expertise on carving technique and preservation. In Rome, he was commissioned to do an academic study of the 2,000-year-old Trajan’s Column, and he created a detailed catalogue of Bernini’s stone carving markings. In 1993, he published The Art of Stoneworking, a “reference guide for conservators, restorers, sculptors, art historians and archaeologists.” And yet, his own sculpture conveys whimsy and even humor, with gargoyles, monsters, and monstrous forms frequent subjects. Three works in this style adorn Philadelphia open spaces: one at Markward Playground in the Fitler Square neighborhood, one at Saylor Grove in Germantown, and one at his alma mater in Haverford. 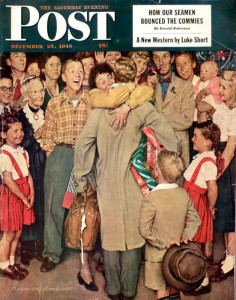 “Christmas Homecoming.” A 13-year-old Peter Rockwell, far left in the second row (with glasses), by his father for the Post, December 1948 | Courtesy of the Norman Rockwell Museum

The grotesque style contrasts starkly with his father’s idealized, sometimes saccharine depictions of American life, a contrast that took center stage at a retrospective of Peter’s work in 2009 at the Norman Rockwell Museum in Stockbridge, Massachusetts. (This institution is not to be confused with the short-lived Curtis Center Museum of Norman Rockwell Art that inhabited the ground floor of the building where the Saturday Evening Post was published until 1969. When it closed in 1997, its curators donated their collection to the Atwater Kent Museum, which hosted Cover Story, a feature exhibition of all the paintings.)

“My father was rather against my becoming a sculptor,” Peter Rockwell says via email from his home in Italy. “He said it was the worst way to try to make a living he could think of.”

That he became interested in sculpture at all happened quite by accident. In taking a non-academic course taught by Wallace Kelly at Haverford, Rockwell fell in love with sculpture, recognizing his sense of three dimensional form. And after a near-fatal fencing accident—he was pierced in the heart and lungs during a match with Princeton—he says, “I decided it was ridiculous to keep on fencing so I dropped it and decided to try sculpture.”

After finishing his academic obligations at Haverford with Honors, Rockwell enrolled at the Pennsylvania Academy of the Fine Arts to focus on sculpture. To satisfy his father’s reluctance, he intended to earn a Master of Fine Arts by taking additional courses at the University of Pennsylvania. “However,” he says, “the required courses all looked uninteresting to me so I dropped that idea and just concentrated for three years on sculpture.”

Supporting himself early on as an Italian tour guide focused on sculpture and as a teacher, he began exhibiting his work in the mid-1960s and landed his first major commission in 1967—a collaboration with his father. The Women’s Memorial Bell Tower at the Cathedral of the Pines in New Hampshire was the first of its kind to honor the service and sacrifice of women at war, with bronze tablets designed by Norman Rockwell and sculpted by Peter. The work, dedicated in 1967, led to a number of high profile commissions, including gargoyles at the Washington National Cathedral. 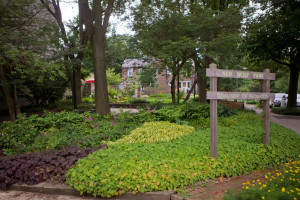 Back in Philadelphia, Ned Wolf, a great friend of Rockwell’s from his time at Haverford, was making a name for himself as a civil rights lawyer. As founder of the Public Interest Law Center of Philadelphia, Wolf fought against inequality and institutional racism, and as the president of West Mount Airy Neighbors, he strove for neighborhood diversity. He also helped negotiate the transfer of an abandoned ARCO gas station to the Fairmount Park Commission (now the Philadelphia Department of Parks & Recreation). That former filling station now bears his name, Ned Wolf Park, a landscaped pocket park dedicated in 1979, three years after his death at 37 from cancer.

In his will, Wolf commissioned a public work by his friend Rockwell. In 1978, that was dedicated to Wolf’s memory at Saylor Grove, a 3.25-acre wetland park at Wissahickon Avenue and Lincoln Drive in Germantown. The bronze sculpture depicts Wolf, his wife Flora, and their children playing Ring Around the Rosie, with a dog and cat playfully joining along.

The same year, Norman Rockwell died at the age of 84. His final published painting appeared on the cover of American Artist in time for the Bicentennial in July 1976: a self portrait draping a “happy birthday” sash on the Liberty Bell. 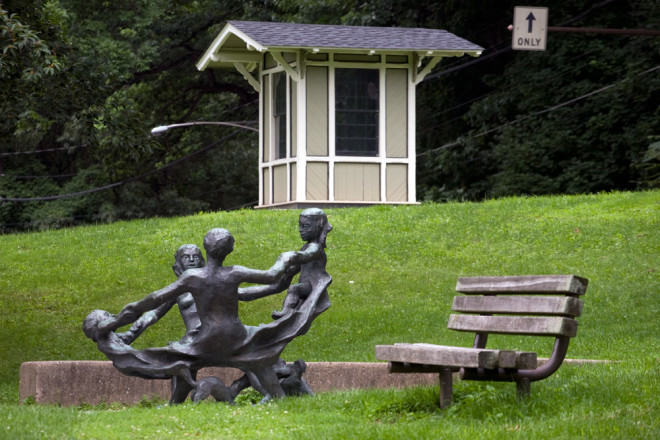 As work wrapped up on the Saylor Grove installation, a new project had already begun in Center City. The earliest delivery in what we now recognize as the (ongoing) Schuylkill Banks master plan was that of the Schuylkill River Park, between 25th, Spruce, Taney, and Pine Streets and including the Taney baseball field and Markward Playground. In 1977, Rockwell was commissioned for the city’s Percent For Art program to design a fountain sculpture for the playground. 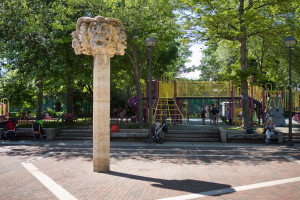 The result, Monster Capital Fountain, is a grouping of intertwined gargoyles carved of dark Roman travertine on a 12-foot brushed concrete column. Rockwell says the height was a direct request from the city—that he was told, “any stone carving had to be above the height of a tall man swinging a hammer.” Of course the height also worked to animate the splash fountain, with water emanating from the sculpture’s openings, including the grotesques’ mouths.

The fountain stopped working last summer and will not be repaired, but rather, moved to a more visible location. “The Markward plaza area is getting an overhaul,” says Stephanie Craighead, Parks & Recreation’s director of planning, preservation & property management. “The sculpture will be relocated to the south of its present location to provide a more flexible plaza space for community activities, but it will be very visible from Pine and Taney Streets.”

While Peter Rockwell has called Rome his home since the early 60s, he did temporarily return to Philly for an encore. In spring semester 1990, eight years after his oldest son graduated there, Rockwell sat in as artist-in-residence at Haverford College. Remembering a place where his wife brought her kindergarten class to climb on an osage orange tree, Rockwell worked with a group of seven students to carve The Climbing Stone.

Complementing his 1990 exhibition at the Haverford College Library, and dedicated to Wallace Kelly, the professor who inspired him decades earlier, Climbing Stone provides nooks and holes that invite people to climb it. “Both the works at Haverford and at Saylor Grove were made so that they can be climbed on,” Rockwell says. “Someone sent me a photo some years ago of a whole 7th grade class sitting on [Climbing Stone].”

At the time of the exhibit, Rockwell spoke to Inquirer reporter Walter Naedele. “Philadelphia has the best stone monsters of any city in the United States,” he said (read the article HERE). He cited the gargoyles at Penn’s Quad and the late Race Street Firehouse.

Still, and perhaps in line with the underlying humor of grotesques and gargoyles, it’s a little funny that a Roman scholar of sculpture and the son of one of America’s most famous painters has left for Philadelphia this trio of weird and waggish sculptures. 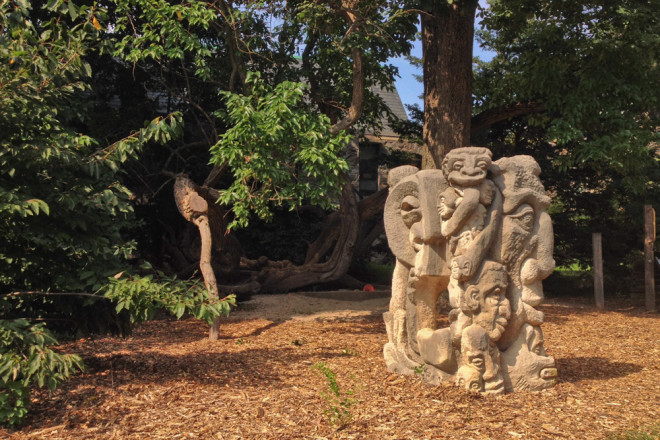 CORRECTION: The sculpture at Saylor Grove had been identified as “four children at play,” when it is actually Ned Wolf, his wife and their children.

The author would like to thanks Jeremy Clowe and the Norman Rockwell Museum for their assistance in this story.