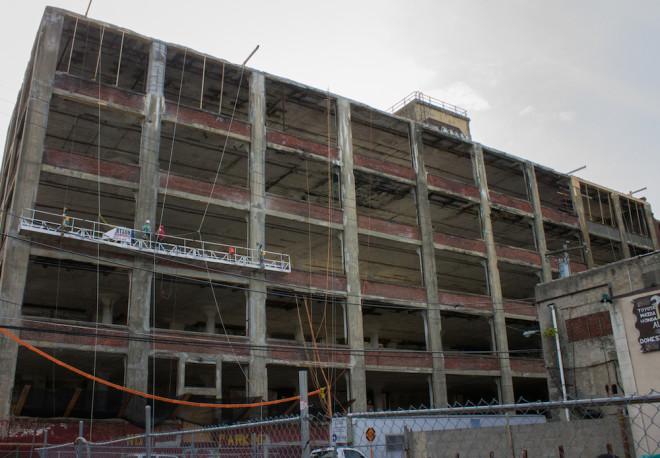 New life for old bones. Orinoka Mills readies itself for a positive return to serving the community | Photo: Michael Bixler

“Transformative” is a word that gets thrown around a lot these days during this era of accelerated redevelopment. Residential towers going up on Market, and those still in the rendering stages on North Broad, are cited as game changers. Pockets of dead space reactivated with bike paths, tidal parks, and green parkettes are praised for reframing how we think about energetic design and public space. Many of these projects are worthy of such acclaim as they cumulatively impact our growing appetite for a rewritable, urban landscape and push us closer to becoming a progressive, 21st century city. But transforming the everyday lives of people trapped by poverty, blight, and crime is far more difficult. How do you alter the course of a neighborhood besieged indefinitely by social and economic crisis? That is what the New Kensington Community Development Corporation aims to do with an affordable housing project, Orinoka Civic House. City officials, community leaders, and neighborhood residents broke ground yesterday on the estimated $16.2 million project.

The general mood around Kensington and Somerset isn’t what it used to be, even a few years ago. Packs of wheelie-popping children now wind down the streets on their bikes with a little less caution. Neighbors linger on sidewalks to chat without hesitation. Strangers are greeted with equal parts enthusiasm and curiosity, and the area’s signature burden of drug use and prostitution is slowly beginning to recede. A shift is taking place that is readily apparent to those who happen to be passing through. 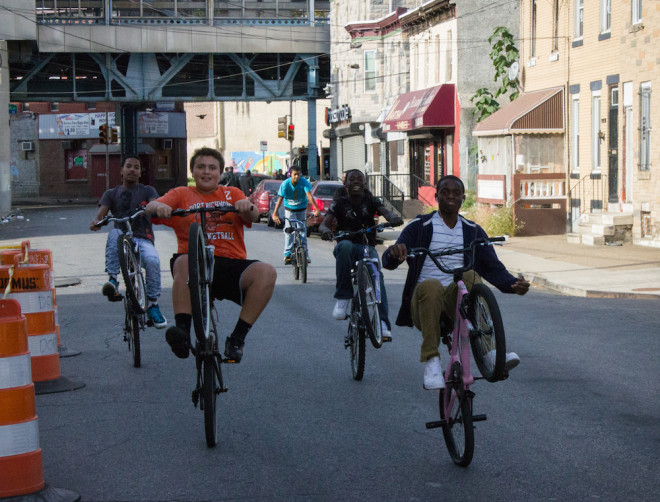 At the center of this change is the former Orinoka Mills textile factory at Somerset and Ruth Streets, one block from Kensington Avenue. The mill complex was built between the 1880s and 1920s by the Solomon Brothers and produced silk upholstery, curtains and furniture coverings. By the 1930s most of the weaving production was moved to York, Pennsylvania and the South, though the company maintained its warehouse facilities, administrative offices, and dye houses there. The company moved the rest of its operation to Horsham, Pennsylvania in the 1980s after merging with the Swiss company, Fangenthal. In 1985, Lantal Textiles, a manufacturer of transportation and hospitality textiles, purchased the buildings and the rights to the company’s extensive fabric archive collection that dates back to the late 19th century. Aside a few independent manufacturer operating in some of the newer buildings, the sprawling complex was largely vacant and deteriorating by the early 1990s. The building on Ruth Street, and an older section that was condemned and demolished by the City in 2011, became a hive of intravenous drug use activity and was likely the biggest shooting gallery in the city.

In the book The Possible City (Camino Press, 2008), Hidden City co-editor Nathaniel Popkin describes the long shadow cast by deindustrialization north of Lehigh Avenue and the lingering effects of the closing of the textile mill. From the chapter, “Living In Ruins”: “A photograph taken of the neighborhood from the EL tracks once would have shown dozens of mills, their smokestacks firing, their looms turning. Though many a good mill has been demolished, others remain. Some, like, Orinoka, stand, rotting, valueless. The jobs they offered were never replaced. This may be why there are quite possibly more addicts in Kensington than anywhere else in the city…They are themselves a kind of ruins, of a social neighborhood of intimate ties, long gone.”

The weight of the addict-overrun property and the hopelessness it brought to an area being strangled by drugs and violent crime has covered the intersection of Somerset and Ruth like a pall until recently. “The residents were held hostage,” says Sandy Salzman, executive director of the New Kensington Community Development Corporation. “It wasn’t a place you wanted to be.” 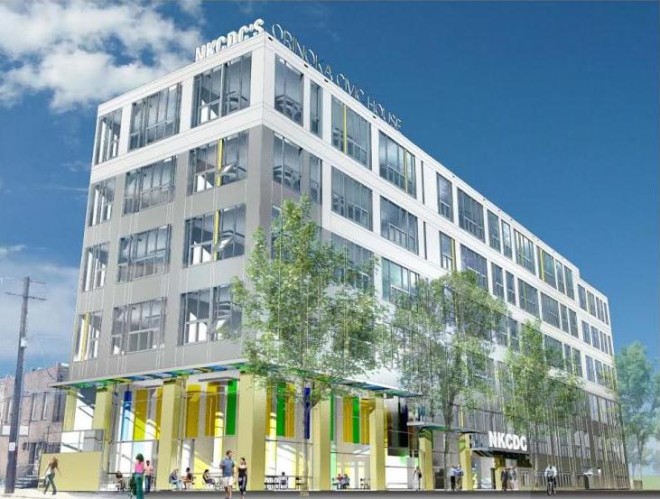 Orinoka Civic House will feature a mix of 51 residential units, a ground floor retail space, and the new headquarters of NKCDC | Rendering courtesy of NKCDC and Jibe Design

In 2011, the City purchased the mill at a sheriff sale on behalf of the NKCDC, part of the organization’s North of Lehigh Neighborhood Revitalization Plan that aims at community reinvestment and development in North Kensington similar to their work in Fishtown and East Kensington over the last three decades. Resuscitating Orinoka’s decaying mill for 51 apartment units for local residents who earn between $14,000 to $33,000 per year, or 20 percent and 60 percent of the Area Median Income, is the bedrock of that plan. Moving NKCDC’s headquarters from Frankford Avenue in Fishtown into Orinoka Civic House is the foundation. “We had been looking at the mill since 2007. It’s the biggest building in the area and people understand how important it is for its history and as a symbol of change,” says Salzman. “It had to be this building.”

Jibe Design designed the building renovation and the Orinoka Civic House campus. It will open in spring of 2017 as the result of six different plans that were all developed from data collected from neighbors. Salzman says that area residents have been as instrumental to the realization of the project as the planning and financial partners involved. 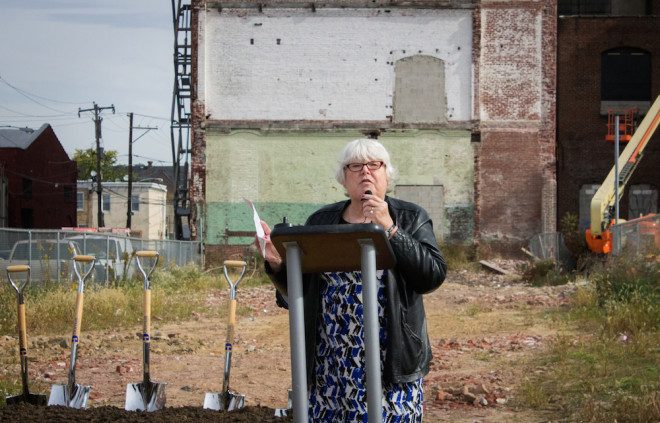 “We have been dogged because we recognized that nothing was going to happen here without doing it at this building,” said Sandy Salzman at the groundbreaking of Orinoka Civic House on Tuesday | Photo: Michael Bixler

“When we first went up there working on the first plan with the Community Design Collaborative the neighbors were fairly hostile,” said Salzman. “They were used to people coming into the neighborhood, getting what they wanted, and leaving. They all asked, ‘How would this be different?’ The groundwork we have made in the last few years with encouraging residents to take back their community has really turned things around and they really want this,” she said.

The creation of Somerset Neighbors for Better Living civic association has also been crucial to a centralized source of community empowerment. The success of organizing blighted lot cleanups has changed the face of the area and endued a renewed personal investment in the neighborhood for residents. A dramatic increase in police presence and SEPTA’s willingness to have officers come down from the El to patrol the area has had a significant impact deterring drug activities that still persist. Salzman said that after Conrail fenced off the Lehigh Viaduct illicit behaviors and crime around the rail line has begun to decline as well. 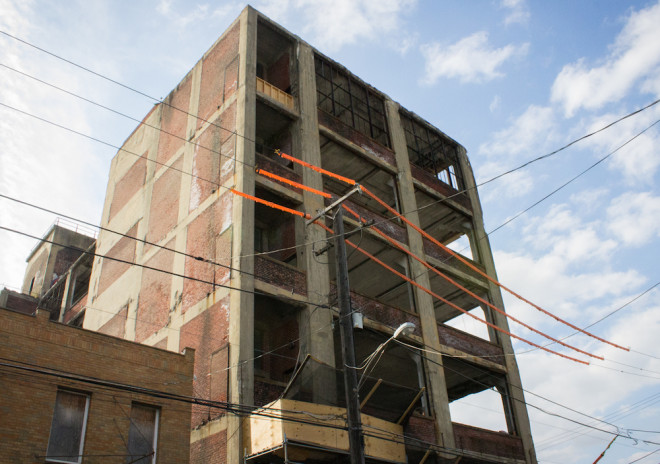 Orinoka Mills outlives its industrial colleagues Washington Mills and Buck Hosiery, both of which burned down in 2010 and 2012 due to absentee owners and dereliction | Photo: Michael Bixler

As construction continues on the Civic House, the NKCDC will begin focusing on the underpasses that create a spatial disconnection between North Kensington, East Kensington, and Fishtown. Installing lighting, a series of murals, and other efforts to create a visual thoroughfare will make crossing Lehigh less ominous, aid in bridging the physical gap between the neighborhoods, and create a more inviting passage. “We want all of the neighborhoods to unite and work together, but we’re not trying to change their identity into something that it isn’t with our work north of Lehigh,” says Salzman. “If anything, we’re trying to strengthen it.”