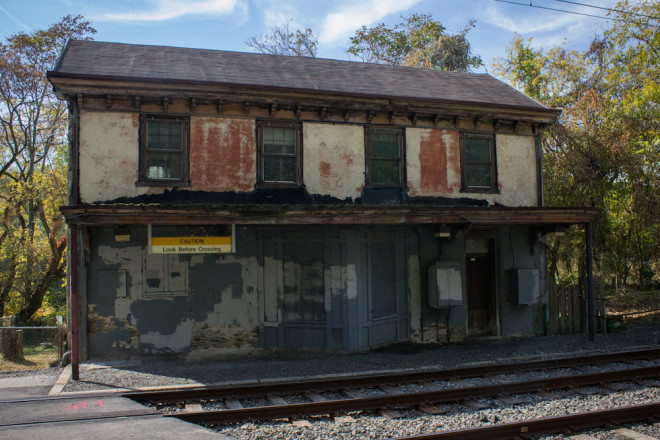 Shawmont Station was closed in 1996 after 180 years of continuous passenger rail service. It was last used as a stop on SEPTA’s Norristown Line | Photo: Michael Bixler

Shawmont Station at 7700 Nixon Street in Roxborough is the oldest extant passenger rail station in the country and the oldest building owned by any railroad company in the world. The 189-year-old station, once active on Regional Rail’s Norristown Line, is listed on the Philadelphia Register of Historic Places. SEPTA, which became owners of the station in 1981, expressed interest in saving the structure with community-backed renovations late last year, but no definite plans are forthcoming. Despite these controls in place to eventually save the structure from further deterioration, the Greek Revival passenger station still sits rotting and in deep disrepair as it waits for the saving grace of a creative, preservation-minded intervention. With the proximity of the Schuylkill River Trail and Manayunk Towpath in mind, and inspired by ideas that were proposed at a Shawmont Civic Association community meeting in November 2013, we propose putting the building to use as an outdoor sports visitor center and interpretive rail station museum.

The building was originally constructed by Nathan Nathans in 1826 with Wissahickon schist and was used as his country home before he sold it in 1830 to John Wise, a local grain miller. Five years later lumber merchant Henry Croskey acquired the home and repurposed it into a passenger shelter and freight service center, Green Tree Station, for his business. In 1857, Croskey sold the station to the Philadelphia, Germantown & Norristown Railroad, thus officiating the building as a passenger rail shelter on the line for the next 139 years. The station closed for good in 1996. (For a thorough history of Shawmont Station, see historic preservationist William Breard’s report, Shawmont Station Addendum, on the Preservation Alliance for Greater Philadelphia’s website HERE and Mike Szilagyi’s 2013 story for Hidden City Daily HERE.) 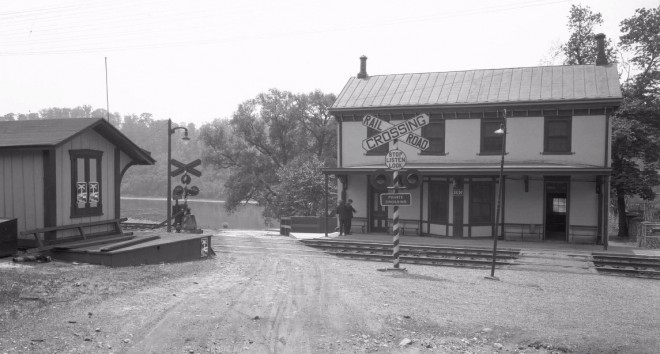 With the Schuylkill River Trail and Manayunk Towpath so close to the station it would only seem natural for the building to respond to the growing numbers of bicyclists who use the trail. Though trail infrastructure and signage has improved considerably, and use has blossomed, there is little, if anywhere on the Schuylkill River Trail, from the Neck on the Lower Schuylkill to Valley Forge, to effectively orient trail users. As a visitor’s center, the space could serve as a rest stop, cafe, museum, and bicycle and kayak rental center. 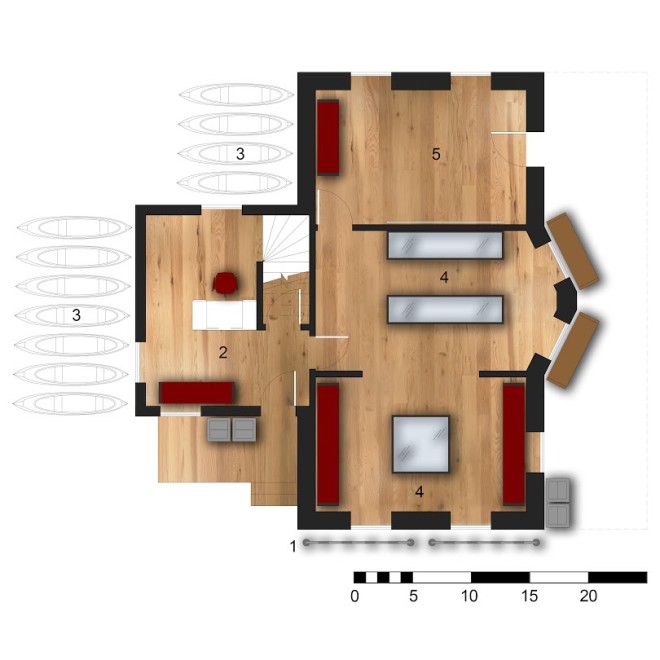 Leaving the bike path, signs will guide runners, cyclists, and boating enthusiasts to head toward the station’s porch. To the right of the entrance will be bike racks for visitors to secure their wheels and a space for onsite bicycle rentals and an Indiego bike share station. Stacked kayak storage will line the the western façade of the building.

Upon entry, guests will be greeted by a station attendant at the information desk who, along with a small staff of volunteers, will handle the sales and setting up of bicycle and kayak rentals. Display cases, archival photographs, and and a wall graphic depicting the history of the station and surrounding area will continue throughout the space. A docent will be on hand on the weekends to lead small tours explaining the history of the station. Information on local wildlife and trail maps will be readily available.

A secondary entrance on the eastern façade that faces the train tracks (the building’s original front door) will remain functional, however a small safety barrier will keep visitors from crossing onto the active train tracks. The station’s existing floors will be refinished and preserved, assuming that all of the floors are made of wood and in workable shape. Small resting benches will be installed inside the station and throughout the property. 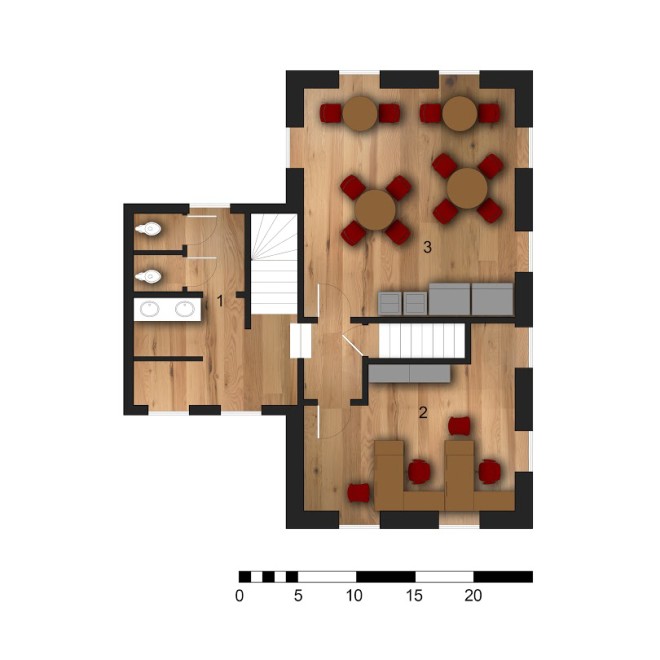 The second floor will be accessed by stairs just past the information desk. Visitors will enjoy views of the surrounding property through the second story windows, which have southern exposure. To the right of the top of the stairs is a two person restroom–the building’s original floor plan had one large restroom. After a bit of reconfiguration, we decided to move the sink out of the original space in order to make space for another commode in the original single bathroom, while also minimizing additional plumbing.

After climbing three more steps, visitors may turn to the right into a small, casual dining area. There will be vending machines with locally made snack foods and beverages (ideally all organic) as well as bins for trash and recycling. To the right will be a small administrative office for the station manager and a kayak and bicycle group tour operator. The office and dining room are separated by the attic stairs, which has a ceiling low enough that it would likely be best used for supplies and storage space. 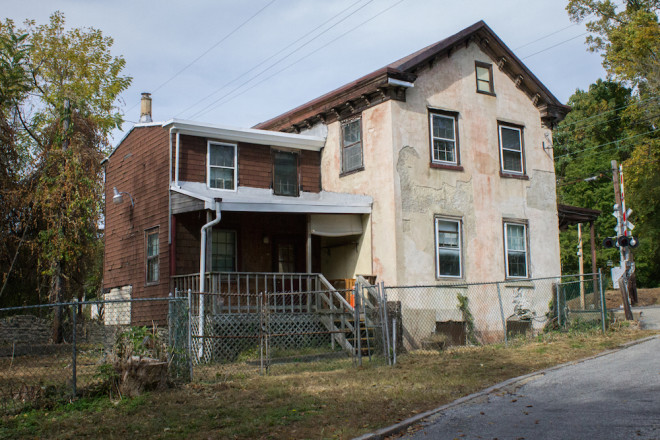 The Schuylkill River Trail sweeps parallel to the rear and back lot of the station, making it an ideal stopping point for runners, cyclists, and walkers. Its positioning to a river access point only a few yards away makes the property an idea location for kayak rentals | Photo: Michael Bixler

The exterior of the building will feature a water fountain for refilling reusable water bottles as well as a ground level fountain for dogs being walked along the trail. Both will be accessible after hours for early morning runners and evening walkers.

According to Breard’s report, the station’s façade was originally finished with scored stucco. This finish has since been replaced with flat, unlined stucco. We propose that the building’s exterior be restored to its original finish by historic conservationists (or perhaps by graduate students in one of the city’s preservation programs). The window shutters, placed in storage in 1929, will either be restored and reinstalled or replaced with reproductions designed to match the originals. All painted surfaces will be covered in historically accurate hues.

Shawmont Station’s addition to the Philadelphia Register in 2009 was the first step in saving this valuable piece of industrial and neighborhood history. Historian John Johnstone provided vital floor plan documentation to aid in getting the building protected. However, the station continues to be vulnerable to the elements, vandalism, and decay. Restoring the building and putting it back in public service is a viable, credible solution for the property. Reopening the station as a Schuylkill River Trail visitor center would aid in preserving the industrial history of the Schuylkill River, while embracing the city’s recent push to reinvest in our neglected waterfronts with practical, forward thinking solutions.