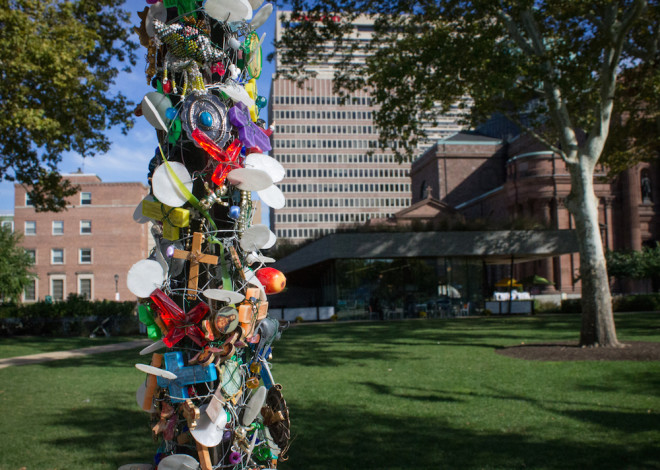 You may have encountered Amy Orr’s decorated street poles on Market Street, along Baltimore Avenue, or at the entrance of Malcolm X Park. You may have glimpsed an assemblage on the Parkway–a post encrusted with insects and reptiles in front of the Academy of Natural Sciences, or the Papal Pole, a wire net holding pastel colored plastic crosses, religious medallions, and delicate white circles that resemble communion wafers, created in homage to the Pope’s visit. Clark Park sports one now too, along the entrance path at 43rd and Baltimore. An amalgam of plastic beads, miniature superheroes, floral barrettes, and shiny dog licenses, wrapped around the pole that holds up the green Parks and Recreation welcome sign, with its list of regulations and restrictions.

There’s an air of casual spontaneity about these intricate, public creations, reminiscent of Mardi Gras beads draping from tree branches or sneakers flung over utility wires. “Mischief making” is how Orr herself refers to her process, and #alternategraffiti is one of her Instagram tags. But an up-close look reveals the careful craft involved. Each assembly is composed with an artist’s sense of pattern and the individual objects are selected to respond to their specific location. There are stories woven here, narratives told through small bits of clutter and debris that Orr has picked up off the street and elevated into moments of delight. 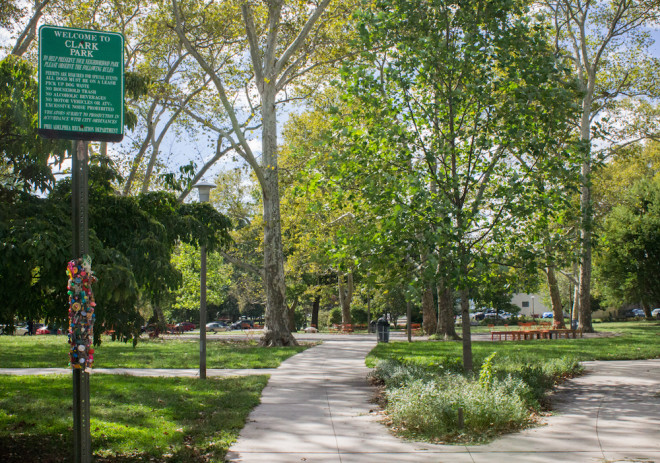 Ephemera has always been Amy Orr’s medium. In her 30-year career as an artist she has been drawn to the fleeting and disposable, the stuff that clutters kitchen drawers and litters street gutters and sidewalks. “It’s something that has an immediate use and then has no value,” she says, defining her materials. “For a moment it has a beauty and a purpose, and then it’s left.” Orr identifies as a fabric artist, and her art is a process of salvage and redemption. “I’m a quilter,” she says. “My work is informed by that practice of taking broken things and making them nice.”

Her impulse to decorate street poles began from a simple desire to rid her studio of all the excess clutter she had accumulated in her career. She decided to use the material to mark places around the city that held personal connections and distinct memories. Her first “urban intervention” took place three years ago, when she wove garlands of miniature champagne glasses and other festive party favors into a sign post at Malcolm X Park. The assemblage marked the site of Orr’s first mugging back in 1959 when she was just a girl and the park was called Black Oak Park. 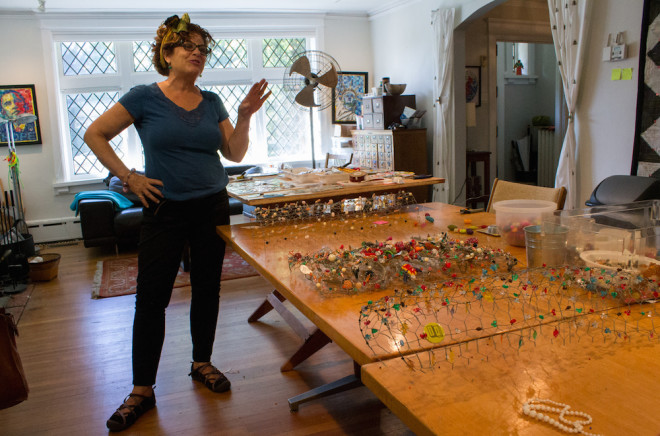 Amy Orr in her living room converted studio in West Philadelphia. ” I have almost 10 pole projects wired up and ready to go,” says Orr. “I don’t have specific plans to install in different neighborhoods. I decide more from intuition. I like seeing where the process takes me.” | Photo: Michael Bixler

Orr has lived in West Philadelphia almost her entire life, and Clark Park, the site of her most recent creation, is brimming with memories. It was West Philly’s prime teen hangout back in the 60s and, according to Orr, the location of her “first and only arrest.” Later, her son played in the long gone A Park tot lot. The lost playground is marked by the concrete turtle that has become one of Clark Park’s enduring landmarks. A bench near the Dickens Statue is dedicated with a plaque to the memory of her parents. (Orr’s father, Harold Taubin, was the first to hold the office of university architect at Penn and is credited with coining “University City” to name the neighborhood more than 50 years ago.) Orr also is a member of the informal community of dog walkers who gather at the Clark Park Dog Bowl for neighborhood conversation.

For Orr, Clark Park has also been a tremendous artistic resource, a veritable font of found materials. In the late 1980s and 90s, she began collecting crack paraphernalia, her magpie eyes drawn to the decorative possibilities of the empty vials and miniature plastic bags, and the glass from smashed car windows–all debris that testified to the nocturnal life of the park. She threaded the collection onto quilts, where they became both glittery ornamentation and wry social commentary. 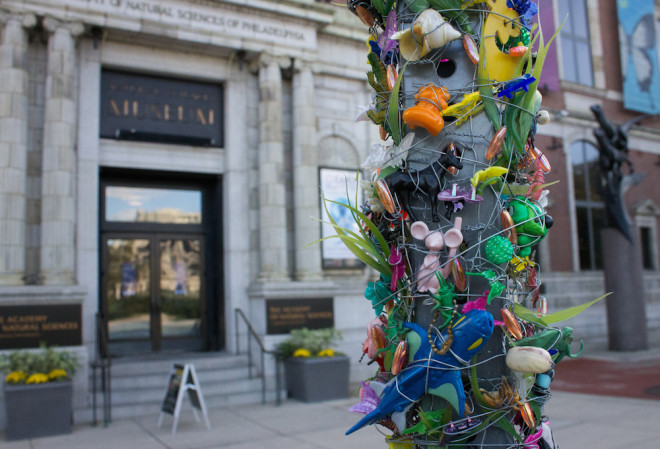 Plastic creatures stir on a parking sign outside of the Academy of Natural Sciences | Photo: Michael Bixler

As a portrait of the place, the Clark Park pole prominently features dog licenses and miniature dogs, along with an assortment of other park finds: a bulging eyeball, miniature super-heroes and villains, toys that have dropped from strollers and pockets. There are also lighters and perfume bottles and a few of the crack vials Orr picked up in the park decades ago. She debated whether to include them in her sculpture, along with the syringe and a bent spoon, which were aspects of life in this rapidly transforming neighborhood that many newcomers don’t remember. In the end she decided that this evidence, as much as the names of dogs inscribed on metal tags, told “a history of Philadelphia that we don’t see now.”

Unlike most graffiti artists or taggers who, under cover of night, periodically excise “University City” from the Clark Park entrance sign and write “West Philly” in its place, Orr performs her urban interventions in public view, though usually at dusk. “Nobody ever bothers me,” she says. The Clark Park pole is her first installation in board daylight. On a sunny Wednesday afternoon, she sets up a lightweight ladder and gets to work. Ari Kim-Ramirez, age six, is the only passerby who stops to wonder about the woman standing on a ladder weaving wire into a perforated pole. “What are you doing?” he asks. And then, noticing the toys, the tags, the bits of plastic, “Is that trash?”

“It was,” says Orr, a spark of mischief in her voice. “What do you think?”

Ari pauses to make a considered answer. “It bee—yooo-teee-ful,” he says, drawing out the syllables to express his admiration. 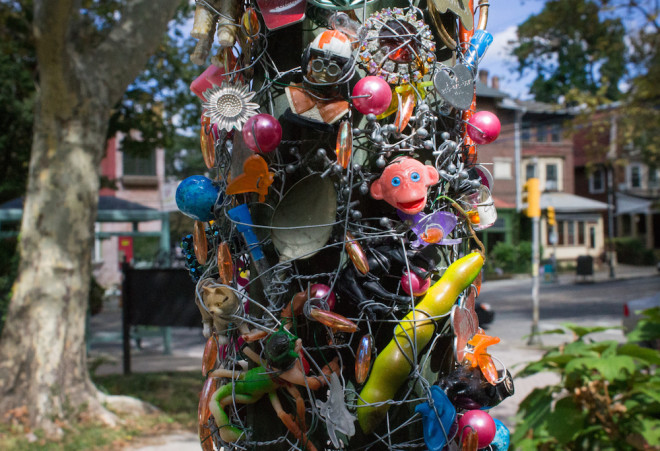 Orr hopes others will respond with equal enthusiasm. She likes to stand back to see how others respond she  her sculptures are done, to watch them pause and question, then draw nearer to investigate. Public art, in its anonymity, invites others to react and interact, sometimes in unexpected way.

Orr has returned to Clark Park several times in the past week, bringing a few more plastic dogs and park finds to wire into the installation. “My philosophy is more is more,” she says. On one trip, she noticed a miniature offering. Someone had left a plastic figurine at the base of the pole. Was it Ari? She didn’t know. She picked it up and wove it into the assembly, another character in an ongoing story of artists responding to the particularities of place.

Join Amy Orr and DesignPhiladelphia on October 9th the hands-on workshop, Sculptural Graffiti: Encrusting the Landscape with Clutter, Ephemera and Swag, and create your own sculptural graffiti with wire and common artifacts. Participants are requested to bring a pocketful of their own clutter to embed in the colorful and engaging street art.