In Celebration of “Ciao Philadelphia,” A Look At Italian Immigrant Heritage of Pier 19 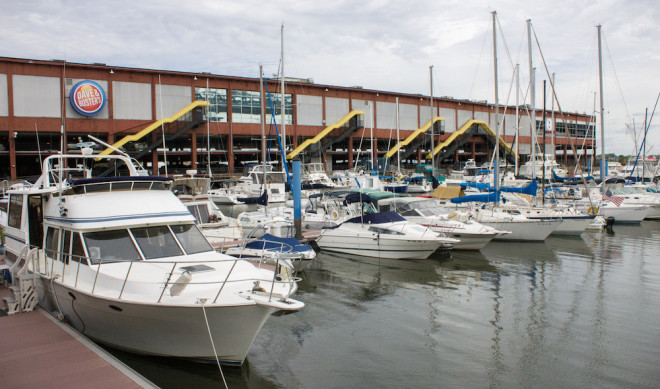 Today, Pier 19 is best known for the burgers and arcade entertainment of Dave and Buster’s, but the history of its piles are driven much deeper into the Delaware River. It was built on the site of Philadelphia’s original ferry service between Pennsylvania and New Jersey and was the city’s first municipal pier that welcomed scores of passengers from Southern Italy throughout the early 20th century during its time as an immigration station. In honor of the second annual Ciao Philadelphia festival, a month-long, citywide celebration of Italian heritage and culture, we take a look at this overlooked gateway that welcomed many of the city’s Italian ancestors to the United States.

The Birth of a Waterfront 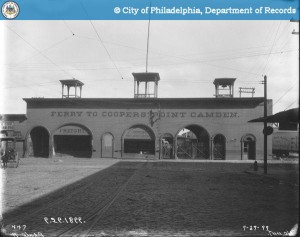 The first major boat landing on the Delaware River was established in the 1600s immediately south of the location of Pier 19, where Vine Street (originally called Valley Street) and the river intersects. Hunters and traders from settled territories in New Jersey crossed the river and docked at the landing to get to what would soon become Pennsylvania, because the valley there offered easy access into the region’s interior.

In 1683, William Penn dedicated the Vine Street Landing that was built on the site for public use and it quickly became one of the busiest ferry landings on the Delaware. In the early 1700s, the landing primarily served the Upper Ferry (also known as “Upper Billy’s Ferry”) and was operated by Samuel Cooper until he retired in 1790. His son William Cooper took over management of the route. The Cooper Point Ferry Company was purchased by the Camden and Atlantic Railroad Company in 1856 and was renamed the Cooper’s Point and Philadelphia Ferry Company, though it was commonly referred to as the Vine Street Ferry. It was the oldest ferry service in America when the company went out of business in 1926 after operating continuously for more than two hundred years.

The First Among Piers

In 1907, the Pennsylvania legislature and the City of Philadelphia established the Department of Wharves, Docks and Ferries as a division of the Philadelphia Department of Commerce. The department replaced the Board of Port Wardens, which had directed Philadelphia’s harbor activities since 1766. Pier 19 was the first of a series of municipally owned piers along the Delaware that the city built. The warehouse facility, also called the Vine Street Pier, was a double-decked concrete and steel superstructure with a fireproof overhead shed. It was supported by thousands of wooden piles pounded into the bed of the river. The Philadelphia construction firm W. S. P. Shields–which won the contract after placing a $339,000 bid–built the pier 166 feet wide and 571 feet long. It was the biggest pier on Philadelphia’s waterfront at the time. Work was completed on November 4, 1911.

River side of Pier 19 North, also known as the Vine Street Pier, in 1919 | From phillyhistory.org.

The construction process did not go smoothly. Philadelphia taxpayer Owen J. Roberts filed a lawsuit against Shields and city officials with accusations that the construction contract was arranged illegally. Roberts contended that McClintic-Marshall Construction Company of New York City was the lowest bidder at $314,000, but their bid was rejected because of local union labor opposition. Though Roberts sought to set Shields contract aside, the courts ultimately refused to enjoin it.

Once complete, the city leased the north side of Pier 19 for $12,000 a year to the Philadelphia & Gulf Steamship Company, which provided weekly passenger and freight service to New Orleans and all other ports in the Gulf of Mexico.

The P & G Steamship Company line was established in 1908, though it did not last long and filed for bankruptcy four years later. Hearings at the Interstate Commerce Commission later revealed that the competing Morgan Line, based in the Gulf of Mexico, had engaged in underhanded business activities designed to drive the Philadelphia firm out of business. The Morgan Line secretly purchased Philadelphia & Gulf’s manifests and circulated rumors that the line was unable to charter a sufficient number of vessels.

North Atlantic & Western Steamship Company took over the north side of Pier 19 after P & G departed and operated a fleet of vessels between Philadelphia and Boston on the East Coast and along Pacific ports on the West Coast. Freight was loaded and unloaded onto ships from railcars on two tracks leading into the facility from the Philadelphia Belt Line Railroad on Delaware Avenue. 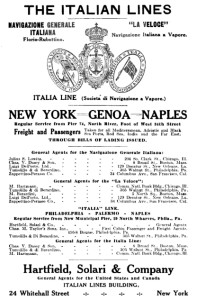 Advertisement for the Italia Line | From the 1914 Exporters’ Encyclopaedia, Volume 10.

The south side of Pier 19 was leased to the Genoa-based passenger shipping company, Italia Società di Navigazione a’Vapore (the Italy Steam Navigation Company). Known as the Italia Line, the company provided regular transatlantic steamship service between Philadelphia and Italy, particularly Palermo and Naples, for ten years.

In the early 1900s, Congress began funding new immigrant stations around the country and traffic at Ellis Island began to lessen. The Washington Avenue Station, Pier 53, was demolished in 1915 to build a larger replacement, but the onset of World War I prevented these plans from materializing. Immigration activity slowed to a crawl at both Pier 53 and Pier 19. Immigration restrictions in the 1920s brought an end to fifty years of direct migration to the Port of Philadelphia.

The Vine Street Pier remained under city control as a functioning municipal pier over the next few decades, but its usefulness for commercial shipping activity began to diminish by the 1960s. Container ships and the rise of the trucking industry after the Interstate Highway System was built rendered the original Philadelphia port infrastructure inefficient. The city’s cargo-handling operations were moved to new, more spacious port facilities at the 112-acre Packer Avenue Marine and the 116-acre Tioga Marine Terminal. 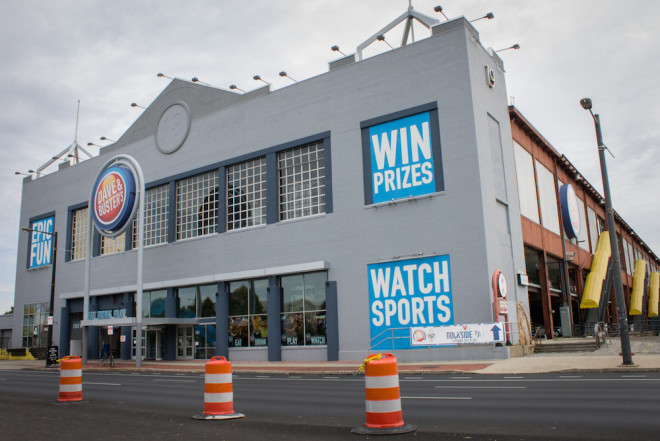 Dave and Buster’s at Pier 19 was one of the first successful attempts in reactivating the largely unused waterfront for leisure and entertainment when it opened in 1994 | Photo: Michael Bixler

In the 1990s, Pier 19 North briefly became a site for public events and was a precursor to the nearby Festival Pier at Penn’s Landing. In 1991, Philadelphia Magazine hosted their 18th annual “Best of Philly” party there. Entrepreneurs Dave Corriveau and Buster Corley opened the fifth of their Dave and Buster’s restaurant and entertainment chains inside the pier in 1994 after investing $11 million in the 70,000-square-foot space. The combination arcade and sports bar remains a popular destination for both adults and children today.