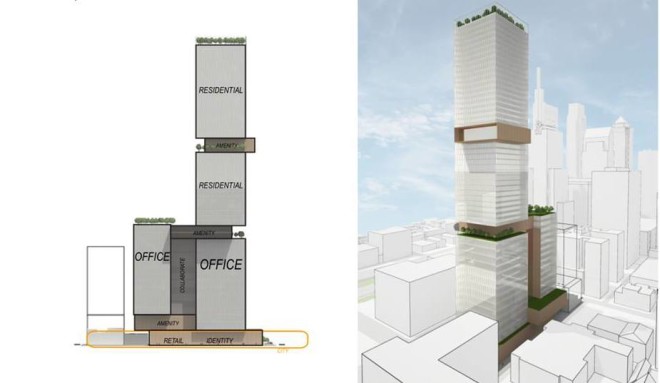 Earlier this month, Skyscraper Page’s band of development nerds managed to do the impossible and out-scoop the Philadelphia Business Journal–they leaked preliminary site plans and renderings of Brandywine Realty Trust’s plan for the 2100 Market site. And the plan is a marvel: a continuation of the developer’s forward-thinking architecture from the shard Cira and FMC towers.

The architects, NBBJ, are among New York’s best, with a large and diverse body of work, including a major Amazon.com tri-sphere biodome project planned for Seattle’s Denny Triangle neighborhood to major sports stadiums like good ol’ Lincoln Financial Field, the renovation of Pauley Pavillion at UCLA, and the massive Hangzhou Olympic Sports Center on the Qian Tang riverfront in China.

Rumors have in fact been milling about Brandywine’s next Center City investment. The erstwhile development firm is halfway done the FMC Tower, and finishing up work on its new apartment proposal at 22nd & Market. An ambitious company, the kudzu grapevine has them also wooing Du Pont spin-off Chemours to an entirely new Cira tower to be built next to 30th Street Station, only a block from FMC.

In addition, Brandywine has made aggressive purchases both on Market East and Market West over the past year. They now own the parking garage at 7th & Market, as well as the former Basciano holdings on the 2100 block of Market. This is the same block that saw the fatal Salvation Army building collapse in 2013.

At 2100 Market, the main development challenge is a firehouse a third of the way down the block–an ill-fitting, low-slung garage that nevertheless provides a necessary civic service, and one City officials aren’t interested in relocating. Any proposal for this block must, therefore, work around it. Brandywine offers an interesting solution: cantilever the offices above the firehouse, thereby integrating the single-story structure into the high-rise fabric marching down the street.

From there, the proposal continues its simple, but effective strategy. The fundamentally boxy design is broken up by offset amenity floors–one between the retail and the offices, one above the offices, and one halfway up the residential portion. A collaborative area in the middle of the office floors is defined by cutouts as well. 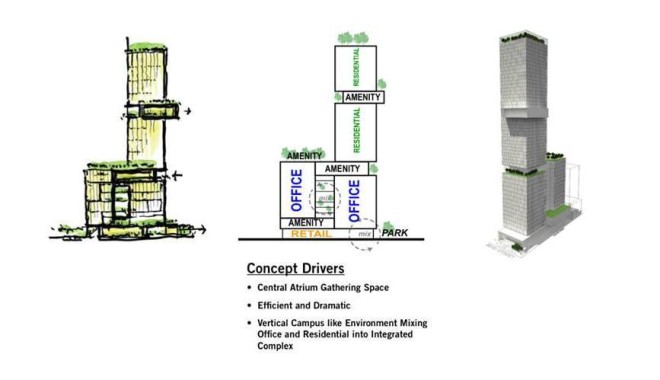 These offsets and cutouts are also shown in brown in the renderings, indicative of a façade strategy that breaks one big glass box up into several smaller, more easily digestible glass boxes–a fundamental departure from the Cira shards, whose façades have a crystalline feel about them, an effect requiring one continuous curtain wall. Even boxier, all-residential Evo’s façade is a solid glass curtain wall. This would be the first example of this type of design–evocative of cubism–in Philadelphia.

This is a preliminary design. It’s impossible to know how this building will turn out from an urbanism standpoint until it’s actually built, but in terms of boldness–yes, this has it.