An Ambitious Publisher And His House Of Timber 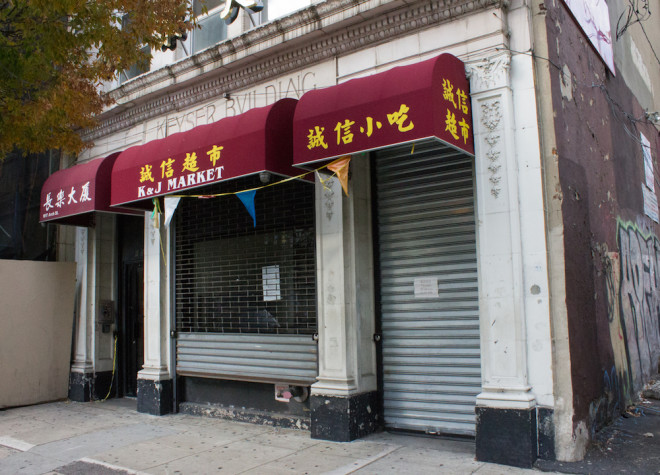 The Keyser Building at 1017 Arch Street has long been absorbed by a growing Chinatown. The former publishing headquarters of William H, Keyser & Co. was converted into condominiums in 2008 | Photo: Michael Bixler

During the late 19th century until the mid-1930s, Chinatown was the city’s epicenter of printing and pharmaceuticals. I’ve examined a few of the printing and publishing houses still standing there, namely the seductively slender Bird Building and the Winston Building, with its ivory facade and trademark, green cornice. At first glance, the Keyser Building on Arch Street may not stand out like these other two buildings. However, this particular printing house is quite unique due to the extraordinary man it is named for and the unusual construction technique used during an era obsessed with fire safety. 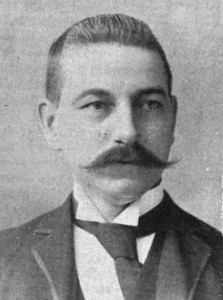 A man with a plan and a mustache that means business. William H Keyser in 1893 | Source: Portraits of the Heads of State Departments and Portraits and Sketches of Members of the Legislature of Pennsylvania. E. K. Meyers Printing House, 1893

William H. Keyser was an ambitious child. He quit school when he was 15 to work at Leary’s Old Book Store, a city landmark near 9th and Market that was the oldest used bookstore in America when it closed in 1969. Over nine years he taught himself the ins and outs of the publishing industry. Keyser started his own publishing company, William H. Keyser & Co., at the young age of 25 and set up shop at the corner of 10th and Market. In only three years, he was producing all of Philadelphia’s school and college textbooks as he provided them at a lower price than any other comparable company in the country. When Keyser turned 29, he was elected to the Pennsylvania House of Representatives (after an unsuccessful run two years earlier). Over the next few years, he passed landmark legislation for transit–giving “wheelmen” (bicyclists) right-of-way, transportation companies the ability to own real estate, and pushed the General Street Passenger Railway Act through the PA House. While chairman of the legislature’s Insurance Committee, Keyser was appointed to the Judiciary General Committee without ever earning a degree or practicing law.

While Keyser immersed himself in politics his printing company continued to expand, moving frequently around the city to accommodate their burgeoning business. At the beginning of the 20th century the company began construction of their own official headquarters. In October, 1904, Willam H. Keyser, now a Pennsylvania senator, bought the old Isaac F. Baker Estate at 1017 Arch Street to build a new company flagship on the site. The 25′ x 170′ property took a prominent position in what was then Philadelphia’s center for both printing and pharmaceuticals. The publishing company’s new office would be much more commodious and luxurious than their previous space at 1021 Filbert (now the site of the Greyhound Bus Station). The new $50,000 facility would be six stories. In addition to Keyser’s printing space, the building offered 3 floors of leasable space.

This was the era of heavy duty fireproof buildings, but Keyser didn’t want to spend the extra money for traditional construction materials of this caliber. He instead opted for slow-burning mill construction, a method that uses heavy timbers designed to burn extremely slowly if exposed to fire. Fire-stops, a series of incombustible automatic hatchways and a protected stairwell, were utilized to prevent fires from spreading from floor to floor. Keyser used fire retardant construction techniques such as eliminating space between wooden lath and plaster, covering ceilings in asbestos and wire-lath plaster, and installing sprinklers and hydrants. 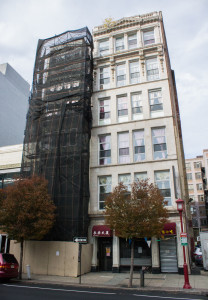 Despite the popular use of advanced fireproofing construction material of the era, Keyser chose cost-cutting timber supports and a system that allowed for slow burning in the event of a fire | Photo: Michael Bixler

Though cost-effective, there were plenty of disadvantages to this type of construction. Structures built in this manner vibrate much more than those with steel girders and concrete floors. Columns need to be placed much closer together, causing considerably less space to be used on the factory floor. The timber girders are susceptible to dry rot. Given height limits of the period, the vast majority of buildings constructed this way were under four stories. The new Keyser Building was six.

One particular advantage of using this kind of construction technique is the speed of completion. It took only seven months from purchase of 1017 Arch property to having the company up and running in the new building.

The building is remarkably sophisticated given the speed of construction. Its thin stone exterior portrays an elegance rarely found in a factory building: completely white and delightfully imbued with just the right amount of architectural detail.

Keyser’s operation only held the first three floors of the building. The Mississippi Pearl Button Company, Frank J. Meyers Bookbinders, and several other companies came and went over the 30 years William H. Keyser & Sons used the location for its headquarters.

After Keyser died in 1930 at age 75, the Fidelity Philadelphia Company bought the building and leased space to Keyser’s shrinking firm for another five years. FPC later overhauled the building to make way for a rug and lineoleum business that used the upper floors of the building. A restaurant occupied the storefront at street level.

By the middle of the 20th century Chinatown’s expansion was well underway and the area’s printing companies began to move elsewhere. During this period the Keyser Building became known as the Printing Crafts Building where several small publishers operated.

By the early 1970s rug and linoleum companies had moved back in. The building was owned during this period by the firm of Lanard & Axelbund, the “L & A” in the contemporary real estate firm Colliers L & A. In 1974, brothers Herman and Nate Passon bought the building and moved their 30-year-old sporting goods company, Passon’s Sport Center, into the space. They produced, distributed, and sold sports equipment and paraphernalia there until the late 1980s. William Lehmberg & Sons Masonic Clothing and Accessories then briefly occupied the building. 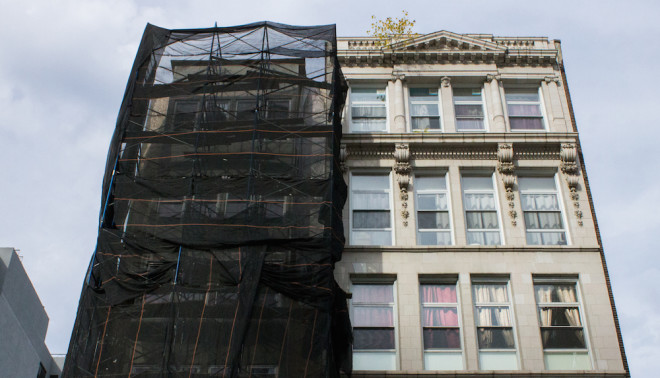 Difficult to see at ground level, but the Keyser Building cuts an elegant figure with 6 trim stories, a stately cornice, and shapely corbels. Its neighbor, however, appears to be going through a goth phase | Photo: Michael Bixler

In 1994, new owners took over the building and converted the upper floors it into a clothing factory. Fourteen years later, the same owners converted the entire building, save the ground level store front, into condominium units, which is how it stands today.