Many of the city’s street trees are parched, with brown-edged foliage or none at all, giving the alarming appearance of a citywide die out. Some trees may indeed be dead or in a state of early dormancy induced by the combination of summer heat and drought, which, until last weekend, has carried into September. August’s summer temperatures were not as hot as in years past. However, the ambient humidity has been unseasonably low–something that most of us prefer, but not necessarily of benefit to the local plant community. This combination of low humidity and consistent heat has exacerbated the transpiration of water through the leaves and has wilted and desiccated of our local foliage. 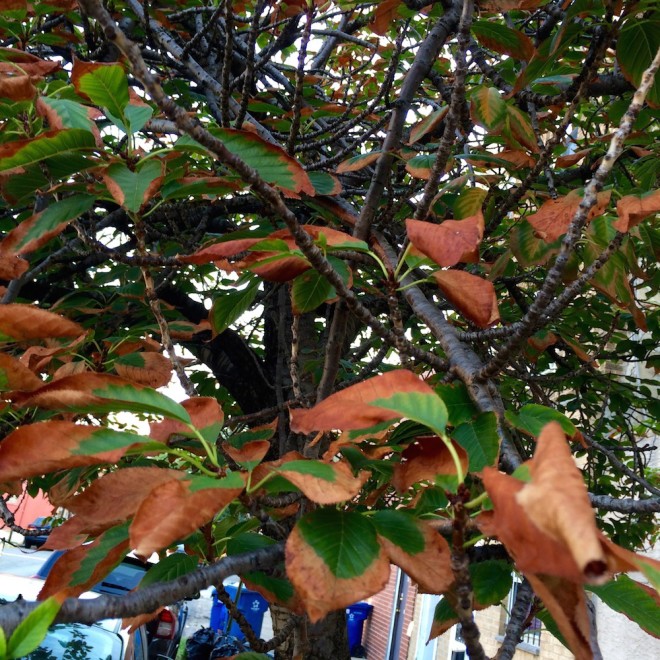 Not all trees seem to be stressed equally and some do not appear affected at all. Red Maples, Lindens, and Katsuras seem to look the worst; Zelkovas and Sophoras, generally, are holding up. The reasons for this are varied, but they can be attributed to one (or a combination) of three general factors. The first is genetics, which can account for some of the difference in response by various trees to the droughty conditions. The second factor is their site situation, or micro-environment. The third is nurture, or the care given to the trees. When genetics, micro-environment, and nurture work in tandem, the effects of the drought can be exacerbated or lessened.

Death and the Dry Spell 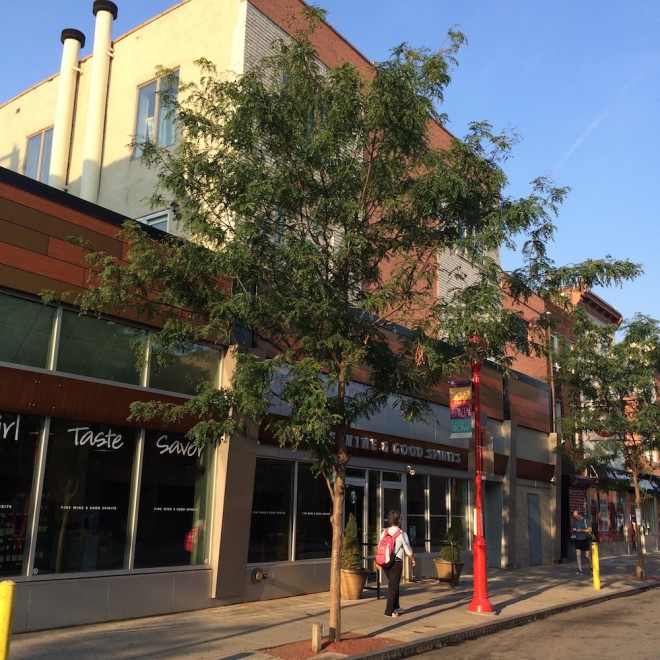 Some trees are genetically able to withstand periods of drought with little or no leaf loss. Others compensate for the lack of hydration by losing their foliage, thereby conserving water by cutting back on their transpiration rate. When the rains return they re-leaf. This is the cycle for trees in tropical climates that have a regular seasonal variation of wet and dry.

Philadelphia has a non-tropical climate that is typically and more or less uniformly sprinkled by Mother Nature throughout the year. Not this summer. Trees all across the city have lost foliage due to the August drought. In the Philadelphia climate, the re-leafing of trees stressed by drought is best if it happens the following spring, when temperatures are rising, days are getting longer (creating a better photosynthesis environment), and there is lots of moisture in the soil. In the fall, temperatures are going down, days are getting shorter, and the sunlight is growing weaker. The leaves that come out in the fall are the leaves that would have normally emerged the following spring. If the tree re-foliates in the autumn, the tender new growth may be damaged or even destroyed by frosts as winter approaches. 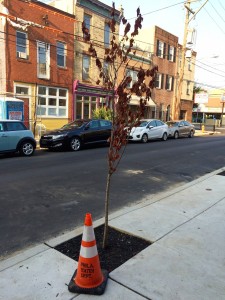 Recently planted cherry tree on Bainbridge Street. The cone was not enough. The tree actually needed water from the Water Department.

The freezing can cause the loss of next spring’s buds, as they have not had enough time to form and mature on the new and tender fall growth before the onslaught of freezing weather. The tree, therefore, does not leaf out in the spring. The next spring’s buds that sprouted in the fall had insufficient time to grow another set before the winter cold set in. The tree dies.

Generally speaking, younger trees and recently planted trees are the most vulnerable to death by drought, even if they are considered to be very tolerant once they are established. Younger and newly planted trees do not have the extensive root systems of older and more mature trees. These systems provide the tree with wider access to soil volumes that may have a bit more moisture to sustain them until the next rain or irrigation cycle. Newly transplanted trees dug from a nursery field or relocated within a property can be quite stressed by the process of being transplanted. They can lose many roots in the process. It can take them a few years or more to recover. The stress of root loss makes the tree vulnerable not only to drought, but also to attacks by insects, bacteria, and fungus. The uncontrolled presence of these latter “3 Horsemen of the Botanical Apocalypse” in the presence of drought stress induced by root loss can work in concert to accelerate the death of the tree. Nursery trees grown in containers that are not root or pot bound do not suffer the same degree of shock when planted in the ground as those trees that are field dug. The sensitive care of young and newly planted trees by watering and controlling pests and diseases is an example of nurture trumping nature. 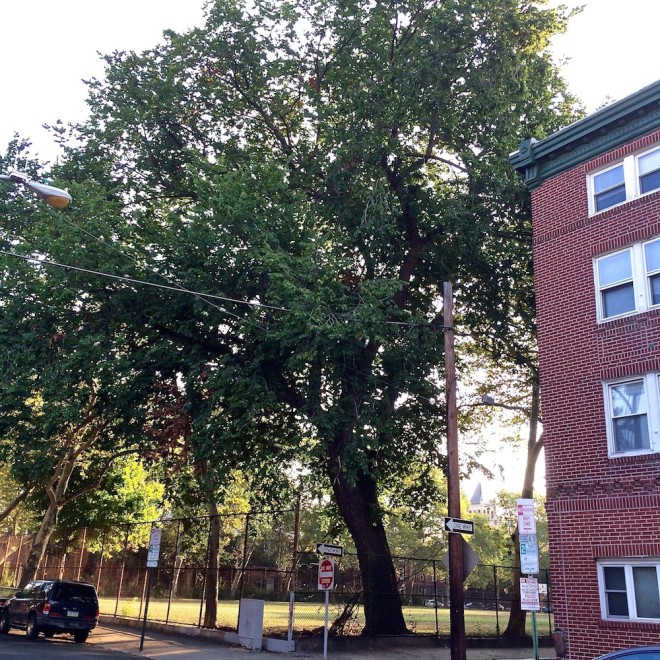 Site situation is an important factor that comes into play in the survival of trees during a period of extensive drought. The micro-environment of the tree can make all the difference between life and death. The tree pit, a human invention, is an important micro-environment. Trees in nature do not grow in tree pits, but rather in various soil matrices that may be quite extensive, either in extent or depth or both. The roots grow in response to the presence or absence of soil moisture and nutrients. Trees are also living organisms in balance more or less with their environment. Small trees have small root systems. Large trees have extensive root systems. All trees have root systems that extend way beyond the limits of their canopy of leaves when we let them. In Philadelphia, we plant potentially large trees in very small holes. We even plant very small trees in even smaller holes. Most of the time tree pits act like pots. The roots are limited in their ability to find nutrients and moisture due to the limited size of the pit. 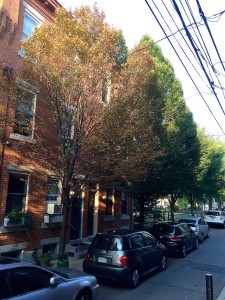 The two foreground trees are European Hornbeams (Carpinus betulus ‘Fastigiata’). The one on the left very drought stressed. The next tree to the right that is green is getting the benefit of the irrigation that is put on the shade garden in Cianfrani Park that is immediately around the corner from the last row house. Water from the irrigated bed is reaching the roots of this Hornbeam. The farthest tress along the edge of the park are Zelkovas (Zelkova serrate) | Photo: Dennis McGlade

If the pits are so small, why do some of the trees in the city still get very large? Trees planted before the use of heavy machinery, particularly for excavation, had the advantage of the surrounding soil not being very compacted from the construction or excavation process. Their roots could penetrate the pit walls. In the old days the pits were dug by hand as was any of the excavation around the pit. It has been observed that trees more recently planted, in the age of heavy equipment, send their roots into the drainage gravel layer that is laid immediately beneath pavements. This environment does not have a lot of nutrients in it, but is usually moist, contains lots of air, and is very easy for the roots to invade. In effect, the pavement becomes the mulch.

In some cases the tree roots get access to water from leaky water pipes and sewers, the latter supplying perhaps a bit of nutrient. However, the sewer may also dissolve toxins in its water. Urine is not irrigation or fertilizer. Hundreds of applications of dog urine applied to the same small area of the urban tree pit concentrate the salts and other chemicals either in the pit or on the base of the tree trunk. This damages the bark that protects the circulatory system of the tree that is usually immediately adjacent to it. The effect is called ammonium toxicity. Urine salts also form a crust on the soil surface that impedes the absorption of rain water, and the salts in contact with the roots also pull water out of the root system producing a reverse osmotic effect. This is the reason that deicing salts in the winter can be devastating to street trees. They not only get into the soil, but they also can be atomized through the air by passing traffic.

Mechanical damage to the trunk that removes or damages the bark sets up the tree for failure as well. The damage can provide an entry point for pathogens and insects. It can interrupt the flow of nutrients up and down the trunk from roots to leaves and vice versa. A tree weakened this way will be more susceptible to the ravages of drought. Bicycling is great for the environment but tree trunks are not bicycle racks. Using them like they are defaces the bark and can cause terminal damage to the tree. 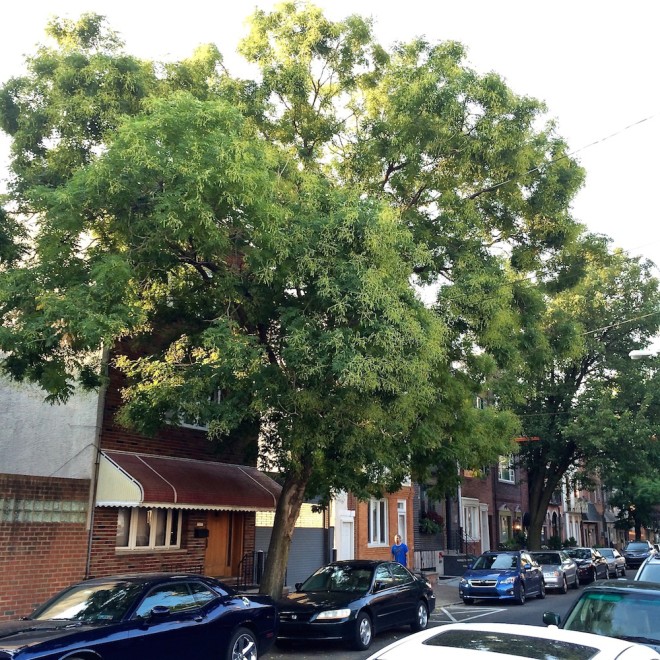 These Japanese Pagoda Trees (Sophora japonica) seem not to be drought stressed at all | Photo: Dennis McGlade

Care is an important, determining factor in a city tree’s survival or demise. Avoiding deicer salts on treed pavement (outlawed in snowy places like Berlin), or using only eco-friendly deicing alternatives is key to keeping city trees safe. If deicing salts are used, then flush the pits out with lots of water in the spring to remove the salt. Water street trees regularly for the first year or two after they are planted and then as required during periods of drought for the next three to five years until they become well established.

The old bromide says plant a $10 tree in a $100 hole. Excavate larger tree pits. For paved areas in commercial and civic situations, there is new technology for bridging the pavement over large tree pits that extend underneath the paved surface. Install an irrigation system for these sorts of tree pits and maintain the system. If one has limits on the size of the tree pit, then plant smaller trees. Select varieties that have proven they can survive and thrive in urban Philadelphia. 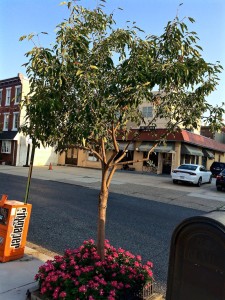 Finally, plant more trees. In spite of this recent drought the odds of trees surviving in this city are very good. They shade our streets and building façades, mitigating the urban heat island effect. Trees create habitats for city wildlife, and their leaves release oxygen into the air through photosynthesis and intercept particulate matter. A row of street trees can visually unify a city block lined with buildings of disparate architectural design. They bring a touch of natural mutability into the somewhat static urban realm–they grow larger (with nurture), they lose and regrow their leaves, sometimes they flower and fruit, and their foliage may change color from spring to summer to fall. City street trees are truly part of our urban infrastructure within the public realm. As such, they jostle for space with pedestrians, utilities, cars, etc. Room must be found for them if the urban is to become the urbane.

Yale University School of Forestry just published a global tree count for the entire world. They estimate that there are 3.04 trillion trees on the globe. The ratio of trees to people is 422 to one. That may sound impressive, but not so much when the stats further state that the difference between forest regeneration and deforestation by human activity results in a net loss of 10 billion trees a year. Do your part and observe this famous Chinese proverb: “The best time to plant a tree is 20 years ago. The second best time is now.” 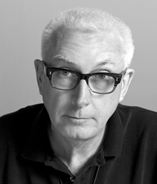