First African Baptist Church, the oldest African American congregation in Pennsylvania, the 19th century West Philadelphia block of 3600-3630 Lancaster Avenue, and the Edward Corner Marine Merchandize Warehouse on Delaware Avenue–each vulnerable to demolition–came closer to legal protection this morning. The three high profile building nominations were approved and recommended by the Designation Committee of the Philadelphia Historical Commission. If approved by the full Commission on October 9, they will be added to the Philadelphia Register of Historic Places. 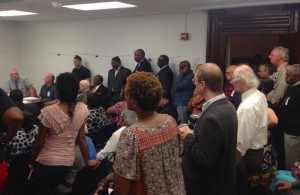 Big crowd in support of saving the First African Baptist Church from sale and demolition gathered this morning in Room 578 at City Hall | Photo: Michael Bixler

The future of the 105-year-old First African Baptist Church at 16th and Christian–designed by Watson and Huckel–has been uncertain since the City’s Department of License and Inspections cited the building for being imminently dangerous after the east wall began to collapse in June. In addition to L&I’s report, the City has ordered an independent engineering report to balance an assessment of the building’s current condition. As of last Sunday, the church’s congregation continues to hold services inside the sanctuary.

Against the wishes of some members of the congregation and the public, Terrence D. Griffith, senior pastor of First African Baptist since 2001, believes that the church is in irreparable condition and stands as a financial burden and a threat to safety. “It is a 19th century church. The building’s systems are inadequate. It would cost millions to refit,” said Reverend Griffith. “If you want to make it about preservation, you need to put your money where your mouth is.” Rev. Griffith believes that the only recourse for the congregation is to sell the building for $3.2 million to a developer who will demolish the building and redevelop the lot. The congregation has not authorized the plan to sell the church.

The church was founded on June 19th, 1809 by freed slaves from Virginia. Two former members sold themselves into slavery to free Reverend Henry Cunningham, the congregation’s first pastor.

“It was a refuge. A great rock in a weary land,” said Faye Anderson, a supporter of the church.

“For those of us born in Philadelphia, it is horrendous that we are willing to tear this building down and not willing to respect those that came out of slavery and built this church,” said another public supporter.

Mo Booker, longtime congregation member and supporter of selling the church, said that “The idea is more important than the building,” and that true heritage lies within the people, not the church itself. 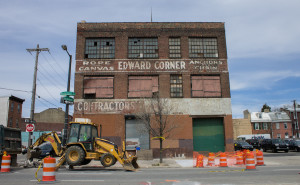 After the contentious air settled in the hearing room, Richard Dilworth III, chair of the Committee on Historic Designation, made a point to clarify that recommendation and approval of designation does not factor in the condition of a building when considering a nomination. “If the building were to collapse tomorrow it would still be considered historic. The question of how much it would cost to stabilize and rehabilitate is a financial hardship issue,” said Dillworth.

The Committee voted unanimously to recommend approval of the nomination, which was submitted by architectural historian and Hidden City Daily contributor Oscar Beisert.

The 3600 block of Lancaster Avenue (3600-30), an intact row of Victorian storefronts and apartments, were unanimously approved for recommendation as well. The nomination was submitted by Farnham (a nomination for part of the block, written by Beisert on behalf of the Powelton Village Civic Association, was also approved). The buildings on the block were constructed between 1870 and 1880 by speculator James L. Wilson. The stretch of buildings and their remarkable, uniform cornices are zoned CMX-2 with a 38’ height limit, enticing to student housing developers. The block was restored in 1987 to Secretary of the Interior Standards and remains the most intact Victorian streetscape in West Philadelphia.