Editor’s Note: Seven blocks east of the bustling intersection at Broad and Olney, the second busiest transit stop in the city, lies a vibrant stretch of commercial storefronts on North 5th Street. Sometimes referred to as “Koreatown,” there is as much celebrated diversity in the area’s demographics as there is in the goods and services offered. As many as 340 businesses line the North 5th Street’s shopping district between Roosevelt Boulevard and Godfrey Street. The storefronts seemingly maintain the friendly atmosphere of a small town Main Street amidst high-turnover parking, frantic SEPTA bus routes, and a never ending stream of deliveries, shoppers, and pedestrians. Most are independent, family-operated businesses, and a great many are owned by immigrants. Yet some merchants have been in business long enough to serve the children and grandchildren of their oldest customers.

Contributor Theresa Stigale last visited North 5th Street in the 1980s when the Schwarzwald Inn still served German food at 2nd and Olney. A lot has changed since then. This summer, she sat down with Philip Green, director of North 5th Street Revitalization Project, to discuss community engagement and advocacy along the corridor and, camera in hand, she took a walk around the diverse stretch of storefronts to meet many of the merchants along the way. 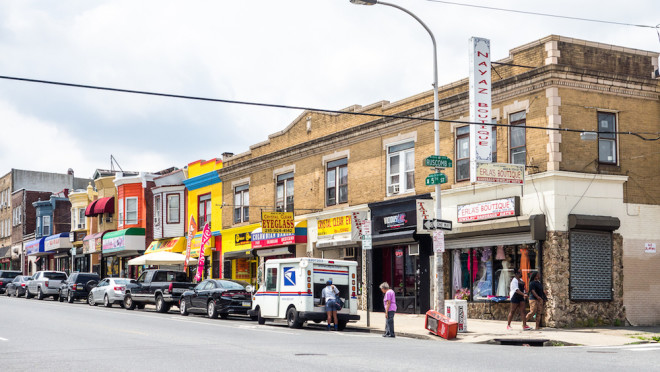 Olney in North Philadelphia is a quiet neighborhood with a thriving shopping district. About a half-century ago, the neighborhood was predominately ethnically German. Now, it is one of the most diverse places in Philadelphia, anchored by a large Korean immigrant community. The area has maintained lasting economic strength through the efforts of active community members, supportive merchants, and the staff at the North 5th Street Revitalization Project.

The neighborhood advocacy group was founded in 2005. It joined the Korean Community Development Services Center in 2008 to receive grant funding from the Philadelphia Department of Commerce to hire staff and develop a comprehensive plan for the corridor. “By aligning with the Korean group, we were able to receive important administrative services and 5013c nonprofit status,” says N5SRP’s director Philip Green. The Korean CDSC is the fiscal sponsor of the project. N5SRP maintains its own office, brand, and programming. The cooperative project’s primary goal is to improve the quality of life for neighboring residents and business owners along 5th Street. 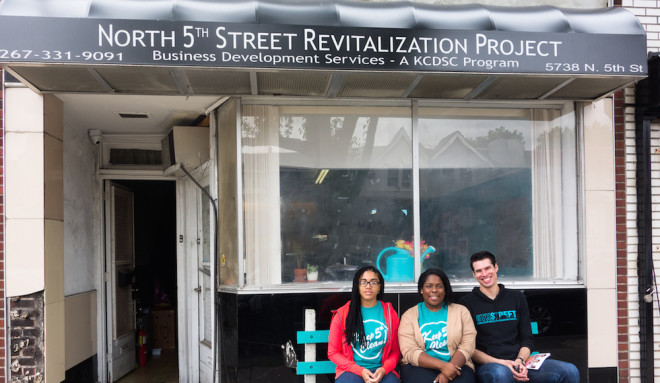 N5SRP is still largely unknown outside of the neighborhood. The staff is presently working on a promotional website for the district that will feature business listings and articles highlighting North 5th Street’s top options for food and shopping. Green says his staff is designing a pocket directory, “that will fold out into a colorful map of the district.”

The City funds N5SRP through its Targeted Corridor Management Program. There are over 200 commercial corridors in Philadelphia. The Department of Commerce focuses on 18 select corridors and supports them with federal funds directed through the U.S. Department of Housing and Urban Development. These funds are disbursed through block grants to corridor managers. The grants aid in bolstering local community shopping areas in low to moderate income neighborhoods. Along with a TCMP grant, the N5SRP receives an additional $6,000 per year from the Philadelphia Activities Fund, provided by Councilwoman Marian Tasco. N5SRP membership dues from area merchants add additional income. Merchants pay between $25-$365 per year and receive membership certificates to display at their cash registers. 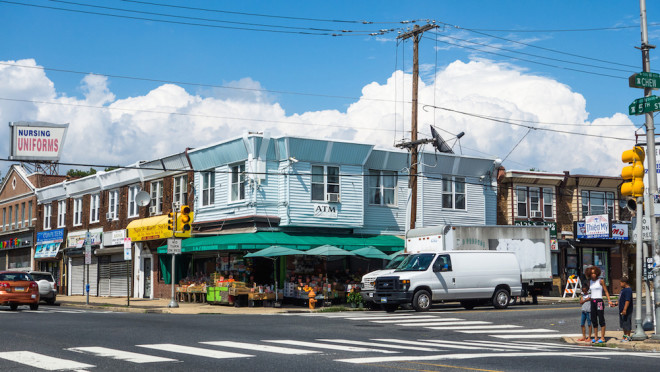 A produce stand the corner of 5th and Chew Streets and ethic food markets fill the in for the lack of a local grocery store | Photo: Theresa Stigale

One of the primary uses and contractual terms of the block grant is to provide cleaning and corridor management services for the one and half miles from Roosevelt Boulevard to Godfrey Avenue. N5SRP also expands its reach to assist independent businesses on some of the smaller streets off of 5th Street. The grant money is most noticeably applied to the thirty hours of sidewalk cleaning each week. “This has made the most visible and huge impact on the perception of our corridor,” says Green. “Our goal is to stop trash at its source by educating residents and pedestrians on the perception of cleanliness and neighborhood pride.” Green says that the annual citywide Philly Spring Clean Up day is a substantial supplement to the street work that is done throughout the year.

Cleaning, streetscape, and management service are just a few of the ways N5SRP contributes to the community. “Public safety, business assistance, and community collaboration are also priorities,” he says. Along with assistant director Stephanie Michel and community and economic development assistant Sabrina Lomax, Green coordinates all of the public activities and outreach events along the corridor. 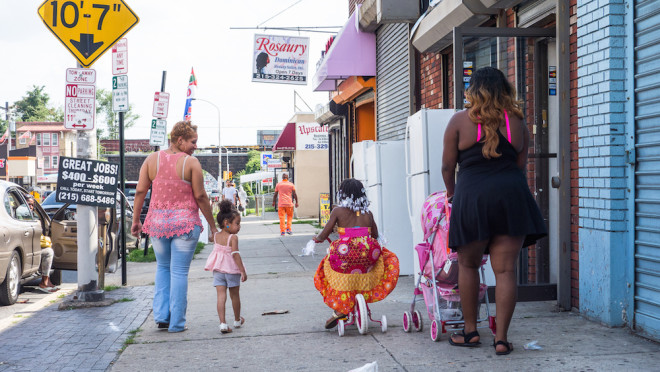 Young neighbors greet each other as they make their way down North 5th Street | Photo: Theresa Stigale 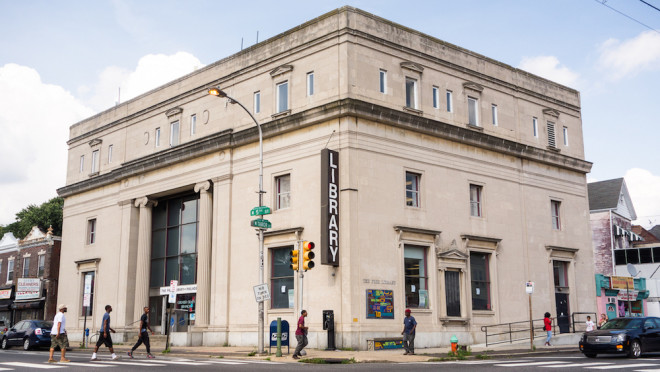 The Greater Olney Library at 5th and Tabor Streets opened in 1949 inside the former Olney Bank and Trust Company building | Photo: Theresa Stigale

A central part of N5SRP’s strategic plan is to act as a liaison between the police and 5th Street merchants and to help build trust. Meetings are held twice a year to encourage communication. The organization’s Merchant Safety Program provides free education and consultation for store owners. “We found that shoppers want to be able to see clearly inside a store before entering,” says assistant director Stephanie Michel. “Some customers are wary of businesses that completely block their front windows with large posters and ads, and don’t feel safe shopping there. We encourage the merchants to display their goods in a creative an inviting way, so as to encourage walk-ins.”

N5SRP partners with neighborhood residents, religious organizations, and area nonprofits and is spawning a new generation of volunteers by encouraging area children to take pride in their community. N5SRP sponsors youth programing like “Open Mic Night” on the second Friday each month at St. Paul’s Evangelical Lutheran Church. They also help promote “Family Movies Under the Stars” hosted by Olney Presbyterian Church.

Charm At The Checkout Counter On North 5th Street 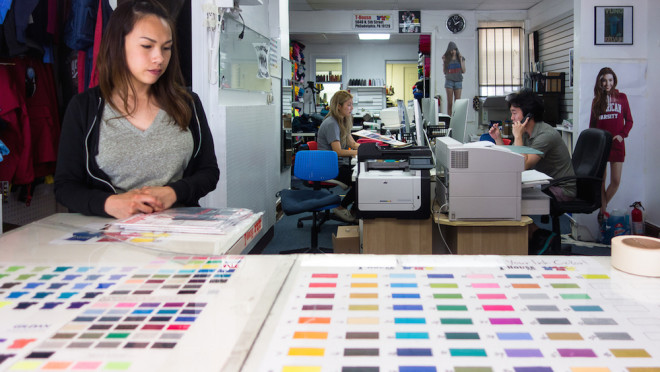 Sammy K. and his family has been in the custom screen printing business for 30 years. After devastating fire  burned their 4-story production facility at 619 Girard Avenue to the ground in 2010 the business moved operations into their original retail location in Olney | Photo: Theresa Stigale

Walk-ins are always welcome at T-House Inc., a Korean family owned and operated custom screen printing and embroidery shop. Opened in 1986, the business offers 57 ink colors to customize t-shirts, hats, tote bags, and hoodies for sports teams, schools, and church groups. “It’s fun for customers to see everything we offer to customize,” says a staff member. 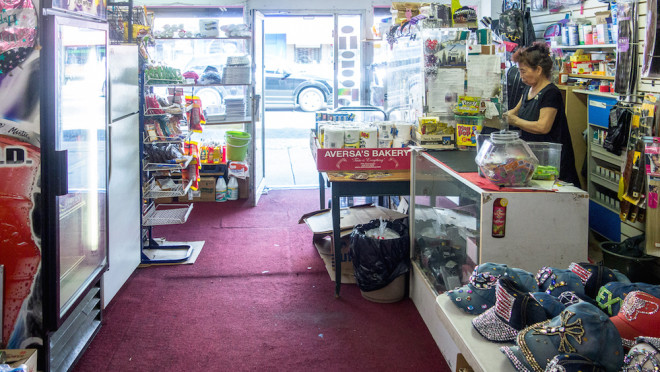 Come for the embroidered baseball caps, stay for the conversation. Mama at the counter at Willy’s Variety Store | Photo: Theresa Stigale

Willy’s Variety Market opens at six in the morning every day. “My clients might need something on the way to work and I want to be here for them,” says the beloved Korean merchant known as “Mama.” She opened the store eight years ago with her husband, who has since passed away. The ATM machine, small bags of chips, and ice cold sodas are always a draw, but some stop in for the friendly conversation. 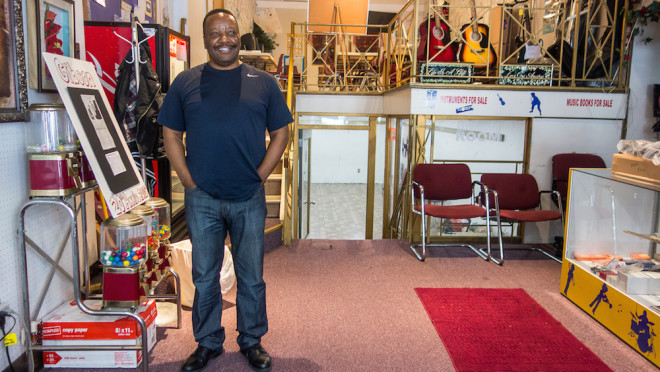 Professor Randy J. Gibson, owner and artistic director of the legendary Gibson School of Music and Arts, answers the door with a welcome smile on a sweltering midsummer’s day. The studios are quiet now, save for the lone organist practicing for her storefront church’s service on Sunday. Formerly Zapf’s Music School and Dance Studio, the Gibson school is comprised of several attached buildings and offers all genres of musical instruction, including Gospel, Rock Jazz, R & B, and Classical. Gibson, who attended the Philadelphia College of the Performing Arts (now part of the University of the Arts), Temple University, and and Combs Music School, is a concert pianist by training. He has performed all over the world and has produced and arranged many notable artists, including Grammy Award winners. The changing multi-cultural community has allowed Gibson to pursue opportunities for instruction ranging from guitar and drum lessons to children’s visual art and drama classes. 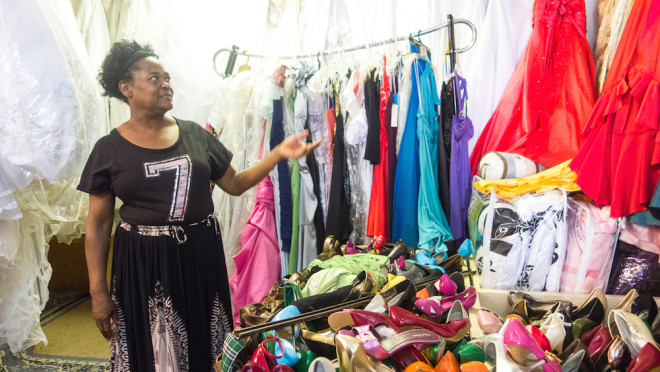 Erla, a reverend and former nurse from Haiti, stands among her many prom dresses and wedding gowns for sale | Photo: Theresa Stigale

“My clientele comes from all over because I have very good prices,” says Alston. “I like my customers to be happy and they come back in all the time. Many of them have become good friends.”

Alston, a former nurse, has been in the apparel business since 1993. She and her husband Reverend Jeffery Alston preside over their own pentecostal Christian congregation at the Primitive International Ministry in Frankford on Sundays. 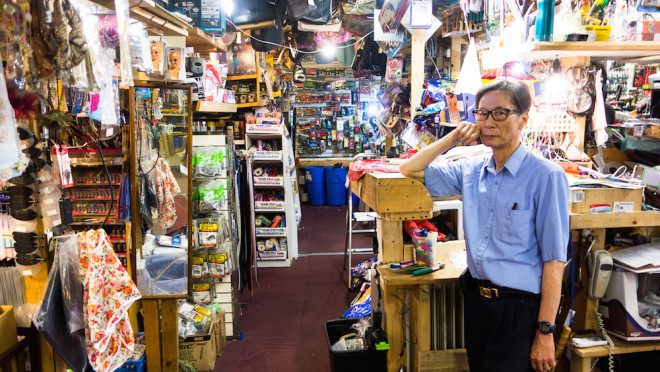 You need it, Mr. Cho’s got it. Young’s Town Hardware is like the swiss army knife of general stores | Photo: Theresa Stigale

Michael Cho stocks Young’s Town Hardware and Discount Store like a modern equivalent of the old fashioned general store. The aisles are jammed from floor to ceiling with hardware, batteries, household goods, cleaning products, and even bamboo plants. Every inch of space is maximized. It’s a quick stop to use the ATM, get a key cut, or grab a bunch of balloons for a party.  Mr. Cho knows his customers well, and his store is consistently one of the busiest and most popular on the block because he sells nearly everything.

Family photos line the walls in Oteri’s Family Bakery, opened in 1904 by Sicilian immigrants Gaetano and Oteri. The family’s original bakery was on Tasker Avenue in South Philadelphia. Now there are four locations across the city including North 5th Street (the others are Woodland Avenue, Fairdale Road, and Domino Lane), which was featured on TLC’s program “Bakery Boss” in 2013. The best sellers at all of Oteri’s locations are cannoli; strawberry shortcake is second. Cookies are sold by the pound and cupcakes start at 75 cents. The bakery now sells gelato. 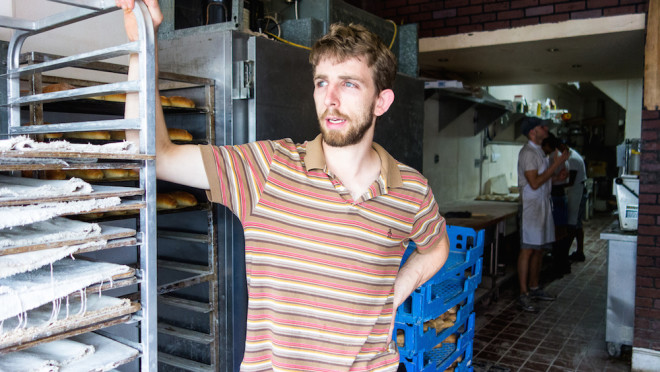 Pete Merzbacher of Philly Breads brings distinctive baked goods to the city from a storefront in Olney | Photo: Theresa Stigale

Pete Merzbacher has no regrets having set up his wholesale bakery, Philly Bread, in a storefront in Olney. He began his business to bake the type of bread he couldn’t find elsewhere, using grains that are freshly milled in-house. Bakers roll out dough by hand on flour-coated floors, the canvas conveyor belt almost reaches the door. Though Philly Bread is a wholesaler, Merzbacher is happy to sell retail to neighbors. Philly Bread is distributed to Weaver’s Way Co-op, Fair Food Farmstand in the Reading Terminal Market, DiBruno Bros., Greensgrow Farms, and a variety of restaurants including Johnny Brenda’s and Prohibition Taproom. Merzbacher’s signature is a “Philly muffin;” he also sells a vegetable bun made with potato flour.

Take a stroll down North 5th Street in Olney. Click any of the photos below to launch the gallery.