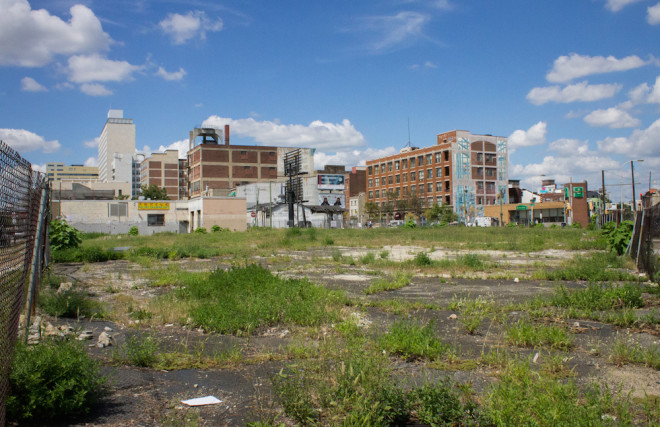 The long vacant, overgrown lot at the triangular intersection of Ridge Avenue, 12th, Buttonwood, and Spring Garden Streets–once Robert Wood’s ornamental iron work foundry–remains a dead space even as its dusty industrial neighbors come to life. Work begins next year on the nearby Reading Viaduct Rail Park and incremental real estate development has begun to change the cityscape around it. In May, planners completed a two-year study that aims to transform Spring Garden Street into a 2.1 mile greenway between the Schuylkill and Delaware Rivers. 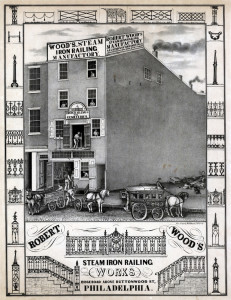 Ornamental cast iron was very popular from the late 18th century through the late 19th century. Cast iron is different from wrought iron because it allows for greater plasticity and more elaborate designs, including raised relief which cannot be accomplished with wrought iron.

Philadelphia iron manufacturers set up foundries around Ridge Avenue and Callowhill Street. Finney & Son at 531 N. 12th Street–a business contemporary of Robert Wood–retains its original storefront today as a tombstone and mausoleum business. The building was vacant until the 1980s when a local sculptor began using the space for a studio. DJ extraordinaire Diplo bought the property in the mid-oughts and used it for a recording studio and the headquarters for his record label Mad Decent. In 2010 the music and arts space Philadelphia Mausoleum of Contemporary Art (PhilaMOCA) moved in.

Robert Wood’s cast iron railings, window guards, and awnings are believed to decorate many Rittenhouse neighborhood townhouses, and the foundry’s decorative chairs and sculptures are often available at local auctions and antique stores. The ornamental iron works also produced many of the cast iron gates and sculptures that adorn Laurel Hill Cemetery, and Wood’s colossal statues of historic figures–Henry Clay, Dr. John Witherspoon, and Abraham Lincoln–are scattered throughout the country. The popular demand of Wood’s lacy, Victorian style fences led the foundry to open a branch in New Orleans and created much of the existing ornamental cast iron work there.

Robert Wood’s enterprise had modest beginnings. He opened his forge in 1839 with only one boy to assist him and operated under the simple name “Robert Wood” until 1849, when the business expanded and its name was changed to “Robert Wood, Iron Rail Foundry and Manufacturing.” By 1853, Wood’s business had blossomed into nearly an acre of workspace with 200 employees. 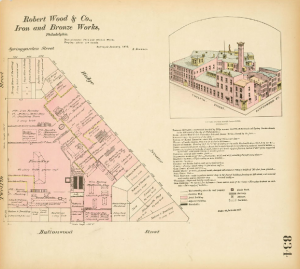 This Hexamer General Surveys map gives a visual orientation of the triangular parcel on which the foundry once stood | Courtesy of the Map Collection, Free Library of Philadelphia

Wood further expanded when he partnered with Elliston Perot, becoming Wood & Perot from 1857 to 1865. Finally, in its last incarnation, the foundry was renamed Wood & Perot Ornamental Iron Works from 1865 until the company went bankrupt and the foundry closed in 1878.

The foundry grew in size as did its ability to take on more sophisticated and labor-intensive projects. Wood began his career simple making window guards and awning posts and worked his way up to colossal bronze statues. His largest iron work was a 15 foot sculpture of Henry Clay for the town of Pottsville, Pennsylvania.

Another large sculpture for which Wood received a lot of attention was the statue of Rev. Dr. John Witherspoon, unveiled in Fairmount Park on the occasion of the 1876 Centennial. Producing such large sculptures in the mid-19th century was quite an undertaking. 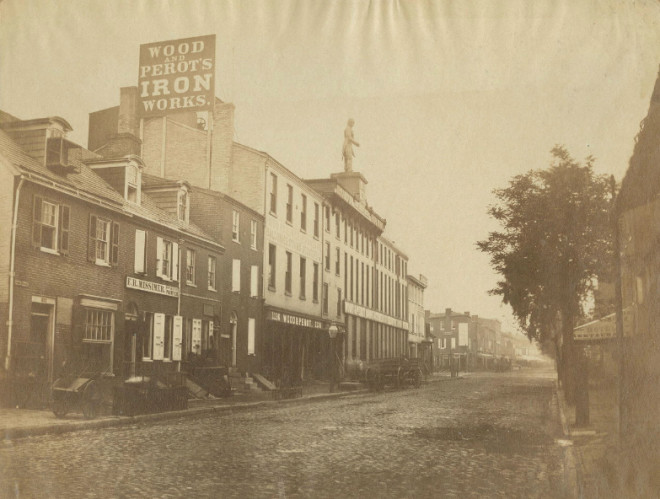 Projects began in the pattern room, where the pattern maker created a wooden model to size, which, alone could take several weeks. The final designs were then taken to the foundry where a mold was constructed form the pattern. Since it was so laborious to produce these patterns, they were kept in a storeroom for future projects. In 1853, Wood’s pattern room was filled with between 3,000-4,000 patterns, 150 of which were fence patterns. (View Robert Wood’s portfolio of original, ornamental iron work archive HERE.)

While the molder was at work, the charger prepared a cylindrical 12 foot tall by 38 inch wide cupola (or melting pot) into working order. The inside of the cupola needed to be methodically stacked with sand, wood, coal, imperfect castings from the previous day, and then more coal and iron. Once the contents of the cupola were lit it would take two hours for the iron to melt. Foundry workers would then spend an entire afternoon bringing ladles to an opening at the bottom of the cupola and filling molds situated all over the room with the liquid iron. 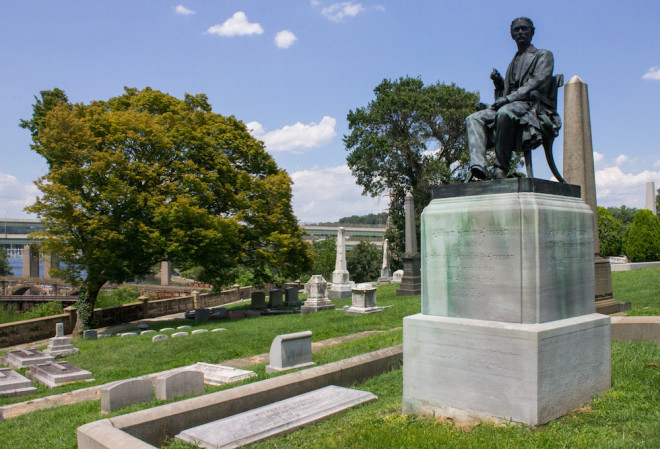 Someone please find Willy’s right shoe. The William Cresson memorial statue in Laurel Hill Cemetery at plot W-284. It is one of many iron sculptures around the country made by Wood’s foundry | Photo: Michael Bixler

Castings were then hoisted into the cleaning room, where they were cleaned with files, wire brushes, and hickory brooms. After cleaning, castings were taken to one of the three finishing rooms at the factory.

There was also a drilling room at Robert Wood’s factory. A blacksmith shop attached to the main building made all of the wrought iron work, and the foreman there marked the position and size of holes needed to screw wrought iron pieces together. Once the necessary markings were made, works would be sent to the drilling room so that the driller could make holes with a drill powered by a steam engine.

A Rotten Ending for Wood

Wood & Perot filed for bankruptcy in 1878, and the company’s inventory of sculptures, ornaments, patterns and patents was sold to various other manufacturers. It is unclear exactly what led to the foundry’s demise, but it is possible that the increasing availability of less expensive zinc statues in the late 19th century cut into the market of the more labor-intensive cast iron works. 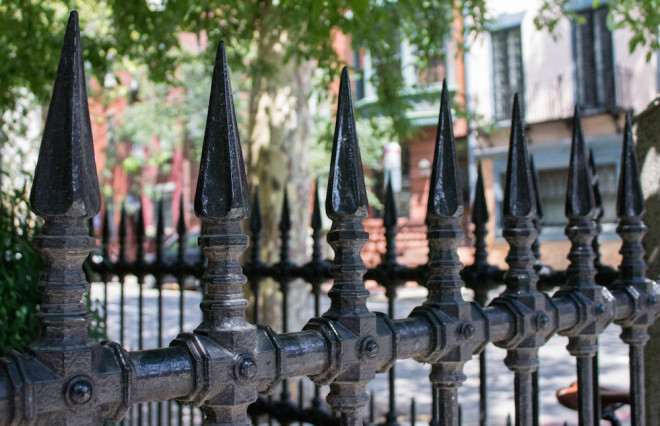 Ornate iron fencing surrounds a home at 18th and Delancy Place. Much of the decorative iron work in New Orleans can be attributed to Robert Wood | Photo: Michael Bixler

After Wood & Perot vacated the foundry at 1126 Ridge Avenue it became the showroom of Haines, Jones, and Cadbury Co., a plumbing and heating company that is still in operation today. When the company moved out in 1931, the old foundry then sat vacant until 1937. Central Company Lumber Yard took over the property in 1940 and stayed at this location until the 1960s. The foundry sat vacant again until the 1990s when a proposal to convert the remaining buildings into a self storage facility emerged, but the project was never realized and the foundry was demolished. In 2002, a proposal to redevelop the lot for a fast food pad site was rejected by the Chinatown Neighborhood Association. Then, Posel Management Company proposed building a retail strip building facing Buttonwood Street and pave the rest of the lot for surface parking. Next up was a proposal to build phase two of the Lucky Garden Condominiums at 12th and Hamilton Streets, but plans fell through even before the fiscal crisis. Kim Ling, who operates accounting offices in Chinatown and South Philadelphia, purchased the lot in 2007 for $2,020,813. Attempts to reach Ling to discuss future plans for the site were not successful.