Decked Out on Pier 68

Pier 68 rises from the near dead. Divers spent weeks assessing and repairing damage to the substructure | Photo: Michael Bixler

The Delaware River Waterfront Corporation’s newest contribution to the river’s decaying, industrial shoreline is the resurrection of Pier 68. The once crumbling, overgrown fishing slab has been transformed into a meticulous swath of lush miniature groves and tidal landscaping atop a broad, wedge-patterned concrete deck. The park opens on Thursday, October 1st with an official ribbon cutting ceremony at 2PM. The redeveloped pier adds to the list of projects completed from the Master Plan for the Central Delaware, and it joins other first rate spaces Race Street Pier and Washington Avenue Pier as the southern anchor of the Central Delaware trail and greenway path that spans from Pier 70 to Penn Treaty Park. 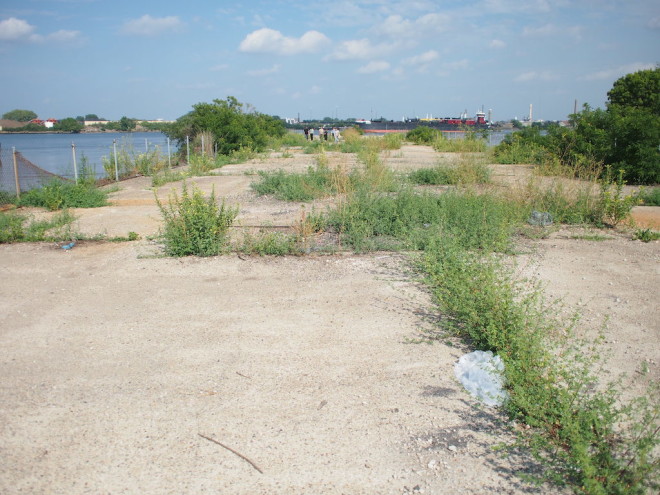 National Lands Trust, the owner of the property, has been working in partnership with the DRWC to acquire land along the Delaware River waterfront for multi-use trails and public recreation.

As you walk along the entrance deck of Pier 68, a small forest of willow, catalpa, and Kentucky coffee trees provide a verdant, visual barrier between the hectic, Walmart parking lot and the expanse of the angular fishing plaza. 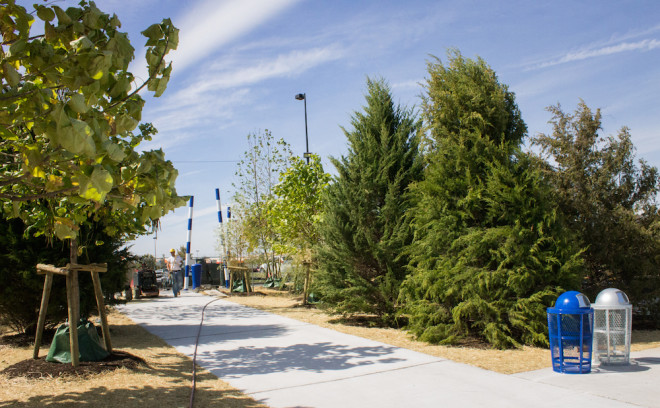 Not a Walmart in sight. The small grove of trees at the entrance deck will eventually fan out to obscure the shopping center and Pier 70 Boulevard | Photo: Michael Bixler

A four and a half foot deep aquatic cut in the center of the pier, inspired by Washington Avenue’s riparian conservation and the makeshift tidal grasslands at Spruce Street Harbor Park, stretches down through the original timber deck, allowing for a tidal pool to ebb and flow. A golden weeping willow rises from the wetlands centerpiece that is peppered with live stakes that will eventually fill in as a small, grassy marsh.

The picnic grove is filled with native trees that will provide a source for shade on the southern side of the uncovered pier. The small, grassy seating lawn extends from the grove toward the end of the pier. 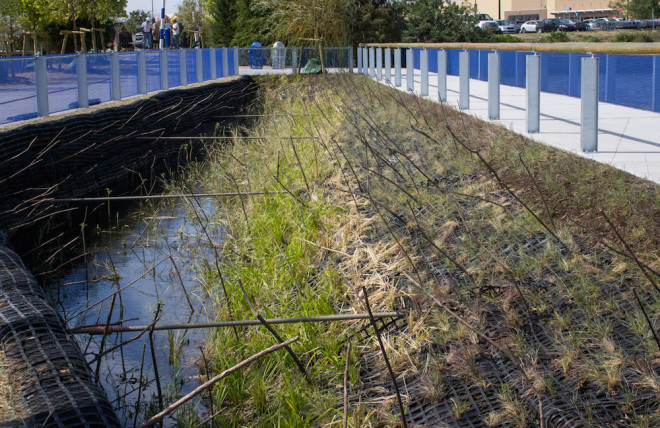 Spacious, nautical blue-and-white-striped chaise lounge chairs lay scattered about the pier’s sprawling deck. The chairs, built by 12 trainees of the Challenge Program, a Delaware outreach organization that provides carpentry and construction skills to at-risk youth, are constructed of cumaru wood and steel and resemble the slow, lolling waves of the Delaware River.

Granite seats covered in slatted wood fitted with bored fishing pole mounts line the end of the pier. A small opening in the pine railing at both the north and south facing sides provide ADA-compliant casting space. Like Washington Avenue Pier, old, rotting piles have been left in place to provide a fish habitat. 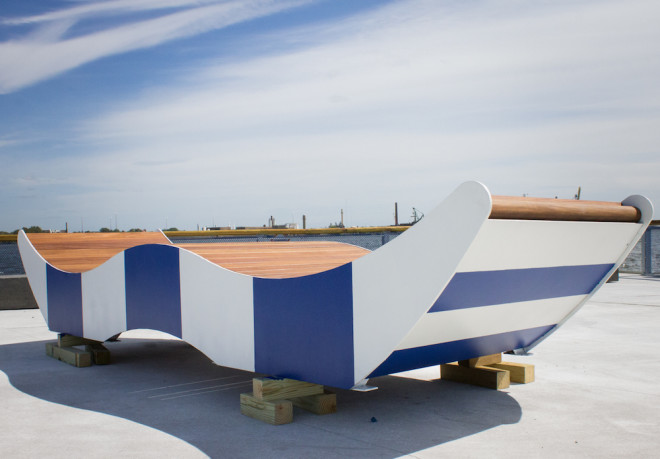 Engineering firm W.J. Castle, P.E. & Associates, P.C conducted the structural rehabilitation of the pier, repairing the sea wall, collapsing substructure, timbers piles and installing tie rods. The park’s $1.8 million cost was funded by support from the Pennsylvania Department of Conservation and Natural Resources, the William Penn Foundation, Community and Economic Development, the City of Philadelphia, Walmart, and a grant from Wells Fargo through the National Fish and Wildlife Foundation.

The DWRC is currently negotiating the purchase of a small lot behind Walmart from Tower Investments to extend Tasker Street and open up access to the trail system from Columbus Boulevard. Like Washington Avenue Pier, the park will be protected by security gates and open from dusk until dawn. Solar lighting will also be installed along the pier’s deck. Fishing license checks will gradually be enforced. 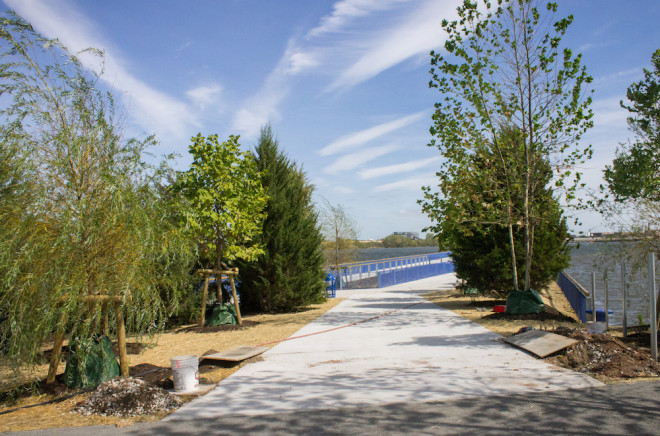 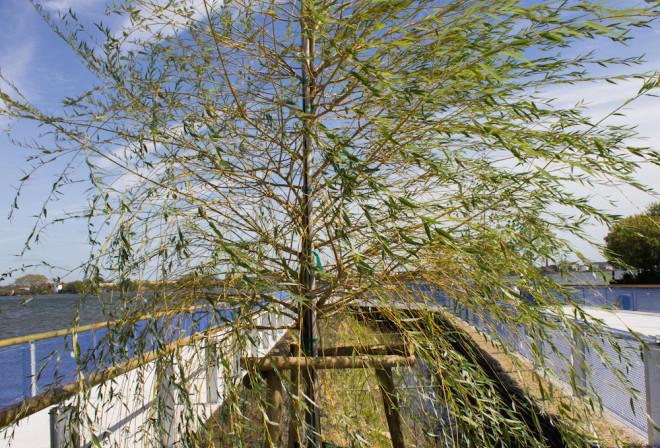 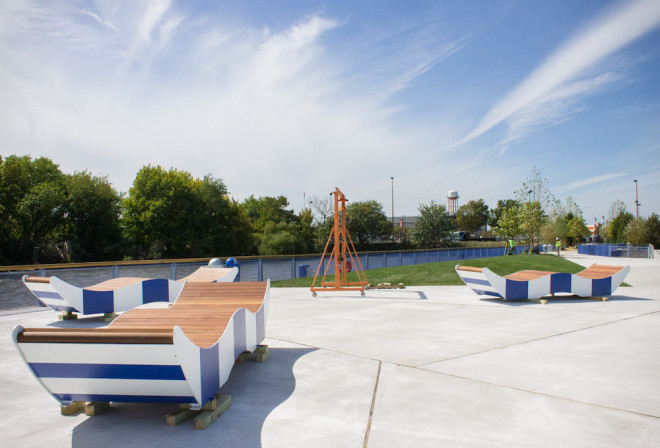 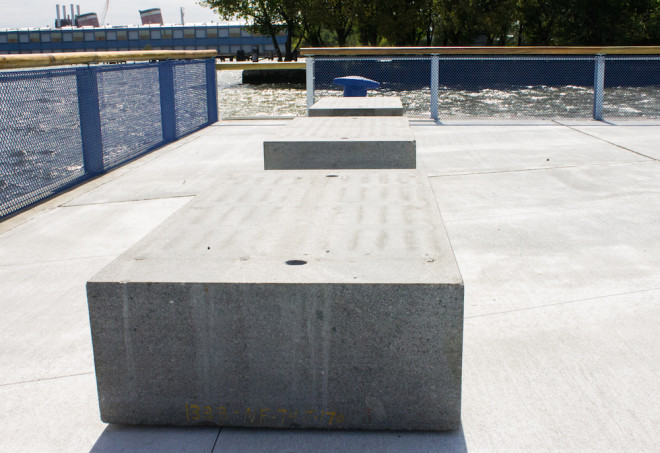 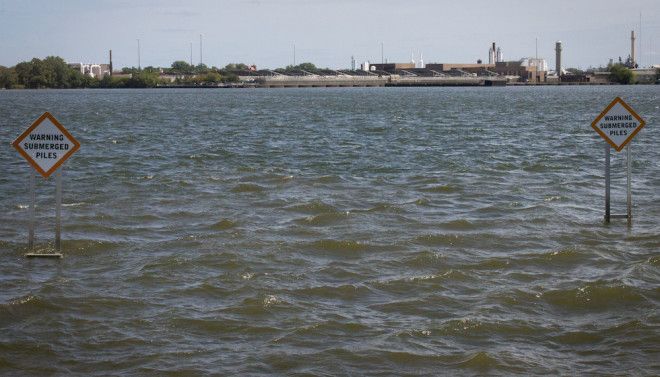