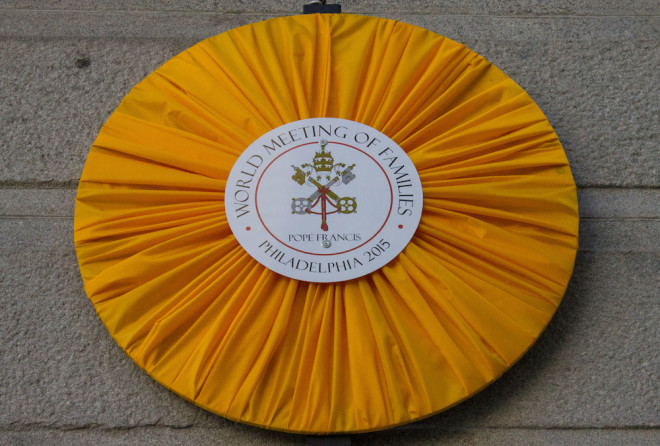 Over the next five days an estimated 1.5 million travelers will enter Philadelphia to take part in the World Meeting of Families and to see Pope Francis. We’re all quite aware that getting in and out of the city will be difficult; maneuvering the network of security perimeters once inside the various event zones will pose an even greater challenge. For locals, going about their daily routine from within and outside of the security boundaries–from South Street to Girard Avenue and 38th Street to the Delaware River–by car and train is a growing anxiety. These measures are much more stringent than those taken by the city in 1979, when Pope John Paul II came to Philadelphia. By comparing population and transportation data we will explore what has changed in 36 years and what to expect.

The extent of the security barrier being installed around Pope Francis’ public appearances is the most passionately discussed topic of this week’s papal visit. The boundary of the security perimeter constitutes much of Center City and it is divided into concentrically stricter zones where driving is not permitted, where cars are not allowed at all, public screening areas, and event perimeters only accessible to event pass holders.

Pope John Paul II’s visit brought 1.5 to 2 million people to the city and are the same numbers predicted for the Pope Francis events this weekend. Yet, in 1979 there was no division into outer and inner zones. Security perimeters included a relatively small number of closed streets, shown around the Parkway in the image below. 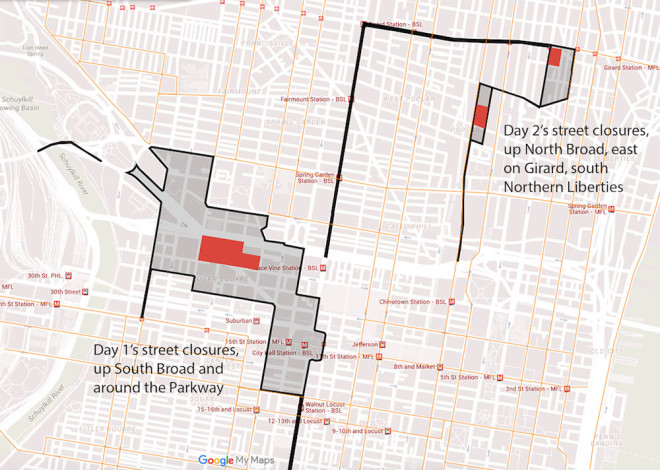 For comparison, here is what the security perimeter looks like for the Pope Francis visit. 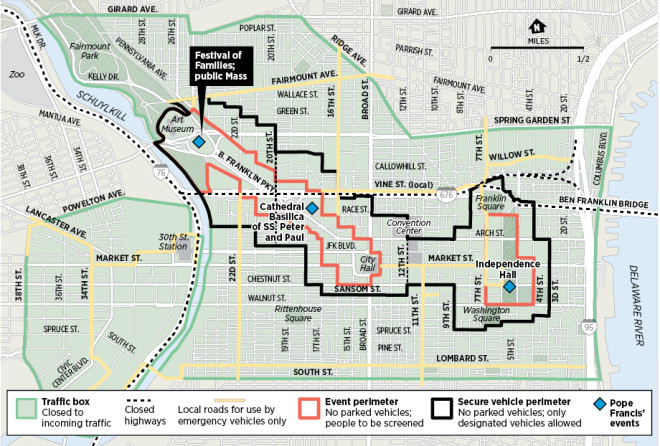 The stage erected on Logan Square, the most exclusive space during the October, 1979 event, was the only area closed off to the general public. It was reserved for ticket holders whose passes had varying colors dictating how close one could get to the Pope’s podium. The stage itself was the center of a lawsuit regarding the separation of church and state, due to Mayor Frank Rizzo’s promise to spare no expense on the City’s dime. The Archdiocese was eventually required to reimburse the City $150,000 for the costs of assembling the extravagantly festooned stage.

Police in Philadelphia did not detect any specific potential threats from people or vehicles so security was limited to select event areas. Center City contained fewer cars at the time and traffic restrictions were placed on only a few key places. However, since the assassination attempt in 1981 against John Paul II in St. Peter’s Square in Vatican City far greater measures have been taken to secure the leader of the Catholic Church. 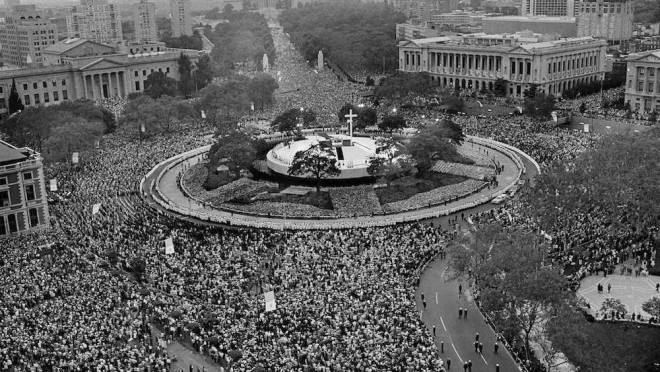 Philadelphia’s public transportation system has evolved quite a bit in the last 36 years. What we have today reflects the limitations of money, space, and public will, and reflects the economic and social evolution of the region. The measures that the city are putting into place for the Pope Francis visit maximizes SEPTA’s efficiency and carries slight, but noticeable differences from preparations for Pope John Paul II’s visit.

The following graphics shows the number of rail cars leaving the termini, per hour, for thress of the city’s main transportation systems–regional rail, subway/elevated rail (the Orange and Blue Lines), and the suburban trolley lines (the former Red Arrow Lines) during the Pope’s visit, in 1979 as well as what is planned for 2015. Two hundred riders on subway/elevated trains would indicate 40 five-car trains leaving Fern Rock, Pattison, 69th St, and Frankford in total per hour, or 10 trains leaving each station per hour. Regional Rail consists of between two and five cars, depending on the line and peak status. The suburban trolleys, represented by Route 100 (the Norristown High-Speed Line), Route 101 to Media, and 102 to Sharon Hill, vary between one car and two cars, depending on line and peak status.

The following information was gathered from historic timetables and SEPTA’s press releases, both including 1979 and 2015.

What the graphs reveal is that SEPTA’s car availability per line has changed somewhat since 1979, as the population, and train destinations, have shifted. Regional Rail availability throughout the day in 2015 is almost twice as high as it was in 1979, as the population and major job centers have moved further out, even as track miles have decreased. In 1979, Regional Rail was a disjointed system cobbled together from the former Pennsylvania and Reading Railroads and was beset by labor troubles, crumbling infrastructure, redundant service, and public apathy. The Regional Rail division’s ability to adapt has been impressive. The two legacy poles of SEPTA’s commuter service were joined together by the Center City Commuter Tunnel, allowing for service to pass briskly through Center City. Service to bustling suburban employment corridors has been enhanced and service to revitalized areas such as Temple University’s campus, Manayunk, and University City has been strengthened. Today, Regional Rail sees twice as much ridership as it did in 1979, a figure reflected in the planned ridership during the the papal visit.

The trolleys (Red Arrow Lines) have also been spared from what seemed like a doomed enterprise in 1979. At the time SEPTA was still using Brill trolleys built in the 1920s and 1930s, which were now approaching twice their service lifetime, and the older, pre-war boroughs served by the lines were increasingly abandoned in favor of newer, less transit-oriented suburbs further out in Delaware County. SEPTA strategically replaced the Brill trolleys one by one until the last was phased out in 1991. By doing this they also increased service frequency and transitioned the lines from an obsolete commuter rail system to one that resembled SEPTA’s inner-city trolleys. Today, the lines are well-integrated with other SEPTA services and are crucial to a much greater extent than in 1979 to the city’s contemporary reverse-commuting working class. The increased capacity of the lines will prove useful as twice as much ridership is expected during the papal visit than in 1979.

The city’s two subway lines, the Orange and Blue Lines, have long served as the backbone of the public transportation system. The advent of late-night service on both lines was widely hailed as a sign of Philadelphia’s vibrancy. The El, in particular, has seen a great deal of infrastructure improvement over the course of the last decade, most notably the reconstruction of the West Philadelphia elevated structure from a crumbling two-pillar structure to a more compact, single-pillar structure. However, despite these modern improvements and an overall population increase over the past three decades, Philadelphia’s two subway lines see less ridership today than in 1979. The largest factor is population shift in the neighborhoods along the Market-Frankford Line’s elevated path in West Philly, Kensington, and Frankford, and the Subway’s longest stretch through North Philly. All saw crippling resident and factory job losses in the decades between the two papal visits, to the extent that curtailing service was no longer met with strong opposition. Also playing a role may have been SEPTA’s lengthy and botched reconstruction of the Frankford portion of the El from 1988-2003, which caused issues with crumbling concrete years afterwards.

Another SEPTA decision that was made in reaction to changing demographics was the restoration of the route 15 trolley, brought back in 2005 for the first time since the 1990s. In 1979, however, Northern Liberties’ dissolution was prominently on display during Pope John Paul’s visit and his two stops in the neighborhood at the Shrine of St. John Neumann on 5th Street, and at the Ukrainian Catholic Cathedral of the Immaculate Conception on 7th Street. 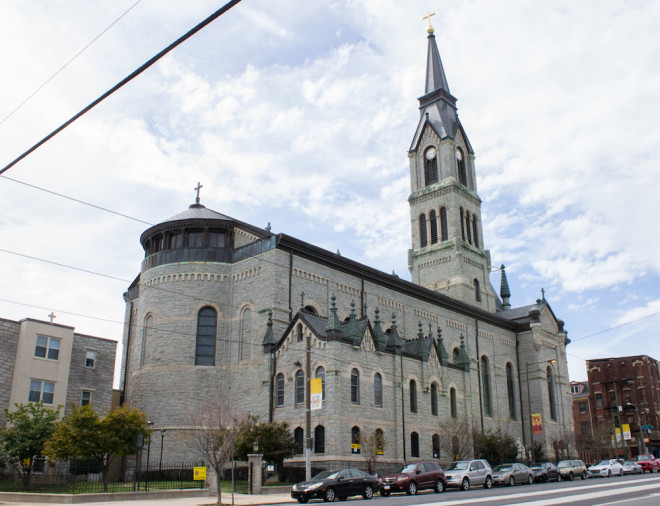 Pope John Paul II celebrated mass in basement sanctuary of the Shrine of St. John Neumann at 5th and Girard during his visit in 1979 | Photo: Michael Bixler

Considering the neighborhood’s reputation as a high crime area in 1979, the security cordons around the two sites in the neighborhood were quite large, especially given the relatively modest crowds. Police were out in force around Shrine of St. John Neumann and the surrounding area. The Fuerzas Armadas de Liberación Nacional, a high-profile Puerto Rican nationalist militant group that advocated independence for Puerto Rico, was suspected of planning an attack that would have delivered a big statement in what was then the heart of Philadelphia’s largest Puerto Rican community. Despite the strict security, the largely Hispanic crowd received Pope John Paul II warmly. His sermon, delivered in Spanish, was consistently punctuated by cheers of “Viva El Papa” from the crowd.

Pope John Paul II’s visit to the Immaculate Conception just a few blocks away was less strongly attended, with one parishioner suspecting a reluctance from his suburban peers to visit the most urban of the local Ukrainian Archeparchy’s churches. Like his visit at St. John Neumann, he addressed the crowd with a Ukrainian interpreter and received praise as he vowed to continue the struggle to revive the church in the Ukraine that was merged by force into Moscow’s state-controlled Orthodox hierarchy.

Scheduling Time for Patriots and Prisons

The other differences in the itineraries of these two papal visits can also be explained by changes in the city’s built environment. The original landscape design for Independence Mall, characterized by long rows of geometrically-arranged honey locust trees, proved to limit sight lines and movement, a fact on clear display at the Bicentennial three years earlier. It came as no surprise that Pope John Paul II’s itinerary skipped it; after a $300 million reconstruction of Independence Mall, Pope Francis will speak there on Saturday. Also absent from the last trip was a visit to any of the prison facilities in the Northeast. Holmesburg Prison in 1979 was vastly more difficult to secure than Curran-Fromhold Correctional Facility, its modern replacement that was built in 1995 and named after the warden and deputy warden who were killed at Holmesburg in a 1973 riot. 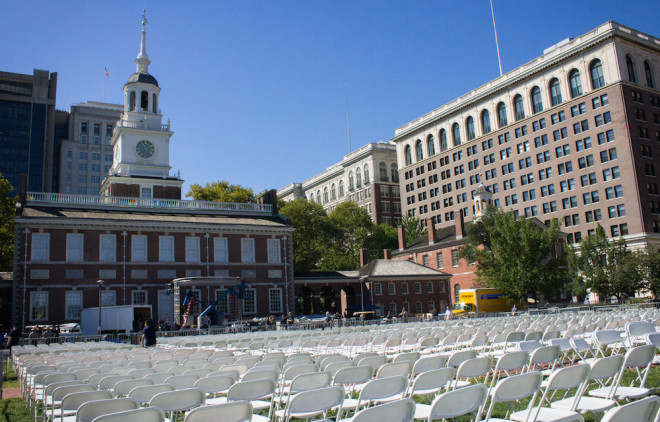 Folding chairs cover the lawn of Independence Mall in preparations for a policy speech given by Pope Francis on Saturday | Photo: Michael Bixler

The Pope Francis visit will be an occasion for the city to revel in its plentiful and prominent improvements. One could argue that this second visit, with its vastly enhanced security and, perhaps, overly meticulous planning will expose Pope Francis to less of the ‘authentic’ Philly than Pope John Paul II experienced. However, it is an opportunity to finally shed Philadelphia’s outdated reputation as a city strained by disfunction and show off its ever more beautiful and cosmopolitan downtown.