Bedding Down At The Hotel Carlyle

The Hotel Carlyle, in Francisville, is one of the city’s last boarding house hotels still in operation. The pair of old row houses at 1423 and 1425 Poplar Street were combined in the 1930s to form a hospital that predates the hotel. Both properties boast a diverse history of occupants that include a decorated Civil War colonel, enterprising doctors, famous jazz musicians, and neighborhood streetwalkers. 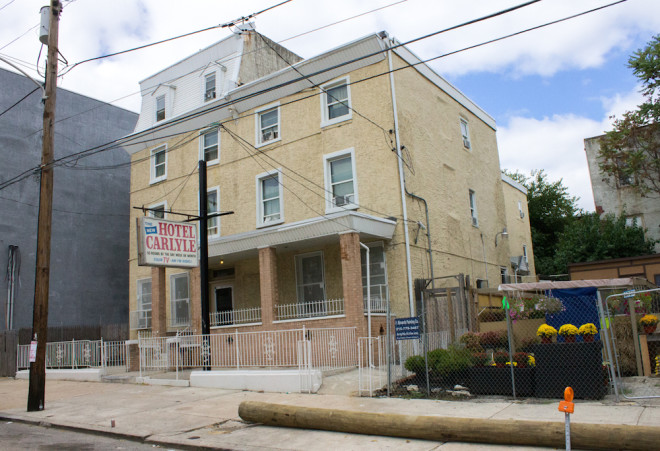 The Hotel Carlyle on Poplar Street is one of the city’s last boarding houses still in business | Photo: Michael Bixler

We don’t know exactly when the two former mansions were built. A property map from 1858 displays homes on the two lots, but the map does not confirm the two existing buildings’ dates of construction. The western half of the hotel, 1425 Poplar street, was once owned by oil and rail businessman William L. Elkins. 1423 Popular Street, the eastern half, was owned by the Erwin-Agnew Family. In 1884, Mary Agnew, a descendant of the family, commissioned architect John Deery to design a new house for the parcel, which is likely the building that sits on the lot today. Civil War hero Colonel Andrew George Wood, who drastically remodeled the house in 1895, was the last occupant of 1425 Poplar before it was combined with its next door neighbor.

Remedies and Rooms for Rent

Dr. Empson H. Bainbridge converted 1423 Poplar into the Bainbridge Private Hospital in 1907 after receiving his second medical degree at the Medico-Chirurgical College and Hospital, which merged with the University of Pennsylvania in 1916 to form the new Graduate School of Medicine. The successful Bainbridge Private Hospital expanded into 1425 Poplar after the death of former owner Colonel Wood in 1914. The medical facility featured 50 beds and its own nursing school with room, board, and laundry provided to students. The hospital stayed open for nearly a decade after Dr. Bainbridge’s death in 1924.

Dr. Bainbridge’s widow, Mary, had the combined buildings converted into a 38 unit rooming house after the hospital closed in 1935. It was sold to James and Anna Conner, who rented rooms there for the next decade. North Philadelphia bar owner, entrepreneur, and Greenwood, South Carolina native Roosevelt “Buddy” Peterson purchased the boarding house in 1946 and rebranded it the Hotel Carlyle. Peterson wanted to build on the success of his Chesterfield Hotel at Broad and Oxford Streets, famous for renting rooms to well known jazz performers who played at the Uptown Theater. 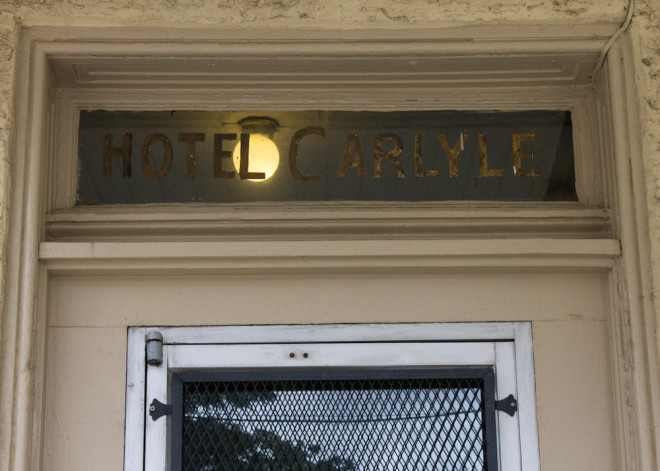 The success of the Watts Zanzibar Cafe at 1833 W. Columbia Avenue, one of the city’s first black-owned jazz clubs and now the location of Alliance for Progress Charter School, led Peterson to convert the restaurant of the Chesterfield into the Ebony Lounge in 1946, which quickly became a neighborhood social and cultural institution. (Peterson began a one story addition to fill the 15 foot setback of the Carlyle for a restaurant and bar similar to the successful Ebony Lounge. The project was never completed.)

Peterson transferred management of his hotels to his former son-in-law Ernest Harris in the 1950s while he worked on a plan to open a chain of hotels in Cuba. Harris owned both North Philadelphia hotels by 1958. The Chesterfield Hotel and Ebony Lounge burned down in 1973 and a Rite Aid was built on the lot.

The Renwick Family, Hotel Carlyle’s current owners, bought the building in 1960 and continued to use if for short-term lodging. By the mid-1980s the neighborhood attracted prostitutes and drug dealers. Both the Carlyle and the Harris House next door (still owned by Ernest Harris, previous owner of the Carlyle) were notorious for providing rooms to prostitutes and johns and gained a negative reputation for contributing to the neighborhood’s decline. In 1986, the Philadelphia Inquirer reported that the hotel offered rooms to couples for as little as $10 for a half-hour. 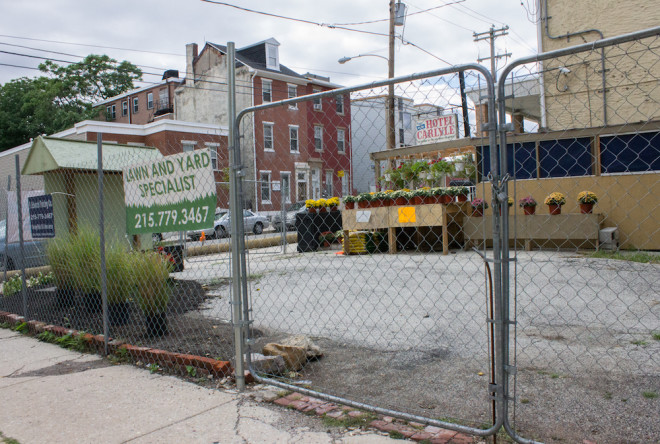 A large fire consumed the 1423 Poplar side of the hotel in May of 1985 and caused the fourth floor to collapse. The hotel reopened in early 1986 with a new coat of stucco. In 1987, Harris House Hotel burned to the ground. The lot is now used by a lawn care and small nursery business.

The Hotel Carlyle still rents rooms by the hour, night, week, or month. While Francisville undergoes a current burst of new real estate energy and redevelopment, the active boarding house stands as a reminder of a city in transition.