Bacteria And The Bellevue: The Birthplace Of Legionnaires’ Disease

On August 12th, the Philadelphia Department of Public Health issued a health advisory confirming 31 reports of Legionnaires’ disease and two fatalities among local residents, a fairly typical seasonal increase, according to the PDPH’s communications director, Jeff Moran. Although media attention this summer has focused on an outbreak of the disease at the Opera House Hotel and the Melrose Houses apartment complex in the Bronx, New York, that has killed 12 people so far, not to mention the outbreak at San Quentin prison in California where 95 inmates are currently under observation, Pennsylvania has the highest number of reported case counts across the country with 200 confirmed this year. The disease is named for the first identifiable U.S. epidemic of the disease, in 1976, when members of the American Legion fell ill after their Bicentennial convention at Broad Street’s elegant Bellevue Stratford Hotel. 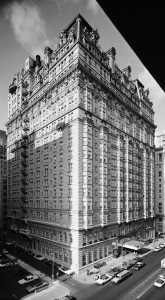 The Bellevue Stratford in November of 1976. The grand hotel closed that month due to numerous cancellations in the aftermath of the Legionnaire’s disease outbreak | Source: Library of Congress, Prints & Photographs Division

The summer of 1976 was hot and humid in Philadelphia, and luxury hotels like the Bellevue Stratford made sure their guests were comfortable by keeping the air conditioning running around the clock, which proved to be fatal for some. The outbreak of the legionella bacteria infected 182 people and killed 34 during the 58th annual convention of the Pennsylvania Department of the American Legion held on July 21-24th. A CDC field investigation later found the bacteria breeding in the hotel rooftop air conditioning system’s cooling tower.

“Because legionella is ubiquitous in the environment,” Moran explains, “it is difficult to prove that a specific environmental location was the source of infection.” Which is part of the reason why it is so remarkable that CDC investigators were able to inextricably link the Bellevue Stratford Hotel to not one, but two outbreaks of Legionnaires’ disease in the 1970s. No known connections between specific Philadelphia buildings or the bacteria have been found since.

After identifying the legionella bacteria in 1976, CDC researchers were able to retroactively diagnose previous mysterious outbreaks, including one that occurred just two years prior in September 1974 that was also traced back to the Bellevue Stratford. That outbreak infected a convention of the Independent Order of Odd Fellows and killed two attendees.

According to Dr. David Fraser, the head of the CDC investigation into the 1976 outbreak, “One of the things we found later when we could do blood tests on employees was that employees who had worked in the hotel back in ’74 were more likely to have antibodies to legionella than those who were more recent employees. So it looks as though, from time to time, there was exposure to legionella in that area. We don’t know that it was from the hotel itself, but we have pretty good evidence from the ’76 outbreak that the source of infection was in the hotel.” 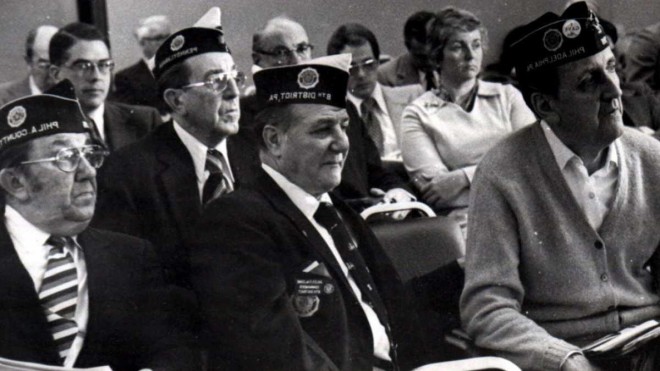 The historic hotel, nicknamed the “Grande Dame of Broad Street,” opened in 1904 with extravagant amenities, including two orchestras, three ballrooms, both Turkish and Swedish baths, an outdoor rose garden on the roof, and rooms decorated in colonial, French, Italian, and Greek styles. G. W. & W. D. Hewitt, the local architectural firm with an impressive list of previous projects that include the Philadelphia Bourse and a roster of renowned former partners like Frank Furness, designed the building.

After the outbreak the luxury hotel received one cancellation after another, until it was forced to close and fire 500 employees in November of 1976. The last event hosted by the Bellevue Stratford before its closure was the 48th Annual Conference of the Society of American Magicians.

Any structural changes made to the Bellevue Stratford after 1976–since 1996 the Hyatt at The Bellevue (the name was shortened from Park Hyatt Philadelphia at the Bellevue in 2010)–are more closely linked with reduced occupancy than medical precaution. “There wasn’t a need for a structural change at the Bellevue Stratford Hotel, as I recall,” says Fraser regarding CDC recommendations for physical changes made to the hotel. “There was a likely value in keeping the bacterial growth in the cooling towers under control. Clean the towers and treat them regularly.” 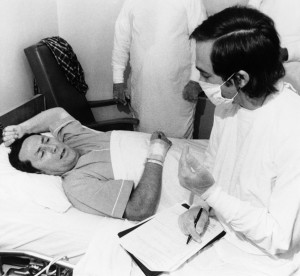 Because of lingering bad press and a declining market for luxury hotels on this scale, the Bellevue could not sustain its grand accommodations. A renovation in 1980 reduced the number of guest rooms from 1,000 to 545, and a second renovation in 1989 further reduced the number of rooms to 165. Hotel space is now confined to floors 12-19, and the rest of the building has been converted into offices, retail, and a food court. The Sporting Club, a 93,000 square foot exercise facility, was added to the hotel’s parking garage (built in 1983 on the lot where The Philadelphia Art Club once stood). A lobbying firm and a communications group now occupy the 8th floor, which once housed a spacious suite for hotel managing director William Chadwick and his family. The roof in its heyday had restaurants and gardens. It is no longer accessible to the public.

The Hyatt at the Bellevue’s website boasts visits from every U.S. president after Theodore Roosevelt and innumerable celebrity guests. It also proudly lists the few outstanding original fixtures that survived the hotel’s numerous renovations, like light fixtures designed by Thomas Edison and Tiffany stained glass. No mention of either of the two outbreaks of Legionnaires’ disease is made. Text on the hotel’s timeline quietly reports that “in 1976, the property was put up for sale and advertised around the world.”

Outbreaks of legionella continue to increase across the country, though no alarms are going off in Philadelphia. According to the Philadelphia Department of Public Health’s advisory, the summer increase in Philadelphia County is not unusual and the cases–predominately male with a median age of 62–have not been concentrated to one location in the city. Unlike the outbreak in the Bronx, where the disease can be traced back to a specific building and its cooling tower, the cases in Philadelphia “have no epidemiological association with one another”. The PDPH notes that the increase of infection is consistent with historic trends and that an upsurge in cases of legionella during summer months are common due to heat, rainfall, and humidity, which provides ideal breeding conditions for the bacteria.