Salvation For A Neighborhood Icon In Manayunk 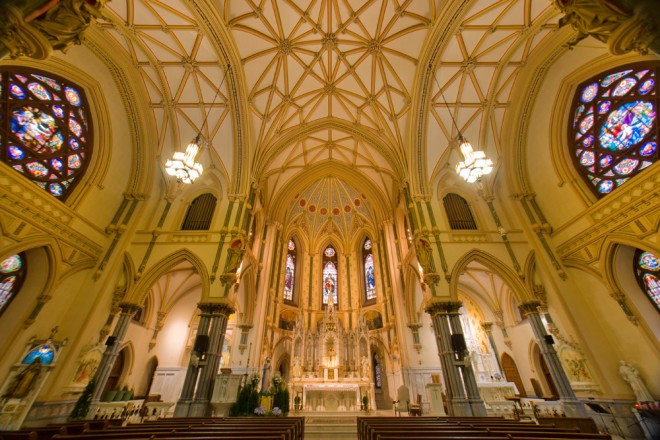 Editor’s Note: This piece was produced in collaboration between PlanPhilly and Hidden City, with text by Ashley Hahn and photos by Bradley Maule. A version was published in the second issue of Extant, a new publication by the Preservation Alliance for Greater Philadelphia.

Father Kevin Lawrence can tell you exactly where he was in the evening of April 29, 2014: sitting at the counter at Dalessandro’s on Henry Avenue in Roxborough, having ordered his favorite, a pizza steak with fried onions and banana peppers, taking in neighborhood chatter.

The talk was all about the fate of St. John the Baptist Church in Manayunk, where a meeting was scheduled that night to talk about structural issues found at the monumental Catholic church. Some feared the Archdiocese of Philadelphia, in the midst of continuing downsizing, would announce its closure; others argued it was time to tear the old beauty down. Father Lawrence, then a Catholic priest at St. Malachy in North Philadelphia, recalls thinking, Thank God I’m not at St John the Baptist. From his mind to God’s ears. A little more than a month after that evening at Dalessandro’s, Lawrence accepted a transfer to St. John’s, tasked with the challenge of knitting together freshly merged parishes and stewarding a massive restoration of the church itself. 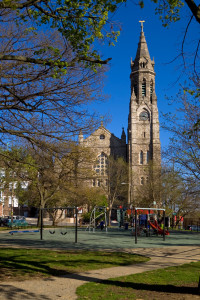 Looking from one neighborhood icon (Pretzel Park) toward another (St. John the Baptist) | Photo: Bradley Maule

St. John the Baptist dates to 1894, when it was designed by renowned ecclesiastical architect Patrick Keely. The church’s rugged clock tower punctuates the neighborhood’s steep skyline and inside, it is a richly appointed polychromatic beauty of carved stone and stained glass. Yet despite St. John’s high style, architectural pedigree and deep community roots, the church is not listed on the Philadelphia Register of Historic Places. Indeed, very few Catholic churches are on the list, thanks in part to the Archdiocese’s resistance to designation.

When a wave of parish closures hit Manayunk in 2012, two of the neighborhood’s parishes—St. Josaphat (1898) and St Mary of the Assumption (1849)—were consolidated into St. John’s. Just a year after this merger, a façade inspection of St. John’s by engineering firm O’Donnell & Naccarato identified areas in critical need of repair. Parishioners were on high alert.

At the April 29 meeting, architect Nan Gutterman, of Vitetta, and engineer Robert MacIntosh, of MacIntosh Engineering, presented the challenges resulting from a subsequent conditions study: areas of masonry, particularly on the steep bell tower and the buttresses on the sanctuary transept, were displaced and in urgent need of repair. Work on the church alone could cost millions of dollars. In response, the regional bishop and Father Thomas Kletzel, St. John’s priest at the time, assembled a task force of parishioners, diocesan officials, and a facilitator to evaluate whether to stay at St. John’s, or to move into one of the churches recently merged into the parish, both of which demanded far less expensive upkeep and offered easier parking.

A Leap of Faith 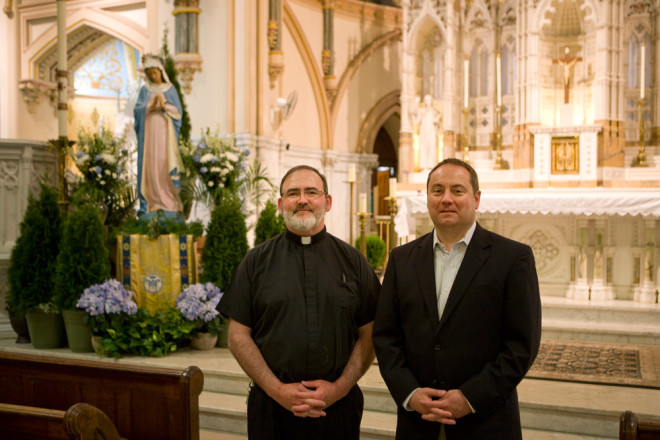 After Father Lawrence came to St. John’s in July, the task force, (which had met twice before Father Lawrence arrived), voted overwhelmingly to stay at St. John the Baptist and undertake its restoration. Last August, Father Lawrence announced that decision to the parish. It now became Father Lawrence’s responsibility to lead a congregation of modest size through a complex and expensive project. But more than that, it meant saving a beloved neighborhood icon.

To Lawrence, partial deconstruction did not feel like a viable option for the parish or the broader community. “That’s like saying if you have a Cezanne that’s costing you an arm and a leg to insure, why don’t you just get rid of it?” Lawrence said. “I think this is one of those structural pieces of art that’s important for at least the landscape of this community.”

With the decision to stay at St. John’s, the parish also started developing a pastoral plan in the hopes of stabilizing and strengthening both the building alongside the recently united parishes.

“I use the building as a metaphor,” Lawrence explained. “It’s a beautiful, old building. It can lift our minds and hearts to God very easily, but it’s broken and in need of repair. These communities that have come together, they are old communities. St. John’s is 1831. St Mary’s is 1849. I think St Josaphat’s is 1890s. In and of themselves there’s a beauty in this community, but there’s brokenness. It needs, I like this word, remediation.” He found the last word reaching for a set of engineering drawings on the rectory’s dining table. 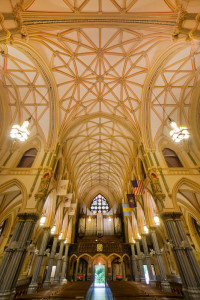 No shortage of ornamentation inside the sanctuary | Photo: Bradley Maule

The challenge facing St. John’s is to catalyze a far-reaching community response to restore the church, and through the project strengthen the parish itself. Father Lawrence and a newly formed friends group must motivate community members to raise funds, maintain support from Archdiocese officials for their plans, and manage a team of building professionals to prioritize repairs. This is the real work of preservation, aided in this case by a confluence of factors: the availability of expertise within the parish community and its extended network, the iconic nature of church architecture, and the good fortune that the building was still structurally sound.

As work has begun in 2015, the initial cost appears to be lower than expected, bringing the total estimate for near-term church repairs down from $3.6 million to closer to $1.7 million. Investigation of the compromised buttresses revealed total reconstruction was not necessary because the stone wall behind the masonry cladding was so strong. Instead, the church and its consultants opted to stabilize the failing sections of masonry cladding with metal rods and mortar, repairing flashing to break the damaging freeze-thaw cycle, and repointing the mortar joints.

The lower estimate of the project’s cost is thanks in part to retired contractors, such as Tony Canuso, volunteering their services as construction managers. Canuso, who founded Neshaminy Constructors, helped “find people with the same passion we have” to work on the church at a fair price. This professional-parish collaboration—along with the strategic repair work–helped bring a six-figure buttress repair down to the $50,000 range.  The hope is to do the same thing for repairing the bell tower. The plan is to tie its stone cladding back to the interior stone structure using Helifix anchors and repoint any areas of visible cracking.

Father Lawrence said he presented the parish’s reasons for staying at St. John the Baptist to the Archdiocese, and explained how they intended to pay for repairs. So far, the Archdiocese has been supportive.

“If a parish is able to care for multiple church buildings and maintain fiscal stability without jeopardizing ministerial outreach or continued presence in the community then it is encouraged to do so,” said the Archdiocese’s communications director Ken Gavin in an emailed statement.

Off to a Promising Start 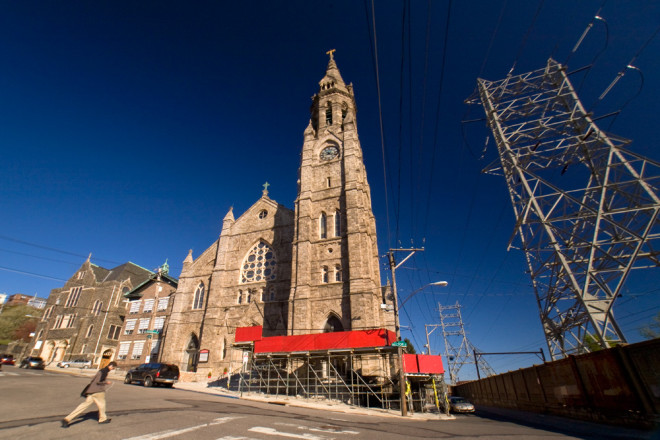 Scaffolding has been erected to protect pedestrians from falling masonry | Photo: Bradley Maule

The Archdiocese is able to offer technical assistance for major projects, but not direct financial support. So to fund the projects ahead, the Friends of St. John the Baptist are launching a major capital campaign. “St. John’s has always been a vibrant, active parish in this really tight-knit community,” said Rich Van Fossen, who co-chairs the Friends. He hopes those ties will help galvanize fundraising to support the critical repairs and more.

“I was baptized here, confirmed here, went to school here, got married here,” one parishioner told me on her way into the steep St. John’s churchyard, pink carnations in hand for her mother-in-law’s grave. Generations of Manayunk residents have stories like hers. There are also scores of living St. John’s school alumni, as well those who were connected to St. John’s once powerhouse Catholic Youth Organization. The Friends of St. John the Baptist hope that St. John’s wide network will work in their favor.

So far informal fundraising efforts have yielded $250,000 in cash, $100,000 more in pledges, and several other potential major gifts are possible, said Van Fossen, a parishioner whose background is in fundraising and development. Beyond these and parish contributions, the repair project may also to draw from a trust reserved for capital improvements, the result of earlier parish mergers.

“The building is a big draw,” said Van Fossen. So the Friends hope that Keely fans, building buffs, or philanthropists with an interest in history could also be moved to support the capital campaign.

“In the end we will be saved by beauty,” said Lawrence borrowing from Fyodor Dostoyevsky. “You take the beauty of the building with the beauty of the faith and the community. Those things can easily coalesce. I really think there’s a great potential here.” 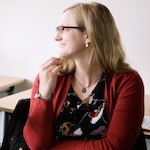