Forgotten And Alone: Bring Old Baldy And the General Into Town 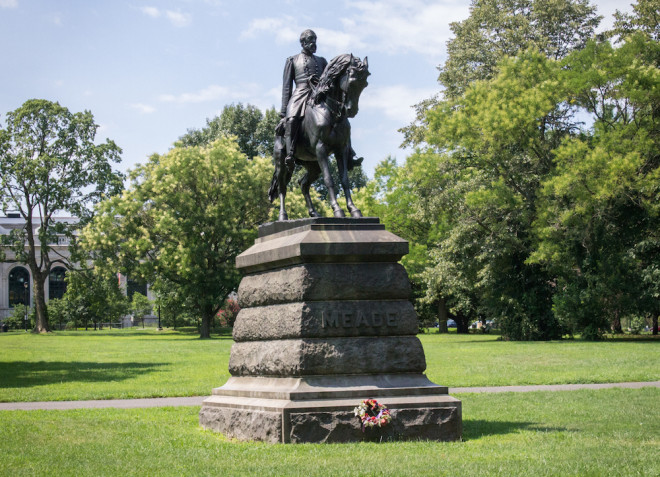 The Meade memorial sits all by its lonesome on the wide, vacant lawn behind the Please Touch Museum | Photo: Michael Bixler

On quiet Lansdowne Drive in West Fairmount Park behind the Please Touch Museum at Memorial Hall stands the lone equestrian statue of decorated Civil War general George Meade. It was sculpted by Alexander Milne Calder–the same artist who was commissioned by architect John McArthur, Jr. for 250 architectural sculptures at City Hall–and installed in 1887. The life-sized bronze statue depicts the Union general on his stalwart horse, Old Baldy, heading into battle. Meade’s gaze is fixed on a wild grove of trees towards Laurel Hill Cemetery across the Schuylkill River where he is buried. The general, who defeated Robert E. Lee at Gettysburg (and therefore protected Philadelphia from attack) was held in high regard in the years following his death, but most of modern day Philadelphia has forgotten about him. The obscure location of this sculpture doesn’t help.

The city is filled with equestrian monuments. The statues of Major General John Fulton Reynolds and General George B. McClellan on the north plaza of City Hall and the Washington Monument at Eakins Oval–one of the largest equestrian works in the world–all seem to have their place inside the city’s public spaces. Meade and Baldy, however, stand ignored and alone. The statue was originally placed in a heavily traveled, landscaped section of Fairmount Park. Today that part of the park is far off the beaten trail. In addition to being neglected, the work is occasionally vandalized.

There is a movement underway to have the Meade statue placed in a more conspicuous location. The Equestrian Relocation Committee of the Old Baldy Civil War Round Table of Philadelphia wants to move the statue out of the isolation of West Fairmount Park and into a more visible place along the Benjamin Franklin Parkway.

Efforts to relocate the memorial have continued for over a century. The Grand Army of the Republic made an attempt to have it moved in 1913, asserting that the work was not set in a place conducive for public viewing. 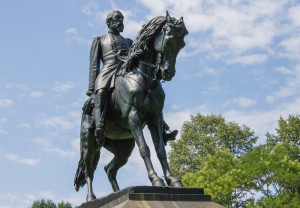 Meade and his trusty steed were cast from the bronze of 30 old cannons donated by the federal government | Photo: Michael Bixler

Relocating large commemorative sculptures is fairly common in Philadelphia. Numerous statues and monuments have been shuffled all around the city for one reason or another. The George Washington statue at Conversation Hall was originally at Independence Hall. The base of the Washington Grays’ Monument in front of the Union League was placed at Broad and Girard in 1872. It was then moved the center of Washington Square and the statue was added. It was relocated again in 1954 to Lemon Hill in East Fairmount Park where it stayed until 1991 when the Union League saved it from neglect. The Abraham Lincoln Monument at Kelly and Lemon Hill Drives was once in the middle of the intersection. The Joan of Arc statue near the Art Museum came to Philadelphia from a corner of an intersection in Paris. The Fairmount Park Art Association purchased it in 1890 and installed it at the east end of the Girard Avenue Bridge. It was moved to its present location on Kelly Drive near 25th Street in 1948. The Matthias W. Baldwin statue at City Hall was first installed at the eastern side of the intersection of Broad Street and Spring Garden Avenue, not far from the sprawling Baldwin factory.

The All Wars Memorial to Colored Soldiers and Sailors in Logan Circle is another case. When the Commonwealth of Pennsylvania commissioned the memorial in 1927 to recognize the patriotism of African-American servicemen, the intent was to place it along the Benjamin Franklin Parkway. Racism halted those plans. It was instead put in a distant corner of Fairmount Park where it sat for 60 years until being moved to its current location across from The Franklin Institute in 1994.

Most of these changes have helped keep historic, public artworks relevant and visible. The relocations show a respect for the past and to the history of the city. They affirm that, while traffic patterns and other forms of human activity change the way public space is accessed and used, individual memorials placed inside that landscape by our forefathers still matter. Moving the Meade statue to Center City, where his descendants say they would like to see it, should naturally follow. This would be an appropriate, overdue gesture to honor his legacy. 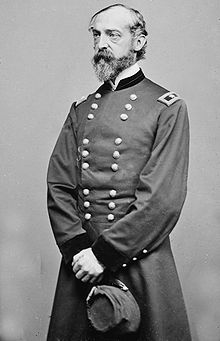 General George Gordon Meade was born in 1815 in Cádiz, Spain. He was the eighth child of wealthy Philadelphian merchant Richard Worsam Meade and Margaret Coats Butler. Meade was a civil engineer and an officer in the United States Army who fought with distinction in the Second Seminole War and the Mexican-American War. He served as a Union general during the Civil War and commanded the Army of the Potomac, from which he earned the nickname “Old Snapping Turtle.”

Meade is best known for leading the Union Army victory at Gettysburg in 1863. He was appointed to command the Army of the Potomac just three days before the battle, but was able to organize his forces to fight the successful defensive against Lee. Meade continued to command the Army of the Potomac through the Overland Campaign, the Richmond-Petersburg Campaign, and the Appomattox Campaign, but was overshadowed by the direct supervision of Ulysses S. Grant who accompanied him throughout these operations.

Meade became a Fairmount Park Commissioner after the Civil War. He was chiefly responsible for the park’s pleasurable arrangement of drives, walks, and bridle paths. The former general was often seen rambling throughout Fairmount Park, sometimes on Old Baldy, talking to park goers and surveying the landscape’s various geographical details. He would later apply his engineering skills to blending various landscapes together into a cohesive whole.

The City of Philadelphia gave Meade’s wife a house at 1836 Delancey Place, where the general lived until his death in 1872 from complications of old battle wounds and pneumonia. He was only 56 years old. Meade’s home still stands and is now used as apartments.

The Philadelphia general has many national accolades and commemorations, including a highly visible statue in Gettysburg. The U.S. Army’s Fort George G. Meade in Maryland pays tribute to the military leader. The Old Baldy Civil War Round Table in Philadelphia is named in honor of Meade’s devoted horse, who died in 1882, outliving the general by 10 years. Like Meade, Old Baldy had been wounded in battle several times.

The commissioning of the sculpture was the first major undertaking of the Fairmount Park Art Association–now the Association for Public Art. The Pennsylvania legislature allocated $5,000 for the granite pedestal and the federal government donated 30 old bronze cannons to melt and cast the large statue, yet during the Panic of 1873, the Art Association struggled to finance the project. It was hard to compete with financing obligations for the 1876 Centennial International Exposition. But finally, the 119 women of the Meade Memorial Women’s Auxiliary Committee of Philadelphia secured an additional $30,000 to erect the memorial. 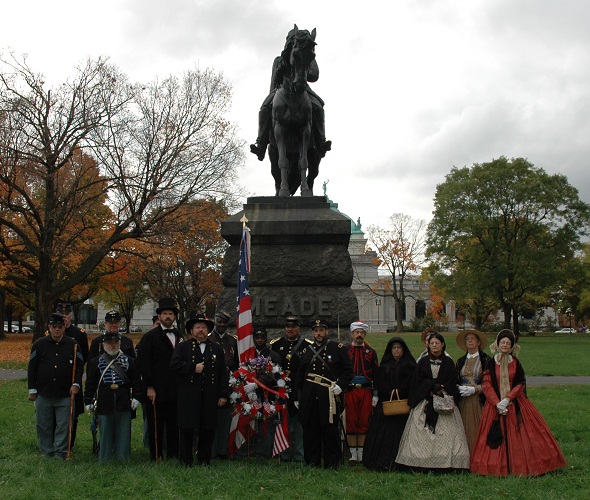 Living historians of the General Meade Society of Philadelphia pose in front of Alexander Calder’s statue on October 27, 2012. They gathered to commemorate the 125th anniversary of the statue’s unveiling | Photo: Tom Huntington, Searching4Meade.com

The statue went up fifteen years after Meade’s death, in front of several thousand people and many Civil War veterans, on October 18th, 1887. After the dedication, the Fairmount Park Art Association held a gala at the Union League with six hundred guests including General Meade’s West Point classmates, a number of his personal staff and aids, and many who had served under him when he commanded the Army of the Potomac.

The General Meade Society of Philadelphia gathers annually at Laurel Hill Cemetery on December 31st to celebrate the anniversary of the general’s birth. The Society sponsors tours of Meade-related sites in Philadelphia and holds seminars on Meade’s life. Members run a scholarship drive for the General George G. Meade School in North Philadelphia and have undertaken a project to issue a commemorative postage stamp featuring the general.

In 2013, a conservation team from the Association for Public Art completed a special restoration treatment that included surface cleaning and a protective wax coating. Refabricated elements, including the reins for Old Baldy, were added. The restoration was funded by an anonymous donor in honor of the 150th anniversary of the Battle of Gettysburg.