In 1994, Edmund Bacon, legendary Modernist Philadelphia city planner, commissioned a brilliant orientation device in the City Hall courtyard in honor of Penn’s 350th birthday. The compass was painted to mark the geographical center of William Penn’s original Philadelphia city plan. He installed a mirrored ball hanging over the large hand painted compass that allowed one to simultaneously see all four entry portals to the courtyard aligning with city streets bound north, south, east and west. The sensation was that of being instantly anchored inside the city grid. You knew exactly where you stood.

However, the alignment of the compass contained a little white lie. 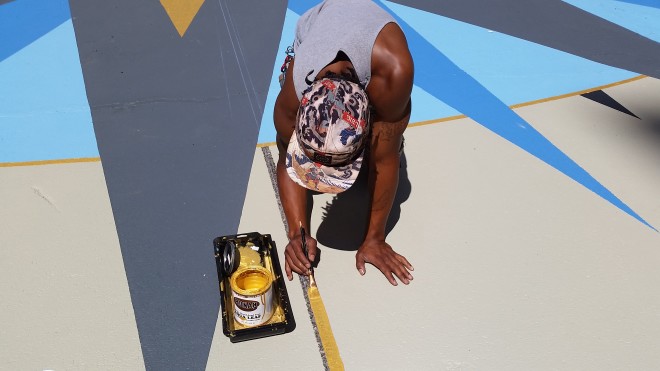 We commonly describe the city’s grid in terms of true compass points north, south, east, and west, but it isn’t exactly so. The city is slightly off axis due to cartographic anomalies that stretch back to Penn’s visionary 17th century system of surveying and planning. Earlier this month the Mural Arts Program restored the painted compass in the courtyard of City Hall, and corrected Bacon’s lie.

We spoke to Frank Morelli, engineer and Survey Bureau manager of the Philadelphia Streets Department, who explains how the city was built just a tad left of true north.

Joe Brin: Was the city grid established by William Penn based on accurate compass readings?
Frank Morelli: No, early surveys were based on astronomical observations. It is my understanding that William Penn never intended Broad Street to run true north. His intention was to run Market Street the shortest distance between the Schuylkill and Delaware Rivers as depicted in Thomas Holme’s 1682 map, A Portraiture of the City of Philadelphia.

Many people refer to the map as the city’s first survey and plan. However, it was published prior to extensive surveying. The original map ignored several important topographical features, like the marshes along the Schuylkill River, which required the original Schuylkill Front Street (now 22nd Street) to be shifted approximately 800 feet eastward. This also caused the other revisions, like the shifting of Broad Street to the west along with the relocation of Center Square (City Hall), Rittenhouse, and Logan Squares.

The topography and marshes did not alter William Penn’s original concept for the primary street grid. Early plans show that by 1685 all the adjustments had been made and that all the streets had been surveyed and laid out to their current configuration. 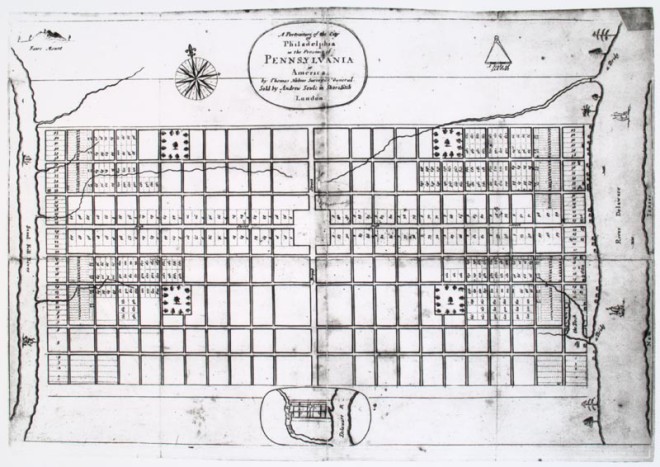 Origins of a city grid. A Portraiture of the City of Philadelphia is regarded as the first map of the city | Source: Public Domain

JB: So, Philadelphia’s street grid, and an incorrect brass compass now believed to be covered in asphalt where the current compass is in City Hall’s courtyard, is off by how many degrees?
FM: The original surveys of Philadelphia are “off” from true north, although they probably represent the best accuracy that could be obtained with the available equipment at the time. The bearings listed from the old surveys are still what are held as the recorded bearings.

The record bearing for Broad Street coming from City Hall is north 11° 21’ east. Survey work from 1894 determined the astronomical bearing for this section of Broad Street to be north 9°31’23.7” east. This represents a difference of 1°49’36.3”, with city datum being to the left of astronomical or true north.

You should also know that grid north from the State Plane Coordinate system, which is what most GIS systems and GPS surveying equipment are based on, is not the same as true north. Due to the fact that longitudinal lines (due north lines) are not parallel, but converge as they approach the North Pole, there is what is called a convergence angle, which represents the difference between grid north and true north. At the center of Philadelphia (City Hall) this angle is approximately 1°41’06”, with true north being to the left of grid north.

JB: What role does all this play in property rights disputes or any other modern day, civic concerns?
FM: All subdivision bearings are based on the official city plan. Every plan relocating lot lines are reviewed by the Survey Bureau prior to recording to make certain alternate sources of bearings are not being introduced into the system. 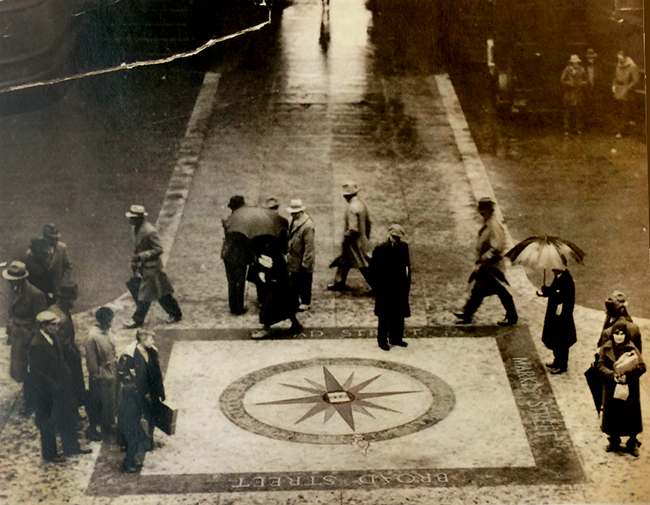 JB: Does the Survey Bureau always make note of this in its legal documents?
FM: No, since all bearings used for title purposes are always city plan bearings. If we prepare a topographical survey or a plan for construction purposes it is important to state the source of bearings. All drawings have to bear our stamp. The earliest legislation providing for controlled surveying in the City of Philadelphia was the Act of 1710, passed by the Colonial Assembly over 300 years ago. This Act and several subsequent Acts created the position of Surveyors and Regulators and provided them with the power to regulate party walls, building foundations and partition fences in the city of Philadelphia. Problems like land subdivisions not mathematically surveyed and connected with the confirmed city plan–property line disputes, street locations and land title litigation–are virtually nonexistent.