Before The Pope, The Days Of The Revivalists

Pope Francis fever is spreading as the city braces for the World Meeting of Families 2015 weekend in late September when millions of visitors will flood the city. Philadelphia is no stranger to holding religious extravaganza. 158 years ago, the Protestant revival movement, hosted largely inside the Union Tabernacle, one of the country’s first traveling ministry tents, spun the city into a spiritual whirlwind for over four months. 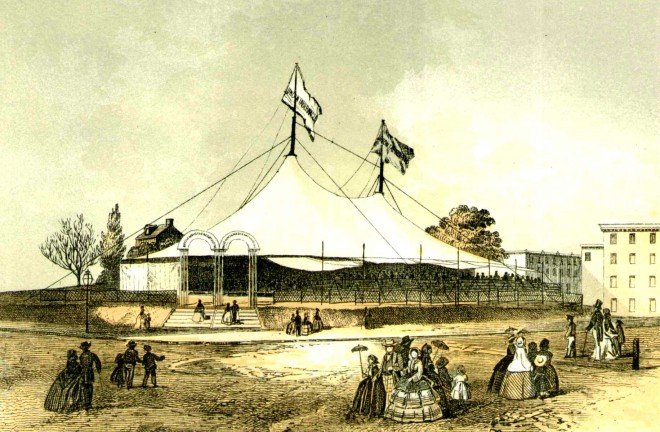 The popular use of large-scale tents for ministry events began with the Union Tabernacle in the mid-1800s | Source: The Union Tabernacle; or Moveable Tent-Church: Showing in Its Rise and Success a New Department of Christian Enterprise (1859).

The Revival of 1858 marked the beginning of the Third Great Awakening period of religious activism in American history. It became a national evangelistic movement that spread faith to the non-religious population. The movement began in upstate New York in 1857 and soon found its way to Philadelphia. Before winding down during the Civil War years, the Revival’s success was greatly aided by the Philadelphia chapter of the Young Men’s Christian Association, whose members traveled throughout the city spreading the word of God.

The YMCA sent men to preach on street corners, at wharves, at firehouses, and wherever else they could gather an audience. The organization distributed religious tracts and soliciting people who did not regularly attend church services. YMCA members specifically targeted young men who had moved to Philadelphia from rural areas. The newcomers were asked to join the YMCA to learn temperance, moderation, and perseverance.

The YMCA soon began to sponsor prayer meetings and other religious gatherings during the week. The first noonday gathering was held in the lecture hall of the Methodist Episcopal Union Church–the site of  Wyndham Hotel at Fourth and Arch Streets–on Monday, November 23, 1857. The service was sponsored by wealthy businessman George Stuart who helped establish the Philadelphia YMCA in 1854.

Several dozen people attended the meetings in the first few weeks. A few months later, organizers selected Jayne’s Hall, an office building at 625-631 Chestnut Street that had recently been built for patent medicine maker Dr. David Jayne, to be the permanent revivalist gathering place, due to its central location. Meetings were first held in the front anteroom on February 3, 1858. The services were primarily aimed at those who would not normally enter a church building and German immigrant Roman Catholics.

The revival movement took off at Jayne’s Hall. Within weeks, attendance swelled to thousands and the entire building was put into use for daily YMCA-sponsored prayer meetings. The building was originally arranged to receive 3,000 people, but it was soon reconfigured to accommodate as many as 6,000.

Although ministers were always in attendance, laymen conducted evangelical prayer sessions, consisting of hymns, prayers, and the reading of Scripture. Comments were solicited from the crowd, but they were not to exceed three minutes or a bell would sound. No donations were sought at these meetings, nor were any participants requested to join any particular church.

Have God, Will Travel 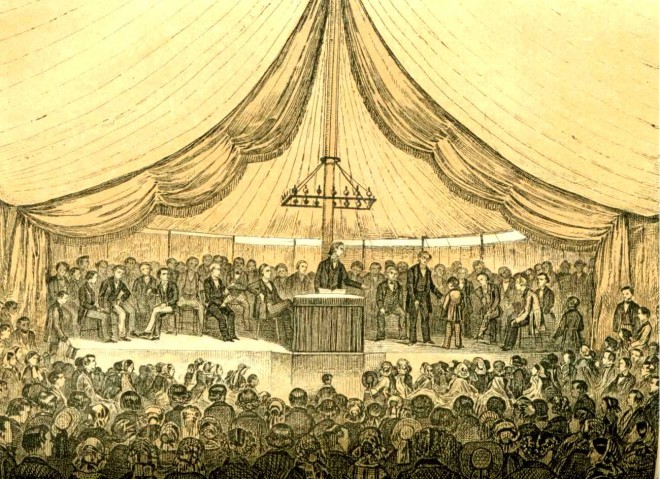 The Union Tabernacle had hosted between 150,000 to 170,000 people inside its tent. The last meeting in Philadelphia took place at Broad and Girard Avenue in 1858 | Source: The Children of the Tent; Or, the Work of God Among the Young, At the Union Tabernacle (1859).

By spring 1858, the popularity of the meetings had grown so much that the YMCA officials began looking for more far-reaching accommodations. The organization decided to experiment with an unconventional, mobile worship space and purchased the Union Tabernacle, a movable structure that could be set up virtually anywhere in the city. “Union” referred to the joining of the several denominations involved in the project, and “Tabernacle” was a reference to early Israeli canvas tents and the portable dwelling of the divine presence in biblical times.

The hefty muslin cost $2,000 and was purchased with the approval of John Wanamaker, who was the national secretary of YMCA. A devout Presbyterian, Wanamaker was a Sunday school teacher in 1856 at Wylie-Chambers Memorial Church, now the Broad Street Ministry. Two years later, at age 20, Wanamaker became the first full-time national secretary-general of the YMCA. He used his $1000 annual salary to both establish the Wanamaker’s Department Store and to help the YMCA pursue its evangelistic mission in Philadelphia.

Union Tabernacle was oblong with two thick poles and had loose canvas partitions that divided its interior into sections to accommodate crowds of varying sizes. Waterproof and weather resistant, the mobile Tabernacle could host up to 3,000 people, though its size was often insufficient for the large crowds. 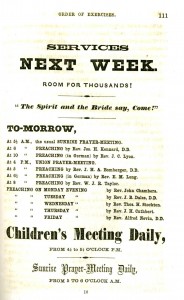 An advertisement for a prayer meeting | Source: The Union Tabernacle; or Moveable Tent-Church: Showing in Its Rise and Success a New Department of Christian Enterprise (1859)

Services in Union Tabernacle, or the “Movable Tent-Church,” as it was commonly called, began in May 1858. The prayer meetings and other religious events were supported by almost 20 denominations operating in Philadelphia at that time–Episcopalians, Lutherans, Presbyterians, Baptists, Moravians, German Reformed, and Dutch Reformed. Meetings in English and German were held daily. Evening prayer sessions were led by the ministers of the aforementioned denominations.

The Union Tabernacle tent was set up at four different places during its four and a half months in Philadelphia: Broad and Spruce Streets, on the west side of Broad Street next to the Academy of Music, at Tenth and Callowhill Streets, in Northern Liberties at Fourth and George Streets, and at Broad Street and Girard Avenue. The tent locations indicate that wide open spaces were still available around the core of the city before the Civil War.

The Union Tabernacle resembled a circus tent, and the flurry of activity required to raise it at each location was enough to draw a curious crowd. Unlike a church, the tent’s informality was not intimidating to the poor and made worship meetings more attractive and accessible.

The Union Tabernacle was dedicated at its first location near Broad and Spruce Streets on May 1, 1858. A group of 50 evangelical ministers occupied the platform in the center of the tent to participate in the service. “For some time past, a mammoth Tent has been in process of erection on the lot of ground immediately adjoining the Academy of Music, on Broad Street, under the auspices of the Young Men’s Christian Association, whose good works are the theme of every philanthropist’s praise, and whose heavenly mission is fulfilled with the ardor and zeal which are the beautiful and blessed attributes of youth,” reported the Philadelphia Evening Journal .

The tent remained for a few weeks and during that time took on the characteristics of a festival, showcasing various evangelical speakers who appealed to a diverse population. The tent’s impermanence stressed to those seeing it that they must come to God now rather than wait, since it would only be a matter of time before the mobile church moved on. Neighborhood residents often rushed to attend a meeting or two when it was announced that the Union Tabernacle would be transported to another location. 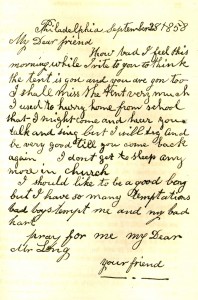 A replica of one of the letters from children that Rev. Long received | Source: The Children of the Tent; Or, the Work of God Among the Young, At the Union Tabernacle (1859).

The notion of using a tent for worship originated with the Union Tabernacle Association, which was based in the First Presbyterian Church of Norristown. Reverend Edwin M. Long, the superintendent of the Union Tabernacle, first experimented with a gigantic tent to spread the gospel. Long had been a traveling preacher and a Presbyterian missionary in the rural areas of southeastern Pennsylvania before becoming an agent for the American Tract Society. After joining the Reformed Church, thinking he could do better work preaching in the German language, Long then became associated with the Union Tabernacle Association. In 1859, with his book, The Union Tabernacle; or Moveable Tent-Church: Showing in Its Rise and Success a New Department of Christian Enterprise, he recounted the religious experiment.

According to the YMCA, the Union Tabernacle experiment produced overwhelming results in 1858. Between 150,000 to 170,000 people attended some 330 meetings held inside the tent.

Many of the converted later sent testimonials to Superintendent Long. He received several hundred letters, many of them from children, including this letter from a young girl: “I enjoyed many precious seasons in the Tent when it was at the corner of Broad Street and Girard Avenue. Since that time, I have been buried with Christ in baptism and united with the church. Pray for me, for I am very young–twelve years old, and surrounded by temptation–that I may be kept faithful, grow in grace, and become a useful disciple of Christ.”

Responding to the tent’s appeal to children, Long produced a sequel to his Moveable Tent-Church book. The Children of the Tent; Or, the Work of God Among the Young, At the Union Tabernacle was also published in 1859 and contained the reproduction of over one hundred letters from youngsters who had experienced a spiritual awakening inside the tent.

The Union Tabernacle’s popularity only increased until its final prayer meeting at Broad and Girard. Long later estimated that using the tent in Philadelphia had cost a paltry $1,830. He declared it “a cheap instrumentality for conveying the gospel message to multitudes who otherwise would not receive it.” Long relocated the tent to Quakertown, PA where it was used for prayer meetings and services for almost a month. It was then used at other Pennsylvania locations, and perhaps elsewhere in the nation. The Union Tabernacle’s final resting place is unknown.