Back From The Brink In Kingsessing 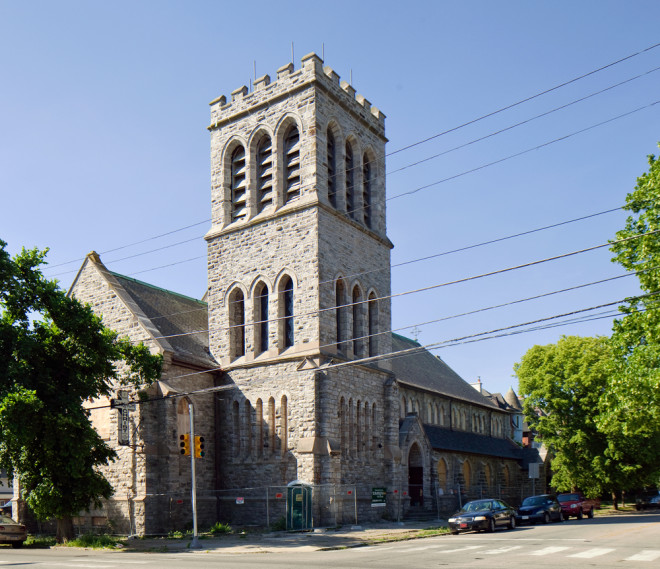 Editor’s note: A version of this story was published in the second issue of Extant, a new publication by the Preservation Alliance for Greater Philadelphia.

Aaron Wunsch, a professor of historic preservation at the University of Pennsylvania, didn’t really mind that he was working alone last June as he methodically nailed plywood over the shattered windows of the Protestant Episcopal Church of the Atonement in Southwest Philadelphia. But what did make Wunsch angry were the circumstances that had allowed the building—designed by Furness, Evans & Co. in 1901 but not historically certified—to become so dilapidated.

If only he knew, as the sun beat down on his back, that he wasn’t alone in his quixotic determination to protect the Gothic Revival-style church at 47th Street and Kingsessing Avenue. The rescue effort would ultimately involve a cast of characters that included a savvy engineer who spotted previously undetected evidence of steel supports, a former mayor who exercised both his innate southern charm and his acquired civic muscle, and a developer who had a penchant for redeveloping challenging properties.

The profuse expense of time and dollars, of tact and sweat, would pay off. The building was eventually shored up and the planned demolition cancelled; today, a pre-school is slated to move into the main sanctuary. Before that happens, though, workers are concentrating on getting the adjacent parish hall ready for a local day-care center.

A Building in Crisis 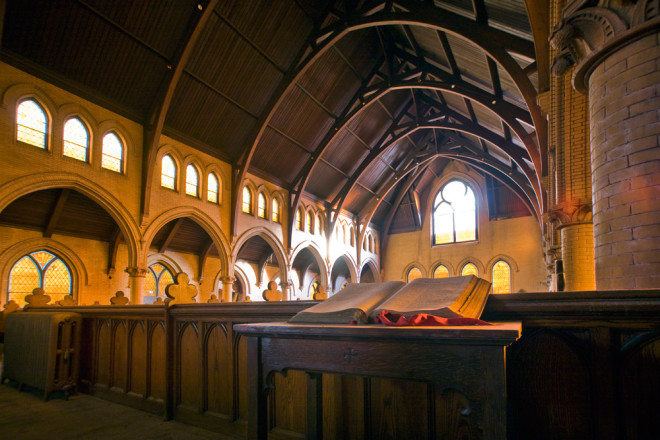 Even though it was in terrible shape, Atonement’s interior still looked lovely in 2013 | Photo: Bradley Maule

Wunsch, who lives nearby, had observed the church’s deterioration for years. Kids started throwing rocks through its stained glass windows and one eventually crashed to the ground. Then, a crucifix tumbled ignominiously from one of its gables. “Suddenly,” Wunsch says, “the vacancy of the building became more obvious.”

Others were noticing, too. “The whole neighborhood knew it was vacant and not being cared for properly,” says Ryan Spak, who leads the University City District’s Project Rehab program. The church did have an active congregation—St. Peter’s Church of Christ, which purchased the property in 1979—but its numbers waned, and in recent years services were moved into to the parish house. As far back as 2012, Spak had reached out to St. Peter’s pastor, the Rev. Clyde Brown. He’d even staged an intervention, with colleagues of Brown coming from as far away as upstate New York and Virginia to convince the pastor of the need to take action.

Brown resisted. “Naturally, I was reluctant to sell the buildings,” he says now, “even though I didn’t have the money to take on repairs and membership had been going down for quite awhile. But I knew the people who still came were attached to the place. That’s a hard thing to give up.” 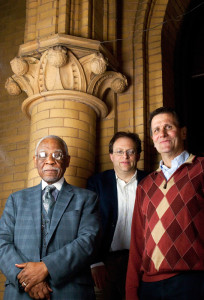 Reverend Dr. W. Wilson Goode, Sr., the former mayor of Philadelphia who has also served on the board of the Philadelphia-based nonprofit Partners for Sacred Places, has heard the argument before. Now the director of Amachi, a faith-based mentoring organization, Goode says that parishioners and their leaders can be reluctant to face the “reality that a deteriorating building and a dwindling congregation may be hampering the ministry. They need to understand that, particularly in a low income neighborhood, having the building be targeted for demolition and then ending up with a vacant lot won’t help anyone.”

By some estimates, up to 200 of Philadelphia’s purpose-built churches may face dire circumstances akin to those that challenged Atonement. PennPraxis is working with Partners for Sacred Places on a project that will research 20 to 30 of these struggling churches, investigating both internal factors (church leadership, congregational size, finances) and external factors (neighborhood demographics, the local economy, etc.) that led to their difficulties. “We hope to get a much stronger sense of the trajectory of congregations and their buildings,” says Partners’ president A. Robert Jaeger. “It will be groundbreaking — the first of its kind in America — and I think it will wake up a lot of people as to the state of these incredible resources.”

It’s best that the awakening occurs well before concerned neighbors and city agencies start panicking, as those working with Rev. Brown discovered. “All of a sudden, the city put a microscope on the property and started sending inspectors,” says Spak. “Every time someone came out, I would receive notice and eventually we saw the lawsuit paperwork that would turn into the demolition notice.”

Spak and Brown decided to challenge the demolition permit; local developer Guy Laren tagged along to the Municipal Court hearing. Laren offered to pay for quick fixes to shore up the structure, but the judge refused to give them more time, apparently sealing the building’s fate. Demolition was scheduled to begin on June 9, 2014, a Department of Licenses and Inspections official told Philadelphia City Paper.

Making Moves at the 11th Hour 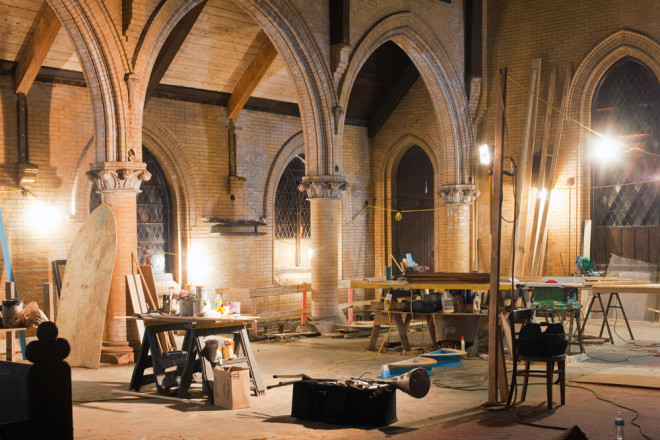 Inside Church of the Atonement’s main sanctuary | Photo: Peter Woodall

Despite the looming threat of demolition, Wunsch decided to do something. He knew that L&I ordered demolitions without the benefit of an engineer’s report, and suspected the church didn’t really need to be torn down. To Wunsch, L&I had become too quick on the trigger in the wake of the deadly 2013 building collapse at 22nd and Market Streets — an event some officials seemed eager to blame on old buildings rather than on contractor or regulator negligence. After trying and failing to reach Rev. Brown on the phone, Wunsch started chatting him up after services. Their conversations would go something like this:

Would you mind if I take a few steps to make the building more secure?

Not if I can help it! 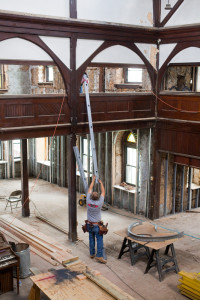 And so Wunsch started boarding up windows, with the pastor gamely standing by and occasionally fetching extension cords for the professor’s power tools. Yet Wunsch also knew that with demolition imminent, he needed to work fast behind the scenes to buy more time for the building. So Wunsch contacted Laren to see if he was still interested in purchasing the property, and got in touch with Goode, who a few years back had helped him orchestrate a similar rescue of another Furness church, 19th Street Baptist in Point Breeze.

Laren confirmed his willingness to purchase the building if it was structurally sound. The developer wryly characterizes himself as someone who “specializes in money-losing churches.” In 2007, he acquired the nearby Christ Memorial Reformed Episcopal Church, even though it had lost one of its towers to a lightning strike three years earlier. A Penn graduate, Laren started his real estate career by picking up cheap properties in West Philly and renovating them for mid-tier residential use. “I’m in the area,” he says, “precisely because I enjoy walking and encountering something like a Furness building on a corner.”

With Laren offering to pay for a new engineering report, Wunsch called on his former colleague Justin Spivey, an engineer with Wiss, Janney, Elstner Associates, Inc. (WJE), who specializes in assessing historic structures. While acknowledging the building’s poor condition, WJE’s July 2nd letter to L&I emphasized that “we did not note any substantial structural distress in the building envelope.” In addition, the engineers explained that they had observed steel inside the buttresses, which led them to believe structural steel likely supported the main roof and tower as well. 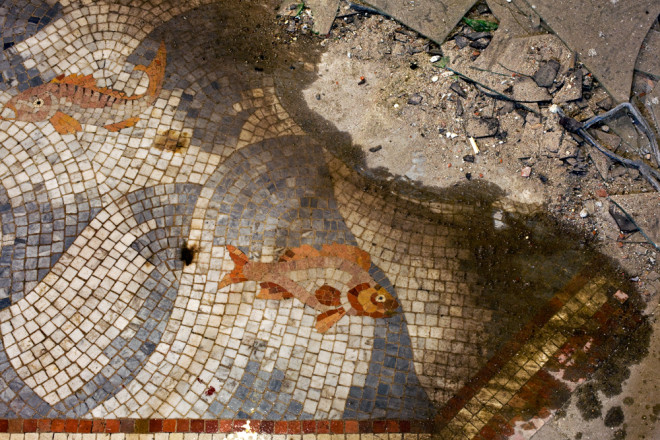 A splash of water revealed that the still-vibrant color of these mosaic tiles | Photo: Peter Woodall

WJE’s letter indicating that the building was not an immediate threat to public safety in turn gave Goode the evidence he needed to ask L&I Commissioner Carlton Williams to postpone demolition. “I felt that the city part would work out fine, as long as we presented them with a plan and acted on it.” Rev. Goode says. “The challenge was really the fragile nature of the church structure, by which,” he adds with an amused cackle, “I mean organizationally.” Goode wove himself into the pastor’s good graces when he pointed out that his mother’s maiden name was also Brown, and that both he and Rev. Brown hailed from the same part of North Carolina.

By the end of the summer, Laren had received permission from church leadership to bring in some contractors to tackle emergency work. “I didn’t take ownership until January of this year,” Laren says, “but I wanted to get moving on taking care of the worst deterioration. What I thought would take sixty days took five months. I’m glad we saved it — but I haven’t taken a dime of rent yet.” Laren has spent “hundreds of thousands of dollars” so far and assembled a team of carpenters and other workers who are “basically fans of This Old House,” as he characterizes them with a laugh.

Today, instead of one lone professor with a hammer, a cadre of workers move through the building, replacing joists and termite-eaten flooring and repairing damaged windows. There is still a long way to go, but thanks to the persistence of an unusual team of determined advocates, Church of the Atonement is well on its way to redemption.

Joann Greco Freelance journalist JoAnn Greco writes about the fascinating people, places, trends, and stories found in the worlds of urban planning, arts and culture, design, hospitality, travel and, of course, Philadelphia. Her work has been published in the Washington Post, Art & Antiques, Toronto Globe and Mail, Amtrak’s Arrive, PlanPhilly, Penn Gazette, and dozens of others. She lives in Bella Vista and can be reached by tweeting her @joanngreco.