An Historian At The Intersection Of Class And Preservation

Old buildings and butterflies share something in common. Stunning examples of both often serve as sole specimens in a rare collection. That doesn’t sit well with Michael Schreiber, Queen Village historian, author, and activist. He believes that preservation should act as an implement for social change and urban improvement. Schreiber’s multifaceted view embraces not only the preservation of individual buildings, but the integrity of entire neighborhoods that serve as the historic and cultural identity of the entire city. 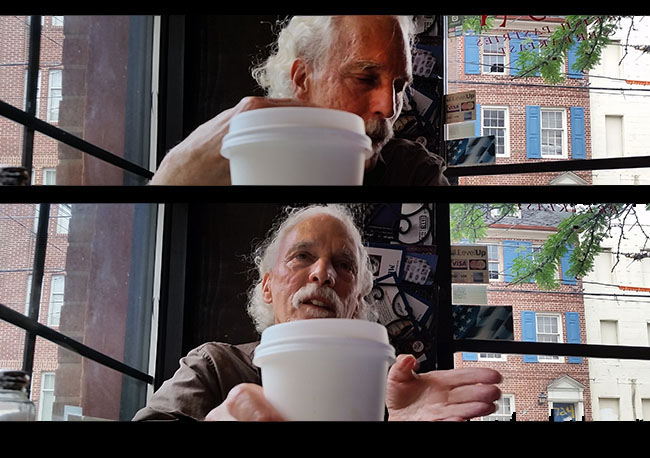 Schreiber grew up in West Oak Lane. He lived in San Francisco for 40 years, working 29 years as a trolley driver before returning home to Philadelphia in 2009. Schreiber is passionate about the city’s social history. Conversations with him take you on a detailed journey from one house to the next, from street to neighborhood, and from colonial times to the present. His historical research into the lives of the city’s working class has informed his socialist opinions about preservation, urban social structures, and how income and housing issues affect class in present day Philadelphia.

Of Preservation and Socialism

“I’m now 70. When I was a child, teenager, and college student I would bicycle the streets and go everywhere. I was horrified to see whole neighborhoods in the city being demolished,” says Schreiber.” I look wistfully back at what we once had and those buildings that have not yet been appropriated. The willingness to demolish what remains of the old city means we are gradually erasing the cultural record of what makes us.”

Raised by socialist parents who were antique dealers and editor of the newspaper Socialist Action for 25 years, Schreiber notes, “My life has always been very political.” As a child, Schreiber put on Civil War caps and sifted through old newspapers. He worked in restaurants, on ships, and streetcars, always aware of the way history tends to devalue working people. “History is not just about the Thomas Jeffersons and George Washingtons,” he says. Schreiber believes that preservation is intrinsically intertwined with social justice. He sees both as part of a larger aim to protect the past while securing the cultural history of every citizen. 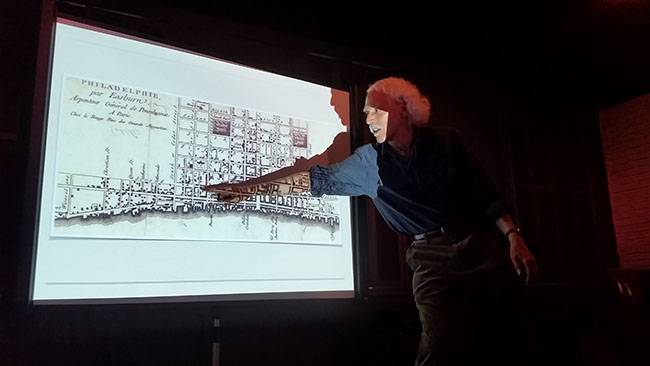 Schreiber points to map of the Philadelphia waterfront in 1776 during a lecture | Photo: Joseph G. Brin

“Preservation is not antithetical to progress. Preservation is a part of progress,” says Schreiber. It’s not only about buildings, he says, it’s about the unfortunate who bear the brunt of poverty, neglect, and loss of culture brought on by demolition and redevelopment.

Schreiber believes the only way for Philadelphia to protect its historic buildings and its working class neighborhoods from both blight and gentrification is through mobilizing on the local level. He notes that the competition among major cities for the same pool of increasingly limited federal dollars is limiting and ultimately destructive. “Philadelphia is going to be an ‘Energy Hub.’ What’s that?” he asks rhetorically. He believes the projected job growth from the city’s natural gas and oil sector is overstated, the creation of wealth exclusive to the upper class. He sees the gap widening between private profit-driven revitalization and basic public needs like schools and affordable housing. Schreiber believes that a mass movement of the people most affected by gentrification could aid in tackling development that adversely targets race and class.

Curiosity about the age and history of his own home–built in 1832 by carpenter John J. Oliver on the former Oliver’s Court–led Schreiber to the first City street directory, published in 1785. In the course of his research he came across Thomas Cave, an intriguing, obscure character that lived on his street in the 19th century. “I didn’t set out to write a book,” says Schreiber. About 800 pages later, he had brought Cave, who came from Dublin, Ireland as an indentured servant, back to life. 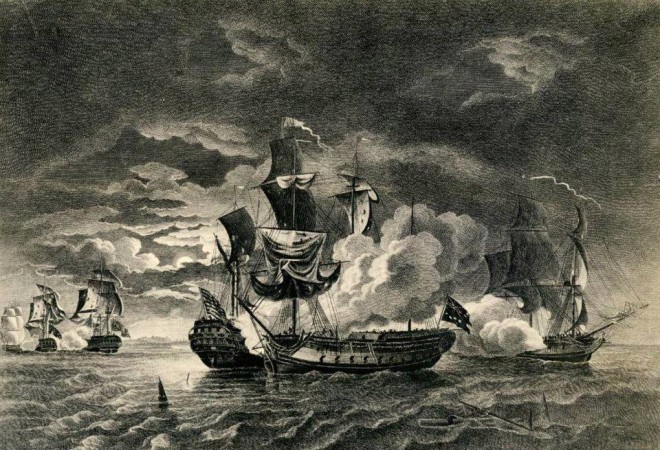 Thomas Cave was a sailor in the fleet of Revolutionary War naval hero John Paul Jones during the during the Battle of Flamborough Head. Pictured is the American frigate Bonhomme Richard clashing with Britain’s HMS Serapis on September 23rd, 1779 | Courtesy of the Beverly R. Robinson Collection at the U.S. Naval Institute

After fulfilling his servitude to a miller in Cumberland County, Cave came to Philadelphia and shipped out on the Continental Navy war sloop Hornet during the Revolutionary War. He was captured in battle off Turk Island in the West Indies and spent six months in the dungeons of old Fort Charles in Port Royal, Jamaica. He was later transported later to England and spent two more years at Fortin Prison, near Portsmouth. Cave was freed in a prisoner exchange in the summer of 1778.

He re-enlisted as a seaman on one of the vessels in John Paul Jones’s fleet, fighting alongside Jones in the battle of Flamborough Head. Cave was recaptured by the British, though he escaped from prison and made his way to France toward the close of the war, where Benjamin Franklin lent him money to return to Philadelphia. Schreiber notes that the original loan documents of Cave and other American escaped sailors are housed in the archives at the American Philosophical Society. 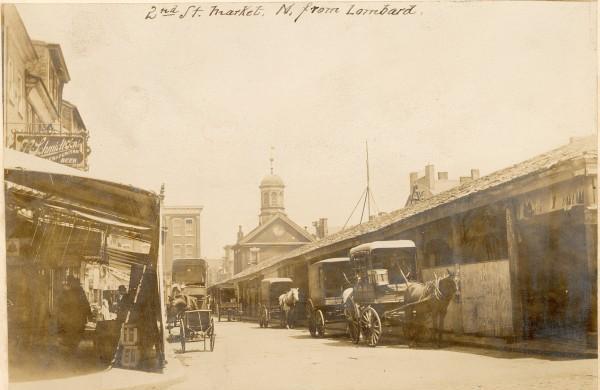 Cave was a literate man and became a Mason of some prominence. He had strong ties to the neighborhood around Headhouse Square and served as a constable of the district. He lived opposite of the market sheds and ran a grocery store on 2nd Street. Cave was a co-founder of the Hope Hose Company, which stored its equipment in the Shambles, where, as an activist in the Democratic-Republican Party, he also attended political meetings on the second floor.

Cave died along the banks of the Schuylkill River in 1815 within the vicinity of the PES Philadelphia Oil Refinery and is buried with family members in the churchyard of St. Paul’s Church at 808 S. Hutchinson Street.

“The next book I have in mind is to continue the saga in the 1830s-40s that was a tumultuous period for common people,” says Schreiber. He says there is much more to be explored in the racial and religious riots that erupted in Philadelphia against blacks and Irish Catholics, a period that also marked the first general strike by workers. This particular confluence of social strife and struggle embodies much of what Schreiber has focused on for decades.