A Salty Success On Susquehanna Avenue 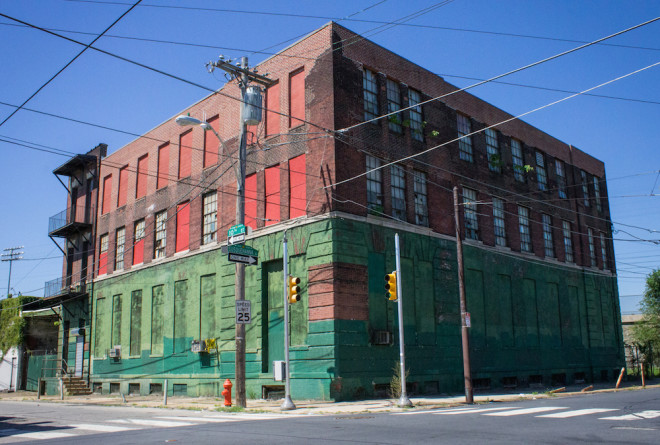 The battered baking factory on Susquehanna Avenue was once the epicenter of American pretzel production. | Photo: Michael Bixler

Oakdale Baking Company cornered the national pretzel market for the first half of the 20th century with cunning business practices and a snack food monopoly. The company’s main factory and original headquarters at 10th Street and West Susquehanna Avenue now sits sealed and decaying. A ghost sign on the building’s west-facing wall quietly fades with the history of North Philadelphia’s once-booming baking business.

The Rise of a Pretzel Empire

Oakdale Baking Company’s baking facility was designed by Hales and Ballinger. Operations began in 1903 when the building was complete. The baking facility was constructed with four stories despite an original plan for three. The company started out small, but would find big success shortly after Oakland, PA native Lorraine James Schumaker was hired as the director of sales.

L.J. Schumaker, known as a master of numbers, was a graduate of Bucknell University and went into sales after working as a public school teacher. His reputation quickly spread and companies sought him out for consultation. He even assisted local courts with complex business arrangements. Schumaker became president of Oakdale Baking after working for the company for only a few years. He also served as head of the Mayers-Mallory Coal Company that was located in the lot just south of the baking factory. 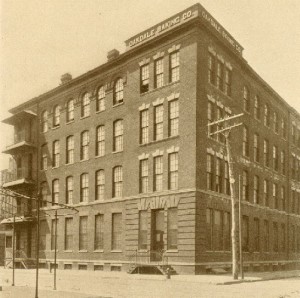 Oakdale Bakery in 1905 | Courtesy of the Athenaeum of Philadelphia

Schumaker cornered the pretzel market in 1917 when he merged Oakdale Baking with the country’s other major pretzel makers–the Columbia and Pfenninger Companies of St. Louis, the Queen City Pretzel Company of Cincinnati, and the National Pretzel Company of Hamilton, Ohio–into one large corporation, The American Pretzel Company. The monopoly had offices in the Widener Building at 1339 Chestnut Street and its primary baking operations were at the 10th and Susquehanna factory. All patents held on the latest pretzel-baking machinery were owned by the American Pretzel Company. The corporation became the leading pretzel maker in America and controlled 80 percent of all pretzel production at the time. Sixteen million pounds of pretzels were produced annually by the new corporation, and Schumaker’s innovations made sure that nothing went to waste. Even pretzels that crumbled during production were packaged and sold as “pretzel meal,” an alternative to bread crumbs.

Schumaker, eager to see the business expand, entered the ice cream cone market in 1920, and changed the company’s name to the American Cone and Pretzel Company. That same year the company applied to copyright the name Rold Gold Butter Pretzels, its newest product line, ironically made with a special formula that used substitutes like lard in place of actual butter.

The corporation produced a steady stream of new patents for pretzels and ice cream cones in 1920, which led to Schumaker’s election as president of the Pennsylvania Association of the Baking Industry. During this time the pretzel baron applied his business acumen to other markets as well and started both a canning enterprise, the Continental Packing Company in Macon, Georgia, and another company that refined natural gas.

A Hot Bakery Cools Down 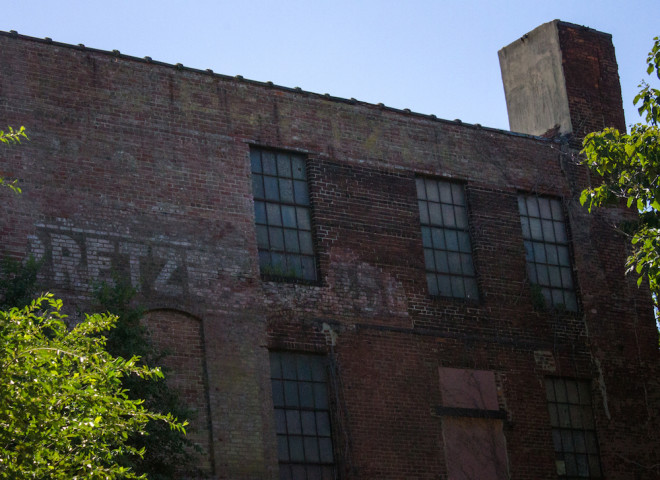 A ghost sign lurks in the shadows of the west-facing wall of the former pretzel factory. | Photo: Michael Bixler

Although the bakery’s structure was fireproof, American Cone and Pretzel suffered frequent fire damage from sparks and burning coals that would fall off trains passing along the Philadelphia & Reading Company’s viaduct. One particular fire on September 5, 1909 consumed both the bakery and much of the surrounding blocks. Oakdale Baking Company sued the Philadelphia & Reading Railway (244 Pa. 1914). Both the baking company and the coal company won the lawsuit and received over $21,000 in damages.

In 1922, a fire destroyed the bakery. Schumaker hired A. Raymond Raff, the original building contractor of his first bakery, to perform a complete renovation of the factory and reduce it to three stories.

When Schumaker died in 1948 the American Cone and Pretzel Company was colloquially known as Rold Gold, the popular pretzel line that still fills supermarket shelves today.

By the early 1950s the company had production facilities and offices all over the country and the original Philadelphia bakery was finally vacated. Frito Lay purchased the company in 1961.

Randolph Metal Works moved into the factory and made metal lamps and smoking stands there throughout the 1950s. An odd assortment of bed springs manufacturing, birdfeed storage, and decorative plaster statue production filled the building in the 1960s. Globe Metal Manufacturing Company bought the building in 1967. However, research indicates that the building is presently abandoned.