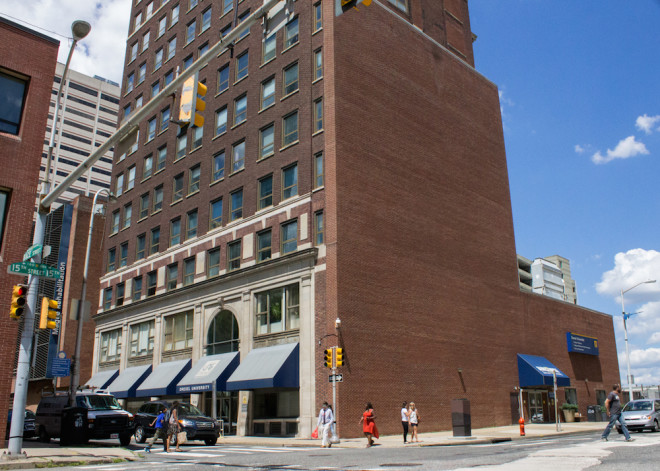 The party wall where the Schaff Building addition connected to the much smaller Reformed Church Building that was demolished in 1990 | Photo: Michael Bixler

The Schaff Building at 1505 Race Street is among a number of building additions in Center City that have managed to outlive the original. Built by the Sunday School Board of the Reformed Church in honor of religious scholar Phillip Schaff, the building shares a similar fate with the addition to the old Aldine Hotel–replaced by the Boyd Theater–that survives as the 1920 Chestnut Condominiums. The original Reformed Church Building was demolished to make way for the widening of the Vine Street Expressway on-ramp, but its much larger annex, now occupied by Drexel University College of Medicine, carries on.

The Sunday School Board of the Reformed Church announced the construction a new seven story building at the northwest corner of 15th and Race Streets in 1907 designed by the short-lived architecture firm of Bolton & Dull. When the building was completed in March 1908, the SSBRC gave naming rights to its first and second floor tenant, the Fairmount Savings and Trust Company, but it was known colloquially as the Reform Church Building. 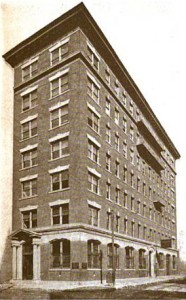 It was an imposing structure for the corner of 15th and Race. Talk of an addition that would fill the parcels the SSBRC owned along the rest of the block towards N. Hicks Street began soon after the parent building’s opening. The SSBRC commissioned the same architectural firm (now just called Charles W. Bolton) in 1912 to design the annex. However, plans changed on August 13th, 1913 when 100 ministers and “men of affairs” representing several Christian denominations formed the Phillip Schaff Memorial Committee and set out to memorialize the religious scholar by devoting the new annex to space for Christian organizations.

Schaff was a prominent 19th century Christian historian, biblical scholar, and theologian. He was born in Switzerland and educated in Germany, but spent the rest of his life living and working in America. Schaff specialized in the history of Christianity. He was also passionate about the potential for future reunification of the world’s many Christian denominations. Schaff believed that the technology innovations of the 20th century, particularly the evolving speed of communication advancements, would lead to a new understanding between the denominations.

Schaff died in 1893, one month after giving his final lecture, “The Reunion of Christendom,” at the World’s Parliament of Religions. The presentation was the culmination of his life’s work and served as a blueprint for many Christians engaged in reunification efforts throughout the 20th century.

Continuing the Work of Schaff

The Phillip Schaff Memorial Committee was created to follow Schaff’s philosophy of cooperation and unity between Christian denominations and organizations. The committee envisioned the Reformed Church Building’s addition as a hub for Christian organizations from all denominations and wanted the new building to stand out as a landmark for both the legacy of Phillip Schaff and Christendom. 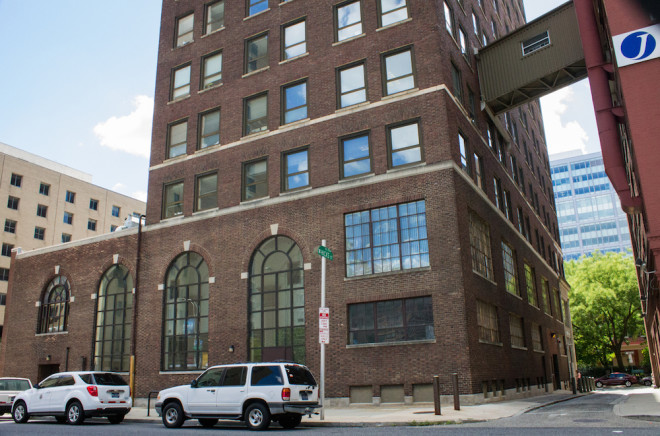 Instead of again hiring little-known local architect Charles Bolton, who mostly designed churches, the committee commissioned the esteemed Chicago-based firm Marshall & Fox. At the time the firm claimed only one building in Philadelphia, the old Forrest Theater-Retail Building that once stood at Broad and Sansom Streets. Planning and funding for the new 13 story Schaff Building took nine years. The Fairmount Savings and Trust Company moved out of the Reformed Church Building in the interim, and the Parkway Trust Company took its place.

Getting the funding together for the new Schaff Building proved difficult. At the start of 1922, the SSBRC offered five-eight percent shares in the building to the public. “Every Christian owes a debt of gratitude to Dr. Schaff,” read advertisement for the share holding sale. The strategy proved successful and on July 22, 1922 ground was broken on the project by Cramp & Company, the same contractors who built the Reformed Church Building. 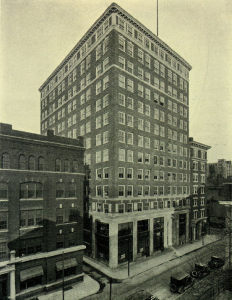 The Schaff Building in 1924 | Source: AIA/T-Square Yearbook from the holdings of The Athenaeum of Philadelphia

The new Schaff Building was dedicated in late October 1923 with a large celebration held by the members of the SSBRC. As planned, the building was successful in welcoming numerous interdenominational Christian organizations. The first tenants were the Philadelphia Federation of Churches, the Lord’s Day Alliance of Pennsylvania Philadelphia, the Sabbath Association, the Pennsylvania Anti Saloon League, the Presbyterian Magazine of the Presbyterian Church USA, the Boards of the United Presbyterian Church, the Boards and Agencies of the Reformed Church, the Philadelphia Christian Endeavor Union, and the Brotherhood of Andrew & Philip.

In addition to the offices above, the building offered a large auditorium on the first floor with four memorial stained glass windows honoring Schaff.

Over the next several decades various Christian organizations leased space in the Schaff Building. Offices were also available to secular organizations. Charles L. Bolton, the son of architect Charles W. Bolton, had his firm’s office there along with the Shur-Line Sales Company and several unions, including the Amusement Machine Association of Philadelphia and the Phonograph Operators’ Association of Eastern Pennsylvania and New Jersey.

Nearby Hahnemann Medical College and Hospital was leasing space in the building as early as 1965. There was a gradual tenant shift at the end of the 20th century and secular businesses leasing office space began to outnumber the religious organizations. Two Christian publications remained in the building when it was renamed the Bellet Building of the Hahnemann Medical College in 1982. Among the last organizations not related to Hahnemann leasing space in the building was the Indian Rights Association, the oldest surviving advocacy group for Native Americans that was founded in Philadelphia in 1882. 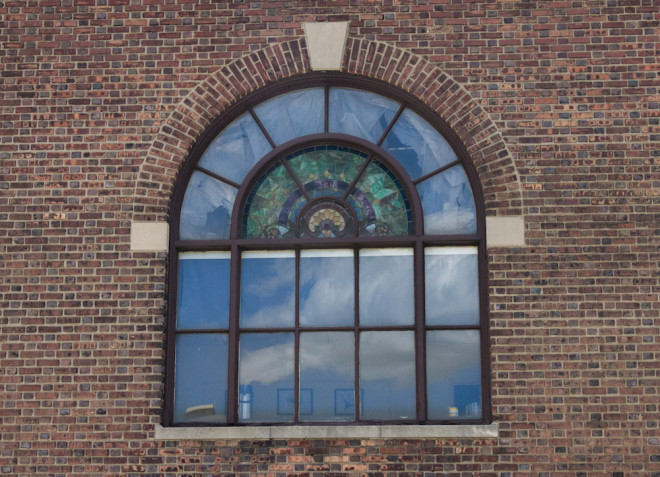 One remaining stained glass window of four that was installed to honor celebrated Christian scholar Phillip Schaff. The words in the center banner read, “Let Us Unite For The Children” | Photo: Michael Bixler

In 1990, the 82-year-old Reformed Church Building was demolished to make way for the widening of 15th Street to accommodate the Vine Street Expressway off-ramp a few blocks to the north. The old Schaff Building still carries a small sliver of its predecessor on its eastern party wall that illustrates exactly where it was connected. The surviving annex now has an entrance on the 15th Street side.