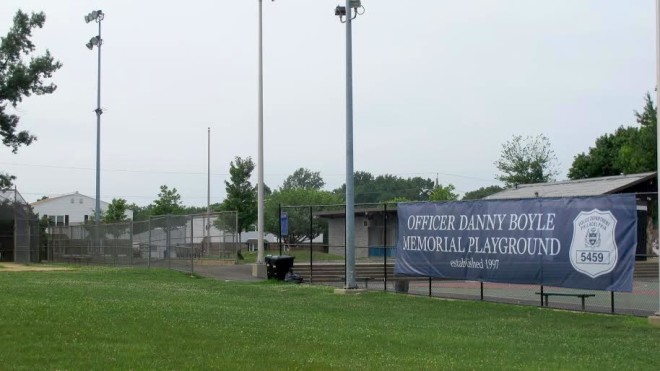 A playground in Somerton named after Officer Danny Boyle who was killed in the line of duty in 1991. Combined with Bustleton to the north, the neighborhoods hold 13.8% of the city’s officers, and 4.2% of the population of the city as a whole | Photo: David Hilbert

The discussion about police officers’ exact role in the communities they serve has become more pronounced recently following last year’s shooting of Michael Brown in Ferguson, Missouri ­and Trayvon Martin in Florida in 2012. Some journalists are beginning to reexamine where police officers return to at the end of their shifts. The general premise is that officers who live within or near the communities they serve are more likely to develop the empathy and awareness necessary to excel at their job.

One mechanism that cities have historically used to keep police officers, among other civil servants, inside city limits and thus as part of their tax base, has been the residency requirement. However, these have been becoming increasingly rare across the country, with public-sector unions finding rare common cause with conservatives in demanding their employees’ freedom to live wherever they choose. As residency requirements have fallen, so have percentages of police living within city limits.

The change has not been as drastic in Philadelphia as in other big cities. The city’s residency requirement, once absolute, has been weakened by a series of resolutions proposed by the police union. Currently, non-resident hires are required to move into the city within six months of their promotion to full-fledged officer and are allowed to move away after five years on the job. Nonetheless, relatively few officers have taken advantage of the opportunity to move outside of city limits, with less than 10 percent of Philadelphia police officers living outside of the city’s boundaries, compared to around 40 percent for New York and a staggering 90 percent for Miami.

Within the city, however, distribution of police residence is far from uniform. Anybody who has spent enough time in Philadelphia acquires the image of the city’s Northeast as a bastion of police and firefighters, an image that is largely truthful. A map published by The Inquirer displays the number of police residing in each of the city’s zip codes, confirming the clustering of police officers in the city’s most far-flung, suburban-adjacent neighborhoods. 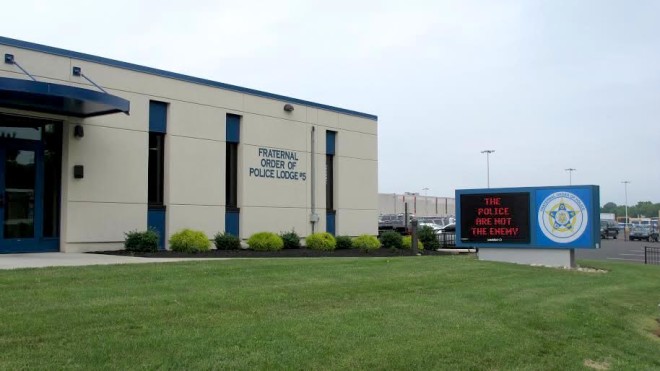 If someone were trying to discover a clear-cut correlation with race, the map would be illuminating. Many of the police-filled neighborhoods in the Northeast and Northwest are indeed whiter than the city norm, but not overwhelmingly so, contrary to common assumption. Also, many zip codes which a high white population elsewhere in the city are actually underrepresented. Showing the strongest police residency presence, in fact, are the African American middle class enclaves of Oak Lane and Wynnefield.

The common thread between these neighborhoods is a solid middle class, a relatively narrow income range, and an automobile dependency above the city norm. Overwhelmingly built in the 40 years between 1920 and 1960, the developers of neighborhoods the Northeast aspired, and succeeded, in making them much more automobile-friendly than anything built in the city before, while building more efficiently, if perhaps more predictably, than their predecessors. Thus, it is only natural that police officers, who work within an extremely automobile-dependent profession, earning a predictable middle class income, would gravitate to these neighborhoods.

This has not been always been the case, however. We took a look at where police lived in Philadelphia just before the development of the city’s fringes before driving became a crucial component of an officer’s job. In the City Archives, we discovered the address book of all 6,008 police officers on the city’s payroll in 1925, and arranged them by zip code. 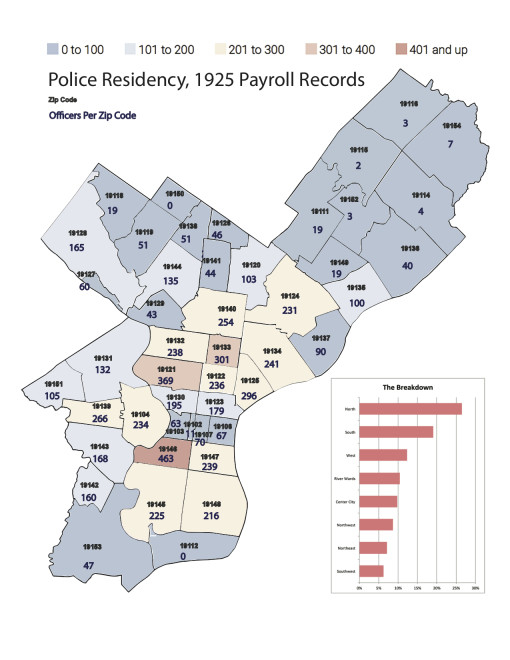 In 1925, the fringes of the city were almost entirely farmland, so many zip codes in the Upper Northeast that today house hundreds of officers at the turn of the century held single-digit numbers. Conversely, many neighborhoods that today are more likely to see officers on the job rather than off the clock, such as 19133 with its current paltry total of 18 officers, were then home to hundreds. Officers patrolled their beat largely by foot in neighborhoods very much like the ones they lived in, and would walk or take public transportation home.

As vehicle use on the job became more and more common for police, officers tended to use them more often to return home to neighborhoods further away. As the average officer gained a buffer of many miles between work and home, perhaps they were also began losing a sense of shared commonality and shared community with the neighborhoods they were patrolling. (They may also have been gaining a necessary distance from stress.)

The Philadelphia Police Department has made strides towards getting officers more acquainted with the citizens they serve on a pedestrian level while lowering the crime rate, according to a study by the Temple University Department of Criminal Justice, but the City’s effort to entice police officers to move into specific inner-city neighborhoods like Mantua has met with a lukewarm response. Perhaps the best we can hope for is that less driving on the job brought on by bicycle patrols could make officers a more relatable and more welcome presence in the neighborhoods they serve.