The Tastiest Morsel Of Season City 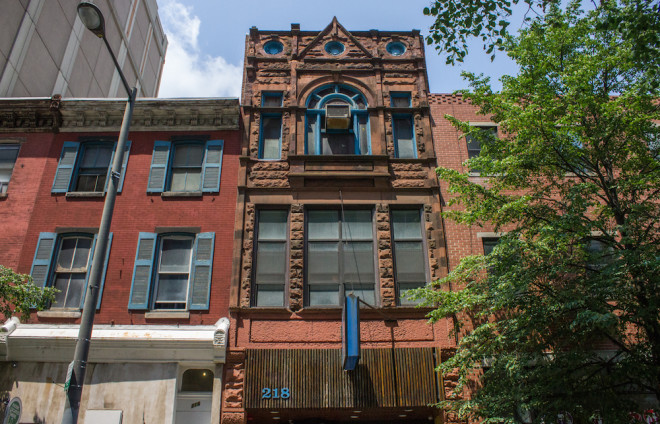 Bursting with a flavorful history. The former Ballinger Building, currently home to a dim sum restaurant, has seen many distinct tenants along the way | Photo: Michael Bixler

In what is arguably the most remote sector of Center City, an area I like to call Season City due to the presence of Summer Street, Spring Street, and Winter Court, lies the Ballinger Building, at 218 North 13th Street. An architectural standout, Ballinger would seem more appropriate on Chestnut Street where several other buildings by architect Albert W. Dilks remain today. Recently renovated for a dim sum restaurant, Nom Wah Tea Parlor, and two large apartments, this fanciful beauty has lived many colorful, contrasting lives.

The Ballinger architecture and engineering firm designed hundreds of buildings in Philadelphia throughout 20th century. The firm is impressively still in operation today under the same name, but it had nothing to do with the development of the Ballinger Building. For that we turn to F.A. Ballinger and Richard C. Ballinger.

F.A. Ballinger was a house painter and decorator who finished both the exteriors and interiors of the stately homes of Philadelphia’s elite and in other parts of the country. He pioneered several techniques in the trade and determined paint mixtures appropriate for different environments. For example, he came up with an exterior paint mixture that resisted mildew for Jersey Shore houses. An ambitious man, he was both a select councilman (back when City Council was a bicameral body) and president of the Master House Painters and Decorators of the U.S.A. 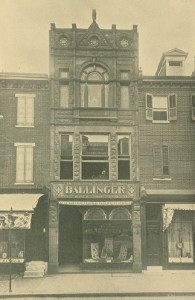 The Ballinger Building at 218 North 13th Street in 1899 | From “The Official Office Building Directory and Architectural Handbook of Philadelphia”. Courtesy of the Athenaeum of Philadelphia

In December 1890, Ballinger commissioned the prolific yet under-appreciated Philadelphia architect Albert W. Dilks for an office building and headquarters storefront at 218 North 13th Street that he would name after himself. Dilks did not disappoint, creating a Renaissance-style façade much more interesting than another design of his at 1606 Chestnut (still standing) that was built the same year and used the same façade material. Once the new Ballinger Building was complete, F.A. Ballinger set up his house painting headquarters. The unrelated Richard Ballinger used the offices above.

This Ballinger started as a bricklayer in his hometown of Salem, New Jersey and came to Philadelphia in 1868 to start his own bricklaying business. In 1889, he partnered with plumber and gas-fitter F. Douglass Hickman to create R.C. Ballinger & Company, Contractors, Builders, and Engineers. Richard C. Ballinger’s company went on to take over the whole building at 218 N 13th Street after F.A. Ballinger died in 1901.

Over the next three decades, R.C. Ballinger & Company became one of the most prolific builders in Philadelphia. The company built everything from mansions to schools to factories. Much of their work still stands today, notably William Penn Charter School’s Main Building and the Watkins/Wurlitzer Building at 1033 Chestnut Street that was also designed by Dilks and once housed the celebrated 1950s era local jazz musician breeding ground, Music City. 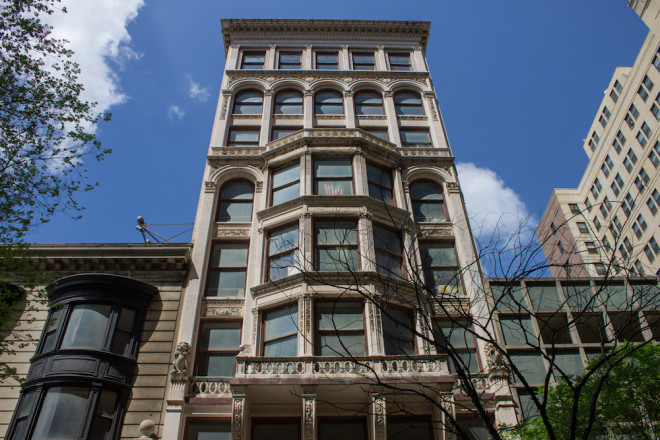 As the years passed, R.C. Ballinger & Company’s need for the 13th Street offices dwindled, perhaps due to the firm’s large workshop and warehouse in North Philadelphia. Mac Tire Company, the actually named Climax Lubricating Company, and Wrigley’s Chewing Gum’s Philadelphia office took up space in the building. By 1922, R.C. Ballinger & Company vacated the property and sold the building to Gara-McGinley & Company. R.C. Ballinger’s enterprise stayed in business a little over a decade after his death in 1929. Among the firm’s last buildings was the Merck & Company Drug Manufacturing plant at 4314 Ridge Avenue in East Falls, built in 1938. A section of the plant still stands today.

The new owners, Gara-McGinley & Company, were manufacturers of architectural sheet iron, white bronze monuments, metal cornices, skylights, and roofing materials. When they took possession of the old Ballinger Building in 1922 they combined it with a slim four-story factory building that backed up to it at 225 North Clarion Street, bringing the building up to its current 5,280 square foot size. Gara-McGinley & Company briefly shared the space with Spiro Brothers, a local radio parts manufacturer and distributor. In the 1930s, the storefront was home to Mary’s Flower Shoppe. 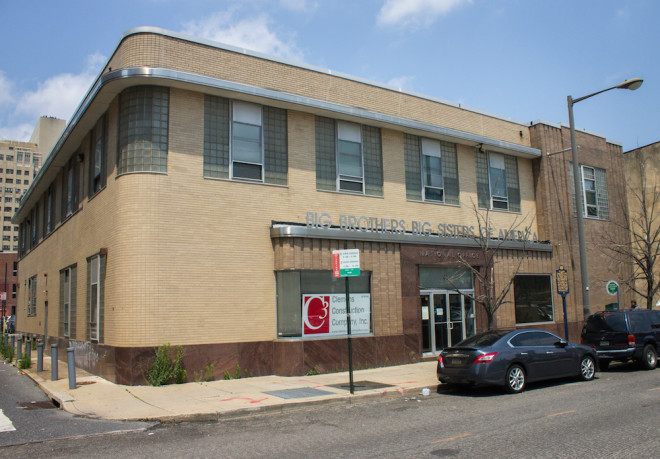 The Ballinger Building’s neighbor at 228 North 13th Street was the birthplace of NFL Films. Founded in 1965, the filmmaking arm of the company transformed how sports was presented on television | Photo: Michael Bixler

Starting in the early 20th century and running well into the 1960s, film exchange firms that stored and distributed film canisters to movie theater operators inhabited the area around 13th and Vine Streets. Though many of the later 20th century buildings created for this use were knocked down for the widening of Vine Street in the 1940s, and again by creation of Interstate 676 decades later, the most obvious remnants of Philadephia’s former “Heart of Filmdom” neighborhood are two Warner Brothers buildings: 228 North 13th Street, former headquarters of NFL Films and recently vacated by Big Brothers Big Sisters of America (likely to be redeveloped), and 1225 Vine Street, now the Hoyu Building.

In the 1960s, Barnard L. Sackett, a larger than life actor turned movie producer who had dreams of Philadelphia becoming a major movie town started his own film production company called Adelphia Pictures and, though headquartered in New York, had its Philadelphia office and distributorship at 218 North 13th Street in the Ballinger Building. Sackett started by writing and producing a documentary about silent films, but was later better known for producing and often starring in sexploitation flicks. He is most famous for All Men Are Apes and Eroticon. In the 1980s, Sackett moved back to Philadelphia, became WIP’s drama critic, and opened the On Stage Theater at 2020 Sansom Street–now the Sansom Street Gym—where he would often write and perform in his own one-man shows.

Dim Sum Of All Parts

In 1973, Hotel and Restaurant Employees’ International Alliance and Bartenders’ International League of America Local 111 took over the old Ballinger Building’s first floor, while the rest of the property was occupied by Cecil Baker’s architectural firm, BRHB Developers. BRHB rehabilitated $30 million worth of old buildings over the next decade, as Center City began its transformation.

From the late 1970s through the early 1980s, the Ballinger Building saw yet another life as the printing headquarters for Turtle Island Press, where local artist Claire Owen produced limited edition artistic books using traditional printing and binding methods. The company is still in business at 6129 Greene Street in Germantown.

In the early 1990s, Steven Lee Swerdlow took ownership of the building, where his company, Steve’s Instant Printing, operated until he sold the property in 2006. Buck’s Hardware next moved in from their former location a block away which was demolished for the Pennsylvania Convention Center expansion. In August, 2013, the building’s current owners, Wilson Tang and Eric Li, opened Nom Wah Tea Parlor, the Philadelphia outpost of New York City’s oldest Dim Sum restaurant.