Reactivate The City Branch With A Campus Green 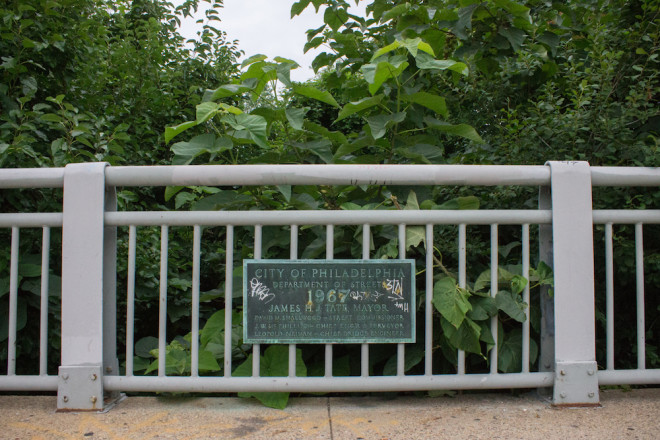 The abandoned City Branch “cut” grows out and over the 18th Street bridge on Community College of Philadelphia’s campus | Photo: Michael Bixler

Philadelphia may be known popularly for its colonial history, but its 19th and 20th century industrial landscape is more relevant to the city’s growth. Warehouses, mills, and factories are transforming from rusted shells of a bygone age to rustic condos for the millennial class. The piers along the Delaware River now house parks, concert venues, and beer gardens; and in the case of the Navy Yard, hotels and a modern business campus now sit on land that, long ago, regular citizens could only see from an airplane.

Perhaps nowhere does this reclamation of the industrial strike the civic heart more than in the plan to convert the Reading Viaduct into a public park.

On any given day, one can observe urban explorers, photographers, teenagers, or bridal parties traversing the flora-overgrown post-apocalypse of the elevated railway viaduct. Next year, the $9 million first phase of this project will begin the transformation from a trespasser’s liability into Philadelphia’s next urban gem: a Rittenhouse in the sky.

To be built by the Center City District under the design by Studio Bryan Hanes, phase one will remake a section of the elevated rail, from Broad and Noble Streets curving south toward Center City, leaving the long elevated section that extends north, owned by the Reading Company, and the below-grade rail bed heading west from Broad Street, owned by SEPTA, for possible future park development.

A concept plan for the below-grade City Branch was completed in 2013 by landscape architects and architects from Olin Studio and Bohlin Cywinski Jackson under the direction of the Community Design Collaborative and Friends of the Rail Park, the group whose members have been advocating for the park for over a decade. 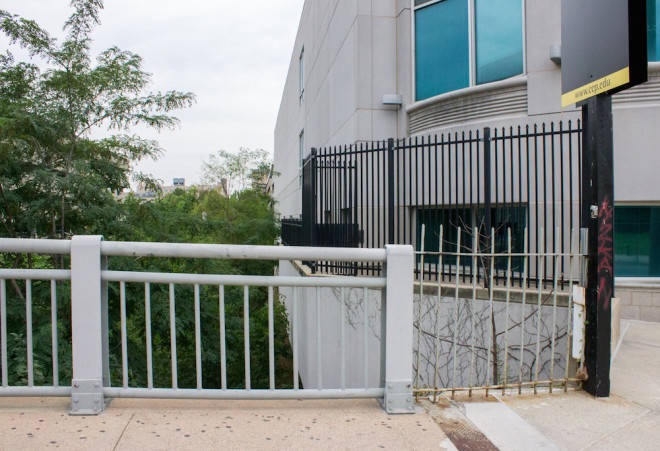 Not-so-public green space at the Center for Business and Technology | Photo: Michael Bixler

Excitement for phase one, of course, leads to speculation about what the rest of the three-mile park might mean for Philadelphia. The below-grade rail bed that extends west from Broad Street, parallel to Callowhill Street beyond the Rodin Museum, was part of the City Branch railroad, one of the oldest in the nation. This section, euphemistically referred to as “the Cut,” is currently overgrown with vegetation, is a repository for trash, and is home to intermittent underground parking lots. Its reutilization as a public park and urban green space means more than just beautifying the city; it would also become a pedestrian and bicycle thoroughfare traversing neighborhoods and important cultural institutions.

Michael Garden, a realtor and board member of the Friends of the Rail Park, believes the City Branch expansion has the potential to act as a conduit by which people can experience many of Philadelphia’s valuable commodities. “The proposed site is a powerful pathway of connectivity to and from numerous educational and cultural institutions (PMA, Rodin, Barnes, Free Library, CCP, etc.),” he told me, “and would enhance educational and cultural opportunities for all Philadelphians.” Essentially, the below grade park—itself a potential destination—would act as an access point for key institutions along its corridor.

One such institution, the Community College of Philadelphia—where I teach—may reap benefits beyond the traditional joys of simple urban green space. According to CCP’s website, there were over 34,000 students enrolled for credit and non-credit, part-time and full-time, in the 2013-2014 academic year, giving CCP one of the largest student bodies in the city. Furthermore, CCP enrolls many “non-traditional” students: under-represented student populations who are often the first of their family to matriculate into college. Unlike the various universities in the city, however, CCP does not have a large outdoor green space on campus to accommodate its large student body.

What at first may seem an inconsequential reality, studies show that green space on campuses contributes to academic achievement. “Findings indicated that within the overall sample of undergraduate students, those who used the campus green spaces more frequently rated their overall quality of life higher when compared with students who used the campus green spaces and the arboretum less frequently,” reads a study for the American Society for Horticulture Science. “These students rated their ability and challenge to apply knowledge learned in the university as higher when compared with low-users of campus green spaces.”

The mission of community colleges to extend higher education to populations that have typically lacked access to it makes them a viable proponent to any civic community. Nearly all of the students at CCP are from Philly and a great majority of them will end up living and working in the city upon graduation. This means that as a cultural institution, CCP acts to offer education, and thus, economic opportunity to traditionally underrepresented student populations. If it is true that green spaces on college campuses benefit the scholarship of students then the viaduct’s western expansion could have residual effects in bolstering Philadelphia’s academic and economic viability. My classrooms typically house students with diverse ages, backgrounds, races, and experiences; for many of them, CCP is an institution that promises intellectual and economic advancements beyond what education has previously offered them. The campus acts as a central meeting point for these diverse voices and seconds as a refuge for some students who do not have comfortable or safe living conditions at home. If the campus were to feature more areas of repose, it could further function as an intellectual center that welcomes its student body.

CCP’s campus does have a small courtyard and students frequent the nearby Matthias Baldwin Park, but neither space has the capacity to provide a serene distance from tumultuous reality the way a campus green would.

Developing the City Branch as a park would remedy this. The City Branch of the Reading Viaduct cuts, for two blocks, directly through CCP’s campus. If converted into a public green space, it could provide the much needed scholastic atmosphere for the city’s only community college. Students and faculty could meet between classes under tree canopies and lounge on benches while studying. Part of the park’s preexisting structure could even add a small amphitheater where classes and performances would be held outside. 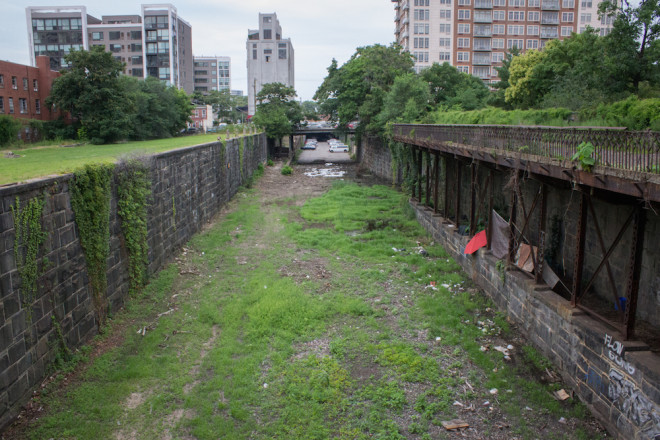 Potential for public use is no clearer than from the view looking west on 18th Street | Photo: Michael Bixler

Deidre Garrity-Benjamin, assistant professor and program coordinator of the Geographic Information System program, believes the proposed park could offer pragmatic teaching and learning opportunities for students. Her courses, she says, “cover urban ecosystems where we discuss how open space and green spaces should be incorporated into cities for numerous reasons such as helping surface water runoff, green transportation, and curbing the heat island effect. Being able to show students real life examples such as this project would be invaluable.” For CCP students, the proposed park would be a vibrant retreat from the busy urban campus while also learning in the field.

A relationship between CCP and Friends of the Rail Park would also prove mutually beneficial in gaining momentum for funding for the park. “Support from CCP will not only be vital to the completion of the project, but could also play an important role in expanding the support for the 3-mile vision,” says Michael Garden (CCP representatives did participate in the 2013 plan). Recognizing how the value of the viaduct’s conversion extends beyond revitalization is central to garnering public and political support for the project.

Green spaces have long been part of the architecture of college campuses. Likewise, parks have been crucial to urban design and development. This suggests the recognition that such outdoor spaces are conducive to pensiveness and serve as retreats from the beloved chaos of dense urban areas. They attract bird watchers, coffee-drinking bench warmers, exercise enthusiasts, fountain-hopping children, blog readers, picnickers, artists, and many other diverse idiosyncrasies that make up a city’s human identity.

There are, however, those who believe the City Branch would serve better as a conduit for a repurposed public transit link between Center City, the Art Museum, and Fairmount Park. (Read Hidden City Daily contributor Stephen Stofka’s call for a return to transportation use HERE.) In a city distinctly lacking in diverse rail service, the suggestion of a new transit line, linking portions of the city that are currently underserved, seems plausible. The infrastructure exists already. Segregated below grade, the City Branch does not directly interfere with the infrastructure of the city streets. The argument is that development of the rail would provide a readily viable and available addition to the city’s growing need for transportation. Supporters of the transit option romanticize European light rail systems, while hoping to fill an obvious void of easier access to places like the Art Museum and Fairmount Park. 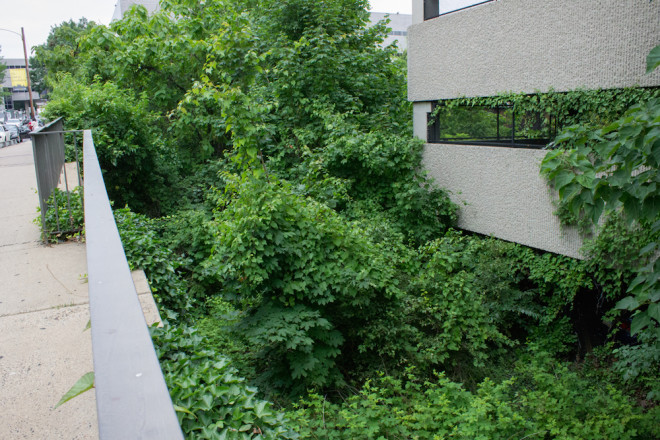 The debate seems to center around either a need for expanded transportation or a nod back to the turn-of-the-century’s City Beautiful movement–the advocacy for public spaces and the beautification of dense, industrial urban areas. Clearly, 21st century cities require both. Philadelphia’s growing population needs to get around with better ease. In considering the City Branch, the question becomes which option is more economically feasible, civically beneficial, and immediately relevant.

The circumstances of either project, however, are more profound than their visions. Current ownership of the Viaduct, questions of funding and sustainability, SEPTA’s long-term planning, concerns with safety, and a variety of other tangential issues beleaguer and delay both the park and transit concepts. Regardless of the final plan, a reuse of the City Branch constitutes the sort of imaginative thinking that exemplifies Philadelphia’s commitment to reconstructive urban planning.

The development of the Rail Park is not just a trendy attempt to be more “green” but could impact a multitude of neighborhoods in nuanced ways. Like the rails themselves, the neighborhoods bolstering and furrowing the tracks are remnants of a time when space in Philadelphia was reserved for the production and shipment of goods. That time, now long gone, remains in the weird dirty beauty that puzzles and intrigues both locals and visitors to Philadelphia. The elevated viaduct, constructed of massive stone and metal, lords over Spring Garden Street in grand decline. Perhaps, eventually, those stones and that metal can represent how Philadelphia accepts its history as it examines the needs of future residents. Like Eastern State Penitentiary, or the old high pressure pumping station along the Delaware, or the banks of the Schuylkill, the viaduct can become another example about how history—all history—is as important to Philadelphia as the cement of its streets, the rails of its tracks, or the grass of its parks.