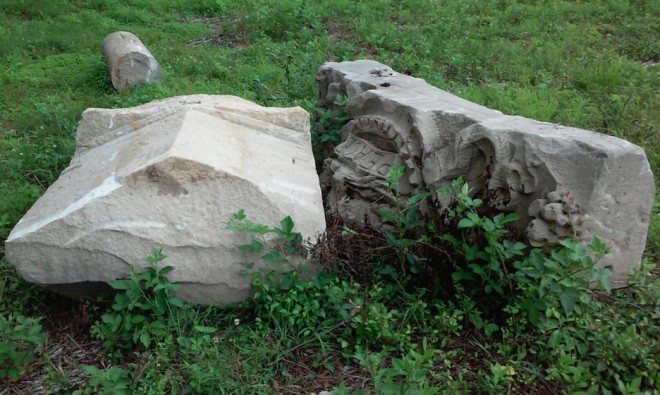 After numerous strolls around Ambler Arboretum on Temple University’s Ambler Campus I finally decided to get a closer look at a pile of stone rubble and columns piled up about seven yards off of the road. Making my way through the bramble, milkweed, and wild roses that always obscured the pile, I got close and was greeted by the smiling face of a cherub carved into a large and very heavy piece of stone lying on its side. In the background to the left of the cherub was what appeared to be a steeple. The overall look of the keystone was Gothic, and I surmised that it had come from a church. There was too much brush overgrowing the rest of the pile for me to get behind it, so I quickly took a picture with my phone and went on my way.

From then on whenever I ambled around the arboretum I would routinely pass the pile and wonder about it. Then came one day in late winter of 2014. It was perhaps my first walk of the year there, and once I got to the spot where the cherub lay I noticed that the ground was fairly clear as the brush had died down in the cold weather. I was finally able to safely inspect the pile and, eureka, there was more detailing. This time in the form of what looked like a lintel surmounted by a lion and a lamb over a banner emblazoned with the word “PEACE.” I snapped a photo of the upside down carving. My intrigue swelled. Where did these stones come from and why were they in Ambler?

The Life and Death of Park Avenue Methodist Episcopal Church 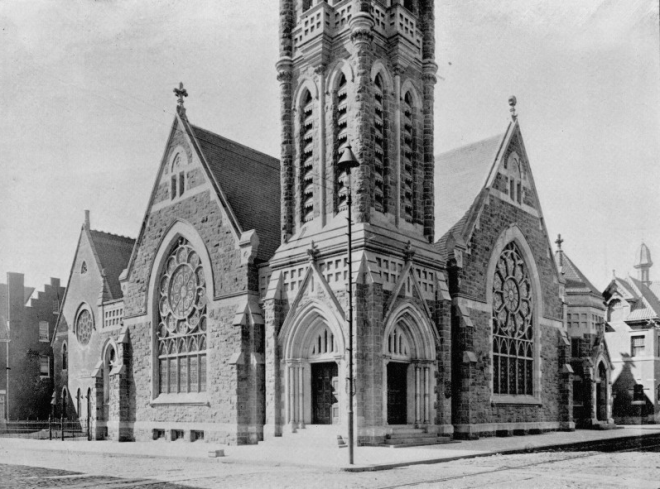 Park Avenue Methodist Episcopal Church in 1894. The Sunday School, where these fragments of the double arch were from, was built in 1900 | Courtesy of PAB Collection, Athenaeum of Philadelphia

I discovered that the pile of architectural remnants was once part of the Park Avenue Methodist Episcopal Church on Temple University’s main campus. The church was formed in 1873 with its first building constructed that year near the southwest corner of Park Avenue (now Liacouras Walk) and Norris Street. The noted Philadelphia architectural firm of Hazelhurst & Huckel put up a new church for the growing congregation in 1888, just north of the original, which was used as a chapel until it was replaced with a Sunday school building in 1900. Just about a century later, in 1998, the university demolished the church buildings.

A document in the Temple University archives describes the 1900 building as “a picturesque union of auditorium and Sunday School building, which has some of the varied form and angularity of the Victorian Gothic style, here expressed in rock-faced Trenton brownstone trimmed in Euclid sandstone.”

In 1941 the church’s congregation disbanded and Temple University acquired the structure the following year for the use of its Theology School and named it Thatcher Hall in honor of the late Dr. William D. Thatcher, the first student of Temple College who had gone on to become a Methodist minister.

The building was rededicated as Thomas Hall in 1947 in memory of the parents of prominent Philadelphia business figure and Temple benefactor, Morgan H. Thomas. The studios of Temple University Radio station, WRTI, occupied the basement of Thomas Hall from the station’s launching in 1948 until 1968. 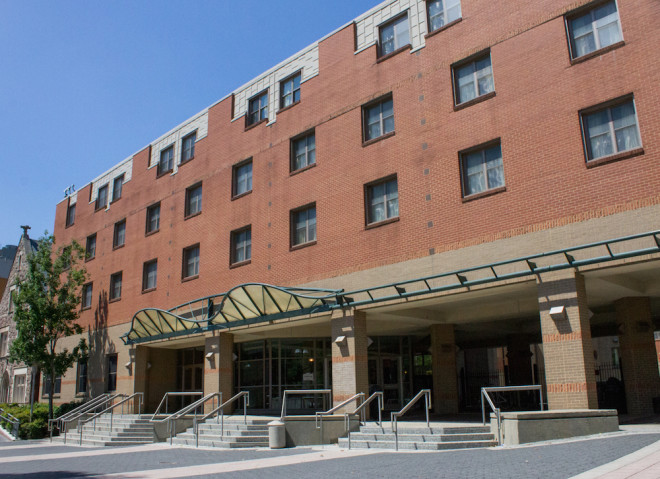 The Temple University School of Theology closed in 1960 and Thomas Hall was then occupied by the independently administered Conwell School of Theology until 1969 when the auditorium and Sunday School building were taken over by the university for performing arts education as well as administrative offices. It was used in this capacity for almost 30 years.

In a major push to modernize the campus in the late 1990s, Temple petitioned the Philadelphia Historical Commission for permission to raze both Thomas Hall and Baptist Temple. In June, 1998, the Commission voted seven to two to permit the university to demolish Thomas Hall; the Baptist Temple, however, had to be saved. In 2008, the university announced plans for a $29 million renovation and in 2011, it reopened as the Temple Performing Arts Center (the Preservation Alliance for Greater Philadelphia awarded it the Grand Jury Preservation Achievement Award in 2011). Despite the protests of some preservationists and former occupants of Thomas Hall, notably many former WRTI radio employees, Park Avenue Methodist Episcopal Church was demolished in summer 1998 to make way for the student housing complex simply named “1940” (Read about Temple University’s history of demolition HERE).

“The Ambler Campus has long been a kind of bulk storage site for various items too large or awkward to be stored on Main Campus,” says former Temple Ambler Campus dean Dr. James W. Hilty. Apparently so, though storing architectural artifacts in some bushes on the side of a road seems a little unorthodox.

The university carefully removed and saved all of the stained glass and the double arch from the church’s Sunday School section–added to the main sanctuary in 1900–which was later to be incorporated into a university garden for decoration. Plans for reuse of the arch never transpired. 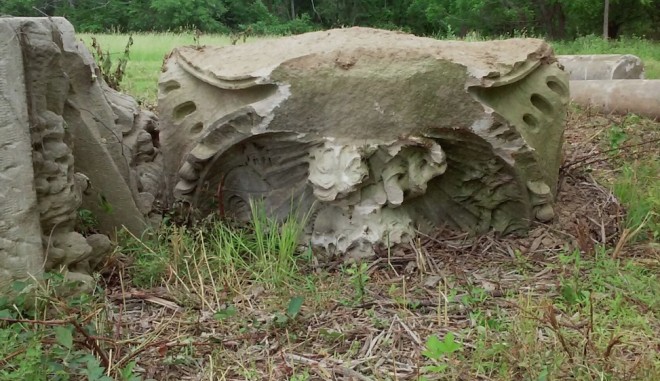 Several stone columns, which appear to be part of the saved Sunday School doorway arch, are scattered near the carved fragments in Ambler, but given their size they were most likely more decorative than structural. Measurements of all the fragments indicate that the whole archway would have stood approximately 15’ high x 7’ wide. There would have been one 10’ x 17′ round column on each side with a smaller 10’ x 11.25′ column in the center.

Clearly the stonework’s removal to the Ambler campus was well intentioned, but since there was no plan or follow through, the stones have remained forgotten for the past 17 years.

So, what happened to the plans for the arch’s reuse in a garden? And also, what happened to all that stored stained glass? No one seems to know. According to John Hughes, a retired Temple Ambler staff member, the warehouse on the Temple main campus where the windows would have been kept is itself no longer standing.

Salvaging History In The Absence Of Salvation

In past decade, dozens of churches of various denominations have closed and many of them have been razed, a trend that is only gaining momentum as the city’s building boom rumbles onward. The question remains, aside from pressing for preservation, what to do? Saving sculptures, architectural elements, built-in pieces of furniture, light fixtures, or whole room interiors–anything that might represent the touch of a master artist or craftsman’s hand–is difficult work that requires planning and coordination, neither, apparently, that Temple University, in this case possessed. While the market for architectural salvage is strong, it can’t account for religious Philadelphia’s vast material artifacts. 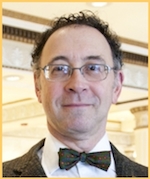 Larry Arrigale Lawrence M. Arrigale is co-author (with Thomas H. Keels) of Philadelphia’s Golden Age of Retail, (Arcadia Publishing, 2012), a richly illustrated history of the city’s department and specialty stores. Lawrence has been in the antiques business for over twenty years, and has worked as an appraiser of personal property since 1999.