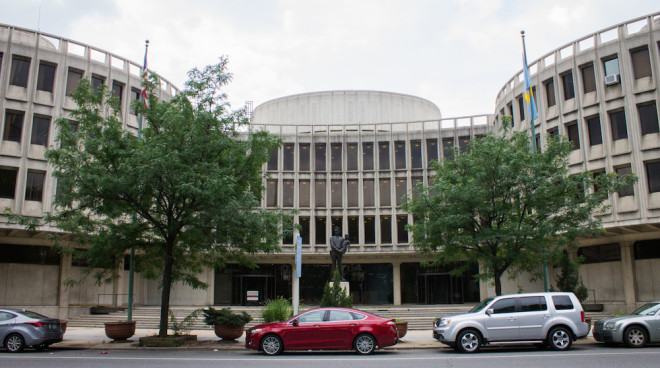 The Police Administration Building at 700 Race Street will be vacated when the police administrative offices move into the 87-year-old Provident Mutual Life Insurance Company in West Philadelphia, a $250 million renovation project slated for completion in 2018. The striking four story wave of curvilinear concrete that resembles a giant pair of handcuffs–nicknamed the “Roundhouse”–was constructed in 1963 with designs by Geddes, Brecher, Qualls, and Cunningham. It was built with pre-cast, pre-stressed concrete panels that employ a unique vibration system for the pouring of a dry concrete mixture invented by the Dutch company Schokbeton.

Repurposing the Roundhouse into a small hotel or apartment building might be a no-brainer. The building’s close vicinity to the the Benjamin Franklin Bridge, the surrounding view of Franklin Square, the seemingly endless grid of unobstructed windows providing natural light, and the immediate proximity of both Chinatown and Old City all make living or lodging very attractive for reuse, or for demolition and new construction (despite the building’s iconic shape and role in the city’s history, it isn’t listed on the Philadelphia Register of Historic Places and therefore protected from demolition). However, we decided to go in an entirely different direction and wanted to extend the building’s life of serving the public, particularly with the city’s young in mind. We propose renovating the cylinder closest to Franklin Square into office suites for youth outreach, counseling, and educational services and outfitting the opposing cylinder into a community center. 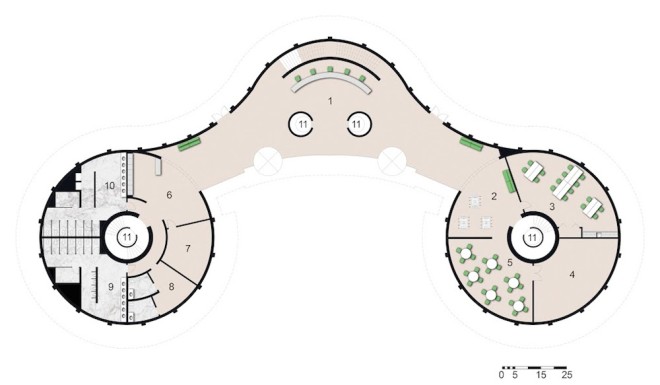 Upon entry, the public will encounter an information desk and either be directed upstairs to one of the social services office suites or toward the entrance of the community center. A new staircase would be built behind the information desk which would hug the curvature of the southern end of the structure. This is the only new mode of vertical circulation that we added and felt that the existing elevators and circular staircases throughout the Roundhouse were suitable.

The building’s fenestration is abundant and attractive, so we felt it crucial to take advantage of the windows. However, at ground level the windows are clerestory, offering a bit of natural light, but no access to views. Therefore, we decided to place as many ancillary spaces as possible on this floor. 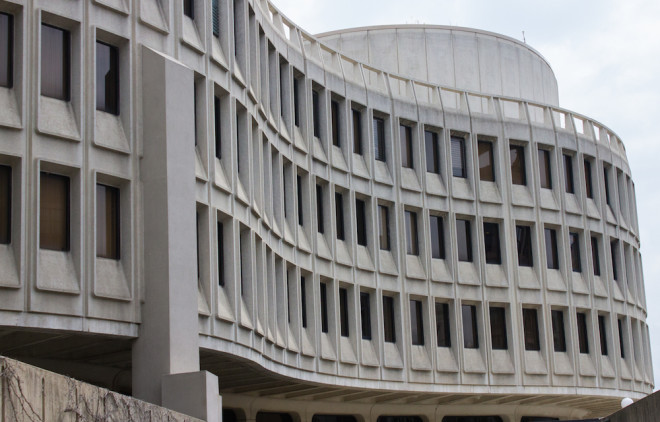 The core of the first level would mostly serve as circulation, but it could also be used as a reception space for fundraising events and performances. The west cylinder would feature overflow restrooms and space for coat storage in the cooler months. The east cylinder would feature space for storage as well as open spaces for tabletop games like chess and bingo, game tables, and a classroom, which will have a storage closet and a sink to accommodate needs for arts and crafts activities. 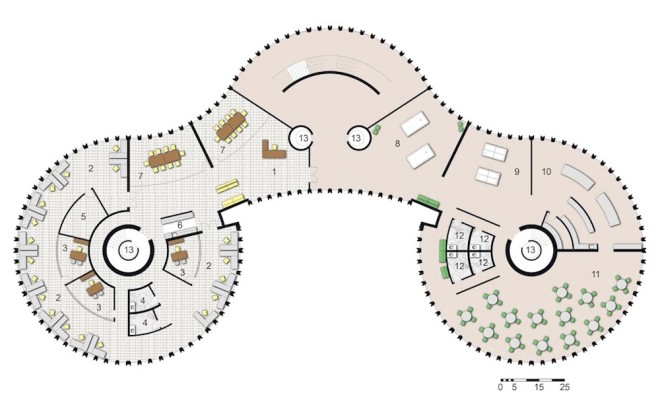 The footprint of the levels above the ground floor are slightly larger, although the geometry of the floor plan is roughly the same. The interior layout of the west cylinder is repeated from the second level tup through the fourth level. Only employees that work in the office suites will be allowed security access to utilize these elevators from the ground level.

Each office will have open workspace with views to the outside where possible. The private administrative offices will have floor-to-ceiling glass on one side–to borrow light and views–and two conference rooms. Amenities will include a storage room, kitchenette, and two private bathrooms. Guests would enter through double doors directly into the reception area from the new main stair or existing elevators at the core of the building.

The community center section of this level is immediately accessible off of the main stairwell and core elevators. There would be two game table spaces, a cafeteria complete with a kitchen prep area, and a dedicated space for food storage. Off of the cafeteria will be a lunchroom which may be used by anyone in the community center or offices. This space could also double as a large communal space at other times for meetings or activities. The east cylinder also has four private restrooms consistent on each floor above as well. 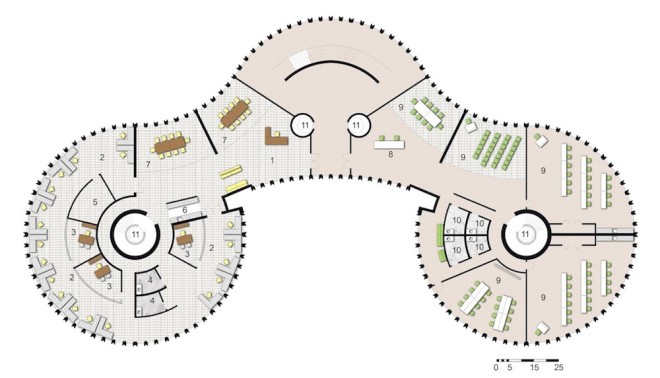 The third and fourth levels of this multi-use building will be essentially identical. To the east, the community center section at the third and fourth levels is a bit more private. Upon entering double doors off of the main circulation there is an information desk. There are two meeting rooms adjacent to the information desk with views to the south. These rooms could also be utilized as classrooms for continuing education courses and job training. To the east are more classrooms with large tables. The furniture in this room would be flexible–stackable chairs and folding tables to allow for multipurpose space. Some of the rooms also have sinks with some cabinetry and a small storage closet. 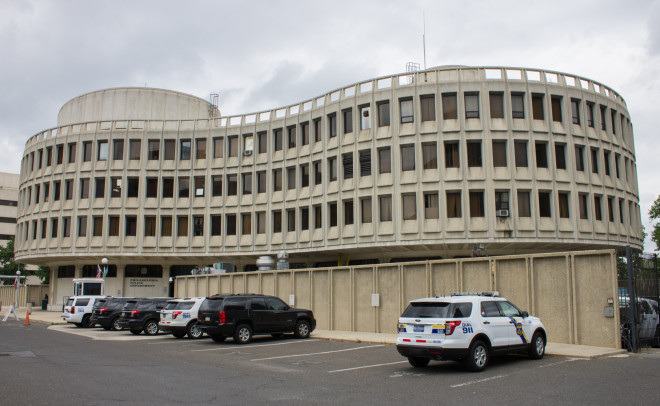 To make the exterior more inviting we propose removing the building’s surrounding concrete walls that are almost as tall as the first level, which has a ceiling height that is over 15 feet. The removal of the wall would offer a pleasant visual transition from Franklin Square and would be replaced with outdoor tables and benches in some areas. The existing parking lot could remain, but perhaps this land could be sold for private development in order to facilitate the redevelopment of the Roundhouse.