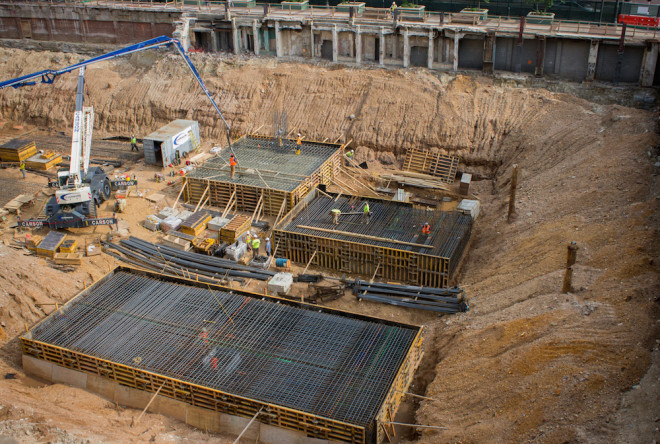 On Monday a fleet of 35 trucks poured 350 cubic yards of concrete into what will be the deepest footings of the sub basement of the East Market project, officially giving life to National Real Estate Development’s $260 million first phase of redevelopment on the site at 12th and Market Streets. The massive hole left after demolition of Girard Square and the remaining five floors of the former Snellenburg & Company department store, which we stalked around as demolition was in progress in February, will be filled with a 17 story, 322 unit residential tower designed by BLT Architects with 130,000 square feet of retail and restaurant space as well as underground parking. Work on the tower’s steel beams will begin over the next few weeks with construction rising out of the hole in September. The first 100 apartments are slated to be completed by summer of 2016. The third floor of the tower will feature a green commons deck.

Chestnut Walk, a mid-block esplanade inspired by neighborhood shopping districts, will eventually snake its way through the development from Market to Ludlow to Clover and onto Chestnut Street. A second tower at 12th and Market is planned for the project’s second phase, which may be fitted for a hotel with retail space at ground level. 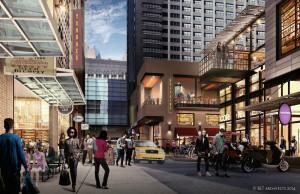 With East Market, lonely Ludlow Street will be reopened for traffic and reactivated with retail and restaurants | Rendering: BLT Architects

Also on National Real Estate Development’s plate is the former Family Court Building at 34 South 11th Street. Mom’s Organic Market signed a lease on the bottom floor in January with plans to fill the 16,000 square foot space by late spring of 2016. The rest of the building is being renovated for modern, warehouse-style offices that with feature exposed ductwork and mushroom columns, large, open floor plates, and floor-to-ceiling windows. Daniel Killinger, managing director of National Real Estate Development, says that the design will be a “Class A, modern warehouse office space” that will “lend itself to a very collaborative work environment, which you just can’t find anywhere else in Center City.” Killinger says his firm currently has prospective tenants interested in every space. The building’s exterior will be covered in what appears to be a shimmering, chrome-like skin. Renovations are slated for completion by summer 2016.

Here was the view behind the gates and into the colossal hole at East Market’s concrete foundation pouring and a peek inside the former Family Court building pre-renovation. 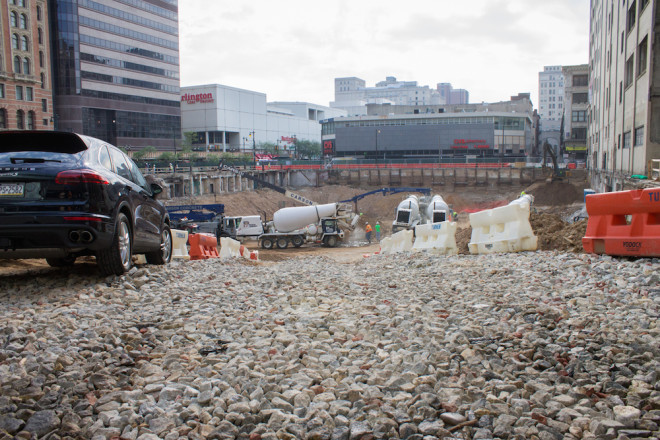 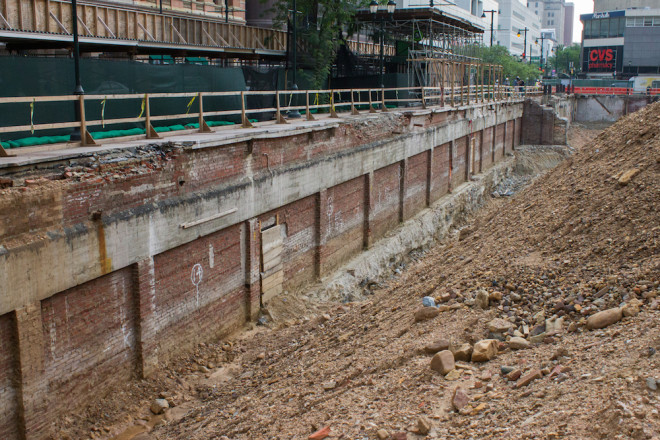 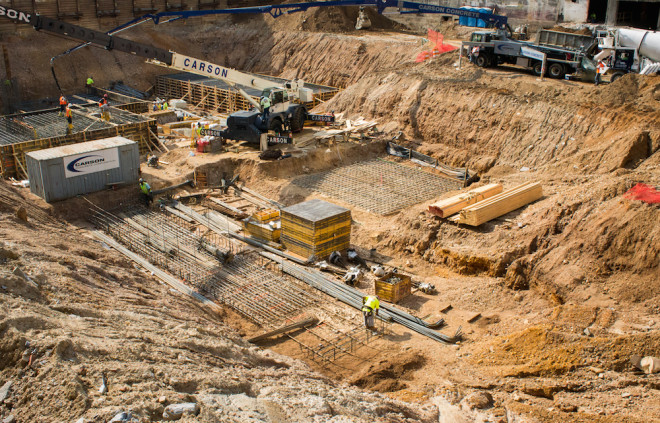 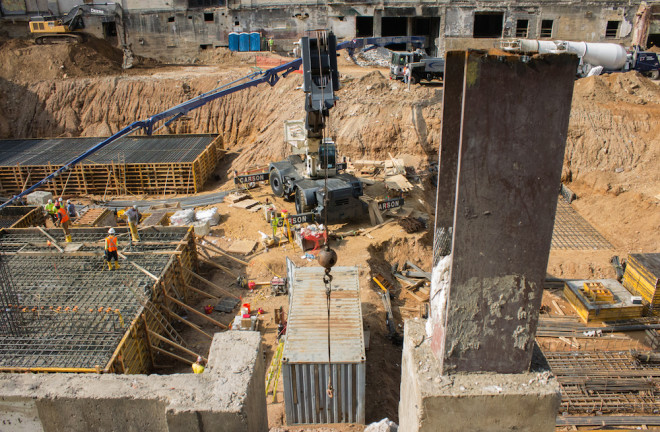 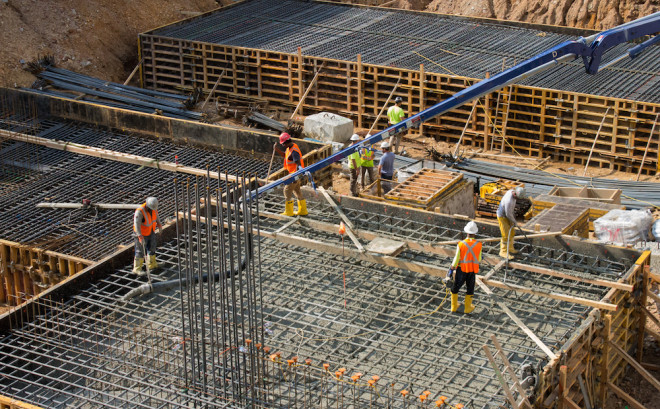 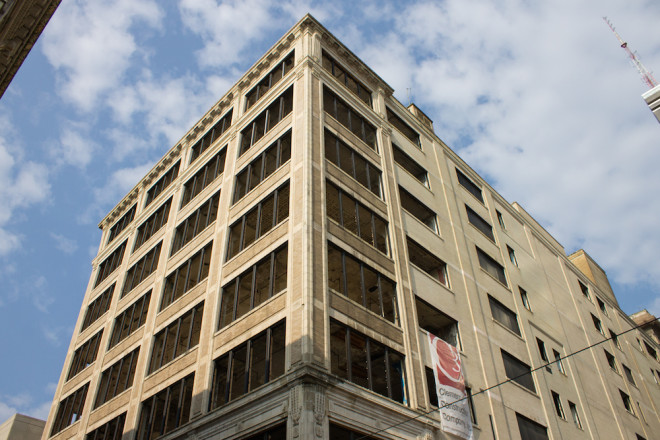 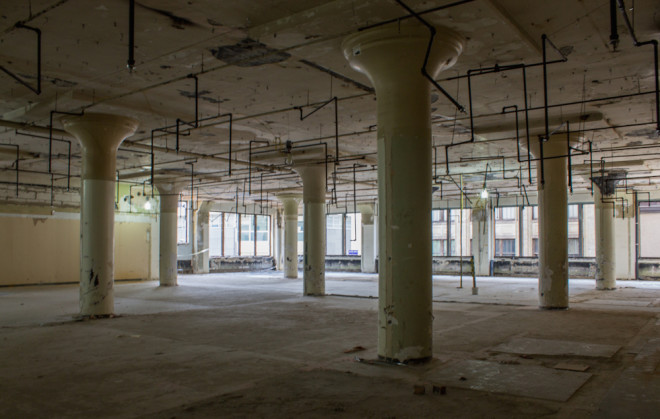 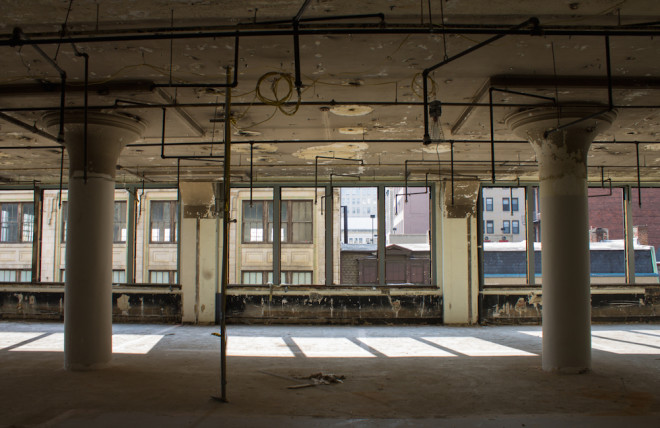 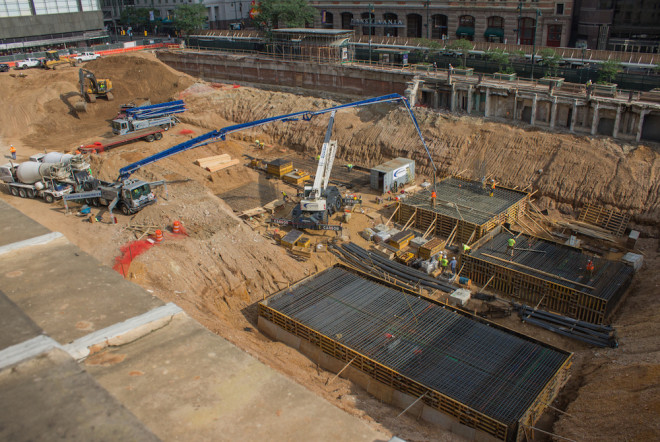