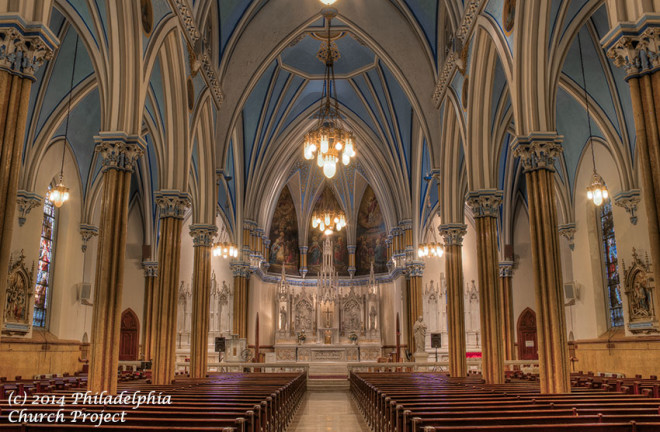 Editor’s Note: The time to document the city’s dwindling neighborhood churches is now. The number of historic, sacred places demolished in the last decade is staggering and, as the building boom continues at full speed, the trend appears to be unrelenting. With the recent destruction of Pilgrim Congregational in Fishtown for new townhouses, the deconsecrating of Incarnation of Our Lord in Olney earlier this month, and the heated struggle of parishioners to keep St. Laurentius Catholic Church from being razed, cataloging what we still have left is imperative. The Philadelphia Church Project has been quietly stepping in to do just that over the last eight years with an ever-growing online resource for history, analysis, and commentary about the city’s many sacred spaces. Founded by church enthusiast Patrick Hildebrandt, the website features 108 houses of worship presently surveyed. The database project is a veritable go-to guide for the cultural and historical backstories of active, closed, and razed churches, while also providing an intimate look inside sanctuaries through photography.

MB: How did you first get started on the Philadelphia Church Project? What was your motivation?

PH: It was a visit to Our Lady of Hope (formerly Holy Child) in Logan. It was my grandmother’s parish growing up, but I had never been inside until I went on a spur-of-the-moment trip in February 2007. I was inspired not just by the amazing structure itself, but by the passion and persistence of a parish that tried to carry on and make things joyous and inspirational despite not having an awful lot. I realized that their story was probably not atypical, and that a lot of amazing churches were soldiering on in the same kind of anonymity. So, I just starting visiting as many other churches as I could and seeing if I could bring some of those stories to light. Over eight years later, here we are.

The Project’s evolution hasn’t exactly been a straight line, but we’ve grown into a mix of advocate, catalog, and chronicle. For obvious reasons the cataloging has become increasingly important as of late. 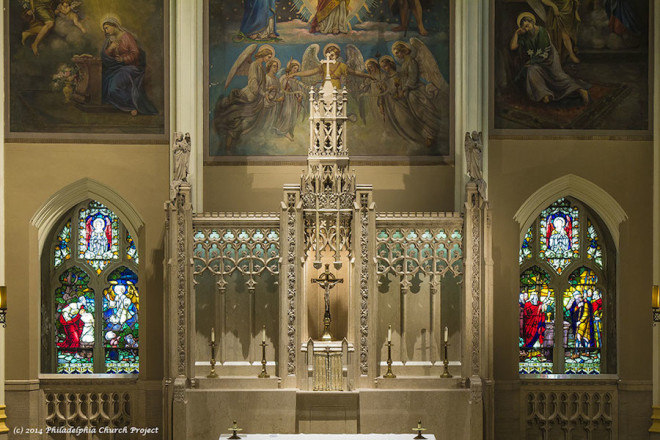 MB: The Archdiocese just desacralized the Incarnation of Our Lord a few weeks ago. The old “profane, but not sordid” routine. Not anything new but, from your observation, is the closing and deconsecrating of Catholic churches in the city escalating, and is it a result of dwindling neighborhood parishioners or is the Archdiocese doing a bit more financial house cleaning lately?

PH: It’s both, really. The demographic and population shifts over the last half-century can’t be discounted. Families are smaller and more scattered, and we’re well past the point where you need a church on every corner in North Philadelphia the way you once did. That said, it’s also clear that decades of financial irresponsibility have caught up to the Archdiocese, and they’re trying everything (and anything) to balance the books, even if it comes at the expense of the faithful, which it is.

PH: That refers to a mini-wave of closures that happened in 2013, claiming the aforementioned Incarnation of Our Lord, along with St. Benedict, St. Laurentius, All Saints and others. I had hoped to come up with a cooler name, but I just started using that one as a placeholder and it stuck. Oh well, they can’t all be the “North Philadelphia Swath of Destruction”.

MB: The “Church Project Theorem Guide” is fascinating. Explain the guide a little more and how you pull it all together.

PH: The guide speaks to greater trends or common attributes among churches, whether in a certain geography or across the whole city. For example, what are closings? What are consolidations? What’s an upper church, as opposed to a lower church? What happens when a church is sold? Why does Allegheny Avenue in Port Richmond have three churches in a seven-block radius? The theorem guide connects the dots in a way that helps you see the big picture of our religious institutions, instead of focusing on one particular parish. It also provides a kind of shorthand, so I can quickly and easily refer to something we’ve seen a dozen times before.

The theorems are based mainly on my observations and experiences. Every time I saw one of these trends, I created a theorem to describe it (and gave it a cheeky name to make it stick). There are actually 25 of them in all, which still kind of amazes me. 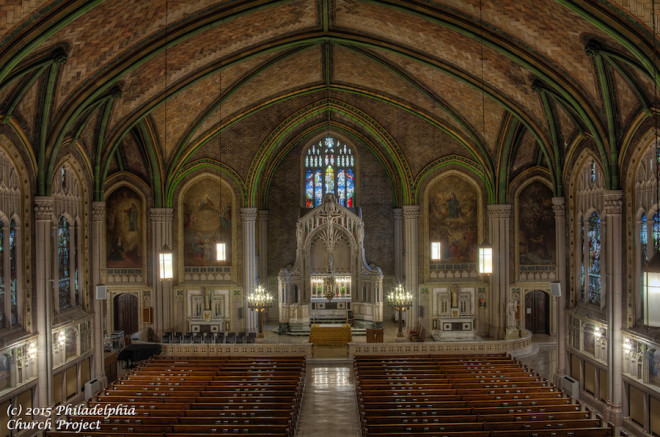 MB: I understand you dislike when churches move their alter out of the nave. How often have you observed this phenomenon?

PH: More often than I would like. Vatican II may be many things, but the havoc it inspired some parishes to wreak on their interiors is one of the worst aspects of it. There’s no justification, in my mind, for the desecration of these priceless interiors. There are some real horror stories in this city, but even the small changes add up. In many churches, even if they keep the altar where it’s supposed to be, they still remove the altar rail anyway. Some churches get it, and don’t needlessly futz with their interiors, but not nearly as many as I would like.

MB: You don’t claim to be an “architectural, sociological or historical expert,” though your site manages to be this really handy encyclopedia of sorts for the city’s sacred places. As a one-man project, how have you managed to both acquire and sustain providing such indispensable information?

PH: Not easily, I grant you. It feels like I’ve already spent a lifetime traveling, writing and photographing all over this city. The Project has been a true labor of love, built upon a lot of observation and experience, as well as my own knowledge as a native Philadelphian. Though, a great deal has also come from other people–parishioners or priests I meet on trips, or readers who send me old stories, photos and historical materials. The sad fact is our churches are not well chronicled, even by the parishes themselves, so many people are grateful to have some sort of repository. We would not have nearly the resources we do if not for our amazing following. As far as encyclopedias go, we’re far from complete, but it’s better than nothing. And, as you say, I am only one person.

MB: Explain the criteria of your rather off-color “Hot Girl | Fat Girl” principle.

PH: Off-color indeed. The Project has matured a great bit over the past eight years, and this is probably the sort of thing I wouldn’t dream of coming up with today. But it has a special place in my heart, not only as the very first theorem we coined, but as a nice reminder of our more exuberant days. But to answer the question, it’s pretty simple: Are they happy to see you? It’s the latter. Are they cold or hostile to your presence? Then it’s the former. You wouldn’t think any church would be hostile to visitors, but, as I’ve learned, there’s a lot about this city’s churches that can surprise you. 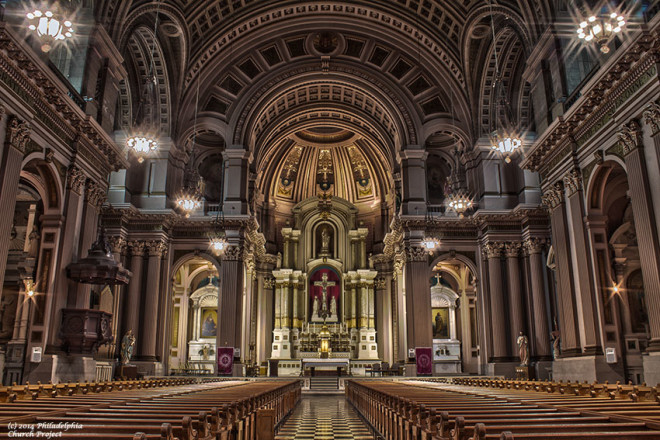 MB: Historically ethnic communities suffer serious cultural identity loss when iconic, neighborhood churches are closed and leveled. A good, proactive example of pushing back against this trend are the supporters of The Friends of St. Laurentius, who are fighting for the life of the church as we speak. After a designation recommendation for the Philadelphia Historic Register from the Architectural Committee earlier this month it appears that they may have a decent shot at saving the church when it goes before the full Historical Commission in July. From your eight years covering the church beat, how common is this type of community action and how does geography influence parish involvement in grassroots campaigns. Are the odds more in favor of a closed and threatened church in Fishtown than, say, one in Olney?

PH: Not very common, sadly. The St. Laurentius crowd may be the most determined and galvanized group I’ve encountered in my eight years on this beat. It’s tough to rally that kind of support. The parishes that are closing tend to be ones with smaller populations and with fewer resources to mount any sort of a campaign. I think it’s less about rich or poor, though, than simply having a good nucleus of people willing to fight. Fishtown has never been seen as a symbol of wealth and prosperity, you know? But, boy, do they live and breathe St. Laurentius. Also, it was a Polish national parish, and those sort of historically ethnic churches often connect with their populace in a way that the standard territorial ones don’t.

I think there is also a sort of malaise, a common feeling that you can’t “fight the power” that is the Archdiocese, because they are so “top-down” authoritative, and they don’t listen to you. They don’t explain decisions, they don’t allow alternate plans, and they don’t take second-guessing well. What they say goes, so most people probably find it easier to walk away than to try and stand up. I don’t blame them, honestly. Closings are tough, and it’s easy to get discouraged with the size and scope of them. It can feel like an endless onslaught of decay, especially if you’re one of the unlucky ones who has been through a couple of closings already.

Will St. Laurentius succeed? They’d be the first, honestly, to successfully stick their thumb in the Archdiocese’s eye. I hope they do, not just because the church is drop-dead gorgeous, but because I think the Catholic population needs to see a grassroots success. They need to know that their voices will be heard, that their passions can and do matter. Otherwise, what’s the point of any of this? Why give your heart to any religious institution if it won’t matter in the end? If anybody can pull it off, it’s St. Laurentius. They fought successfully to keep their school open a few years back against long odds. But the deck is still stacked against them. How sad is it that the Archdiocese is fighting tooth and nail to demolish a church, while its parishioners are fighting and fundraising so passionately to save it? St. John Neumann is probably spinning in his grave right now.

MB: Are you a churchgoer yourself?

PH: “There are more things in heaven and earth, Horatio, than are dreamt of in your philosophy.”