Redevelopment Plans For The Royal Theater Go Under Review 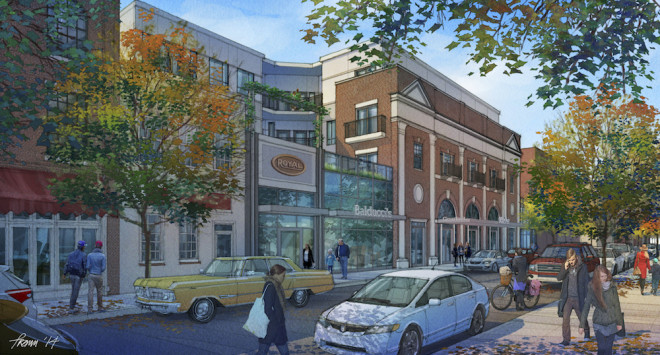 Face value only. The Royal Theater’s proposed façadectomy echoes the fate of the Boyd’s Art Deco auditorium that is currently being demolished | Rendering: Dranoff Properties

The long, troubled path to bring the Royal Theater on South Street back to life over the last decade may soon come to a quiet end. On Tuesday, June 23rd the Architectural Committee of the Philadelphia Historical Commission will officially review redevelopment plans presented by Universal Community Homes and Dranoff Properties—a mixed-use proposal that includes razing the historic, African American venue and retaining only the Classical Revival façade. Universal and Dranoff seeks recommendation approval from the Committee to develop 1520-1536 South Street with 40 luxury residential units and 7,000 square feet of commercial space. A below-grade garage on Kater Street for 20 parking spaces also are included in the plan designed by the firm JD Davis Architects.

One of many divergent proposals by Universal since they purchased the building and adjoining parcels from the Preservation Alliance of Greater Philadelphia in 2000 for $250,000, this most recent iteration was rejected by the Historical Commission in 2013 due to an incomplete application. The theater, designed by the prolific Philadelphia architect Frank E. Hahn, is currently listed on both the Philadelphia Register (1976) and National Register of Historic Places (1980). Universal will seek to circumvent the legal protections of the local register at the Committee on Financial Hardship meeting on June 30th. The architectural and planning firm Vitetta was contracted by the company in 2006 to assess the cost of full rehabilitation. The firm’s determination was the prohibitive and wide-ranging figure of $8 to $18 million.

The Royal was one of ten sites featured in 2009 in the inaugural Hidden City Festival.

The Preservation Alliance for Greater Philadelphia currently holds an easement on the north façade of the Royal Theater, a stipulation included in the 2000 sale to Universal Companies founder and chairman Kenny Gamble, who originally envisioned a bright revival for building with the return of live entertainment. Despite receiving a $50,000 Keystone Historic Preservation Grant for exterior repairs from the Pennsylvania Historical And Museum Commission—whose approval must also be sought before any alterations are made–and a $2.25 million grant from the Redevelopment Assistance Capital Program of Pennsylvania, Gamble’s plans to return the theater to its former glory as a performing arts space–and a host of other proposals, including the relocation of the Rhythm & Blues Foundation from New York City to South Street–never materialized.

Now, Universal is seeking to move forward with demolishing the theater for new development, while, under contract, preserving its iconic façade. “The Royal is a tough one, honestly. It’s in such a poor condition and is perhaps an indictment of the past 45 years of neglect more than anything else,” says Patrick Grossi, director of advocacy of the Preservation Alliance. “It also raises the important question of what is worth preserving, especially when it is not economically viable to do so. In a resource-strapped city I think everyone can appreciate an appeal to pragmatism, but historic assets are not solely economic assets, though they often contribute economic value.”

Grossi says that the current plan for the façade put forth by Universal and Dranoff does satisfy the Preservation Alliance’s easement and that the restoration would be faithful to Hahn’s original 1919 elevation. New wood transoms, arches, windows, a restoration and refinishing of the historic railing, and new metal doors are all included in Universal and Dranoff’s preservation plan for the façade.

Creeping up behind and flanking both sides of the theater’s north-facing front would be a five story luxury apartment building dressed in stone veneer and cementitious paneling, spandral glass, steel and aluminum trellises, and glass railing. A residential entryway and commercial space would be added to the east side of the original façade and a service entry added to the west side. Steel gates would wrap the entrance and exit to the basement garage on Kater Street.

If Universal’s plans are recommended for approval by both the Architectural Committee and Financial Hardship Committee, they will still have to go before the full Commission, in addition to seeking approval from the Pennsylvania Historical and Museum Commission. The PHMC must be consulted by any leaseholder of the building until 2023 before alterations can be made due to a restrictive covenant included in Universal’s deed.

“The Commission has not yet made a decision concerning the developer’s proposal to raze the building. Given the sensitive nature of a proposal demolition of a National Register-listed property, we are considering the proposal very carefully,” says Karen Arnold, Keystone Grant manager of the PHMC’s Bureau for Historic Preservation.

“The PHMC decision will not impact the PHC decision generally and certainly not impact the decision on Tuesday, when the Architectural Committee will consider the application, and will primarily address the architectural aspects of the rehabilitation of the front façade and new construction,” says Farnham.

The Royal Theater was built in 1919 by Abraham Wax with the designs of Hahn, architect of the Warwick Hotel and the Gershman Y. Considered a center of the city’s African American community during the 1920s-1950s, the theater was shuttered in 1970 due a shrinking audience and to make way for the Crosstown Expressway that never transpired. The Royal was the city’s first and largest movie theater to cater exclusively to the African American community. The 1,125-seat venue also hosted live performances by iconic performers like Bessie Smith, Fats Waller, and Cab Calloway, along with children’s talent shows and radio broadcasts.

Universal Companies and Dranoff Properties will present their plans for the Royal Theater to Philadelphia Historical Commission’s Architecture Committee on Tuesday, June 23rd at 9AM in Room 578 of City Hall.