Pearl Properties Goes Back Before The Historical Commission With Boyd Revisions 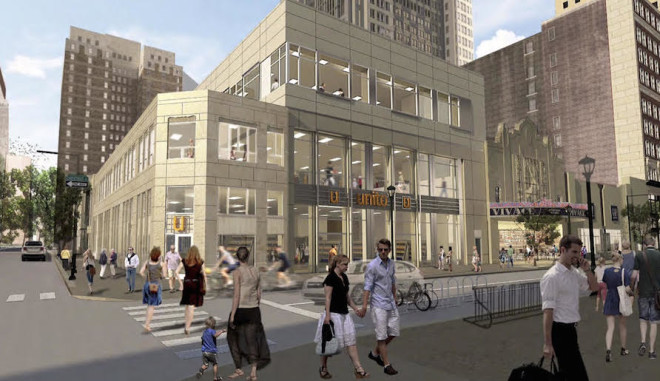 On Friday, Pearl Properties brings its revised plans for the 1900 block of Chestnut Street, including the remains of the Boyd Theater, to the full Historical Commission. The initial design for the project was unanimously rejected by the Historical Commission’s Architecture Committee on May 26th, due largely to the lackluster proposal by Eimer Design for a 26-story apartment tower that will replace the Boyd Theater’s now demolished art deco auditorium. The committee initially recommend approving the plans, with stipulations regarding restoration of the Boyd Theater’s façade and lobby, but ultimately voted against what they viewed as a hasty, incomplete design. As Jared Brey of PlanPhilly reported, Pearl’s presentation did not include a concise picture of what building materials would be used, nor did it explain how the tower’s base would interface with the Boyd’s façade. Dominique Hawkins, the committee’s chair, summarized the shoddy proposition when she remarked that the loading dock on Samson Street was “an incredible afterthought.” Inga Saffron, in her incisive review for the Inquirer, drove the point home when she opined that the tower’s plans looked like a “charmless, bulky stack of rentable units.” Hidden City contributor Stephen Stofka viewed Pearl’s initial plans as inherently flawed due to a lack of vision for the high profile corner, providing a design that squanders density with “underscale urbanism.” 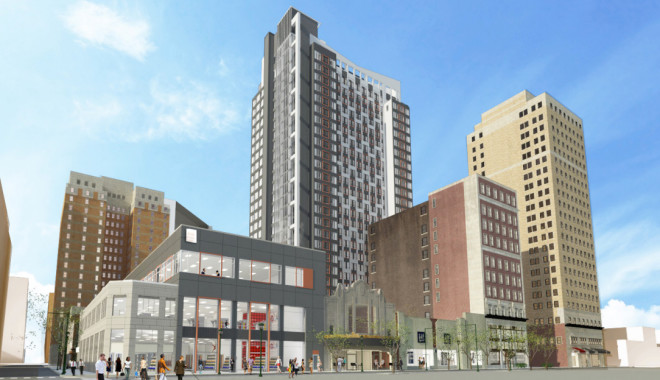 The revised plans lifts the Boyd’s façade out of the tower’s shadow a bit more with the return of the theater’s Art Deco glass, giving the remnents of Center City’s last movie palace more pronounced street level consideration than initially proposed. The marquee and theater lighting restoration are also included in their plans, which you can view HERE. However, the theater’s former courtyard will remain closed off and the foyer on Sansom Street is still slated for a loading dock and area for dumpsters.

Safety through simplicity appears to be the theme for the residential tower’s façade with mute, beige earth colors of “Oyster,” “Zinc,” and “Castle Grey” playing off of both the Boyd’s and Alexander Building’s limestone. The colors will interface with a grid of brushed stainless steel and flat dark gray aluminum window frames. Textured metal paneling will run the length of the tower facing Chestnut Street.

The Alexander Building will see some improvements and respectful changes. The stone façade will be repaired and a new window configuration on 19th Street will replicate the existing geometry.

Pearl Properties present its revised plans to the Philadelphia Historical Commission on Friday, June 12th at 9AM in Room 18-029 at 1515 Arch Street.