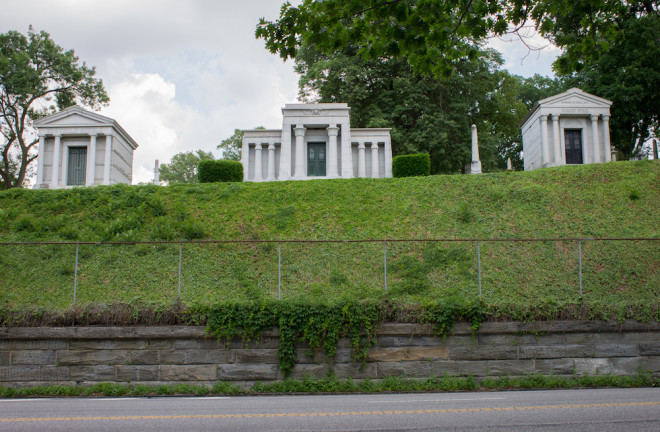 Entering Laurel Hill Cemetery from the Schuylkill River Trail is impossible unless you are adept at dodging speeding cars and scaling tall fences | Photo: Michael Bixler

Access to the beautiful vistas of Laurel Hill Cemetery by foot or bicycle from the Schyulkill River Trail is prohibitive and disappointing, though that is about to change. Construction has recently begun on a pedestrian entrance at Hunting Park Avenue and Kelly Drive that will open up the lush 78 acres of historic memorials and sweeping views of the Schuylkill River to the 2,800 runners, cyclists, and walkers that use the path daily. The entrance, slated for completion in July, will finally connect the verdant National Historic Landmark to the city’s expanding network of easily accessible public green space.

“Laurel Hill has been undergoing a renaissance with increased participation by the public in programs and tours, as well as general use of the site for educational and recreational activities,” says Amanda Dean, director of development and membership of Laurel Hill Cemetery. “The new pedestrian entrance will serve as a gateway or ‘bridge’ for patrons to access Laurel Hill Cemetery from the Schuylkill River Trail.” The transformative project will conversely connect neighboring residents of Allegheny and Hunting Park Avenues to the trail through the burial garden’s grounds.

Dean says that the addition of the Kelly Drive entrance is part of a renewed investment in public use of the cemetery. “We are going back to our roots in an expansive way,” she says. When Laurel Hill was established in 1836–the second preeminent rural cemetery in the country–use of the pastoral grounds for leisure activities like picnicking and socializing was very popular. Approximately 30,000 people visited the cemetery yearly in the mid-1800s. 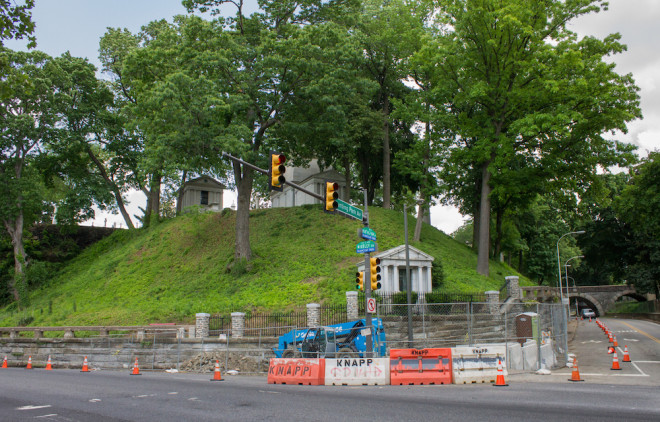 A new gateway in the works. Currently, one has to walk or bike over a mile down the trail into East Falls and onto Ridge Avenue to reach Laurel Hill’s gatehouse | Photo: Michael Bixler

Founded by Quaker and librarian John Jay Smith, the cemetery was established after a mourning Smith failed to find his daughter’s grave due to overcrowding in the city’s swollen churchyards. Along with partners Frederick Brown, Benjamin W. Richards, and Nathan Dunn, Smith set out to create a serene, scenic rural burial ground that held no religious affiliation. Laurel Hill was meant to be far from development pressure that was transforming the city and forcing the disinterment of Philadelphia’s existing church cemeteries. Designed by John Notman, the architect responsible for St. Mark’s Church on Locust Street and Church of the Holy Trinity in Rittenhouse Square, Laurel Hill was conceived as an estate garden. Visitors would take steamboats to the cemetery grounds from the city to spend leisurely afternoons among the mausoleums and evergreens while looking out from dramatic heights onto the lolling Schuylkill River. After disembarking across the street from where the new entrance is being built—an old stone stairway access point on the river’s shoreline remains today–visitors would either walk or take a horse-drawn carriage up to the cemetery’s entrance on Hunting Park Avenue.

Although Laurel Hill is still an active cemetery, with 17 burials so far in 2015, the primary motivation behind building the new pedestrian entrance is easier access for public use and attracting visitors to Laurel Hill’s creative programming. “We are a garden for the dead and a playground for the living,” says Dean. “We want our visitors, members, friends and families to enjoy the grounds, the birds, the fox, the flowers and trees, the history, and the river views. We encourage people to bring their lawn chairs, and to have picnics and relax. We also have great vantage points to the river and the races and regattas that take place along Kelly Drive.” 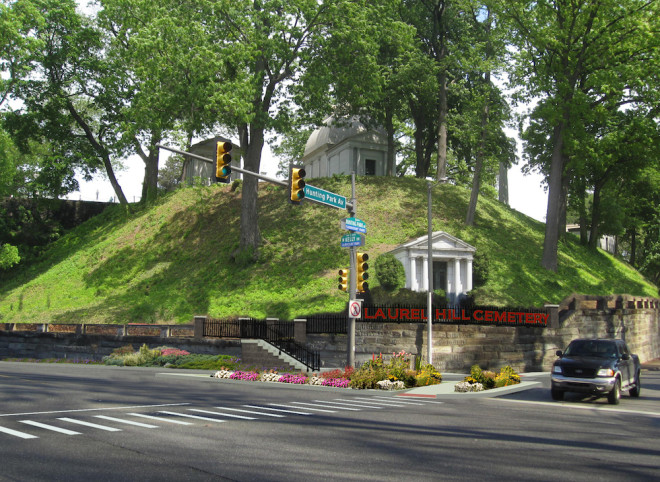 The new walkway, a collaboration with the Philadelphia Department of Parks and Recreation, is being installed just below the sloping hill of the 19th century burial garden’s central section. A long time coming, Dean says years have been spent on project feasibility studies, grant applications, and permit acquisition. Urban design firm KSK Planners Historians, Inc. and contractor Knapp Masonry plan to have the project complete in just under two months. Funding from the Pew Center for Arts & Heritage, the William Penn Foundation, the Pennsylvania Horticultural Society, and Bill and Laura Buck has helped see the project come to fruition.

The pedestrian walkway will also feature a bike rack at the entrance where Kelly Drive and Hunting Park Avenue intersect. An additional rack is located at the cemetery’s gatehouse on Ridge Avenue.

Laurel Hill Cemetery is open from 8AM to 4:30PM during the weekdays and from 9:30AM to 4:30PM on the weekends. For a list of upcoming events and public programming click HERE.