The Robinson Building at 1020 Market Street is an iconic example of Center City’s mid-century commercial hey day. Originally a budget women’s wear department store, it was built in 1946 from the designs of partnering architects Victor Gruen and Elise Krummeck. Gruen was a pioneer of modern retail architecture and is regarded as the father of the shopping mall. The building on Market Street is rumored to be the last one of the last of 11 Gruen-designed Grayson-Robinson stores still standing. Over the years various tenants have moved in and out of the street level suites. The building was recently purchased and the suites have since been vacated.

The Robinson Building has six levels total. The first level is below ground and the other five are above street level. The entire front façade of the building is windowless with the exception of the ground floor where clothing displays once enticed customers inside. The original looping 1940s neon signage that enlivened the now blank, unfurling façade has since been removed, though a vertical Robinson sign still hangs on the west wall. 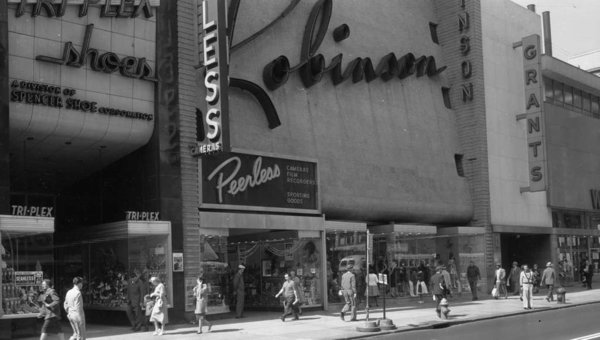 When exploring a potential use for the building, we were motivated to preserving the front façade, creating an exact replica of the original signage which had such an iconic presence during the department store’s tenure. However, this also required our schematic design to embrace the Market Street-facing elevation that has minimal fenestration. Inspired when it occurred to us that one building type that thrives on windowless spaces are movie theaters, we realized this building was destined to be a cinema.

In certain sections ceiling heights inside range from 10′-2′ to 15′-7′ tall. This would result in minimal floor level changes throughout the theater allowing enough headroom for moviegoers to move about the space freely. Therefore, we broke up the building’s floors and designed a series of small, intimate movie theaters with lounge-like seating to mimic a small gathering, a contrast to the huge crowds and large stadium-seating at modern multiplexes–documentaries in themselves are intimate by nature because they tell often follow specific, truth-revealing narratives. A movie theater here will enliven a long-underpopulated stretch of Market Street and align with both East Market and Gallery retail projects. Center City has comparatively few movie screens–an embarrassment for an otherwise healthy downtown. 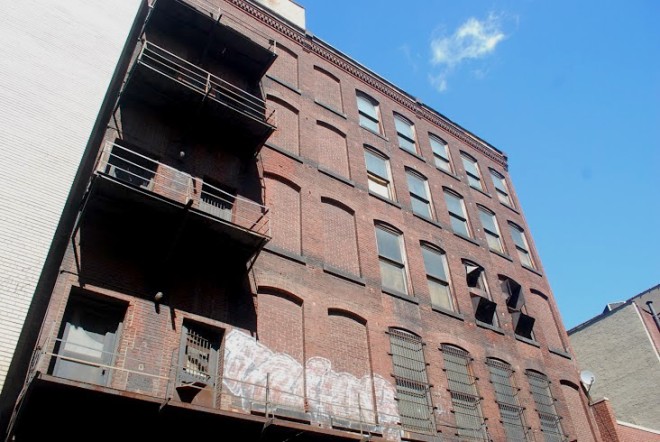 The basement level of the documentary theater complex would be privately used for office and studio space. Access would be provided by elevators and would be limited to tenants. Five offices would be created in total for creative, multimedia work, including one dedicated to out-of-town film crews in need of workspace on the fly. The floor plan would also include a conference room and a photography studio and interview room. The lower level would also feature a kitchenette. A small screening room would round out the underground floor that could be used for private showings and for directors to view their own work during film production.

At street level, glass cubes just adjacent to the buildings used to display clothing and other wares sold inside (these displays are still in use in some European cities). We would reinstall something similar, but make them easily removable to make way for flat site lines for special events. The main entryway would be a large open space with durable flooring such as terrazzo–shown in the floor plan below–that would be reminiscent of the experience of mid-century department stores. Four elevators would be directly accessible after purchasing a ticket. Emergency exits are present at the rear of the building on Ludlow Street, which we decided not to relocate as these will serve the lower and upper levels of the building and empty onto Ludlow Street.

The second and third floors are the central theater levels and would have identical floor plans. Restrooms on this floor are stacked on top of identical ones on the street level. Exiting the elevators, patrons have the option of turning right to a snack bar. The façade facing Ludlow Street has large windows in the same configuration on all levels above the basement floor. We felt the need to take advantage of these fenestrations and natural light by placing the most of the public space toward the back of the building. Some of the windows have been filled in with brick, which would removed.

The fourth level would be split between public and private spaces–the main offices at the front of the building and separated from the public space by a double door to maintain privacy while the adjacent movie theater is in use by patrons. Administrative offices would house the daily management of the documentary cinema facility which wold also include the planning of special events, including film festivals and film premiers. The restrooms and snack bar would be in the same location as the two levels below.

The fifth floor would be reserved for special film screenings and private events. A larger bar would go towards the front of the building in front of a large open space for either standing or temporary seating. The storage space on this floor will house tables and chairs. A coat room would be placed adjacent to the elevators. A small lounge located between the elevators and rear façade windows could add an intimate space for conversation during events.

Upon first glance, a building with an almost entirely windowless front facade is far from ideal. However, reusing the Robinson Building as a theater complex could restore some of the nighttime vibrancy of this particularly empty section of Center City. Not only would a documentary theater provide a more cultural and creative presence at 10th and Market, but it may help make the area feel a little safer by stimulating more commercial activity and foot traffic at night.