Lost Potential: Banking On A Better Future For PSFS Building 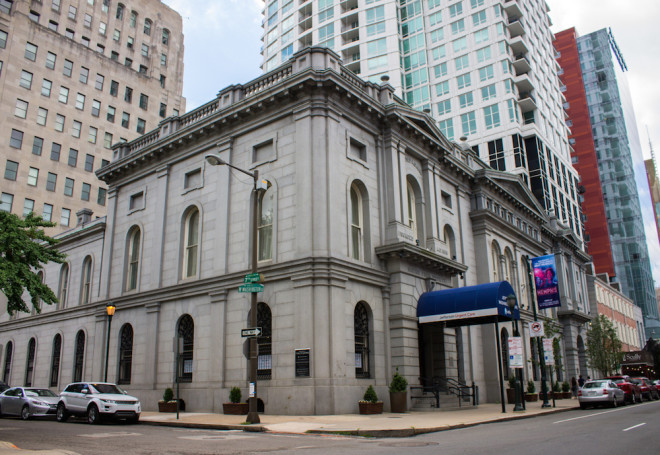 The Philadelphia Saving Fund Society at 7th and Walnut is a masterpiece of multiple additions | Photo: Michael Bixler

This month, Thomas Jefferson University opened an urgent care center inside the old Philadelphia Saving Fund Society headquarters at the northwest corner of Washington Square, turning it into a vastly different building than it’s ever been. While floundering between active tenants and vacancy since 1988, repurposing the bank into a medical center is a disappointing fate for a stately structure in so prominent a location, right on the park. Its grand interiors have since been covered over, and the liveliness that neighbors hoped a more creative reuse would bring to the street has since been stifled. Whether Jefferson is in the building to stay or just biding time while the University continues its “turf war” with Penn Medicine remains to be seen. What is certain is that the vitality of the block is weakened by this brand of institutional reuse. The former PSFS building is a city treasure ripe with possibilities and it deserves much more.

The Birth and Boom of a Bank 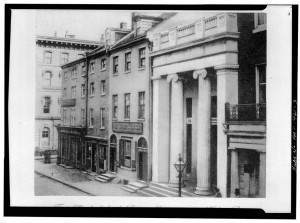 The Philadelphia Saving Fund Society was founded in 1816. The mutual savings approach was a new kind of banking concept in the United States: depositors owned the bank’s wealth and not stockholders. They called it a “society” not only to illustrate the concept, but because the bank’s founder, Condy Raguet, thought it would be more likely to get a charter from the state legislature with that name, which it did in 1819.

PSFS rose in popularity so quickly that the bank’s primary offices were forced to move multiple times into larger spaces in 1818, 1821, 1826, 1827, and 1833. The bank finally commissioned its own Thomas Ustick Walter-designed building in 1840. It still stands at 306 Walnut Street, complete with its white marble facade from Chester County quarries.

After thirty years, the Society had 25,000 depositors and held $6 million in cash inside its vault. The 1840 building proved way too small and was not considered fireproof or secure enough for the bank’s growing needs. Talk of either moving to a new building or expanding the current one began in 1864 and dragged on for a few years. The Society went so far as buying adjoining properties that faced Third Street in preparation for an expansion. Then, in October 1866, the Randall Mansion, a.k.a. 1 York Row came up for sale. The 60-year-old house on the southwest corner of Walnut Street and West Washington Square capped the historic row of early, speculative houses. Not wanting to pass on the potential to move operations to such a high-profile corner, the board of the Society immediately voted to make Washington Square the bank’s new home. By the following May, the bank owned both the Randall Mansion and the Walnut Mansion next door.

In February 1868, an Italianate Palladian design by esteemed Philadelphia architects Samuel Sloan and Addison Hutton was approved for the bank’s new headquarters. In June, PSFS held a large ceremony to lay the cornerstone for the new building. In addition to speeches by Society president Caleb Cope and Philadelphia Mayor Morton McMichael, a lead time capsule containing newspapers, photographs, and other documents, was placed inside the cornerstone by Charles Bancker, the last surviving founder of the bank. 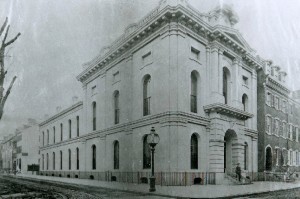 The new Philadelphia Savings Fund Society headquarters branch officially opened for business on October 11th, 1869. The new building had a small front section that faced Walnut Street and extended south only four-fifths down the block on West Washington Square. However, Society board members demanded that the new building be constructed so that it could be easily enlarged.

And expand they did. In 1882, the Society purchased the house next door at 704 Walnut Street and proceeded with a small addition designed by Addison Hutton that also included an extension of the rear of the building all the way to Goodwater Alley (now St. James Street). By the time the project was complete in September 1886, the Society had purchased 706 Walnut. By the end of 1896, 708 and 710 Walnut had been also purchased. Furness, Evans, & Company was commissioned for a design of the next expansion phase. The façade of the new addition was a mirror image of Hutton’s design from 20 years earlier. A slight color difference can still be seen between the two halves, though a nearly identical Quincy granite was used. The addition that further stretched the bank’s façade down Walnut Street opened on November 1st, 1898. In all, the Society wiped out five of the once-grand houses on York Row with its expansion. Arguably, they replaced it with something even more impressive that, in later decades, would contribute architecturally to Philadelphia in other ways.

Between 1925 and 1927, PSFS, as the company was now called, commissioned the firm of Mellor, Meigs, and Howe to alter and modernize some of the interior of the structure. Bank leaders used the same firm to build the nearly identical branch buildings in South Philadelphia, Logan, and West Philadelphia during the same period. In 1929, when the bank was ready to move its headquarters to what would be Philadelphia’s most iconic 20th century building at 12 South 12th Street, designed by Howe & Lescaze (a firm that George Howe had splintered from Mellor and Meigs for a short-lived partnership with William Lescaze), the bank also commissioned the architects to alter the interior of the old headquarters one last time, calling for a complete excavation of the rear courtyard between the rear wings for the construction of an underground vault. For the next five decades thereafter, the former PSFS headquarters on Walnut Street became just another branch. Any alterations made after 1940 were carried out by the Architecture Unit of the Real Estate Department of the bank. 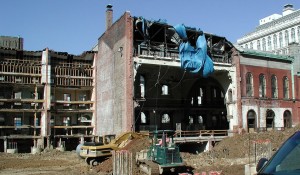 On January 1, 1988, now under the name Meritor Financial Group, the branch moved to the new Walnut Towers parking garage on the next block (back when it had no towers) and the PSFS building was sold to the real estate speculator Sam Rappaport, who had also managed to acquire what remained of York Row. The next year, Rappaport announced that the old bank would become the elegant new headquarters of his real estate empire. He would move his offices to the second floor of the building and built a 30′ by 100′ ballroom with a glass dome on the roof that set far back enough not to be visible from the street. The first floor was to be rented to a bank. Many presumed it would be the financial institution Rappaport was trying to acquire at the time, the Home Unity Saving & Loan Association. The York Row houses were to be renovated and leased, with one put aside for Rappaport himself. The $5 million proposal was to be completed by the end of 1990.

Despite getting preliminary approval by the Historical Commission and engaging Dagit-Saylor Architects for a design, the old PSFS headquarters and York Row suffered the same fate as many of Rappaport’s other properties–sitting empty, unused, and abused, for years. 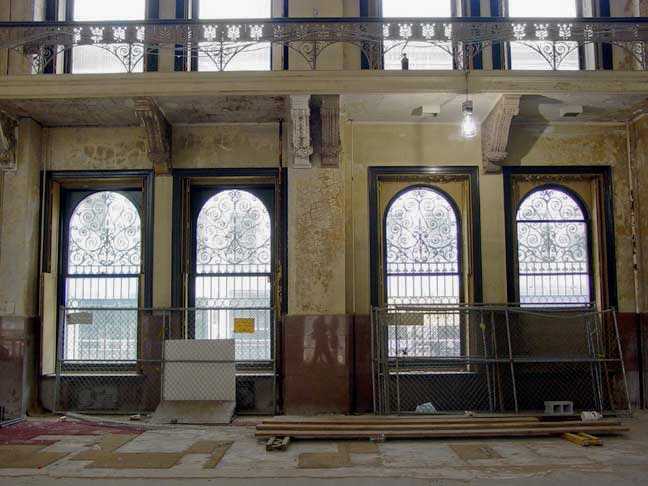 After Rappaport died in 1994, the potential to save the old PSFS headquarters whetted the appetites of developers, neighborhood residents, and preservationists alike. In January 1995, P & A Associates announced plans to develop a mixed-use apartment tower at the corner of St. James and 8th Streets that would reuse the bank, but eliminate York Row, much to the chagrin of the public. That February, the real-estate firm agreed to preserve the York Row façades; the houses themselves had been gutted years earlier. The portion of the Furness & Evans designed wing of the bank that reach St. James Street would be eliminated. The Society’s old headquarters was slated to become offices and a large restaurant space, though the firm had trouble generating investors and the project stalled.

In early 1999, developer Barton Group of Chicago announced that it was under agreement to develop a similar project on the site. P & A Associates scrambled to get funding and partnered with real estate firm Boston Financial Group to buy out Barton’s interest in the site. 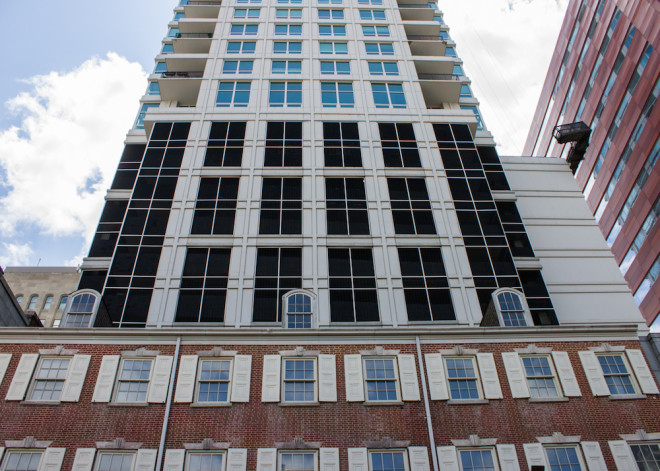 The bank and York Row sat empty for a few more years while P & A made more partnerships, agreements, and sought tax breaks to expand the project and get it started. After some final approvals and revisions in early 2001, ground broke in November on the new tower project, planned to be the tallest residential building in the city. By February, 2002, demolition of the York Row houses was compete, leaving 15-foot-deep shells behind. The rear section of the Furness & Evans west wing was gone soon thereafter.

The 45-story St. James was completed and ready for occupants at the end of March, 2004. P & A Associates and partners sold the residential tower one year later with only 45 percent of the apartment units occupied. The restaurant space in the old PSFS headquarters wasn’t faring much better. It wasn’t until late 2006 that the Minneapolis-based chain Oceanaire opened a 300-seat restaurant on the old banking floor. Oceanaire closed in 2009 and was soon replaced by the second location of Bala Cynwyd-based Chops Restaurant and Bar. Once Chops closed both locations in the middle of 2013 and moved to the Comcast Center, hopes were high that the third time would be a charm for the restaurant space that couldn’t quite find success. 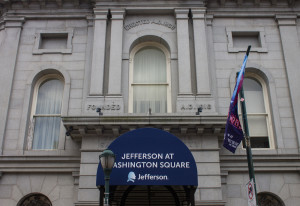 At the same time, Penn Medicine Washington Square, Pennsylvania Hospital’s new main outpatient center, had just been completed a block away at 8th and Walnut Streets. Some blame this facility and Penn Medicine’s general encroachment into Jefferson University Hospital’s Washington Square West territory for what would happen next. Jefferson signed a lease on the former banking floor and restaurant space in March, 2014, and very quickly constructed a two-floor urgent care facility inside. Jefferson at Washington Square’s conversion completely covers up what was left of the interior design of the old PSFS headquarters and seems like a very odd use for such an esteemed space. The hospital’s bright blue signage and awnings represent bring corporate medicine to a place of leisure and pleasure.

In theory, Jefferson administrators could have put an urgent care facility anywhere or at least within buildings they already own and lease, including the 135,000 square foot Robert Morris Building at 919 Walnut Street the University purchased in January 2013. Only two months after leasing this space, the University also bought 900 Chestnut Street, where its real estate department had proposed building a similar facility in 2011. Will that one still be built? If so, will they vacate the old PSFS, or continue to occupy it as part of a “turf war” with Penn Medicine?

Hopefully this doesn’t end up being the final use for this great, potential-rich building. Perhaps another restaurant or even retail space will one day reactivate the old banking floor and bring the old PSFS headquarters back to its former glory.