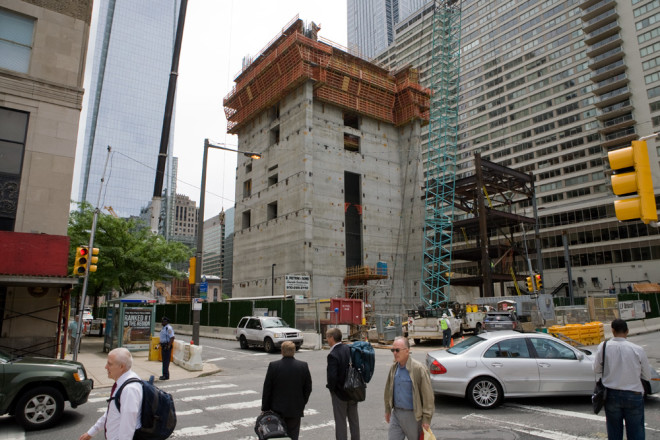 At last night’s ceremony honoring his work, one of the world’s foremost architects spent the better part of an hour discussing his influences and peloton—the colleagues, collaborators, and patrons that form the iceberg to his tip. Norman Foster, Baron Foster of Thames Bank, spoke to a packed house at the Penn Museum as the Philadelphia Center for Architecture (CFA) and AIA Philadelphia presented him with the 2015 Louis I. Kahn Memorial Award. Foster, who turned 80 last week, won the award for his firm’s design of the Comcast Innovation & Technology Center (CITC), currently under construction on the 1800 block of Arch Street.

“I think it would be true to say that we are all products of influences,” Lord Foster said, acknowledging an underlying fact in a profession driven by mighty egos. “Individuals, places, objects, memories, conscious, subconscious—[influence is] the lifeblood of architecture and design.”

With a story of his first visit to Philadelphia in winter of 1961, when he was studying for his Master’s at Yale, Foster told of meeting Kahn and touring his buildings—and discovering the influence upon Kahn. “I owe a great debt to Louis Kahn—he was and still is a powerful influence. [But] he was also subject to powerful influences, namely Buckminster Fuller,” he said while referencing Fuller’s office on Market Street. Foster related Fuller’s tetrahedral and geometric principles to Kahn’s famous unbuilt City Tower, which he then displayed side by side with Foster’s own Hearst Tower, which opened in New York in 2006. 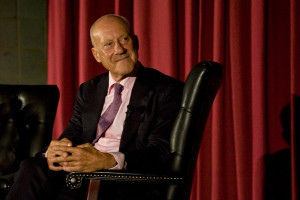 In addition to Kahn, Foster cited Paul Rudolph, the architect and Chair of Yale’s architecture department during Foster’s time, and Vincent Scully, the critic and fellow lecturer at Yale who proved pivotal in the rise of Kahn’s and Robert Venturi’s careers. In 1962, a year before he loudly decried the demolition of New York’s Penn Station, Scully called Kahn’s Richards Medical Research Laboratories at Penn “one of the greatest buildings of modern times.”

One need not strain terribly to see the form of the shafts in Kahn’s Richards Lab echoed in the exterior-mounted elevator shafts of Foster’s CITC. The elevators, sure to both thrill and terrify, will climb skyward over 19th Street toward the Four Seasons hotel, which will occupy the top 12 floors of the tower when it opens in 2017. (Incidentally, it was announced just yesterday that The Logan, a Philadelphia-specific Hilton brand, will replace the Four Seasons’ vacated space on Logan Square and open this fall.)

While he tipped his cap to predecessors, Foster also shared a large body of his firm’s work, illustrating a process that draws from many sources, including a love of aviation and its wide-openness and relationship with nature and light. With a body of work that includes the Swiss Re headquarters in London (“The Gherkin”), the enormous Beijing airport, the tallest bridge in the world, France’s Millau Viaduct, and the new “spaceship” headquarters for Apple under construction in Cupertino, two of Foster’s projects cast a line that can be seen through CITC: the reconstruction of Berlin’s Reichstag, and the seminal HSBC Main Building in Hong Kong.

In 1990, East and West Germany officially reunited in a ceremony at the Reichstag, the parliamentary building left in ruin since World War II air raids. Its central cupola was badly damaged and subsequently demolished. In replacing it, Foster created a dome that recalled the original cupola that opened views across the Reichstag (including Soviet graffiti left during the war), and provided a publicly accessible space at its top, with a 360º view of the complex and city. More importantly, and more than a decade in advance of a more commonplace movement, Foster’s team strove to create a sustainable building, maximizing natural light and lowering its carbon footprint, while helping to “lift the burden of history,” as he described it. 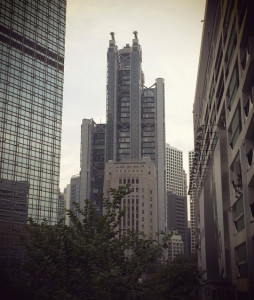 In the HSBC building, Foster turned skyscraper construction inside-out and was at the front of a wave that transformed Hong Kong into one of the world’s preeminent skylines. “HSBC,” he explained, is “an expression of structure as a way of giving order to the building.” Its exoskeleton clearly reveals the tower’s makeup. Removing the building’s central core in favor of smaller elements along the sides of the building opened up the floors to become free and flexible. “This had enormous social benefits as well as commercial benefits, and incidentally had great views across and through,” he said. At the ground level, HSBC is a “response to the pedestrian network,” an elevated entrance that allows sightlines through the building and makes crucial connections to public transit.

These themes—openness, natural light, sustainability, street life, connections to transit, connections to the past—manifest into a cohesive unit at CITC, employing as much of Foster’s innovation & technology as that of Comcast, whose researchers and product developers will occupy the building’s vertical campus. A proper gentleman—he’s the fifth-ranking member of the British Monarchy’s Order of Merit—and in spite of his firm’s reputation for high-tech design, Foster stated with deference that technology is nothing new and that “it brought us out of the caves.”

Nevertheless, contemporary technology drives CITC, which has the goal of achieving LEED Platinum certification, the highest distinction awarded by the US Green Building Council. The existing Comcast Center, with which CITC dialogues through a visual axis and a similar roof height (the building’s 1,121-foot height is measured to the top of its spire), earned LEED Gold.

Foster described his first visit to the site, walking with Liberty Property Trust’s John Gattuso from Rittenhouse Square: “Walking from a place full of life and activity, as we got nearer [to 18th and Arch] it became bleak. I said ‘it’s really important that we bring the sidewalk to life, that there is life at the public level, not just to connect to the subway below.'” However, that subway connection could very well prove the main catalyst toward activating the otherwise quiet zone.

Described as an “urban room,” the extension of the Suburban Station concourse (which like its predecessor begot significant state and local grant money) will open up from the underground into a large, spacious room with a central water feature with retail and social spaces that aim to enliven the gap between Rittenhouse Square and the Ben Franklin Parkway, the city’s social and cultural centers. And while the tower will front along 19th Street, the urban room’s connections to the concourse and Comcast Center will meet via a lower building along 18th Street, which itself takes cues from Philadelphia’s industrial past, namely the streamliner train cars built by the Budd Company at its Red Lion plant in Northeast Philadelphia. 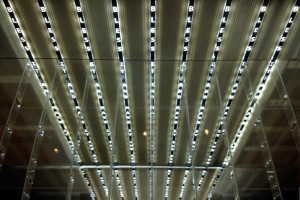 “Bless it and make it the seed of the nation”: William Penn quote on the ceiling of CITC’s public space | Photo of CITC model: Bradley Maule

Though the building will undeniably be populated by well-paid employees of the city’s most profitable corporation, Foster’s team intentionally created an inclusive design, between the subtle nods to Philadelphia (Kahn and Budd), the urban room open to everyone, and the publicly accessible Four Seasons hotel and lounge, which will provide views even higher than the One Liberty observation deck set to open later this year. And if the models at the Center for Architecture are any indication, the nod to Philadelphia could be even more direct.

William Penn, whose tiny sculpture placed atop Comcast Center in an attempt to atone for One Liberty’s gall to eclipse the original atop City Hall (and which may or may not have had a hand in the Phillies’ World Series title the same year, ending the city’s championship drought and the Curse of Billy Penn), predicted big things for Philadelphia, his “Holy Experiment”—that God would “bless it and make it the seed of the nation.” Look closely and you will find that quote repeated on the urban room’s ceiling.

The urban room model is one of several that are part of Designing Our Skyline, an exhibit CFA and AIA Philadelphia are hosting in conjunction with the Kahn Memorial Award. The exhibit follows the design process of CITC through sketches, renderings, and models provided by Foster + Partners and Liberty Property Trust. The exhibition is free, open seven days a week, and runs through July 29. For more details, see HERE.

In a final nod to the future by way of the past, Foster spoke fondly of “very fashionable” Philadelphia architect Wilson Eyre and the Penn Museum he designed. With a slide previewing a work in progress projected behind him, Foster drew on the museum’s rotunda, its circular forms crafting the starting point for the design of the next phase of the University of Pennsylvania Health System. The new building will replace Penn Tower, the circa-1974 building from Geddes, Brecher, Qualls and Cunningham, whose landmark Police Roundhouse remains threatened. When the building opens, Foster’s name will be added to Penn and CHOP’s roster of A-list architects that includes César Pelli, Kohn Pedersen Fox, and Rafael Viñoly.